Accessibility links
Newest Senate Health Care Overhaul Would Increase Uninsured By 22 Million, CBO Says The latest report has similar findings to prior estimates: big increases in the uninsured population, with some deficit reduction. But there's a big caveat: This bill will likely change. 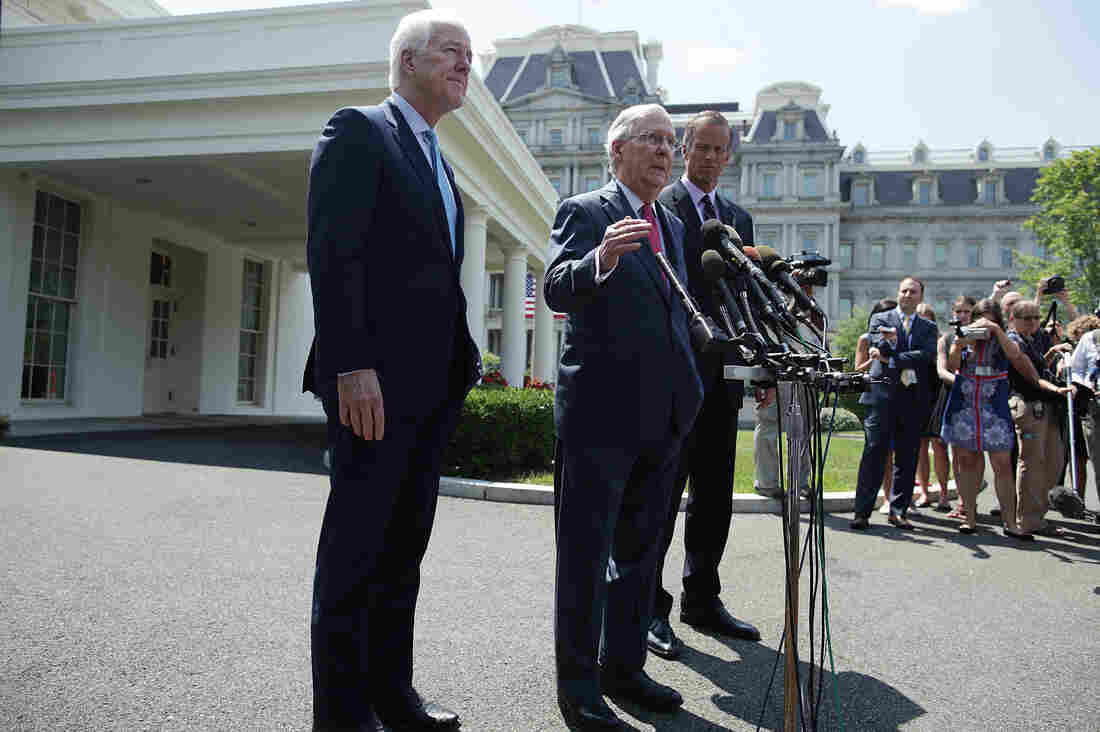 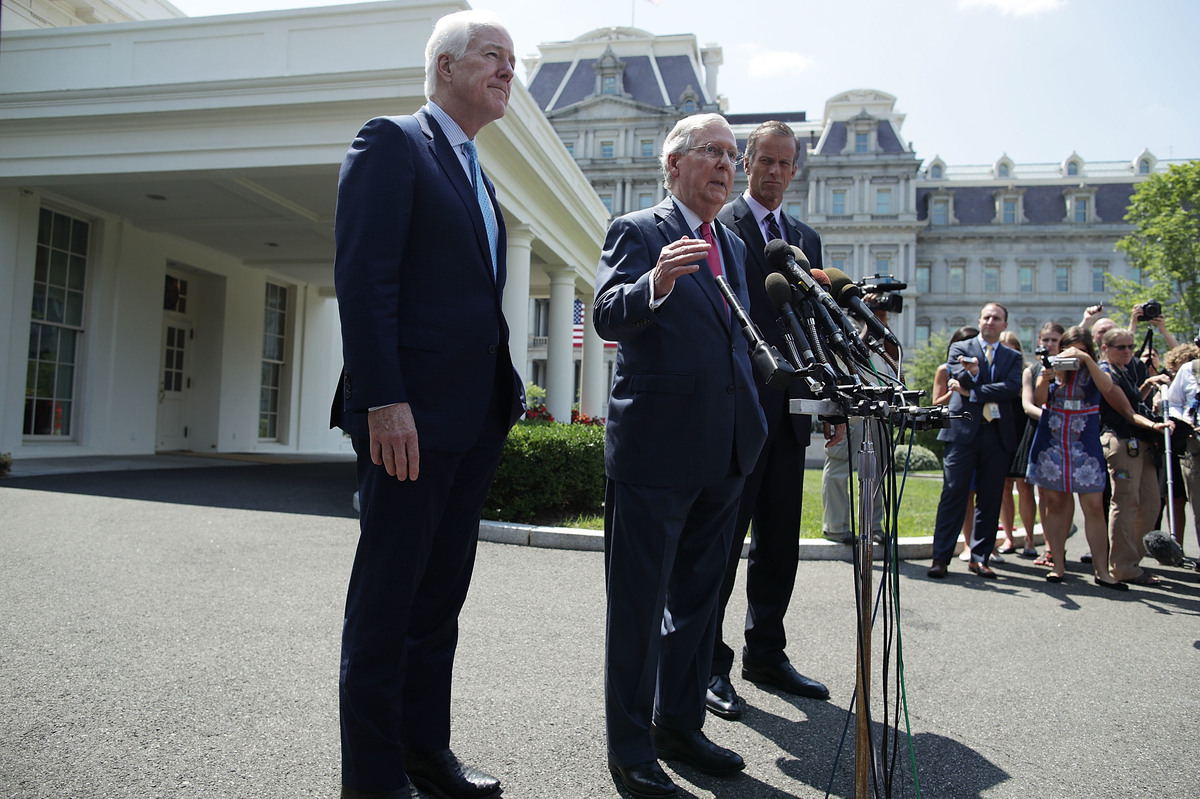 Senate Majority Leader Mitch McConnell, R-Ky. (center), speaks to members of the media with Senate Majority Whip John Cornyn, R-Texas, (left) and Sen. John Thune, R-S.D., outside the West Wing of the White House after a lunch meeting with President Trump on Wednesday.

The Republican scramble to repeal and replace the Affordable Care Act has yielded yet another version of a health care overhaul bill, along with yet another score from the Congressional Budget Office — the second analysis from the nonpartisan agency in two days.

The CBO released its Thursday analysis hours after Senate Republicans posted a new draft, but the updated budget report had a familiar ring to it. The agency found that, like a prior Senate version, the latest bill would increase the number of uninsured Americans by 22 million by 2026. Not only that, but as with all other things health care-related these days, it is likely to change in the near future.

Aside from increasing the number of uninsured compared to Obamacare, Thursday's version would also lower premiums and reduce the deficit. The latest draft would reduce the deficits to greater degrees than the older draft: $420 billion, compared to $321 billion in the previously scored version. It would also reduce average premiums in the Obamacare exchanges by 25 percent in 2026, as opposed to the last version's 20 percent.

The provisions in the latest version of the Senate bill are much like the version scored at the end of June: It would end the individual and employer mandates, it would roll back the Affordable Care Act's Medicaid expansion and cut spending to that program by hundreds of millions of dollars, and roll back some taxes. However, this bill would not roll back Obamacare investment income taxes and payroll taxes that hit higher-income Americans.

Notably, Thursday's bill does not have a provision known as the Cruz amendment, pushed by Sen. Ted Cruz of Texas. That amendment, included in a version of the bill released on July 13, said that as long as an insurer offers an Obamacare-compliant plan, it can also offer noncompliant, less-comprehensive plans.

Two large health insurance industry groups, America's Health Insurance Plans and the Blue Cross Blue Shield Association, called the provision "simply unworkable in any form" and said that it would mean prices go up and millions of people who buy on the individual market will lose insurance.

That's because it could lead to a bifurcated market, in which sick people gravitate to the more comprehensive plans and healthy people choose the skimpier coverage. That could create expensive insurance in the sicker pool, meaning some people would get priced out of that pool, which could drive prices even higher. And that would mean more government spending on premium subsidies, as the Kaiser Family Foundation's Larry Levitt noted on Thursday (meaning the CBO's latest deficit-reduction estimate could see a sizable change with a Cruz amendment).

That amendment could still be added to this bill later, and it would likely change these latest headline numbers — potentially in a big way. A Senate Republican aide told Bloomberg news that the bill didn't include the Cruz amendment because the CBO isn't scoring it yet.

In a call on Thursday, CBO staff said they would evaluate the Cruz amendment, but had no information on when that estimate might be available.

The latest analysis comes just a day after the CBO estimated that a repeal-only bill — without an immediate plan for what would replace the current health law — would increase the uninsured population by 32 million by 2026.

That repeal-only bill is one option Senate Majority Leader Mitch McConnell has placed on the table as a possibility for senators to consider next week.

To proceed on any health plan, McConnell must get 50 senators to vote "yes" on a "motion to proceed" (Vice President Pence would provide the 51st vote needed). That would allow senators to begin debating whatever health care legislation they present.