Accessibility links
Conservative Political Blogger Confirmed For Seat On Federal Appeals Court John Bush's controversial online views on abortion and race were criticized at a hearing last week but did not stand in the way of his Senate confirmation on a party-line vote.

On a party-line vote, the U.S. Senate voted Thursday to confirm President Trump's most controversial judicial nominee to date. 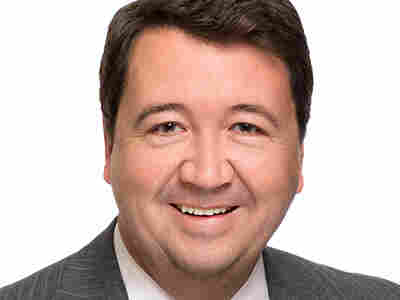 Judicial nominee John Bush was challenged by senators about his conservative views during a committee hearing but ultimately confirmed by the Senate on Thursday. Bingham Greenebaum Doll LLP hide caption

He is John Bush, a Kentucky lawyer and political blogger whose posts disparaged gay rights and compared the Supreme Court's abortion decision in Roe v. Wade to its pro-slavery 1857 Dred Scott decision.

And he is now a judge on the U.S. Court of Appeals for the 6th Circuit.

Blogging under a fake name, Bush posted more than 400 items, often citing alt-right media reports containing conspiracy theories and false information, such as the claim that former President Barack Obama was not born in the U.S.

At his confirmation hearing last week, Bush characterized his blogging as "political activity" and pledged he would not bring his politics on to the bench.

When Bush said he would follow the Supreme Court's decisions upholding a woman's right to terminate her pregnancy, Sen. Dianne Feinstein, D-Calif., reminded Bush that he was under oath. And Sen. John Kennedy, R-La., caustically added that after reviewing Bush's blogs, he was "not impressed."

Shortly after the hearing, a clearly disgusted Kennedy said he did not know how he would vote on the nomination, but on Thursday, he joined the Senate's other Republican members in voting to confirm the nominee.

Few observers thought Kennedy would ultimately vote against Bush's confirmation in view of the fact that Bush is from Kentucky and his nomination was made not just by Trump but behind the scenes by Senate Majority Leader Mitch McConnell of Kentucky. Crossing your own party leader is not something senators like to do, and Kennedy didn't.

The final vote was 51-47, with Sen. John McCain the absent Republican.

Bush is the fourth Trump judicial nominee to win confirmation. Twenty-two nominations are pending. Including those 22, there are 135 judicial vacancies on the federal bench. That is far more than usual. When President George W. Bush left office, there were 54 vacancies. But in the last years of the Obama administration, when Republicans controlled the Senate, they blocked dozens of Obama judicial nominees, accounting for the large number of vacancies now.

Trump has actively sought to name judges who are not only conservative but also young and can serve a long time, quickly erasing and exceeding the gains Obama made in his judicial nominations over two terms.