Accessibility links
U.S. Sanctions Against Russia Never Go Away — They Just Evolve When it comes to sanctions, the Cold War never really ended. As President Barack Obama lifted Soviet-era restrictions, he put in new ones. President Trump could soon find a sanctions bill on his desk. 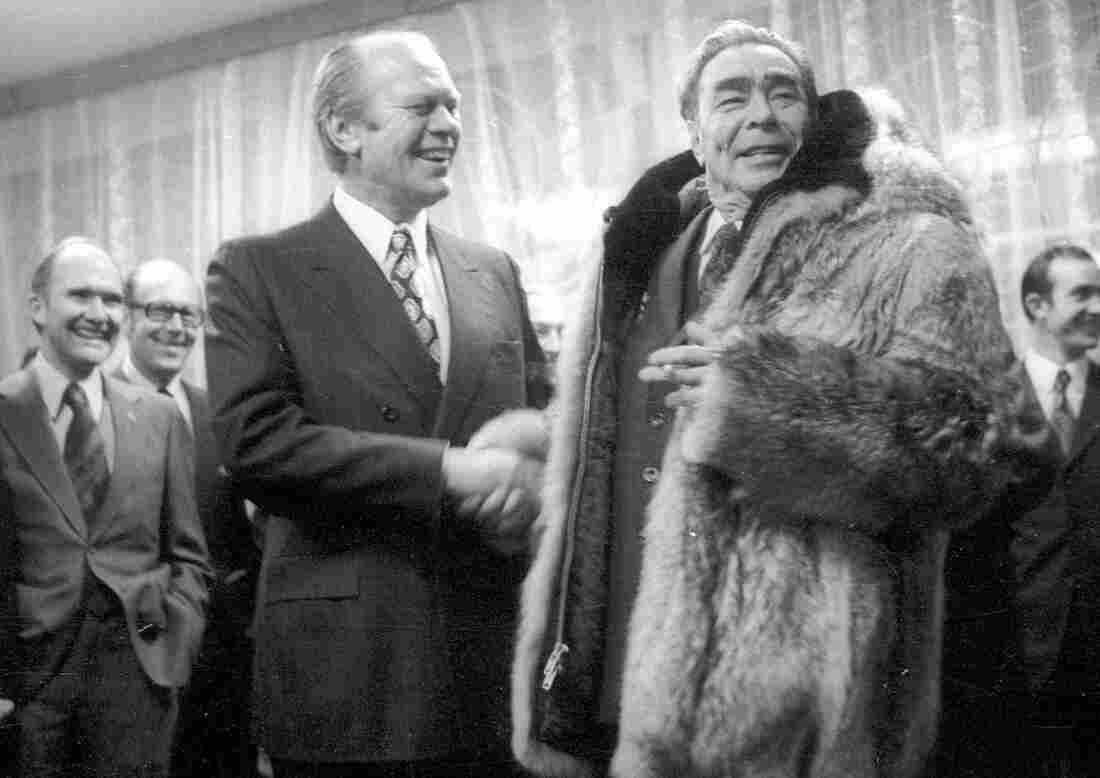 President Gerald Ford shakes hands with Soviet leader Leonid Brezhnev on Nov. 24, 1974, in a meeting in the Soviet city of Vladivostok. Several weeks later, Ford signed a law that would place restrictions on Soviet trade with the U.S. for nearly four decades. AP hide caption 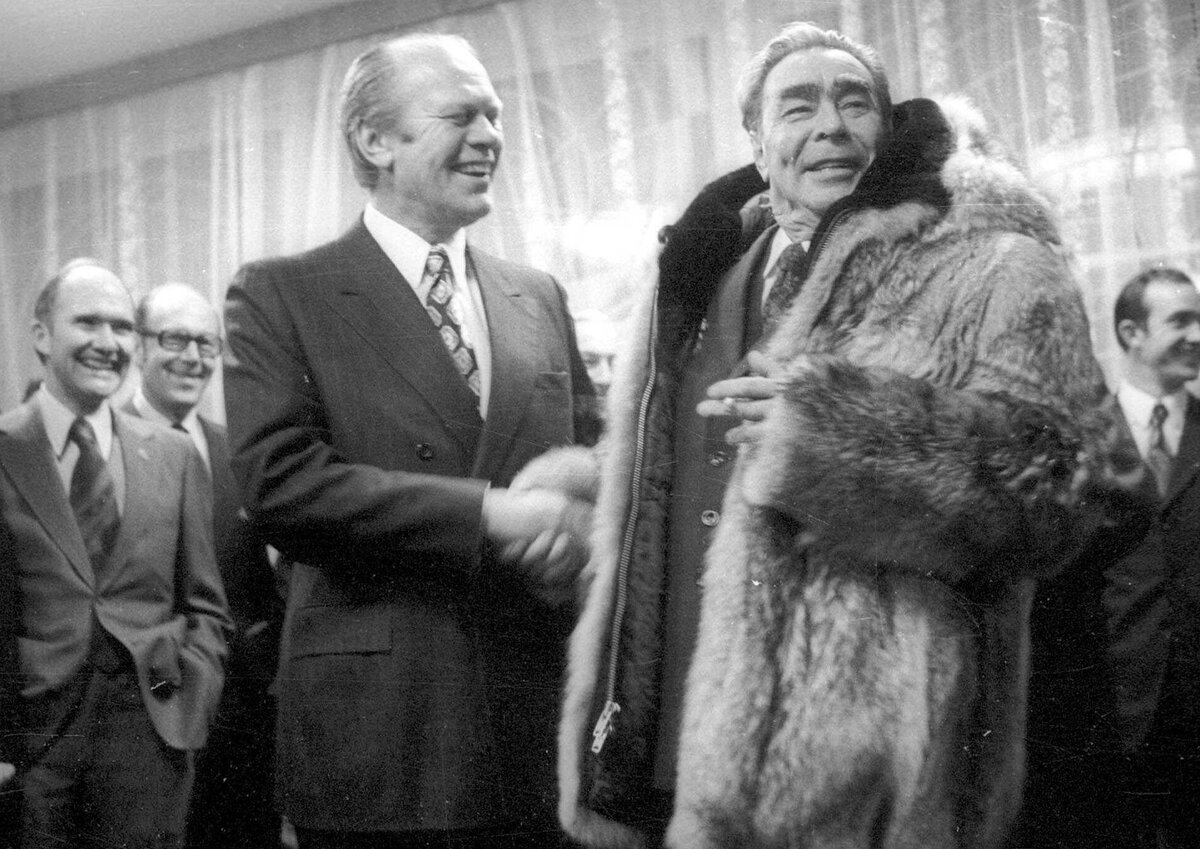 President Gerald Ford shakes hands with Soviet leader Leonid Brezhnev on Nov. 24, 1974, in a meeting in the Soviet city of Vladivostok. Several weeks later, Ford signed a law that would place restrictions on Soviet trade with the U.S. for nearly four decades.

When it comes to U.S. sanctions against Moscow, the Cold War has never really ended.

President Gerald Ford signed off on trade restrictions against the Soviet Union and other communist countries in a 1974 measure known as the Jackson-Vanik amendment, for its congressional sponsors.

The message to Moscow: If you deny basic human rights — in this case, the right of certain people, especially Jews, to emigrate from the Soviet Union — you can't conduct normal business with the United States.

So as one set of sanctions vanished, new ones appeared.

Obama followed up with additional punitive steps after Russia's 2014 invasion of Ukraine and then again after Russia's meddling in the 2016 U.S. presidential election.

Congress now appears poised to add another layer of sanctions in a measure that President Trump would then have to sign into law — or veto.

"I think the legislation is more or less a good thing," said Dan Fried. He was the State Department's sanctions coordinator under Obama, and as a self-described hard-liner on Russia, he favors tougher measures.

"I think the Congress was motivated by a concern that the outgoing Obama administration never responded adequately to the Russian cyberhacking into our elections," he said.

The Senate last month passed the proposed measure 97-2, and the House vote is expected to be similarly lopsided. The bill would give Congress a say in Russia policy if the president sought to lift sanctions unilaterally.

Embroiled in the Russia controversy, Trump has said little about Russian sanctions. He would face pressure to sign a bill with such strong bipartisan support. If he vetoed it, he would face renewed accusations that he is soft on Russia. And Congress could easily override him.

So more sanctions look quite likely. But will they be effective?

But if the aim is to change Russian behavior, then there is little evidence of success and no sign yet that they're potent enough to cripple Russia and force concessions.

The most substantial sanctions package came in 2014, which included steps to block international investment in Russia's energy sector, the most important part of an otherwise anemic economy.

"We saw that the 2014 sanctions have had an impact on Russia in terms of access to capital," said Daniel Yergin, vice chairman of the economics firm IHS and a leading authority on global energy markets. "So the questions is 'will these [proposed] sanctions deter and punish, or will they be counterproductive?' "

Supporters say sanctions need to be measured against Russia's actions over time. But some critics say they've become a distraction and an end in themselves.

For example, U.S. and Russian officials met at the State Department this week to talk about the punishment imposed in December, when the U.S. seized two Russian diplomatic compounds — one outside New York City, the other outside Washington.

Critics say the two countries should be focused on matters like the war in Syria and the turmoil in Ukraine.

"We have to recognize that unilateral sanctions generally don't work," said Richard Morningstar, head of the Global Energy Center at the Atlantic Council. "It's necessary to have the support of allies."

The 2014 energy sanctions against Russia have worked, he said, because the U.S. negotiated them in partnership with the European Union. The current measure under consideration would expand those sanctions but would be put into force only by the United States.

Morningstar also cited the Iran nuclear deal in 2015, which came about after the U.S. persuaded the Europeans and others to stop buying Iranian oil. While Trump and many other Republicans are critical of the nuclear deal, there is a broad consensus that the sanctions helped push Iran to the negotiating table.

"We've learned in the past the difficulty of enforcing unilateral sanctions. And we've learned the hard way," Morningstar said.

The U.S. economy is more than 10 times larger than Russia's, with an annual gross domestic product of more than $18 trillion compared with $1.5 trillion. But the Russian economy is still too large to be severely damaged by U.S. sanctions alone, said David Mortlock, a international trade lawyer who worked on Russia sanctions at the National Security Council during the Obama administration.

"The Russia sanctions program is very different than any other sanctions program," Mortlock said. "On a country like Iran, every twist of the dial was fairly significant. Iran is a large economy, but nowhere near the scale of Russia."

3. How will Putin respond?

So far, the Russian president has pressed ahead with provocative actions despite sanctions.

Fried, the former State Department official, said this is why it's important to step up the pressure.

"Putin is making a calculation that he can lean on Ukraine longer than we can resist," he said. "He may decide to cut a deal when he has concluded that Ukraine and the West will resist effectively. He will not cut a deal if he thinks Ukraine will collapse or we will collapse."