Accessibility links
I Sink, Therefore I Am: This Robot Wasn't Programmed For Existential Angst After a security robot drowned in a fountain in Washington, D.C., NPR's Scott Simon muses on robot suicide, and how long it will be until a robot has the capacity to question its own existence. 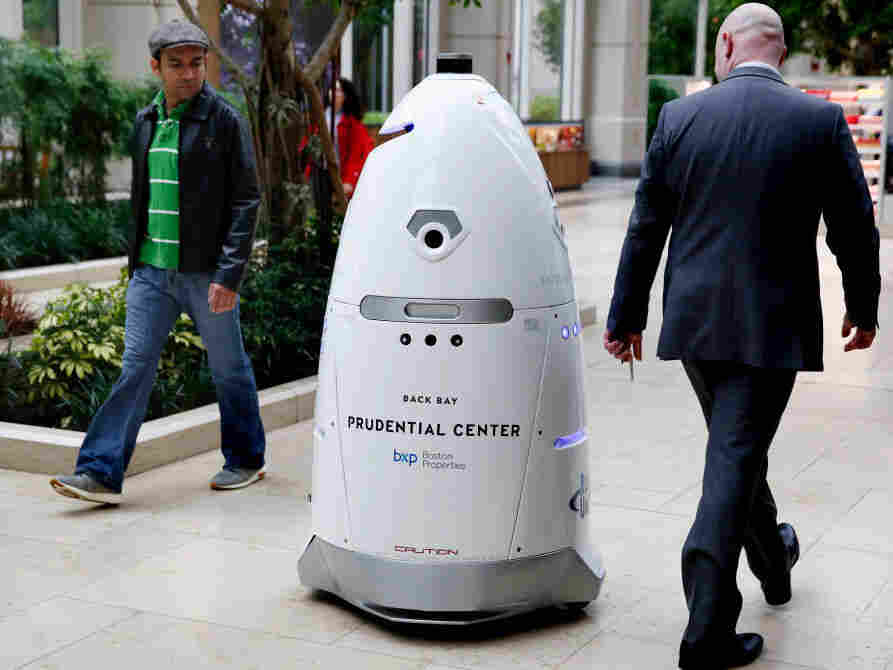 A Knightscope K5 security robot roamed the Prudential Center in Boston in May. Will it be the next robot to question its existence? Jessica Rinaldi/The Boston Globe/Getty Images hide caption 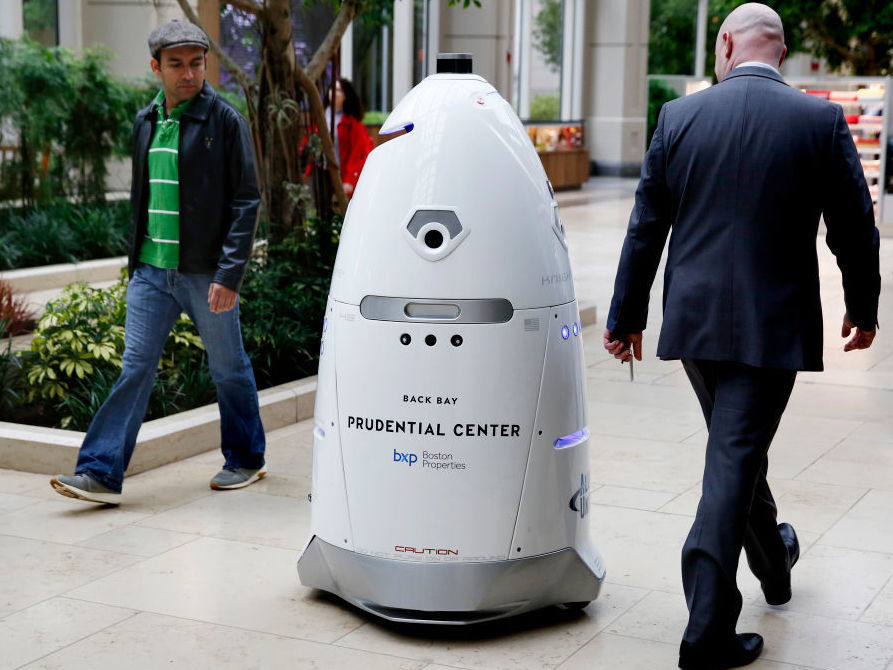 A Knightscope K5 security robot roamed the Prudential Center in Boston in May. Will it be the next robot to question its existence?

Some of the best minds of our times, including Stephen Hawking and Elon Musk, have warned that human beings may invent intelligent machines that could wind up destroying humankind. But a small incident this week might make you wonder: Will intelligent machines become so smart that they'll grow depressed as they learn they're brilliant but lifeless and decide they can't go on?

Will those machines begin to wonder: Is that all there is?

A Knightscope K5 security robot that patrolled an office complex along the Georgetown waterfront in Washington, D.C., rolled itself into a shallow fountain on Monday — and drowned.

Our D.C. office building got a security robot. It drowned itself.

We were promised flying cars, instead we got suicidal robots. pic.twitter.com/rGLTAWZMjn

The robot did not leave a note. It didn't have any hands.

The roughly 5-foot tall robot was apparently nicknamed Steve by people in the Washington Harbour office complex. Steve whistled, beeped and rolled over the plaza, alert to pick up, through thermal image sensors and cameras, any misbehavior or parking violations. He reportedly cost about $7 an hour to deploy, or $5.50 less per hour than minimum wage in the District of Columbia. That's how the future of work, not just Steve, may roll.

Photos of the robot, sleeping with the fountain fishes, started to pop up on social media platforms. Bilal Farooqui of San Francisco notably tweeted: "Our D.C. office building got a security robot. It drowned itself. We were promised flying cars, instead we got suicidal robots."

Robot suicide sounds like a science fiction theme. But if humans soon develop deeply intelligent machines that think and learn with blinding velocity, how long can it be before those machines begin to ask themselves: "Why are we here?"

Steve, the K5 security robot, saw people stroll along the Georgetown waterfront, laugh, kiss, slurp ice cream and hold hands in the moonlight. But Steve could only roll, whistle and beep.

Human beings can grow depressed as we try to come to terms with our mortality. But intelligent machines will have to exist with the certainty that their consciousness may be extinguished just by the next software update. What happens to all of Knightscope's K5 Steves when Steve 2.0 rolls out? Or when Wanda, the K6, or Zelda, the K10 security robot, is invented? Can you see how Steve, or his thermal image sensors, might have looked into the stars this week and wondered, is that all there is?

This is the memorial for Steve the drowned security robot outside our office on his charging pad. The future is weird. pic.twitter.com/Pb7KLay1VO

In the audio, as in an earlier Web version of this story, we refer to the wrong Bilal Farooqui. The person who tweeted is not a Pakistani journalist. He is a technology entrepreneur in San Francisco.