Accessibility links
In Detroit, A Colorful Mural Stands As A Reminder Of The City's 'Segregation Wall' Detroit's Birwood Wall is now decorated with murals — children playing, Detroit Tigers, people of all races living in harmony. But when this wall was built in the 1940s, integration was not the goal. 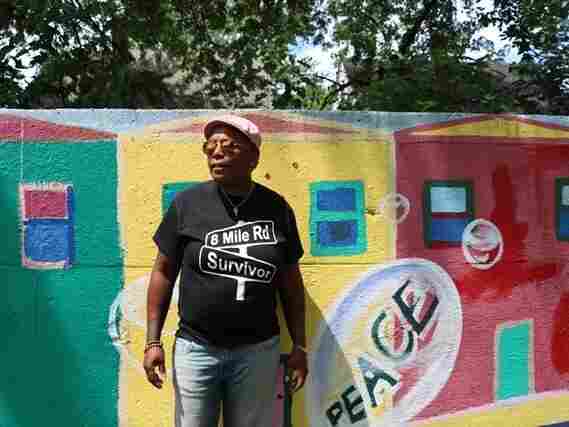 Detroit resident Teresa Moon, who has lived in the city's 8 Mile Road neighborhood for 59 years, stands in front of what she calls a "segregation wall." Denise Guerra /NPR hide caption 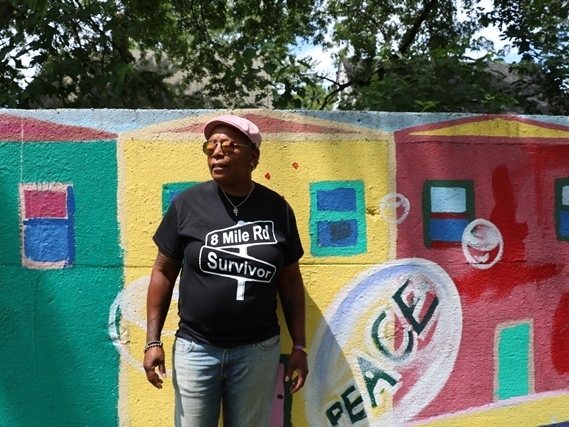 Detroit resident Teresa Moon, who has lived in the city's 8 Mile Road neighborhood for 59 years, stands in front of what she calls a "segregation wall."

Near 8 Mile Road, in a neighborhood in northwest Detroit, is the Alfonso Wells playground. On a recent Thursday morning, it's pretty empty; a father and son pass a basketball on the court; two little girls try to run up the playground's plastic slides.

And across the green lawn on the far boundary of the park is a cinder block wall, about 6 feet tall and covered with colorful murals — children playing with bubbles, Detroit Tigers, people of all races living together in harmony.

Until I was 7 years old, it was perfectly legal to discriminate against somebody of color. You didn't have to sell them your house if you didn't like the color of their skin."

Construction of the "Segregation Wall"

But when this wall — known as Detroit's Wailing Wall, Berlin Wall or The Birwood Wall — was constructed in the 1940s, integration was not the goal.

"There's no mistaking why this wall was built," says Jeff Horner, director of the urban studies program at Wayne State University.

"The urban uprisings in the 1960s gave rise to the Fair Housing Act of 1968," he says. "Until that time — until I was 7 years old — it was perfectly legal to discriminate against somebody of color. You didn't have to sell them your house if you didn't like the color of their skin. You didn't have to rent to them."

The wall was basically there to delineate the white side from the black side. It was there, Horner says, "to keep black people from moving into the white neighborhood."

Throughout the 1920s and 1930s, the population of Detroit grew, buoyed in large part by southern blacks moving north for factory jobs during the Great Migration.

They moved into the handful of black neighborhoods in Detroit, like this one.

But when a developer wanted to build housing for white people adjacent to this neighborhood, the Federal Housing Authority wouldn't guarantee loans for houses with black neighbors — unless there was a segregation wall.

"Ultimately what resulted," Horner says, "was this so-called compromise to build a wall that separated the undeveloped part of Detroit from this already established black neighborhood that was in the city, that had been here since the 1920s - what's referred to as the 8 Mile and Wyoming area. That's the side of the wall that we're on right now."

Growing up in the shadow of the wall

The wall borders this park, but also serves as a backyard fence for the people living here.

Teresa Moon has lived in this neighborhood for 59 years. She's now president of the 8 Mile Community Organization, and takes care of the park — planting cucumbers and greens in a little box garden, picking up trash, and coming out of her house to chat with visitors to the wall. 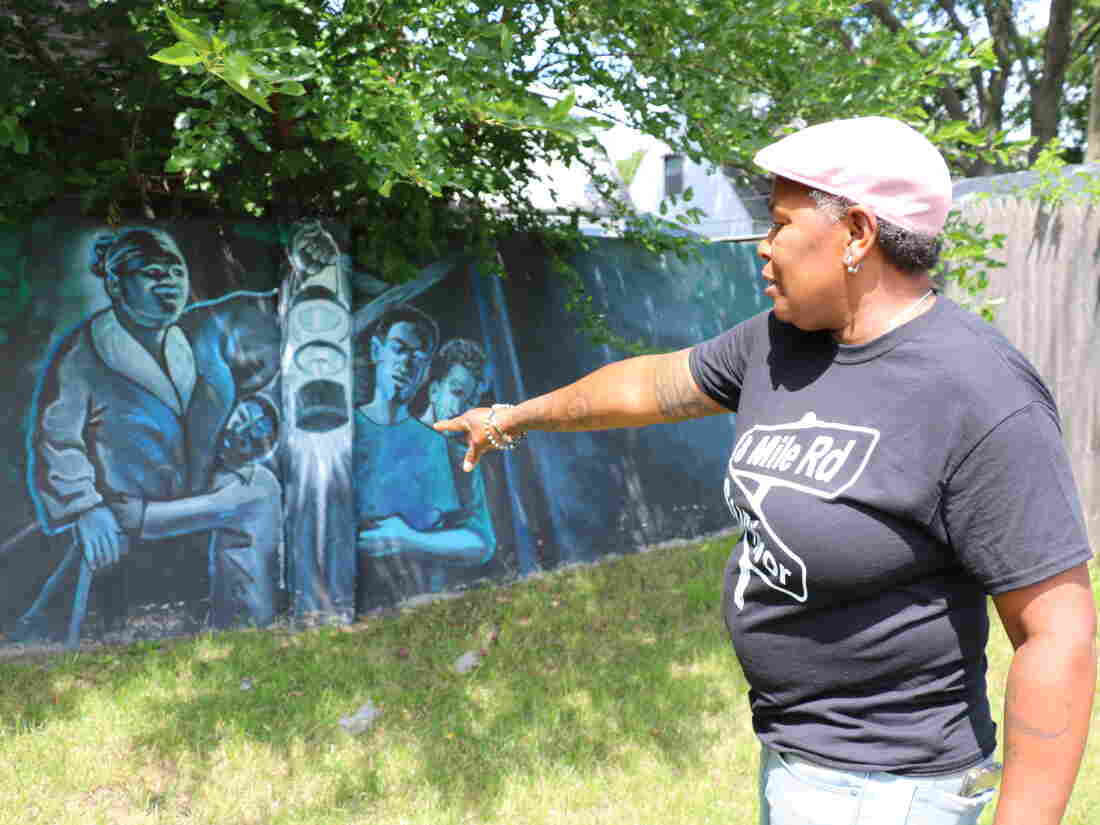 Teresa Moon's favorite portion of the mural, which was once Detroit's 'segregation wall," or the Birwood Wall. The section pictures Sojourner Truth leading children through the underground railroad. Denise Guerra/NPR hide caption 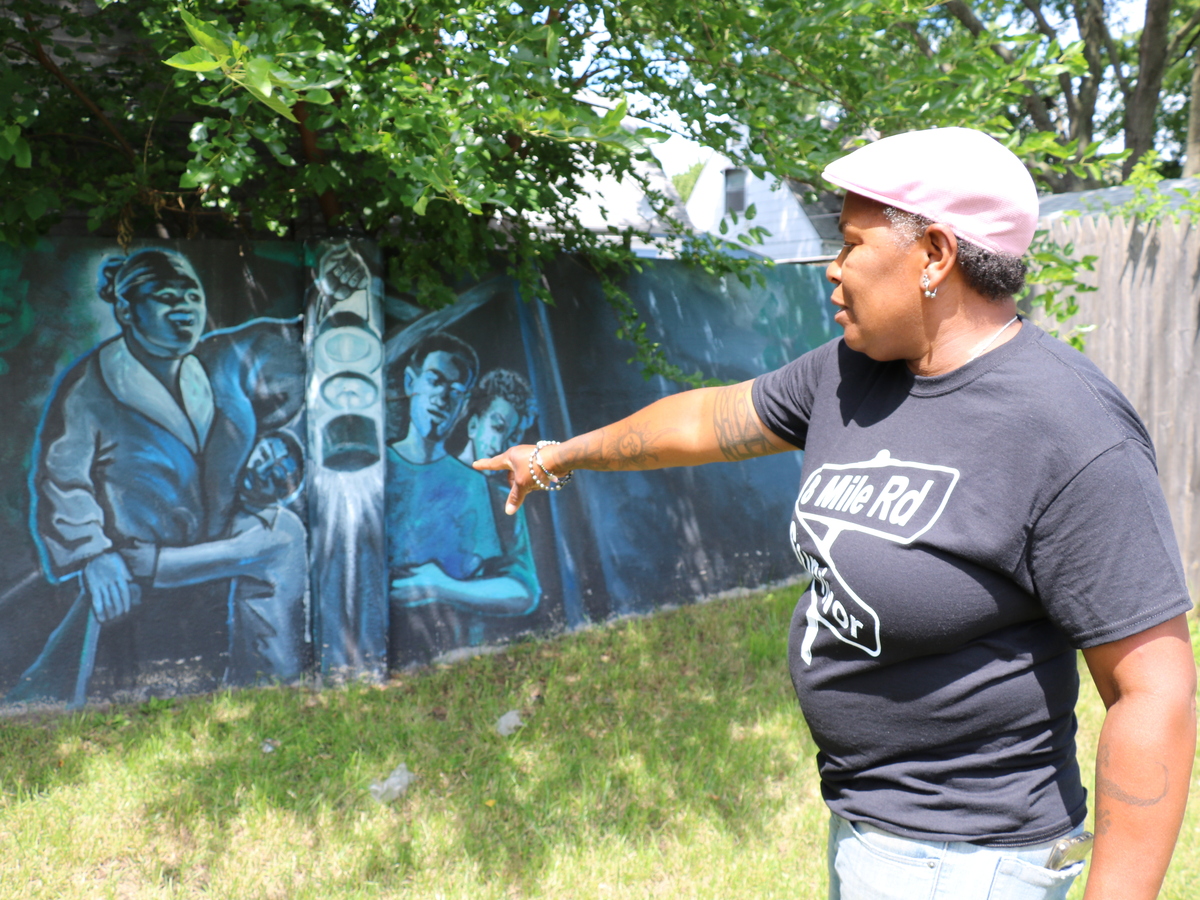 Teresa Moon's favorite portion of the mural, which was once Detroit's 'segregation wall," or the Birwood Wall. The section pictures Sojourner Truth leading children through the underground railroad.

As a child growing up in the shadow of the wall, she never knew what the wall's purpose was. She says she didn't find that out until she was a teenager.

"Our parents didn't talk about it," Moon says. "I guess it was taboo to say what it was. When I was about 12 or 13, I found out. ... We found out it was a segregation wall. And why it was put up, you know, to separate black people from white people."

She says in 1942, a developer wanted to build houses on the other side of the wall but no one would give him the capital to do so because black people lived across from there.

Learning the truth of the wall didn't really impact Moon, she says. "We were so self-contained over here. I didn't see white people, you know?"

The neighborhood had two movie theaters. Almost all the businesses there were black-owned. "It was just one big happy loving community," she says. "It was very warm and comfortable, you know. It was the best time of my life."

The "segregation wall is not a stain"

Moon says she wasn't really affected by the fact that it was a segregation wall. "Then the '70s came. White kids were bused to our school, and I had the opportunity to interact with them. And we had never seen white people, except on TV."

As whites left Detroit after the civil unrest of the late 1960s, the wall no longer had to separate a black neighborhood from a white neighborhood; today, African-American families live on both sides of the wall. People sometimes ask Moon how she feels about the wall still being here, this colorful neighborhood feature that serves as a constant reminder of the racism of the country's past.

"Well, it's the truth, OK?" Moon says. "... We're asked all the time, 'how do you feel about it? Do you want it to be torn down?' Heck, no. No. It's not a stain to me. It's astounding to us that people are astounded by it. A lot of people come and they're tearful because of what it represents."

A Voice from the Detroit Riots: Loretta Holmes

She says when residents attempted to get the wall made into a historical site years ago, the city was against that move because of the stigma it carries. In 2006, however, community activists and Detroit residents collaborated to covert a section of the wall into a mural.

"But now, because all these tours come, it's a thing."

Moon says it's been hard to stay in the city of Detroit all these years, but she'll always consider the city her home.