Accessibility links
Book Review: 'Caesar's Last Breath,' By Sam Kean Sam Kean's funny, conversational new book reminds us not to take the air we breathe for granted — our atmosphere can tell stories about everything from dinosaurs and Julius Caesar to space flight.

'Caesar's Last Breath' Is A Breezy History Of Our Atmosphere

'Caesar's Last Breath' Is A Breezy History Of Our Atmosphere 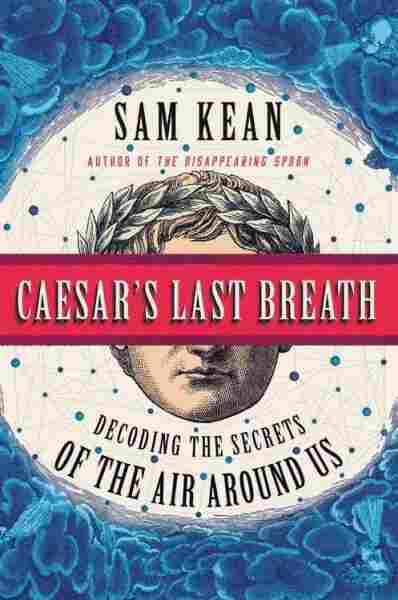 Decoding the Secrets of the Air Around Us

In Sam Kean's previous nonfiction books, The Disappearing Spoon and The Violinist's Thumb, the bestselling pop-science writer tackled the topics of the periodic table and DNA, respectively. His new book, Caesar's Last Breath, goes after something equally as essential. Subtitled Decoding the Secrets of the Air Around Us, it's a conversational and illuminating view of the history and inner workings of Earth's atmosphere — what comprises it, how we've harnessed it for better and for worse, and what it means to us going forward as a civilization.

People tend to take air for granted, but as Kean will persuade you, its invisibility and odorlessness — and, at times, its visibility and smell — hold clues to history. He uses the volcanic eruption of Mount Saint Helens in 1980 as a gateway to explore the previous atmospheres that Earth has harbored over its existence, a past he vividly describes as "a place where megabubbles of poisonous gas broke free all the time and stalked the landscape like supernatural terrors." From there he meanders through a variety of subjects — anesthesia, steelmaking, refrigeration, gas warfare, atomic testing — while putting on his well-worn storyteller hat. He tells alternatingly horrific and comic tales about World War I's ominous Operation Disinfection as well as how Charles Dickens' Bleak House stirred up a huge controversy about, of all things, oxygen.

Like all good pop-science books, 'Caesar's Last Breath' strives to strike a balance between erudition and approachability.

The Enlightenment, with its often mad rush toward new discoveries, is a particularly fertile era for Kean. He charmingly renders a host of characters, like the brothers Joseph-Michel and Jacques-Étienne Montgolfier, the pioneering 18th-century balloonists whose "cloud in a paper bag," as Joseph called it, revolutionized our understanding of gases and the field of chemistry itself. On a less sublime note, the book relates the dubious life's work of Joseph Pujol, more famously known as La Pétomane — the Fartomaniac — a stage performer in fin de siècle France who used his anus to do impressions and even sing. As off-putting as Pujol's story is, Kean smuggles in a deeper lesson about the human body's incredible capacity to interact with air. And the colorful William Morton, an innovator in administering ether to surgery patients, jumps off the page as the quintessential 18th-century hybrid of hustler and scientist.

Like all good pop-science books, Caesar's Last Breath strives to strike a balance between erudition and approachability. For the most part, Kean breezes through each chapter with a conversational, occasionally humorous tone, lightening jargon and hard science with lively anecdotes and vernacular. Sometimes, though, he does so to a fault — at one point in the Montgolfier story, he writes about how "enthusiasm beat book-learnin'," and later mentions that Pujol retired from his fart-based stage show to become a baker who "apparently made the best bran muffins around." It's as though he's trying to make science as approachable as possible by sounding as unscientific as he can — an admirable goal, except for when it undercuts his otherwise authoritative voice. And the structure of the book feels scattershot, skipping from topic to topic without quite enough connective tissue — but what it lacks in comprehensiveness it more than makes up for in gleeful energy and curiosity.

Caesar's Last Breath ends not in the past, but in the future, with some dazzling speculation about what might go through the minds, not to mention the bodies, of the first space travelers to inhale the air of a planet beyond our solar system. Kean named the book after another thought experiment: What percentage of the molecules in Julius Caesar's last breath — gasped during his assassination in 44 BC — are currently in your lungs, after having circulated throughout the atmosphere for centuries? He uses that experiment to drive home a simple yet profound point: The air we breathe doesn't only sustain us, it connects us.