Accessibility links
The Enduring Legacy Of Jane Austen's 'Truth Universally Acknowledged' Linguist Geoff Nunberg describes the opening sentence to Pride and Prejudice as a "masterpiece of indirection" that is frequently repurposed, but whose irony is never matched. 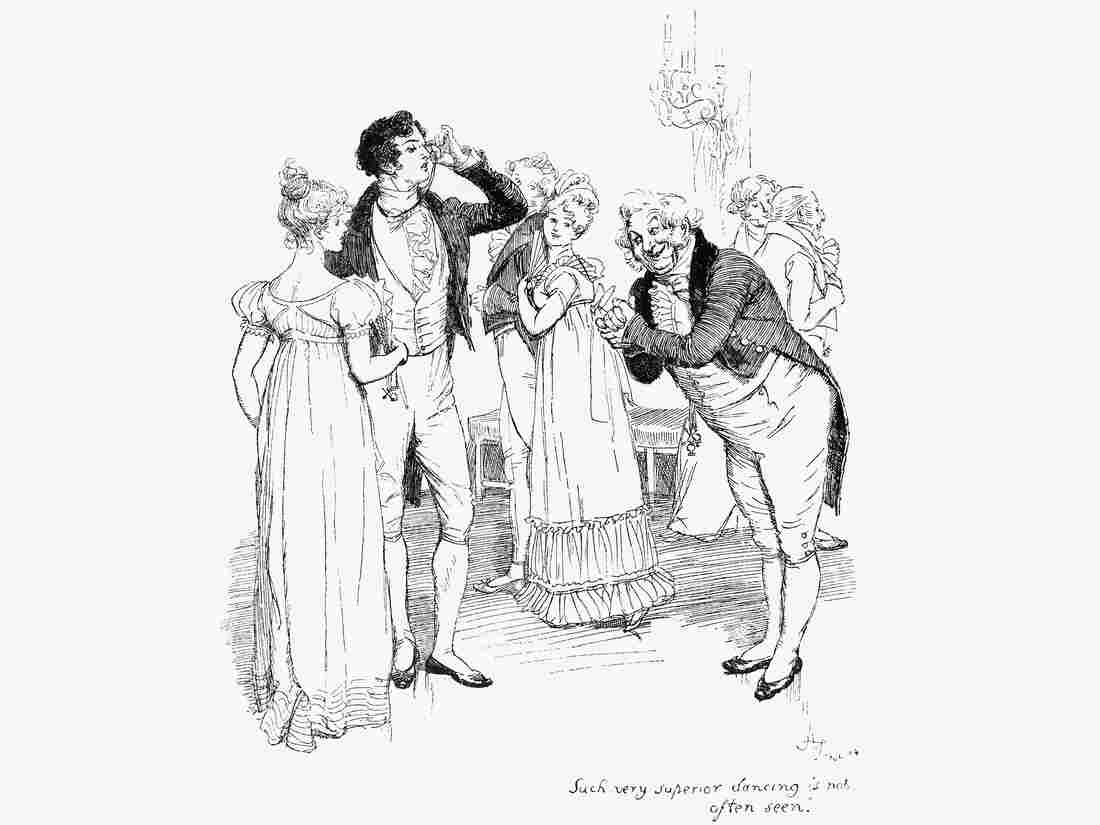 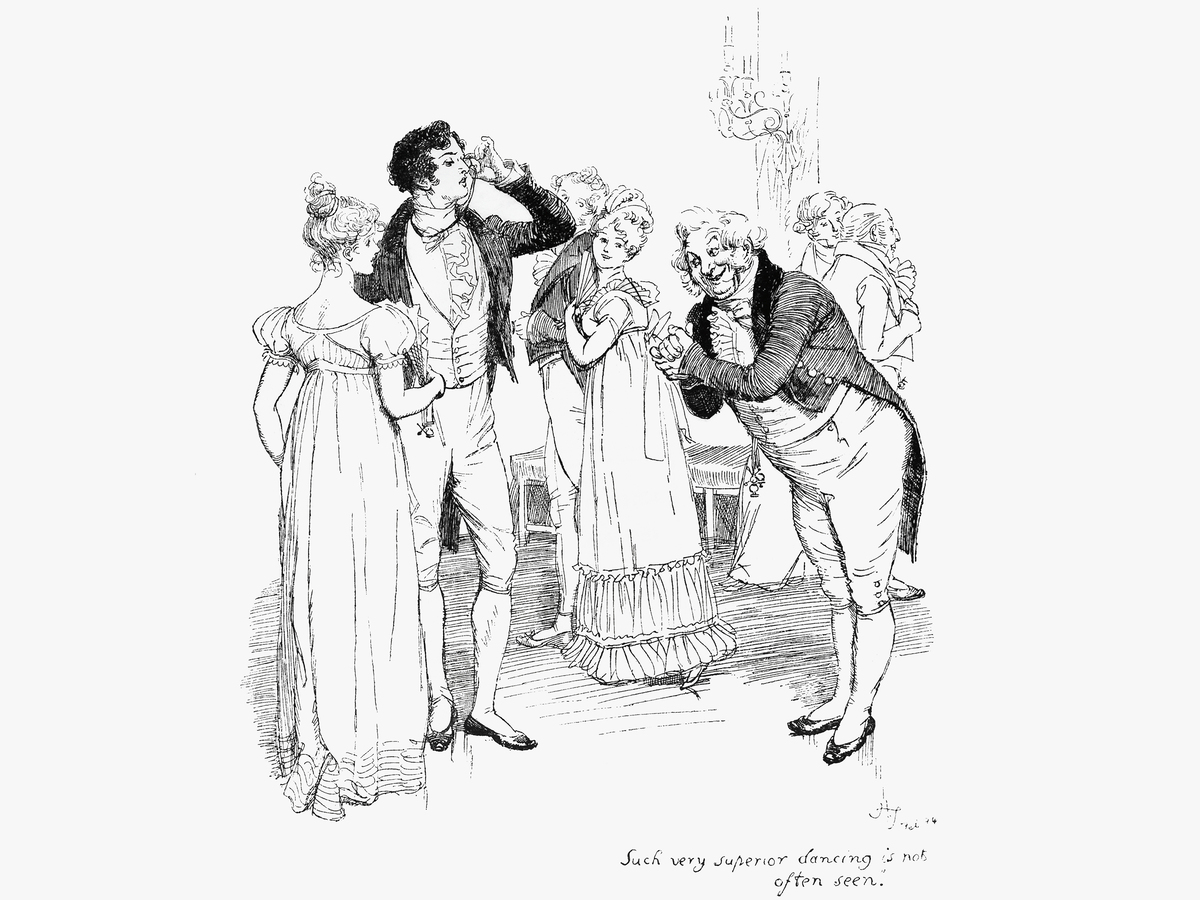 An 1894 engraving depicts chapter 18 of Jane Austen's Pride and Prejudice.

Geoff Nunberg (@GeoffNunberg) is a linguist who teaches at the School of Information at the University of California at Berkeley.

Shortly after Amazon introduced the Kindle, they put up a page with a ranked list of the most frequently highlighted passages across all the books. It's not there anymore, but when I first looked at the list in 2013, the opening sentence of Pride and Prejudice was in third place. That was all the more impressive because eight of the other top 10 finishers were passages from the Hunger Games series, which was the hit of the season that year, as Austen's novel had been exactly 200 years earlier.

"It is a truth universally acknowledged, that a single man in possession of a good fortune, must be in want of a wife."

We can argue about whether that's the most famous first line in English literature or whether the honor belongs to the opening sentence of Moby Dick or A Tale of Two Cities or 1984. But there's no other opening sentence that lends itself so well to sampling, mash-ups and adaptation.

If you're looking to add a literary touch to your article on pension schemes or emergency contraceptives, you're not going to get very far with "Call me Ishmael." But "It is a truth universally acknowledged" is always available as an elegant replacement for "As everybody knows" when you want to introduce some banal truism.

The phrase is ubiquitous in the age of Jane-o-mania. Rummage around on the Internet and you'll learn that it is a truth universally acknowledged that a "pop star in possession of a good fortune must be in want of baubles," that business class is more comfortable than economy, that "online dating sucks" and, needless to say, that Jane Austen "has left quite a mark on pop culture."

Here's the puzzling thing. Those adaptations of Austen's sentence are almost never ironic or facetious. They only underscore the prevailing wisdom, rather than throwing it into question.

Yet my guess is that a large portion of the people who adapt that sentence know perfectly well that the original version is anything but straightforward. It may be the single most celebrated example of literary irony in all of English literature. Pick up a paperback of Pride and Prejudice at a garage sale and it's even money you'll find the first sentence underlined with "IRONY" written in the margin.

Jane Austen's 'Pride And Prejudice' At 200

The sentence may look like a truism, but the first part actually undermines the second. In her book Why Jane Austen, Rachel Brownstein points out that if the novel had begun simply with "A single man possessed of a good fortune must be in want of a wife," we'd snuggle in for a stock romantic story. We might expect the next sentence to describe an aristocratic Colin Firth lookalike galloping full-tilt toward the Bennets' house at Longbourn.

But prefacing that clause with "It is a truth universally acknowledged" implies that's only what most people say they believe — after all, if everybody really does accept it, why bother to mention the fact? In fact, as Austen says in the following sentence, nobody really cares what the wealthy man himself thinks he needs. There's only one truth that matters to Mrs. Bennet and the other families in the neighborhood — that a daughter who has no fortune must be found a well-to-do husband to look after her, which Mrs. Bennet has made "the business of her life."

But we suspect that Austen has her reservations about that single-minded pursuit of an advantageous marriage, even if she doesn't say so outright. And we're flattered to think that she counts on astute readers like us to pick up on that, while others will miss it. It makes us feel complicit with her. As the modernist writer Katherine Mansfield wrote in 1920, "every true admirer of [Austen's] novels cherishes the happy thought that he alone — reading between the lines — has become the secret friend of their author." (That pronoun "he" gives us a start now, but bear in mind that back then the most prominent Austen devotees were the male literati of the Bloomsbury set.)

Austen's sentence is a masterpiece of indirection, and it's no wonder that people keep trying to repurpose it in the hope that they can pluck it from its original context and its irony will somehow cling to its roots. But that can't happen without the covert wink, the tip-off to the sharp reader that the truth isn't as pat as the rest of the sentence makes it seem. Otherwise, the phrase is an empty gesture. It merely signifies irony, the way an empire waistline or a neck cloth signifies Regency gentility.

OK, it's just a sentence. But it points to what always happens when Austen is repackaged for export. There have been some wonderful stage, film and TV adaptations of Pride and Prejudice over the years. But as charming as they are, they can only depict the second half of that opening sentence, the Colin Firth bits. We get a beguiling story of romance and courtship. But we don't see it at Austen's skeptical remove. We miss the arched eyebrow, the sly and confiding voice.

That's the paradox of Austen's novels. Like the opening sentence of Pride and Prejudice, they cry out for adaptation. They seem infinitely resilient: You can relocate them to Beverly Hills or Delhi; rewrite them as murder mysteries or erotica; populate them with vampires or zombies — they'll always retain some trace of their original appeal. Yet there are few other novels so unwilling to give up their souls.