Accessibility links
Democrats Want To Probe Trump Ties To Deutsche Bank. GOP Says, No Thanks President Trump has a special relationship with Deutsche Bank. Democrats on the House Financial Services Committee wanted a probe of the German bank. Republicans said no. Here's the back story.

Democrats Want To Probe Trump Ties To Deutsche Bank. GOP Says, No Thanks

Democrats Want To Probe Trump Ties To Deutsche Bank. GOP Says, No Thanks 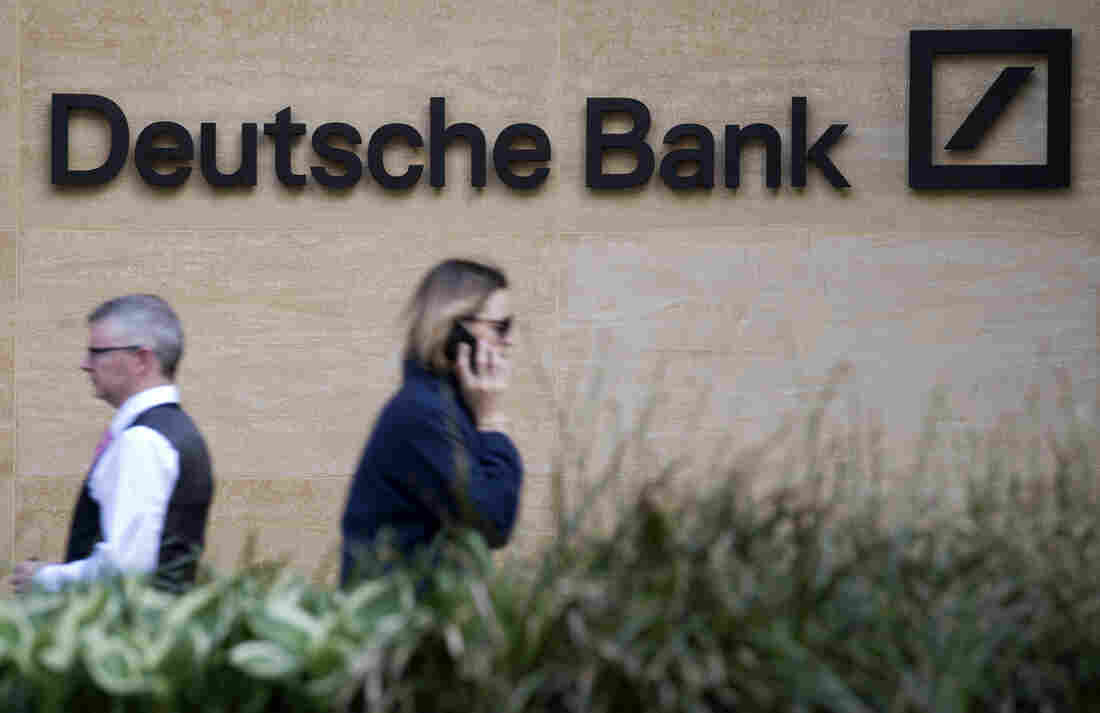 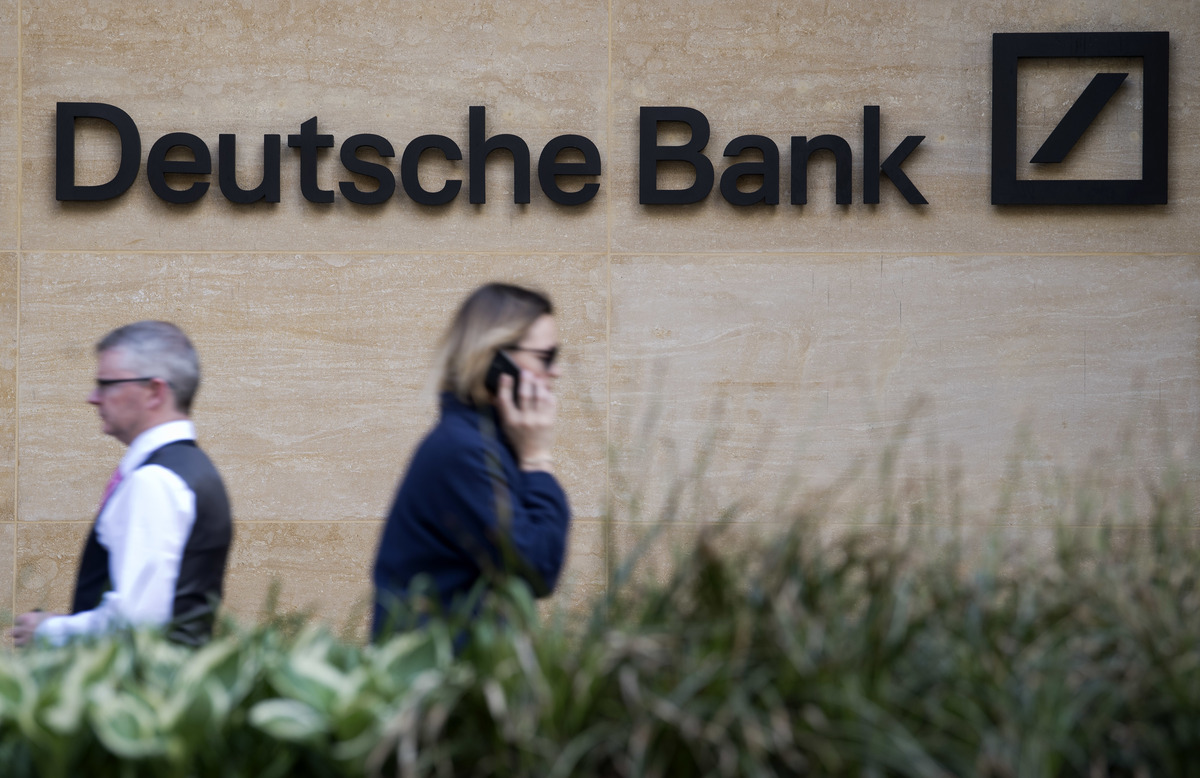 Earlier this year, Frankfurt, Germany-based Deutsche Bank paid a $425 million fine for its involvement in a money-laundering scheme with Russian clients.

The House Financial Services Committee on Tuesday considered looking into President Trump's financial ties, particularly those linking him to a bank that had been involved with laundering Russian money.

But Republican members voted "nyet" on a straight party-line vote of 34-26.

The committee, which deals with banking and money laundering, "will not be spending time and money" on an investigation that already is being touched upon by other congressional committees, said Chairman Jeb Hensarling, R-Texas.

The Senate and House intelligence committees and the Senate Judiciary Committee have all been looking at some aspects of Trump interactions with Russians. Hensarling called the effort to launch yet another investigation "blatantly political."

But Rep. Ed Perlmutter, D-Colo., urged passage of the bill known as a "resolution of inquiry," a rarely used measure that allows Congress to request documents from the executive branch. He said an inquiry is needed because it's clear "the president has something to hide when it comes to his financial dealings with the Russians."

Perlmutter said his "suspicions" have increased in recent days because "the president has threatened to fire not only Mr. (Robert) Mueller, the special counsel, but also his attorney general, Mr. (Jeff) Sessions because of the probe into Mr. Trump's and his family's financial dealings with the Russians."

Committee Democrats had been pushing for a broad inquiry, but with a special focus on Trump's dealings with Deutsche Bank. Earlier this year, the Frankfurt, Germany-based bank paid a $425 million fine for its involvement in a money-laundering scheme with Russian clients.

To better understand why a German bank has turned up in the middle of a controversy involving an American president, here is an explainer:

Deutsche Bank, founded in 1870 in Germany, is an enormous financial institution, which S&P Global Intelligence's ranks as No. 15 in the world in total assets. In 2016, 18 percent of Deutsche Bank's capital was in the United States.

But the company frequently gets into legal trouble. For example, just last week, it agreed to pay $77 million to end U.S. antitrust litigation in a case involving manipulation of interest rates.

What does a German bank have to do with a U.S. president?

Deutsche Bank and Trump have a long relationship. It started after Trump went through a series of bankruptcies in the early 1990s, and U.S. banks did not want to lend to him.

Deutsche Bank then stepped in as his go-to banker. A New York Times review of security filings estimates that over the past 20 years, Deutsche Bank has given Trump $4 billion in loan commitments and potential bond offerings.

Where do those loans stand today?

While most of the loans have been paid back, Trump's most recent financial disclosure shows he still has at least $150 million in outstanding debts to the bank.

Many people have loans. So what if Trump owes money to a bank?

For a president, any debt can create a conflict of interest, according to Norm Eisen, who served as the White House ethics adviser to President Barack Obama. He says debts raise questions about whether a president is making policy decisions based on a desire to get favorable terms from his lenders.

"When I was working for President Obama, we wouldn't even let him refinance his modest home in Chicago because of the appearance of conflict," Eisen told NPR.

But Deutsche Bank is particularly problematic because it's so often in legal trouble. Since 2015, the bank has stacked up more than $9.2 billion in fines, penalties and settlements, according to monitoring by the Capital Performance Group. If Trump owes the bank a great deal of money, the question might arise: Would his administration back off tough regulatory enforcement so that the president can get better personal lending terms from Deutsche Bank?

Yes, according to news reports. For example, The Guardian says Mueller wants to see an internal report done by Deutsche Bank itself. Several months ago, the bank did an internal review to determine whether any of Trump's loans were connected to Russia or backed by the Russian government, the report said.

Also, New York regulators want to know whether loans made by Deutsche to Trump could expose the bank itself to heightened risk, The New York Times said.

What does the president have to say about all this?

In a recent interview with the Times, reporters asked whether it would cross a line for Mueller to examine his personal finances. Trump said it would, calling it a "violation."

Trump has made it clear that he objects to Mueller, congressional investigators or banking regulators looking into his personal finances and loans.

Do other Trump family members owe money to Deutsche Bank?

Jared Kushner, the president's son-in-law, secured and personally guaranteed a $285 million loan from Deutsche Bank in October 2016, as the The Washington Post first reported in June.

The loan came right before the election and just as Deutsche bank was settling the Russian money-laundering case with the New York regulators. Kushner did not include the loan on his financial disclosure form filed with the Office of Government Ethics in March nor was it listed on his updated form released last week.

The financial disclosure also shows Kushner has a $5 million to $25 million open line of credit from Deutsche Bank, which he shares with his mother.