Accessibility links
An NYC Scout Troop Provides Homeless Girls A Place Of Their Own The 28 members of Girl Scout Troop 6000, and its two co-leaders, live in a shelter in Queens, N.Y. The troop that Giselle Burgess started is the first specifically for girls who are homeless. 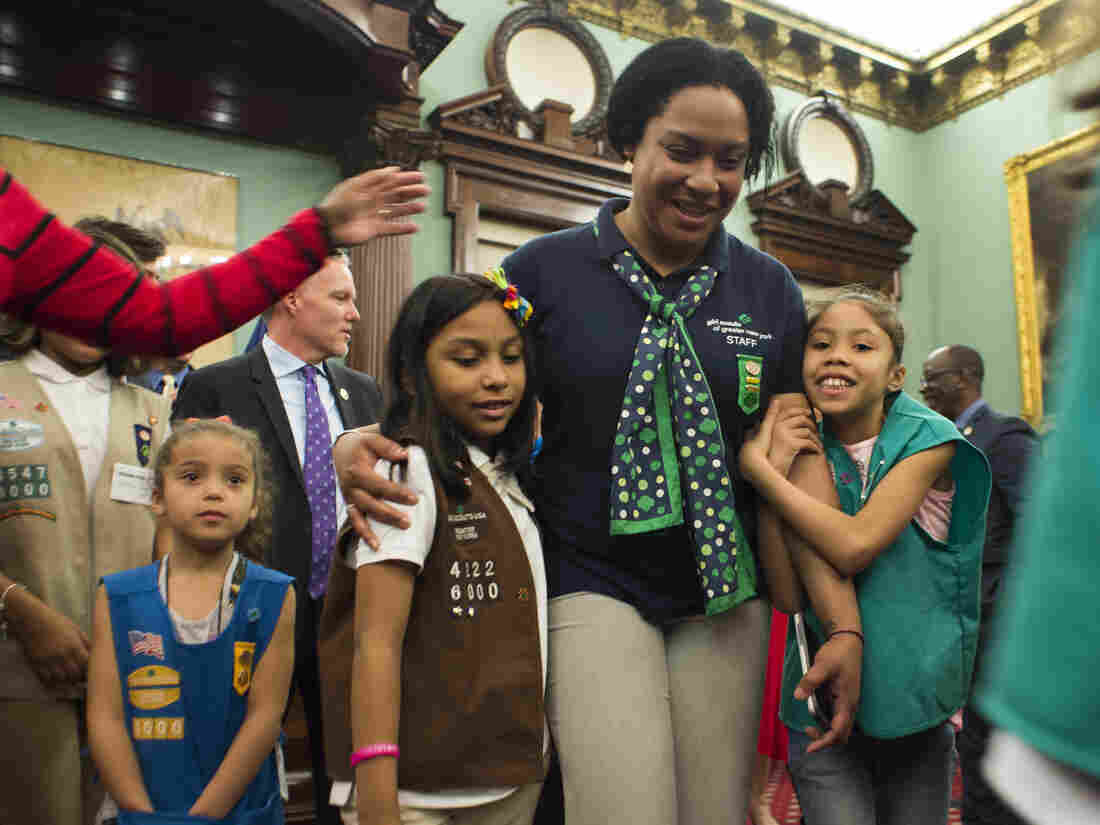 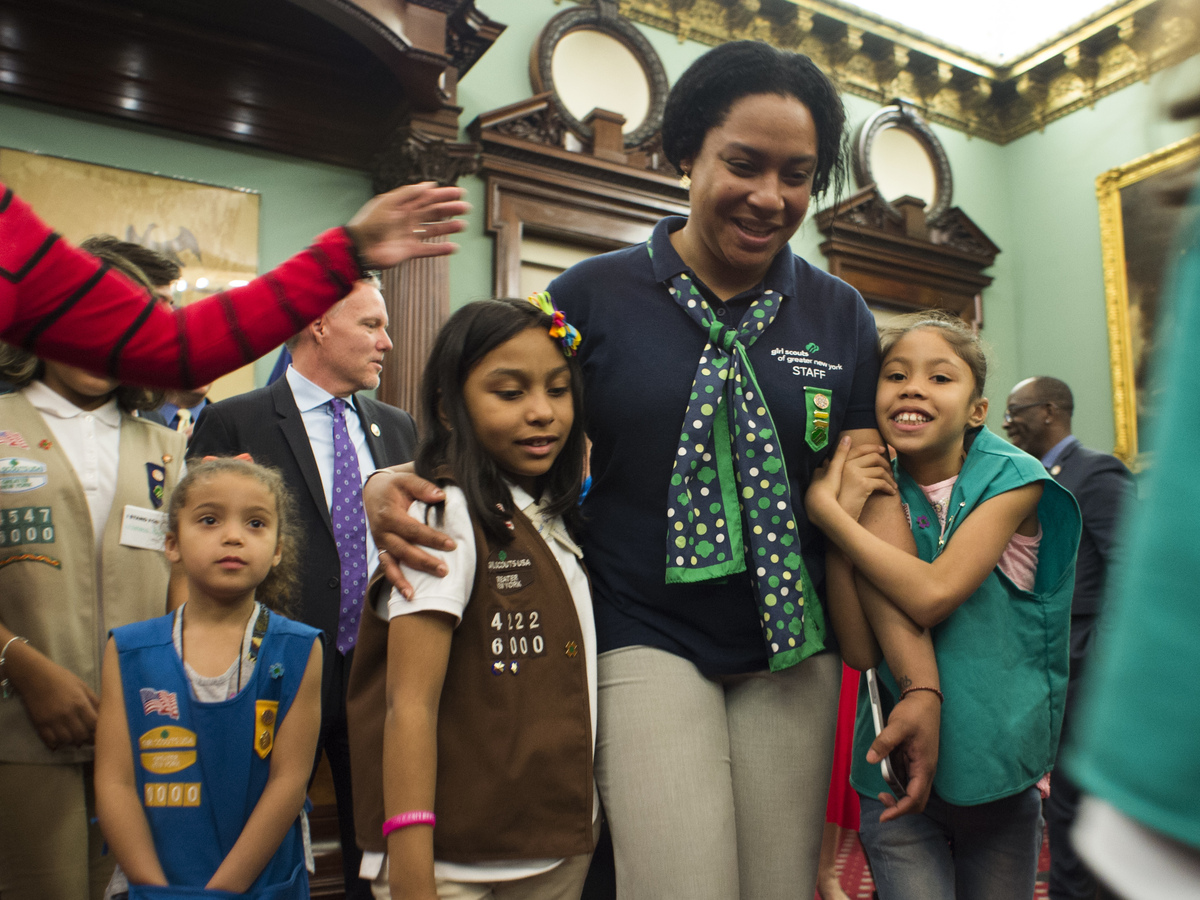 Members of Girl Scout Troop 6000 troop and leader Giselle Burgess hug after being honored as the first troop exclusively for homeless girls, at a ceremony at New York City Hall on April 25.

On a recent camping trip, the itinerary for Girl Scout Troop 6000 was full of only-in-the-wilderness activities for these New York City kids. At a campground upstate, the girls — age 5 to 15 — milked cows and roasted marshmallows, and screamed when a moth flew by or someone found a spiderweb in the bathroom.

At the end of the trip, the girls left the cabins where they'd stayed and returned to the closest thing they have to a home: a 10-story budget hotel in Queens, where New York City's Department of Homeless Services pays to shelter homeless families.

All 28 of the girls in Troop 6000 live at the hotel. They're members of the first-ever Girl Scout troop for girls who are homeless.

"I try to stress the fact that they are just like any other Girl Scouting troop," says Giselle Burgess, who started Troop 6000 in February. "The only difference between us is at the end of our meetings we are still in the same location."

A School That Provides The One Constant In Homeless Children's Lives

Burgess is a single mom with five kids, ranging in age from 3 to 14. Last year, her landlord decided to sell the building where she had an apartment. Burgess couldn't find a new place to live — she says potential landlords were wary of taking a single mom with that many kids — and entered the city's shelter system.

Now, the family of six shares one room and two beds.

"As far as, privacy between myself and the children, we get a little bit overwhelmed at times because you don't have your own space," Burgess tells NPR's Steve Inskeep. "But we're making it work."

When she became homeless last August, Burgess was working for the Girl Scouts of Greater New York as a community development specialist. She helped start new troops and recruit new Girl Scouts. Burgess asked if she could start a troop in her shelter, and the response was an enthusiastic yes, she says.

When people think about homelessness, Burgess says, they "think about the man on the corner who came from out of state and has the cardboard sign."

"I think my biggest goal here is to try to break that stigma of homelessness," she says.

So the troop, which includes three of Burgess' daughters, does what other Girl Scout troops do. They've practiced first aid, studied women's suffrage and learned about STEM careers.

As The Number Of Homeless Students Soars, How Schools Can Serve Them Better

The program has been a success, and the New York City government announced this month that it will invest $1.1 million to expand Troop 6000 from two dozen girls at one shelter to as many as 500 girls at 15 shelters across the city.

That's a victory for Giselle Burgess, but it hasn't solved a big problem: Almost a year after losing her apartment, she and her family are still homeless. She's looking for somewhere to live, but she says the size of her family still turns off many landlords.

"I used to worry a lot in the beginning," Burgess says. "I became depressed and upset, [until] I began to look at it as, it's not my time to leave the shelter yet."

For as long as she's at the shelter, Burgess wants her Girl Scouts to learn something from her. Some of the things they learn will go toward merit badges. Some won't.

Burgess hopes the scouting experience, and her own example, can teach Troop 6000 that hard times "are just seasons in their lives. And that they will surpass it, and that there's much more out there that they're capable of accomplishing."