Accessibility links
Military Tries To Cut Through The Noise Of War The military wants to reduce the deafening, chaotic roar of firefight noise so that front-line commanders can communicate with their troops. 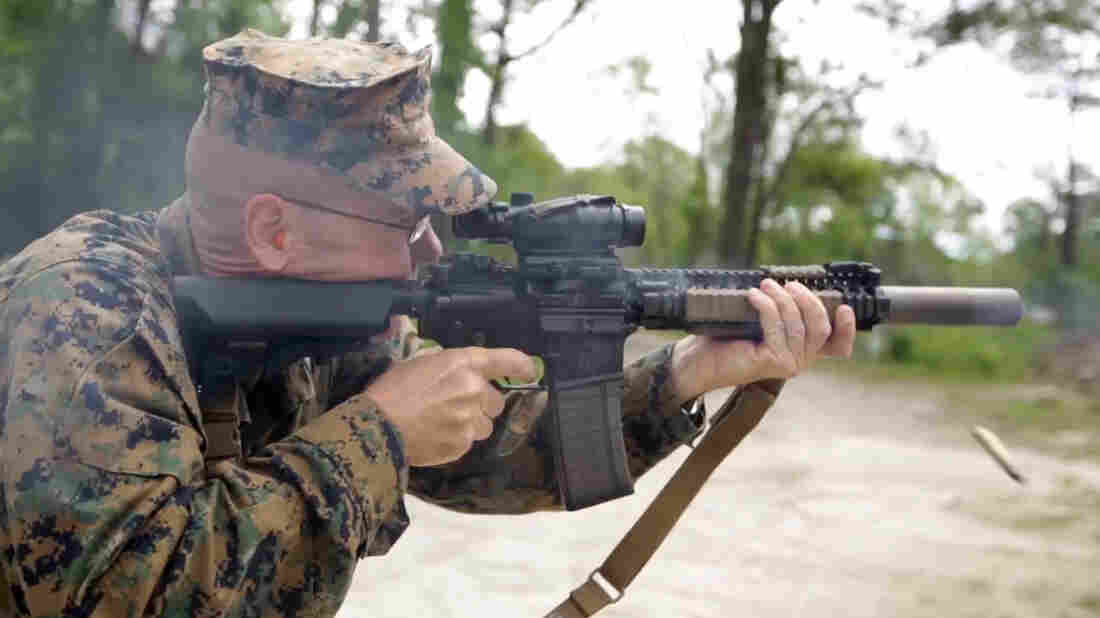 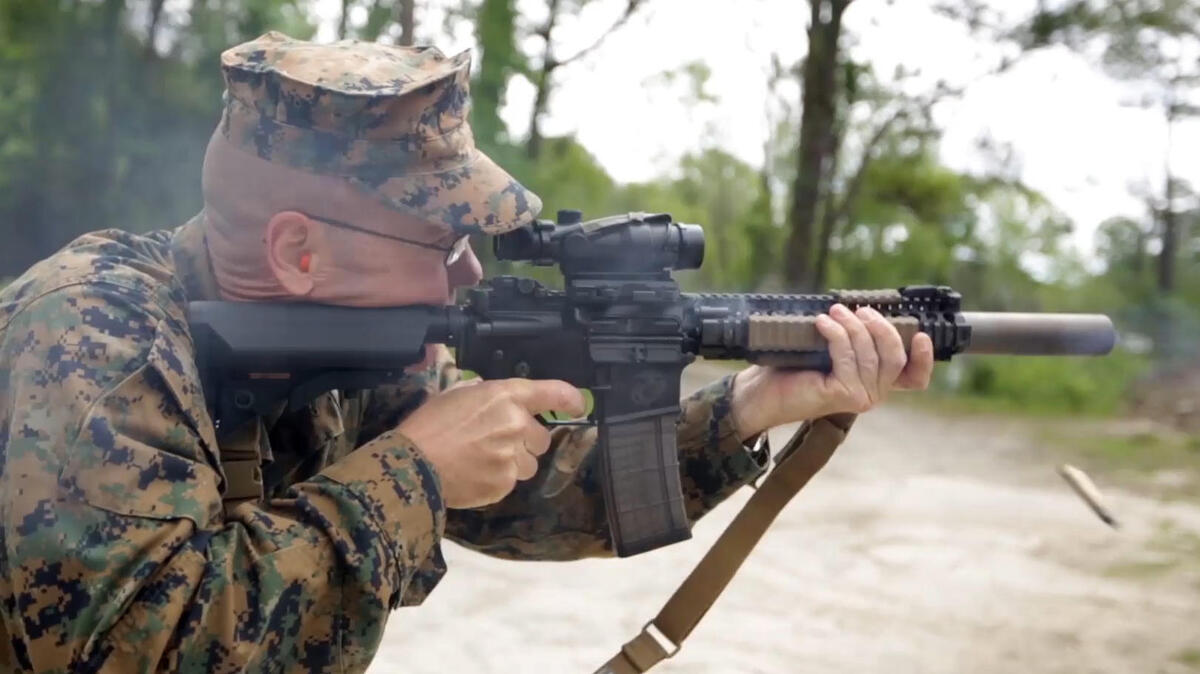 Christian Wade of the 2nd Marine Division at Camp Lejeune shoots a suppressed carbine. The suppressor, which is the canister on the end of the barrel, turn a painful, deafening noise into simply a loud one.

Now they're trying to get a battlefield edge with their ears, too.

The Marine Corps is experimenting with quieted-down weapons and electronic hearing enhancements that could reshape the soundscape of warfare. They want to minimize some sounds and amplify others to get more control over what they and their enemies hear.

About 2,000 Marines have been testing carbines fitted with sound suppressors. The devices have long been used by special operations units, and the Marines want to expand their use into the mainstream infantry.

The primary goal is to reduce the deafening, chaotic roar of firefight noise so that front-line commanders can communicate with their troops.

"The simplest communication is extremely difficult," said Sgt. Dakota Fox, as he supervised a quartet of young Marines on a Camp Lejeune,

It's even more of a challenge to communicate in an actual firefight, Fox said, when a dozen Marines or more might be spread across 150 yards, shooting rifles and machine guns at once.

Equipping the weapons with suppressors — cylindrical canisters on the end of the barrel — changes the volume and texture of the sound.

"It's a black-and-white difference," Fox said. "The biggest thing about the suppressor is the command and control it allows on the battle space. I can have a conversation [at a normal level] without having to raise my voice or tone or anything like that."

"The fog of war is a very real thing," Fox said. "The suppressor helps mitigate part of that."

Weapons are quieter, but still loud

Suppressors are probably familiar to anyone who's seen a James Bond movie. In firearms law and popular culture they're called "silencers."

That name's not really accurate, though. Up close, they turn a painful, deafening noise into simply a loud one, making it more of a "thump" than a sharp crack.

"We're taking the M4 carbine from about 160 decibels at the shooter's right ear, if he's right-handed, down to about 130," said Chief Warrant Officer 5 Christian Wade. "130 decibels is still quite loud."

Wade is the gunner-- the top weapons officer — for the Camp Lejeune-based 2nd Marine Division. He's overseeing the experiment for the division, which has about 1,000 suppressors.

So far, Wade says the Marine Corps' experience with the devices has been mostly positive. Besides helping troops communicate, suppressors lower the risk of hearing damage and help troops hide from the enemy, because they conceal the flash of a shot and make it harder to pinpoint a Marine's location by sound.

The experiment has shown that suppressors even improve marksmanship. That's partly because Marines are less distracted by the sound of their own weapon and those around them.

"They're actually firing using the fundamentals of marksmanship, and they're not worried about what the heck is going on to their left or the right," Wade said. "They're using far less ammunition and gaining far more hits with suppressors."

A "loud problem" and a "quiet problem"

There are some downsides, though. Wade said suppressors add weight to weapons and can get searingly hot. They also can cause firearms to need more cleaning and maintenance. 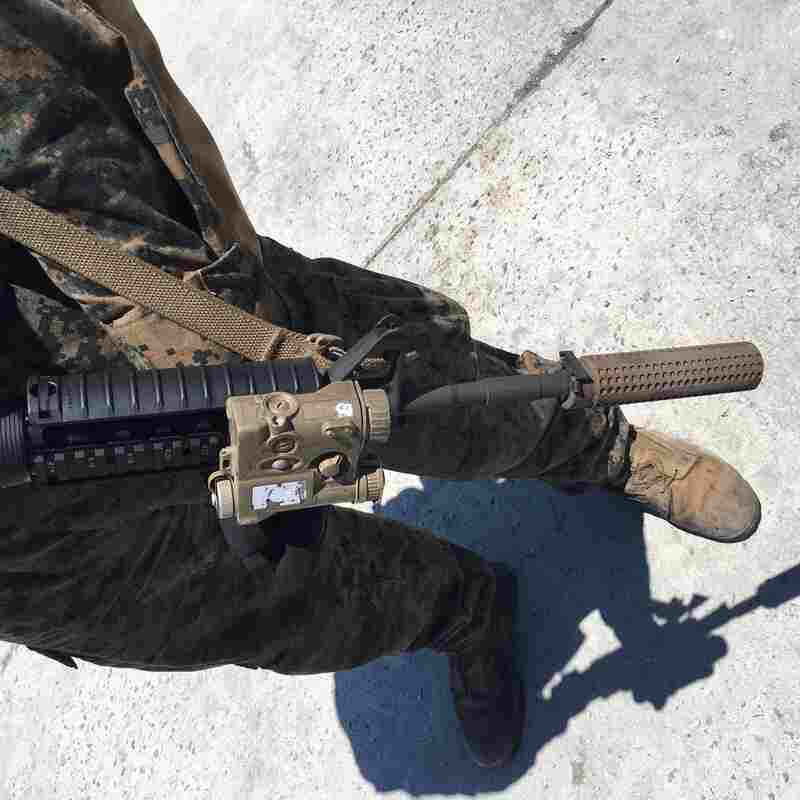 Wade said that point was driven home when he was observing Marines training with suppressor-equipped weapons in California. He heard bullets smacking into a nearby target, but he couldn't hear the shots themselves. They were being fired by a Marine behind a small hill just 25 yards away.

That's when he realized commanders might not immediately know that their troops had seen an enemy and started shooting. It's also true, Wade said, that enemy forces are increasingly likely to have suppressed weapons of their own.

So Wade decided to borrow something else from Marine special operations to expand the experiment: a helmet system with electronic headphones that digitally process sounds. They reduce the volume of loud noises such as explosions, but raise up other sounds that would normally be too quiet to hear.

Audiologist Eric Fallon said the military has both a "loud problem" and a "quiet problem."

If you use conventional ear plugs to block loud sounds, you may miss the soft ones that you need to hear to survive on the battlefield, he said. On the other hand, if you don't use hearing protection, you might be temporarily deafened at a moment when it's crucial to be able to hear.

"If you just look at the loud noises and you don't understand the quiet, then you're probably not going to offer a solution that is going to be readily adopted on the battlefield," said Fallon, a retired Army officer. "You do need your hearing for that auditory situational awareness."

Like the suppressors, the headsets are proven technology. In addition to special operations units, they're also used in industry and by civilian sport shooters. But Wade said the idea is to see if they help mainstream infantry troops who are typically younger, less experienced, and have different roles from the stealthy special operations outfits.

While the headset experiment is just starting, Wade said the suppressors may only need a few tweaks before they're ready for widespread use.

He said that has the potential to not only make the battlefield quieter, but also to change how Marines think about combat success. In the experiments, Marines are paying more attention to what they're accomplishing with their shooting, rather than putting too much emphasis on how loud their weapons are.

"No longer is this illusion of everybody's firing, we're making a bunch of noise, therefore, we must be kicking the enemy's butt," Wade said. "Marines are shooting and they're looking at the effect of their fire."