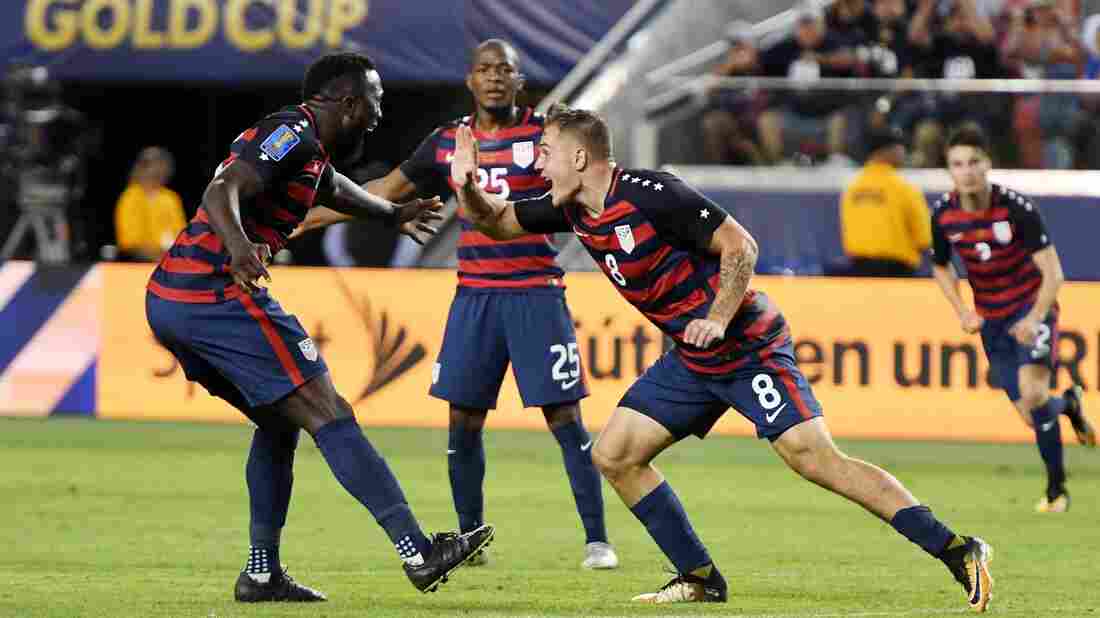 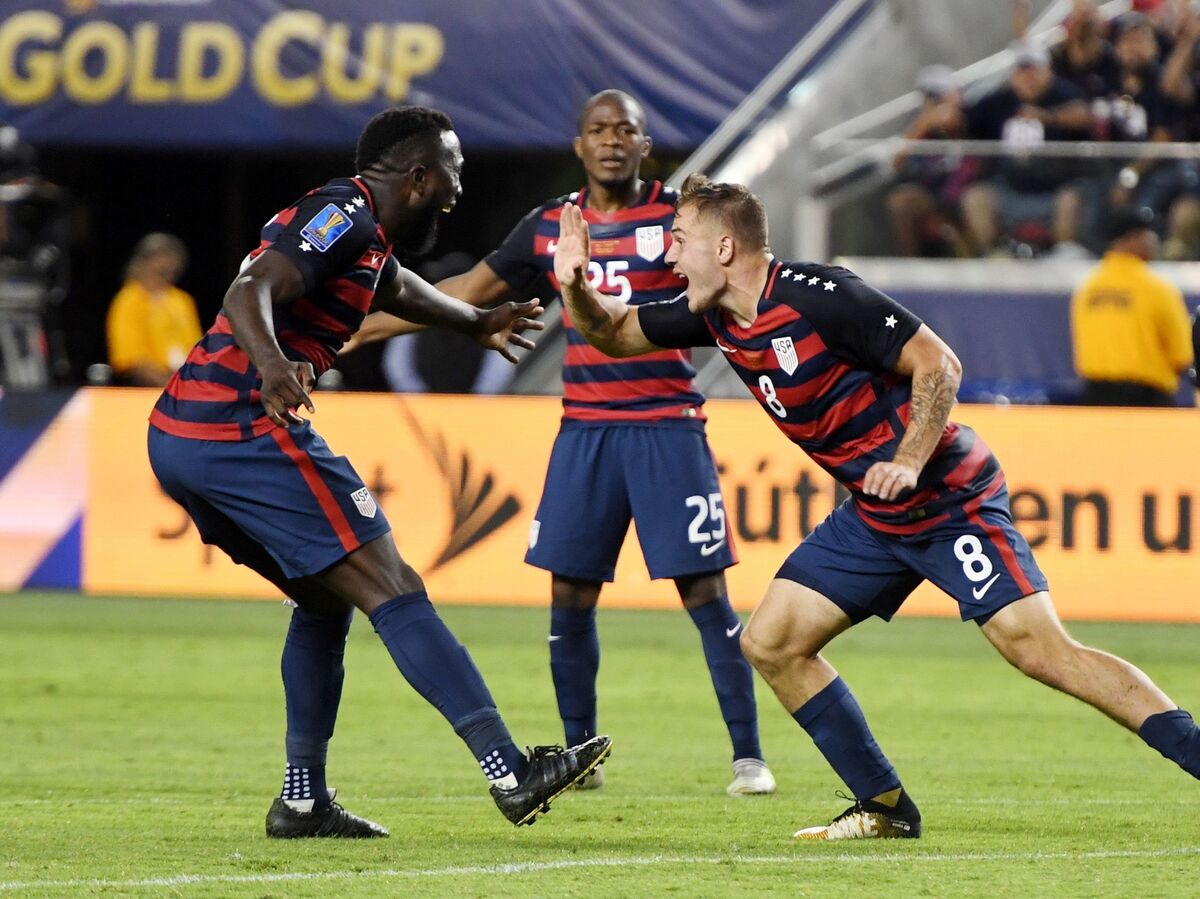 Jordan Morris of Team USA, right, celebrates scoring a goal against Jamaica during the final football game of the 2017 CONCACAF Gold Cup on Wednesday at the Levi's Stadium in Santa Clara, Calif.

The U.S. Men's National Soccer Team was back in a familiar position Wednesday night — playing to win the Gold Cup. It was a record 10th time the U.S. has reached the finals of the biennial CONCACAF tournament, which crowns the continental champion of North and Central America and the Caribbean.

An 88th-minute goal by forward Jordan Morris, off a deflection up the middle after a Gyasi Zardes cross, gave the Americans a 2-1 win over Jamaica. It's the team's fifth title in the past nine Gold Cups.

Team USA dominated for much of the match; Je-Vaughn Watson's goal in the 49th minute, a run-in from the back side on a corner kick, was the first shot Jamaica had had all night. But backup Jamaican goalie Dwayne Miller was able to smother chance after chance from the Americans, allowing only Morris' goal and another on Jozy Altidore's 45th-minute free kick. 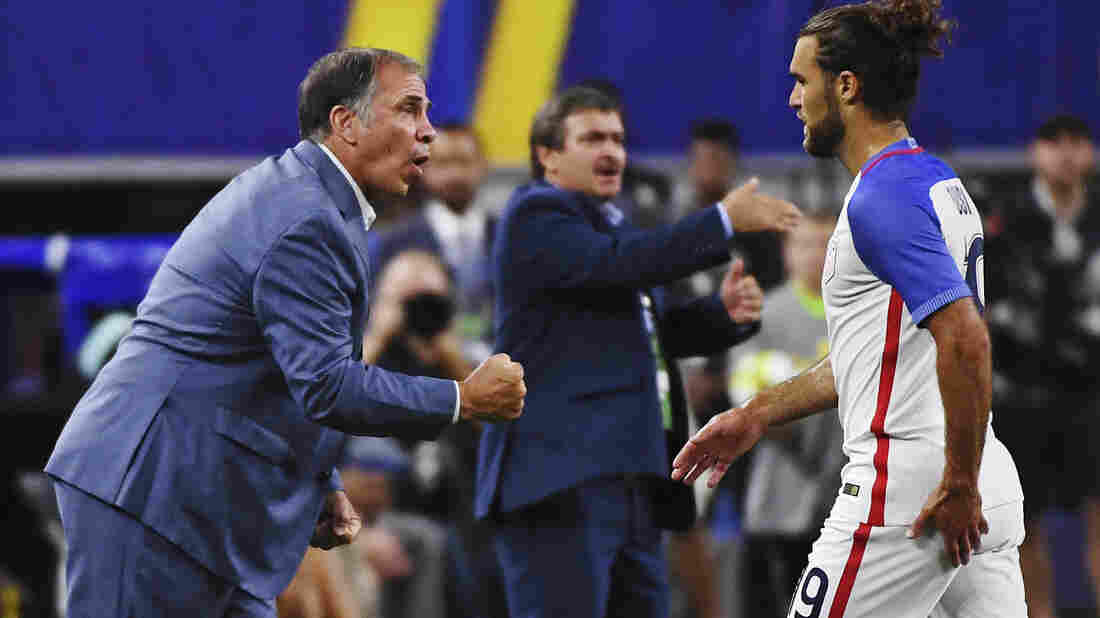 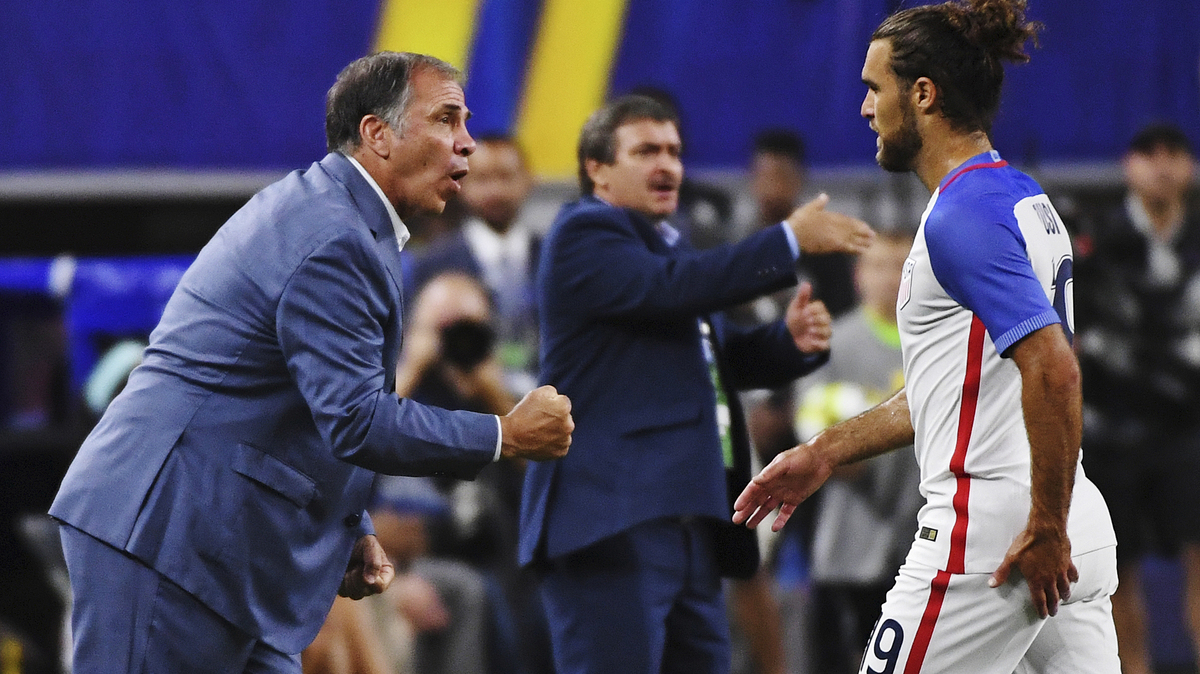 Coach Bruce Arena calls out to his team as U.S. player Graham Zusi steps off the field during a Gold Cup semifinal soccer match in Arlington, Texas earlier this month.

Morris said after the match that he was nervous when the ball bounced to him, the Associated Press reports.

"It was my guy that scored on the goal, so I was trying to make up for it any way that I could, obviously. I take responsibility for that. But luckily I could put one in the back of the net."

U.S. Soccer Reaches Back To The Past To Kickstart Its Future

Jamaican coach Theodore Whitmore said the strike "was like a dagger in the heart," according to the AP.

The United States had defeated Jamaica earlier this year 1-0 in an exhibition match in Chattanooga, Tenn. That game in February was also Coach Bruce Arena's first win after he returned to lead the U.S. men's national team after a decade hiatus.

Since he took over last November, Arena has not lost a game (nine wins and five ties). That's the longest undefeated streak to start a U.S. Men's National Team coaching tenure. "Four months ago we were rebuilding our program. A program that was in desperate shape of being in a position to qualify for a World Cup," he said. "So I think we've made great strides in the past four months and [playing in the Gold Cup Final] is a great opportunity for us to make progress."

The success comes at a good time for the United States. Arena replaced Jürgen Klinsmann who had been the squad's leader since 2011. Klinsmann was fired after a disappointing start in qualifying for the 2018 World Cup.

In 2002, Arena guided the U.S. to the quarterfinals (the best finish since the very first World Cup in 1930) but he also was at the helm when the U.S. was eliminated in the group stage of the 2006 tourney.

The U.S. men have played in every World Cup since 1990 and that streak was in jeopardy until Arena returned as coach. Since then, he guided the team to two wins and two draws in the final qualifying round. The U.S. is now in a much better position to make next year's tournament in Russia once qualifying resumes on Sept. 1 with a match against Costa Rica (a squad the U.S. beat in the Gold Cup semifinals on Saturday).

How the U.S. fared Wednesday had no direct bearing on its World Cup chances. But star forward Clint Dempsey (who tied the U.S. scoring record with his 57th goal against Costa Rica) said it's still important. "We know we're in a position to accomplish two big things this year," he said, speaking of both winning the Gold Cup a sixth time and qualifying for the World Cup in Russia.