Accessibility links
Who's The True Boss Of Snopes? Legal Fight Puts Fact-Check Site At Risk The future of one of the nation's first digital fact-checking initiatives is in doubt. The site's founder says a legal battle for control of the company has led to all of its revenue being cut off. 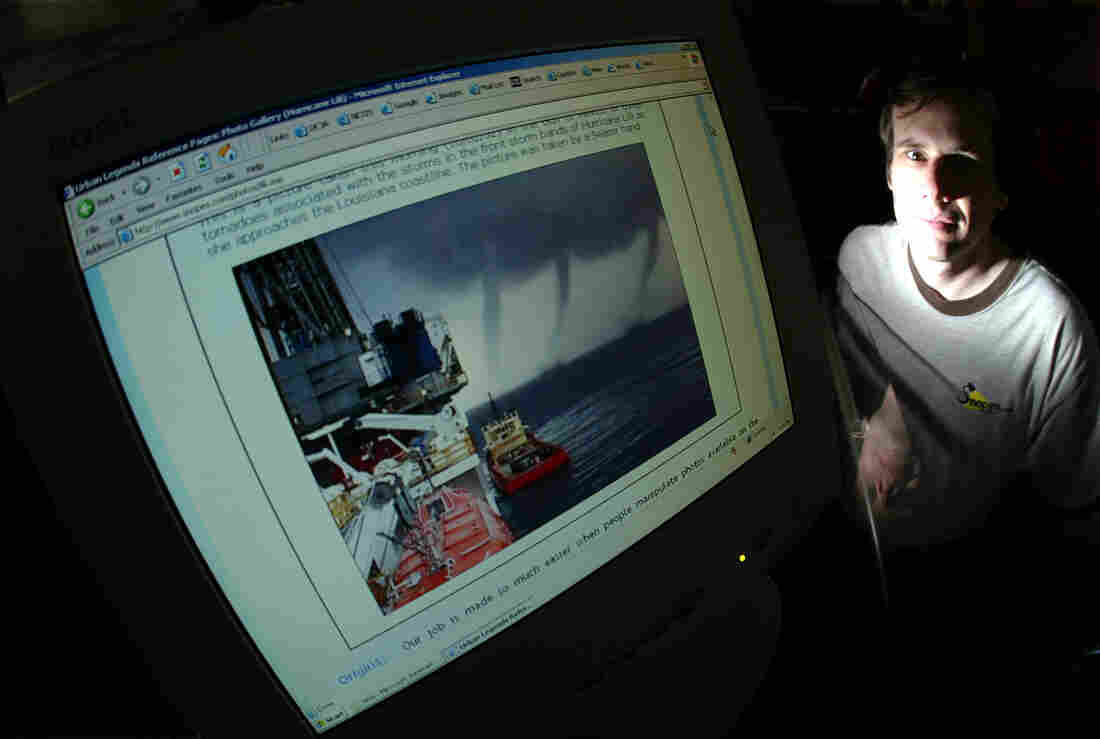 David Mikkelson, founder of Snopes, sits next to a doctored storm photo in 2004. Snopes debunked that image — and has uncovered many other hoaxes. But the future of one of the nation's first digital fact-checking initiatives is currently in doubt. Stephen Osman/Los Angeles Times via Getty Images hide caption 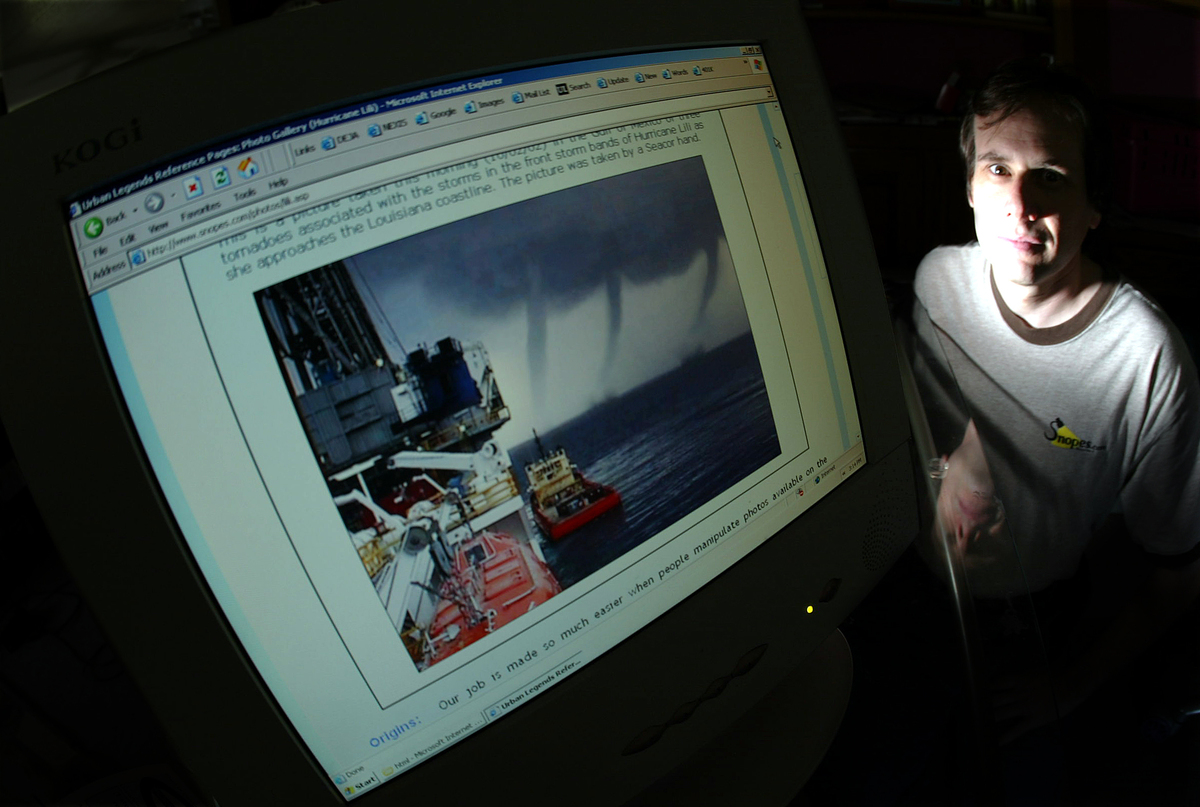 David Mikkelson, founder of Snopes, sits next to a doctored storm photo in 2004. Snopes debunked that image — and has uncovered many other hoaxes. But the future of one of the nation's first digital fact-checking initiatives is currently in doubt.

You may have read that Bigfoot was found dead on a lake shore in New Mexico this summer. He wasn't. You can learn about that hoax here from the myth-busting and fact-checking site Snopes.

You may have heard NASA predicted the Earth will endure 15 straight days of darkness this fall. It didn't. Snopes has that covered too — debunking the claim when it first appeared in 2015 and again in May when it resurfaced.

What isn't a hoax is that the future of Snopes, one of the nation's first digital fact-checking initiatives, is in doubt.

Ownership of the site is the focus of a sharply contested legal battle between its founder, David Mikkelson, and a small digital outfit called Proper Media, which had an arrangement to manage advertising and some other elements of Snopes' site. (It has similar agreements with such digital publishers as Salon, Raw Story and the Daily Dot.)

Mikkelson tells NPR that he's been cut off from all revenues and has launched online crowdfunding appeals; he says he's raised more than $600,000 in the first days of his efforts.

Snopes does not have a large newsroom. Its creation was sparked by the fascination David and his wife Barbara took in responding to urban legends that whipped around the ether in the early days of widespread email use. The name Snopes was taken from a family in several novels of William Faulkner.

Now operating with a team of just 13 editorial staffers (including video and graphics) Snopes weighs in on matters large and small, covering subjects including politics, pop culture, tech, health. While it's not a household name, Snopes drew 12.4 million unique American users in June according to Quantcast, and another 3.7 million around the world.

Snopes has endured because it has proved reliable. And the site has had a significant influence on how journalism is practiced in the digital era.

While many newspapers and television stations were scrutinizing the veracity of campaign ads, many claims made more broadly often passed without challenge.

Snopes has since been joined by many other players; Factcheck.org, affiliated with the University of Pennsylvania's Annenberg Public Policy Center, was established in 2003, and PolitiFact started in the early part of the 2008 presidential cycle. Major news organizations including NPR, the New York Times and the Washington Post now routinely fact-check statements made by major public figures.

Among its more recent posts, Snopes has unraveled claims that Pope Francis endorsed President Trump's campaign, that the Sandy Hook elementary school massacre was staged, and that the star of a Nickelodeon sitcom for kids was arrested for prostitution. All were false.

Facebook has turned to Snopes as one of the five U.S.-based fact-checking it relies upon to help stave off the spread of hoax accounts, often called "fake news." (Trump has adopted and co-opted the term to encompass mainstream news reports he doesn't like or that are critical of his administration.) In a project still in the testing phase, Facebook users can flag posts shared on the social media site as questionable; if enough users do so it is sent to the fact-checking outfits, which can share related posts that evaluate the veracity of its claims. If something has been debunked, a badge saying so is attached to the post to caution Facebook users.

But Mikkelson says Snopes' very existence is in question.

After he and his former wife, Barbara Mikkelson, divorced, she sold her 50 percent stake in Snopes and its parent company to five officers of Proper Media — as individuals. Proper Media is contending that it corporately owns half of Snopes and wants a judge to acknowledge that. The company alleges David Mikkelson unfairly enticed a former Proper Media official to work for him, and in so doing secured that official's 6.7 percent voting stake, once more giving him effective voting control over Snopes. And it alleges Mikkelson inflicted "substantial economic loss" on Proper Media.

Mikkelson tells NPR he severed that contract for cause, and was entitled to do so. Moreover, he argues that Proper Media as a corporation has no claim over Snopes' parent company, only the five individuals.

"The person in question, I did not lure or hire him away or entice him to leave Proper Media," Mikkelson tells NPR. "They fired him immediately after I told them to their faces how valuable he was."

Will Snopes stick around in its current form? Rate that "unproven."