Accessibility links
5 Unanswered Questions About Trump's 'Ban' On Transgender Troops President Trump surprised the military-industrial-congressional complex with a post on Twitter regarding banning transgender troops — even though they already serve openly now. 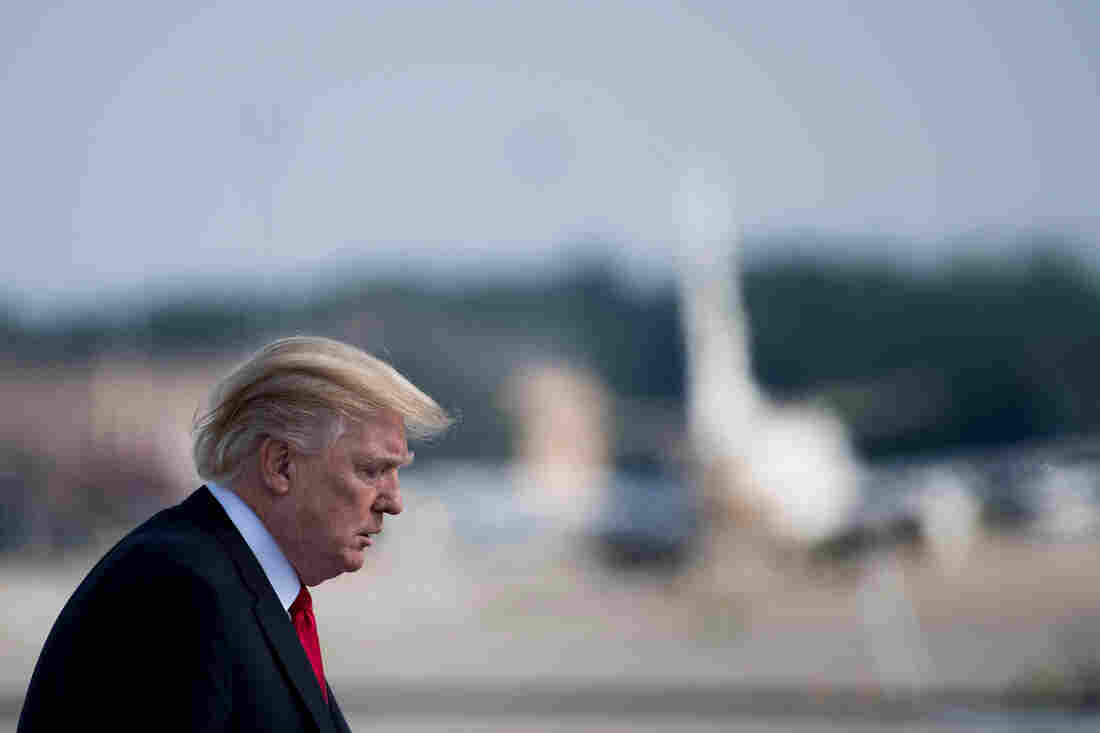 President Trump's announcement that he wants to ban transgender people from serving in the military could mean a historic reversal in the Pentagon's long-term trend of lowering barriers to service. Jim Watson/AFP/Getty Images hide caption 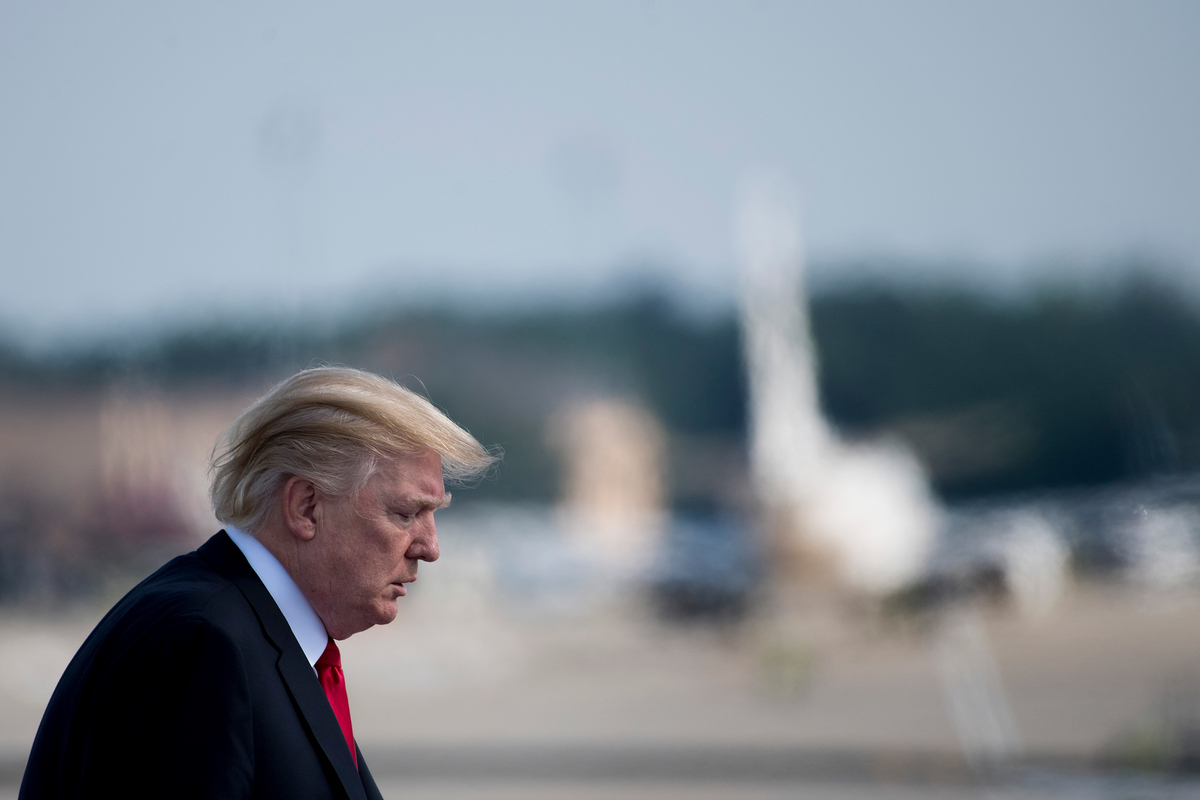 President Trump's announcement that he wants to ban transgender people from serving in the military could mean a historic reversal in the Pentagon's long-term trend of lowering barriers to service.

President Trump's announcement that he wants to ban transgender people from serving in the military could mean a historic reversal in the Pentagon's long-term trend of lowering barriers to service.

Or it could be a speed bump on a course the Defense Department was already following.

Almost no one other than Trump himself had any idea what he intended when he wrote this:

After consultation with my Generals and military experts, please be advised that the United States Government will not accept or allow......

....Transgender individuals to serve in any capacity in the U.S. Military. Our military must be focused on decisive and overwhelming.....

....victory and cannot be burdened with the tremendous medical costs and disruption that transgender in the military would entail. Thank you

"After consultation with my generals and military experts, please be advised that the United States government will not accept or allow transgender individuals to serve in any capacity in the U.S. military."

That came as news to the Defense Department, where officials were not prepared to explain how its personnel policies might be affected — and to members of Congress charged with overseeing and funding the military.

Here's a look at 5 questions Trump raised with his tweets.

The Pentagon permits transgender people to serve today; a Rand Corp study estimated there are as many as 6,300 on active duty. Other estimates place the number higher or lower across the force.

Former President Barack Obama and his secretaries of defense opened up many jobs in the military that were once closed. Women now serve aboard submarines and in once-closed combat jobs. Gay and lesbian troops may serve openly everywhere.

The last phase in the Obama-era changes required the Defense Department to decide what to do about recruiting new transgender troops, as opposed to clearing the way to permit service by people who'd already been in the military. The Obama administration's timeline had called for such recruiting to begin on July 1, but Defense Secretary Jim Mattis said in June that would be delayed.

The military services had asked for more time to study how they'll deal with bringing in transgender people, or troops who might want to transition.

Is Trump simply endorsing that delay and effectively instructing Mattis not to recruit transgender troops?

Or is this a broader new personnel policy from the commander in chief?

The language of his statement appeared to suggest it's a broader move. Trump wrote that transgender people would not be allowed to serve "in any capacity." That leads to the next question ...

2. What does this mean for current troops?

Would Trump order Mattis to try to discharge current service members? How would that process work?

The Pentagon has a long history of enforcing service bans on individual troops. For example, for much of the 20th century, and later under "Don't Ask, Don't Tell," the military could kick soldiers out for being gay or lesbian — and did. It could be an ugly process but there was seldom a calculated effort to excise all such troops at the same time.

What Trump might call for in the wake of Wednesday's announcement is a systematic effort to kick out an entire class of troops — in this case, every transgender person — even though it would affect only a tiny minority of the roughly 1.3 million people now serving. Troops discharged under Trump's policy would likely sue the government to try to stay in the military and preserve the policy Obama put into place.

Today, in an era in which troops can serve openly, commanding officers would have little problem identifying people violating Trump's policy. But would the Pentagon really demand that serving soldiers, sailors, airmen and Marines be pulled off duty and, in military parlance, "out-processed" all at once in one big batch? That would be unprecedented.

3. What will Congress do?

A number of lawmakers spoke out against Trump's announcement, complaining both about the substance of what the president said but also about the principle of trying to unveil a major policy change in 140-character missives.

"The president's tweet this morning regarding transgender Americans in the military is yet another example of why major policy announcements should not be made via Twitter," said Senate Armed Services Committee Chairman John McCain, R-Ariz.

Sen. Joni Ernst, R-Iowa, who is a colonel in the Army Reserve, said that although she opposes government funding for gender reassignment surgery, "Americans who are qualified and can meet the standards to serve in the military should be afforded that opportunity."

Sen. Orrin Hatch, R-Utah, spoke for almost everyone in what McCain calls the military-industrial-congressional complex when he said that he looked "forward to getting much more information and clarity from our military leaders about the policy the president tweeted today."

Members of Congress set policy every year for the military in the mammoth National Defense Authorization Act, which McCain is set to manage on the Senate floor once members there finish with action on health care. Lawmakers could use the authorization bill to set policy in the way they want on this issue, and if they conclude that they want to keep the old, Obama-era policies in place, that could force Trump to decide whether to sign the bill or issue a veto.

Trump might do so. Obama vetoed a defense authorization bill in 2015 to make a point to the Republican-controlled Congress. Trump could do the same and test how much lawmakers were really willing to defend transgender troops, compared with the rest of the priorities in the legislation.

4. What will Trump do next?

White House press secretary Sarah Huckabee Sanders had no good answers for reporters on Wednesday about what would follow Trump's tweets.

"The implementation policy is something the White House and the Defense Department have to work together to lawfully determine and ... I imagine the Department of Defense will be the lead on that," she told reporters in the briefing room.

Huckabee Sanders said Trump had made his decision about transgender troops on Monday and that Mattis "was immediately informed, as was the rest of the national security team."

If that is so, Mattis — who is on vacation this week — evidently did not inform anyone else at the Pentagon, where officials were surprised by Trump's posts on Twitter and had no answers about what the president's announcement would mean for the force. Defense Department leaders did not know what it would mean when Huckabee Sanders said they would be "in the lead."

In all likelihood, the matter will continue to rest with Trump. He could go ahead with an attempt to bar service by transgender troops and begin to drum out personnel who are in the force today, even calling them back from deployments in a highly visible new drawdown.

But the delay that Mattis already put into place on the planned start to recruitment of new transgender troops gives Trump and the White House room to climb down. They could decide that the president's statement will have turned out simply to have been an affirmation of Mattis' decision — or try to split the difference by permitting transgender people who serve today to remain in the force but bar new ones from joining.

5. Could the Pentagon drop medical support for transgender troops?

If Trump, Mattis, and Congress can't countenance the idea of kicking out all current transgender troops, one possibility short of that might be eliminating government support for those troops' medical care. On Twitter, Trump cited "the tremendous medical costs and disruption that transgender in the military would entail."

Lesbian, gay, bisexual and transgender rights advocates this week have pointed to studies that estimate the Pentagon will spend about $8 million per year on medical care for its transgender population — out of the roughly $600 billion the Defense Department is expected to spend this year.

For opponents with an ideological objection, however, such as Ernst, the government shouldn't spend a single dollar on this. And if government support for transgender troops is what's stymieing work in Congress on defense bills, support for the Homeland Security Department and other such priorities, the Republican majority might support what it considers a compromise that involves striking it out.