Accessibility links
June Foray Foray voiced a wide variety of animated characters, and she brought the same genial humor and warmth to them all — except one. 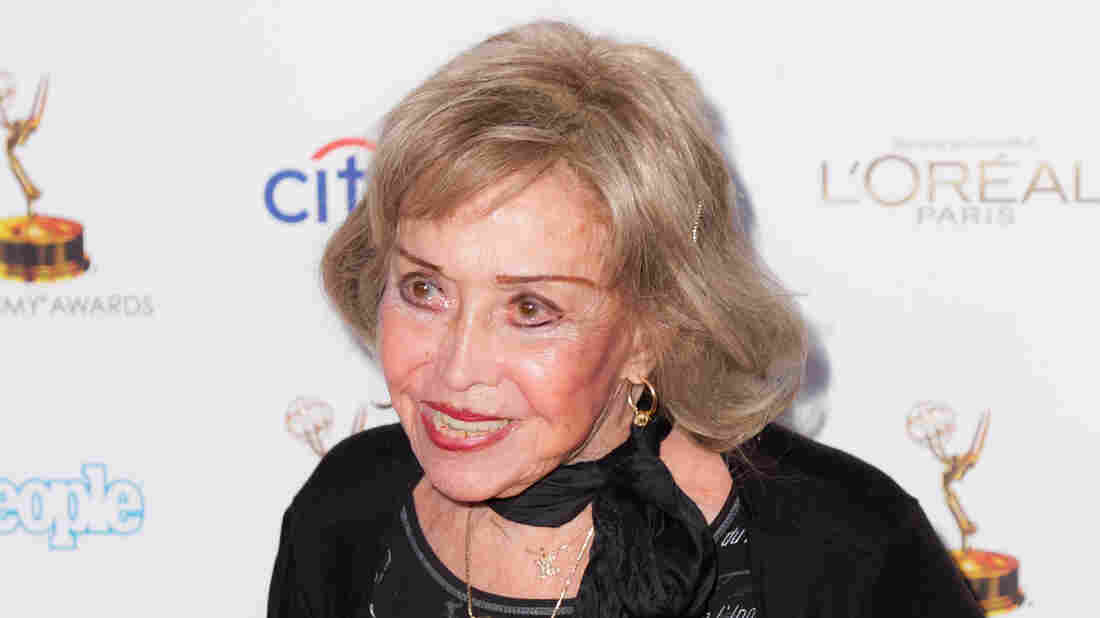 Now Here's Something We Hope You'll Really Like: An appreciation of the late June Foray, voice of Rocky the Flying Squirrel and many others, shown here arriving at an Oscars reception in 2013. Rodrigo Vaz/FilmMagic hide caption 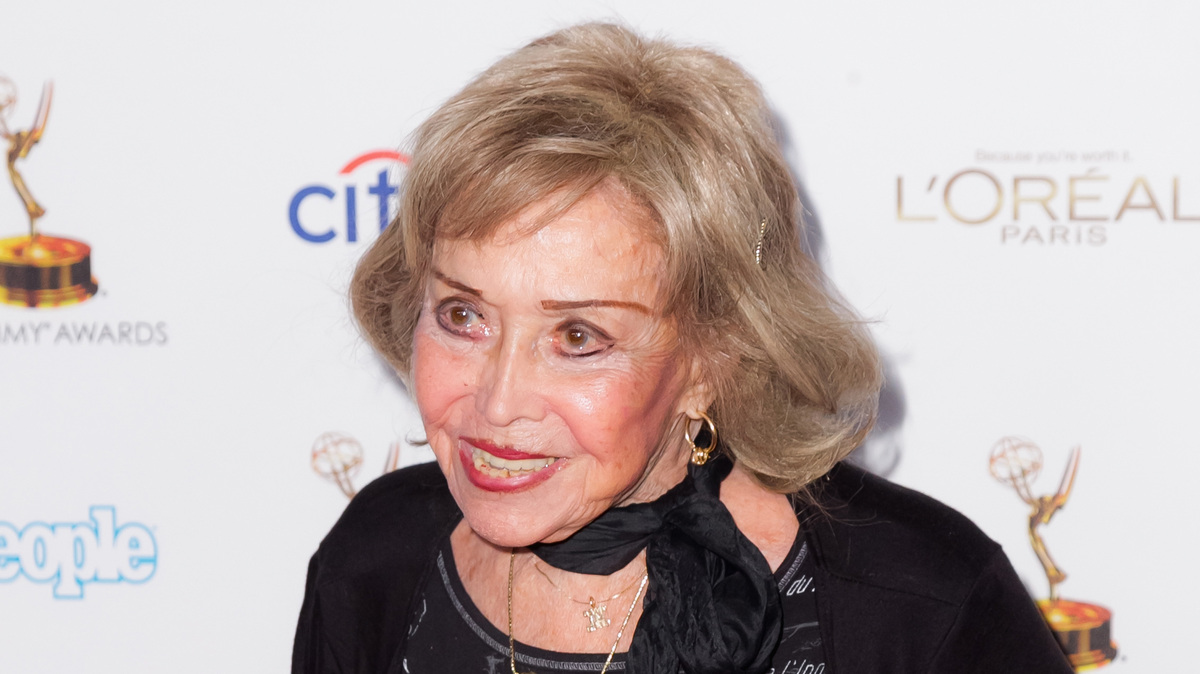 Now Here's Something We Hope You'll Really Like: An appreciation of the late June Foray, voice of Rocky the Flying Squirrel and many others, shown here arriving at an Oscars reception in 2013.

June Foray is gone, leaving an absence, an ache, a cloud of whirling bobby pins in her wake.

The voice of many beloved animated characters, including the plucky Rocky the Flying Squirrel, the sinister spy Natasha Fatale, the tow-headed moppet Cindy-Lou Who and — most delightfully, to my mind — the girlishly ghoulish Witch Hazel, Foray died Thursday at the age of 99.

She was called the Queen of Animation for a reason — she was a passionate lifelong advocate for the form, and for recognizing the efforts of those who work in it. Variety's obit goes deep on her role in founding the Annie Awards, and in establishing the Oscar's Animated Feature category.

Voice actors like Foray are known for their versatility, and certainly she assayed hundreds of very different roles over the course of her long career. But the reason she's a legend is because she never disappeared into any of those performances. You clocked Foray's voice whenever you heard it, whether she was pitching it forward several decades for the tough-as-nails Granny of "Tweety and Sylvester" shorts, or pushing it up an octave to land the melodramatic quaver of perennially distressed damsel Nell Fenwick, long-suffering girlfriend of Dudley Do-Right.

Whatever the character, you knew her voice at once, and you likely smiled upon hearing it. That's because, layered under every vocal performance, at its core, lay the same abiding warmth, a unique timbre that felt both knowing and familiar.

It's there in the piping tenor of Rocket J. Squirrel, and in the vodka-throated rasp of Natasha Fatale. It's there in the cackle of Witch Hazel, the coo of Cindy-Lou Who, and the wry, gravelly laughter of Mulan's Grandmother Fa. (It's interesting to compare Foray's Grandmother Fa, an elderly character she voiced at the age of 80, to her Granny, an elderly character she started voicing at the age of 38. You can hear a young woman pushing herself hard into Granny's deliberately shaky falsetto, while her Grandmother Fa is softer, warmer, and much closer to Foray's actual voice at the time.)

The Voice Of Rocky And Natasha Earns An Emmy

She began her career at a time when roles for women — even animated women — found them relegated them to love interests and sidekicks. On the Rocky and Bullwinkle Show, originally broadcast from 1959 to 1964, Nell Fenwick and Natasha Fatale set up the jokes, while Dudley Do-Right and Boris Badenov drove them home. Rocky was a boy squirrel, but even he existed as little more than a straight man to the spotlight-hogging Bullwinkle.

Only on the Rocky and Bullwinkle segment "Fractured Fairy Tales" did Foray really get to show her comedy chops, as the anthology format called for a rotating roster of tough cookies: independent-minded princesses and tart-tongued witches. Proscribed gender roles, yes — but each one different, and recognizably Foray.

She got a bit more room to play when she tackled villains like Witch Hazel, who tangled with Bugs Bunny on several occasions. The vain, coquettish hag always held her own, and took an infectious amount of joy in her work. She laughed at her own jokes — and invited you to join in.

It's likely because of Foray's warmth, her familiarity, her voice's ability to trigger feelings of affection in the listener, that her turn as a true, literally cold-blooded villain proved so shocking, so indelibly horrifying, for a generation of viewers.

Yes. I am talking about Nagaina.

"And She Will Be Worse Than Five Nags!"

In 1975, animator Chuck Jones adapted Rudyard Kipling's Jungle Book story "Rikki Tikki Tavi" into a television special. Orson Welles narrated the tale of a cute mongoose adopted by a British family in Colonial India, who proceeds to defend their lily-white ankles from a pair of deadly cobras.

There is Nag, voiced by Welles himself, and his wife Nagaina, voiced by Foray.

It's available to stream on several services. It is also, it seems important to note here, nightmare fuel of the highest grade.

So if you want your kids to grow up in the helpless, coiled grip of a lifelong fear of snakes, by all means get this thing in front of their eyeballs. The younger the better. Because that's how it worked on me, and on many, many others my age.

It's not the animation, which is effective enough, if familiarly Looney Tunes-ish. No, it's the voice acting.

The cobras' voice acting, in particular.

Both Wells and Foray deliver their lines in a hoarssssse, uuuurgent whissssssper, sssssstretching out every sssssss. Welles is predictably creepy — the man knew his way around a vocal fold, after all — but it's Foray's Nagaina who represents a study in sudden-onset ophidiophobia.

Why is that? Because you can hear Foray — genial, funny, familiar June Foray! — under every cold remorseless sssssyllable. And that disconnect is terrifying.

It's nothing less than the voice of death itself, swaying patiently before you, filled with hate. It is not a thing seven-year-old mind can easily process. Nor a thing that a 49-year-old mind can think about without shuddering. (I did not need to check that quote, by the way, as it has been sitting in my brain, wrapped around my frontal lobe, for decades.)

The other encomiums you'll read today will talk about how beloved Foray was, how tirelessly she worked on behalf of her fellow animation professionals, and of course, how many of her characters we'll carry with us forever.

Or see a gazebo.