Accessibility links
Environmentalists Provoke Pipeline Workers To Speak Up As oil and gas pipeline projects increase, and more environmentalists protest, a Pipeliners union wants to make sure it's part of the public conversation. 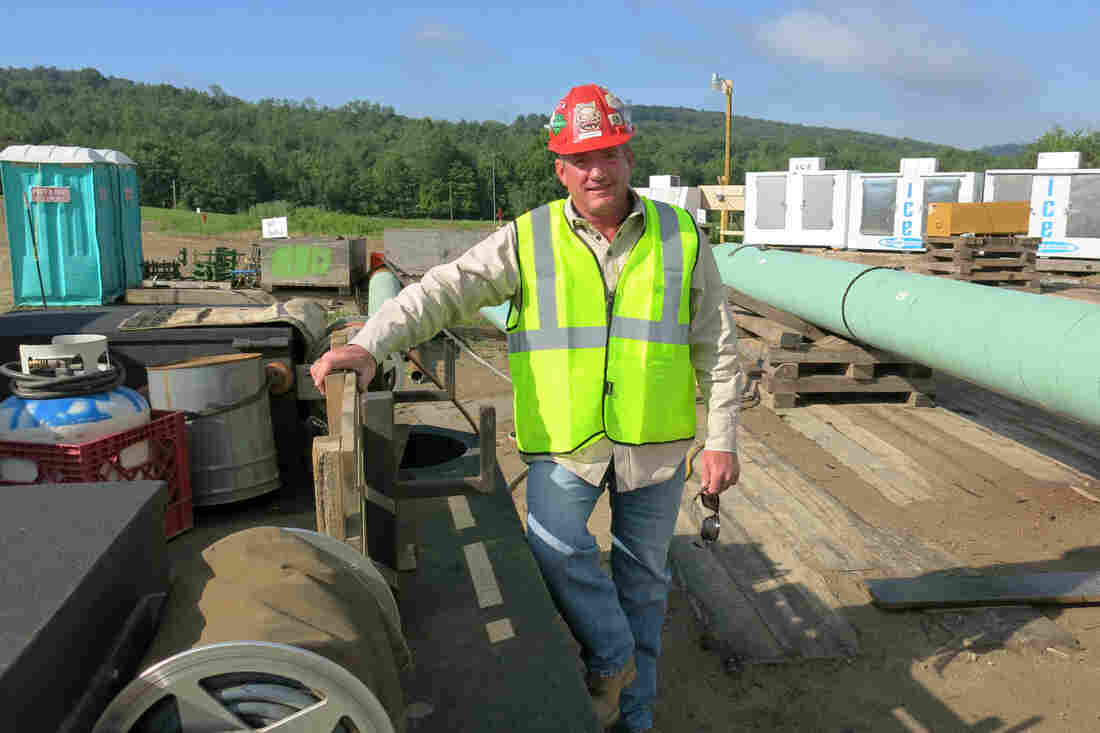 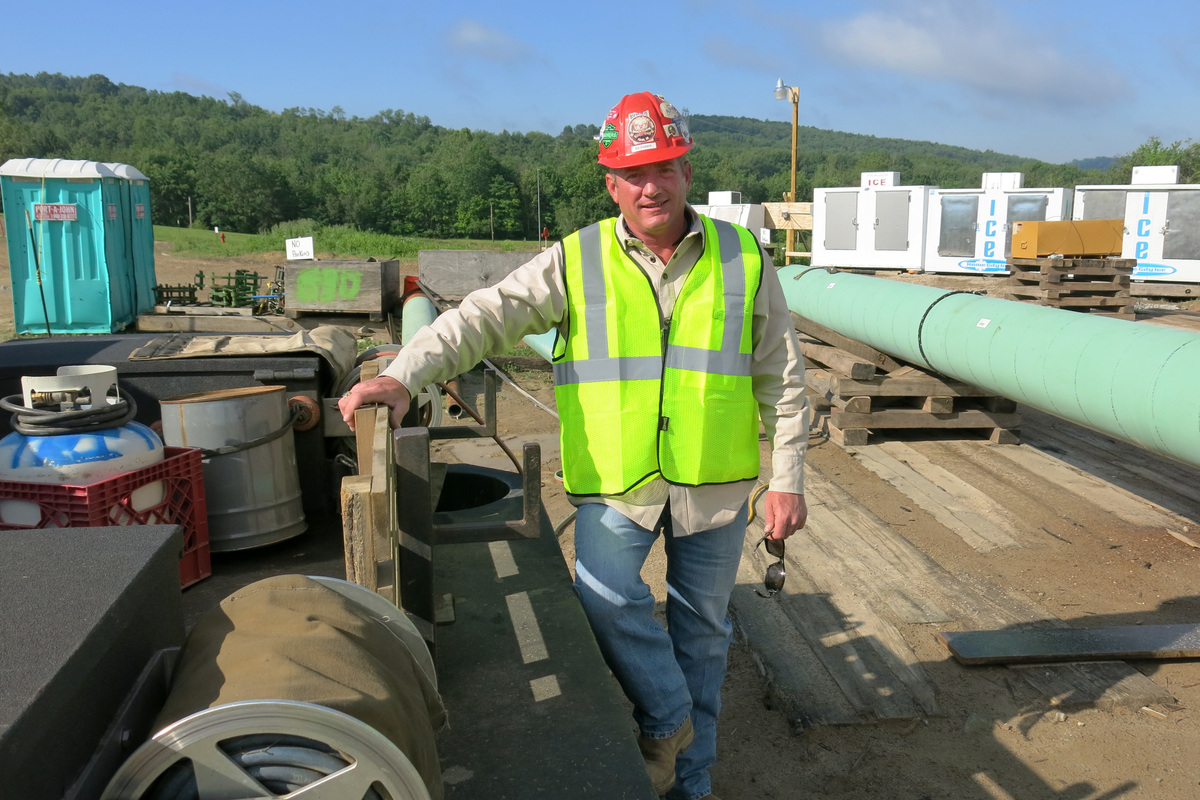 The people who build oil and gas pipelines in the U.S. have worked in relative obscurity for decades. But a growing number of protests against pipelines are turning some of those workers into activists themselves.

The U.S. produces more oil and gas than any other country, according to the Energy Information Administration. That's led to a pipeline construction boom and a growing protest movement that's had some success delaying projects, notably the Keystone XL and Dakota Access pipelines.

Environmentalists concerned about climate change have a strategy – dubbed "keep it in the ground" – to stop new pipelines and other infrastructure from being built. The goal is to make it difficult for companies to develop new fossil fuel sources.

This has prompted Pipeliners Local Union 798 to get involved in the public conversation about pipelines.

"We're having to do a lot of lobbying for ourselves just to stay employed," says Ed Coker, a Local 798 job steward. The union created a website and encourages members to contact lawmakers, sign petitions and attend town hall meetings.

"Pipeliners," as members of the union call themselves, are a tight-knit group of journeymen, welders and welder helpers. They travel around the country from job to job. If no pipelines are under construction they don't work. But Coker says now is a busy time.

This has been a good year, politically, for the union. Coker says most Pipeliners supported Donald Trump and were energized by his focus on two topics that keep them employed: building infrastructure and supporting the domestic oil business.

Still, it's clear that Coker and other Pipeliners feel misunderstood. They view their work as an important contribution to the economic life of the country. When protesters say they shouldn't be building pipelines, it offends them. Part of their new-found activism includes talking more publicly about their work.

"We're certainly not trying to destroy the environment. You know, I'm as worried about the environment as anybody else," says Coker. Currently he is overseeing his union's work on a section of the Mariner East 2 pipeline, which has been the focus of protests and legal challenges. 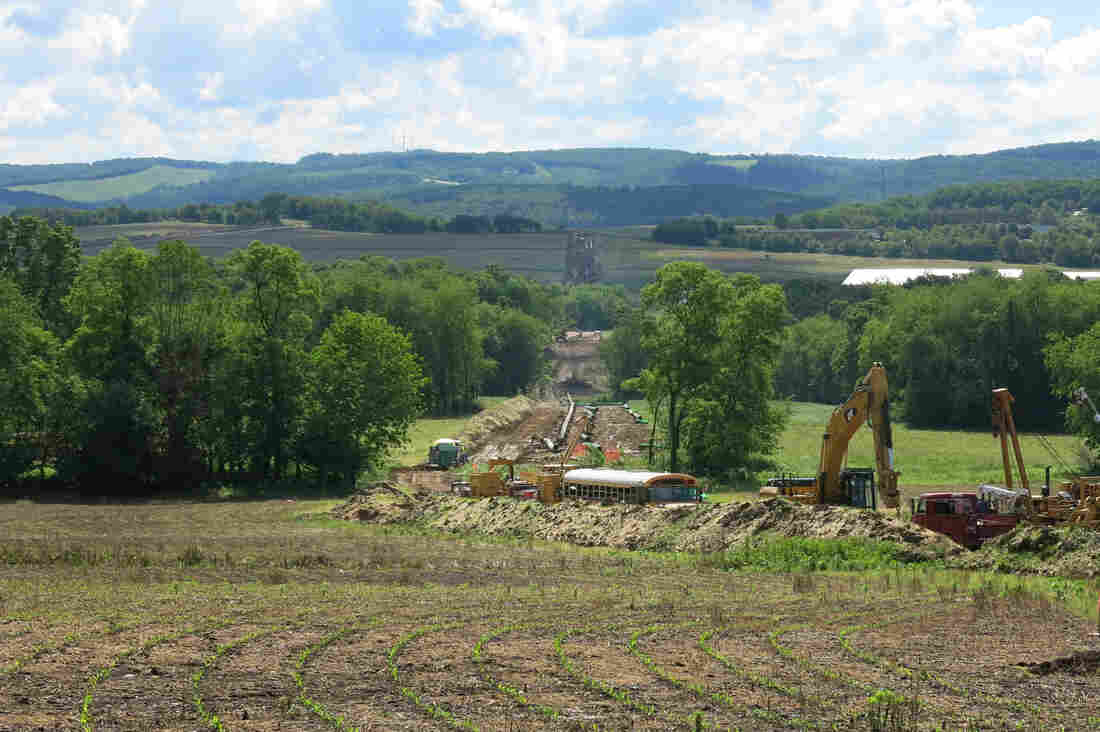 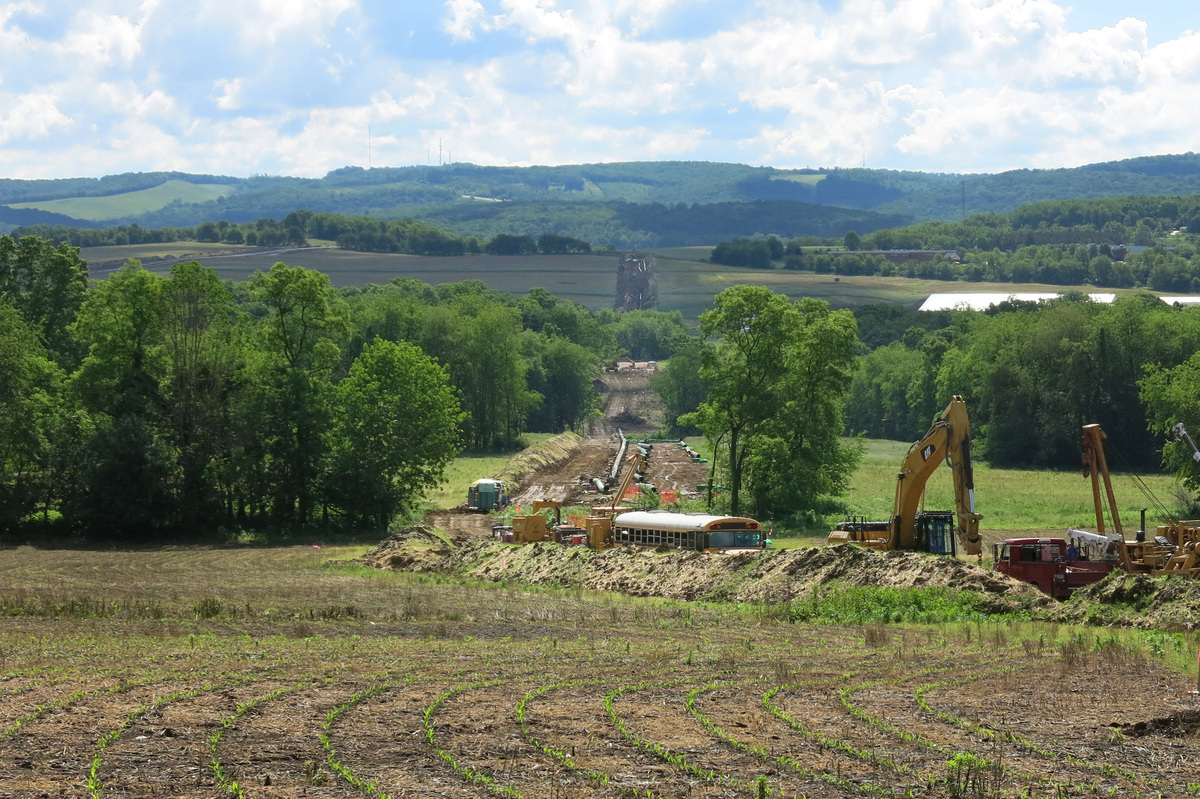 Construction area for the Mariner East 2 Pipeline near Blairsville, Pa.

Coker's job site is near Blairsville, Pa. He says he's not seen any protesters on his section yet. His welder helper David Skaggs says if protesters do show up, his response will be polite.

"I was on a job last year and protesters came by and they crawled over the fence and crawled into the pipe," says Skaggs. He says crews put fans at the other end of the pipe to blow air inside for the protesters.

At the job site, Coker recently hosted NPR for a tour of the under-construction pipeline. "This is a moving assembly line," said Coker. "It's no different than going to an automobile manufacturing plant except, there the conveyor is moving — here the people are moving."

Coker argues that crews often leave a pipeline construction site better than they found it. They do things like lay down straw to prevent erosion and plant native seeds to benefit wildlife. And Coker is quick to point out that every weld is inspected and x-rayed to ensure there are no flaws that could lead to a spill.

Another thing Pipeliners want you to know is that they work long, hard hours. Welder Helper Cody Kasbee says he's been on this job for a few months and works six days a week, up to 15 hours a day. There can be extended periods off in between jobs, still Pipeliners say they have to give up things others take for granted.

"I live out of my travel trailer, so I just pull it and wherever it's parked is basically home for the time being," says Kasbee. He's from Pennsylvania, so this time, he says he's able to visit his parents some weekends. 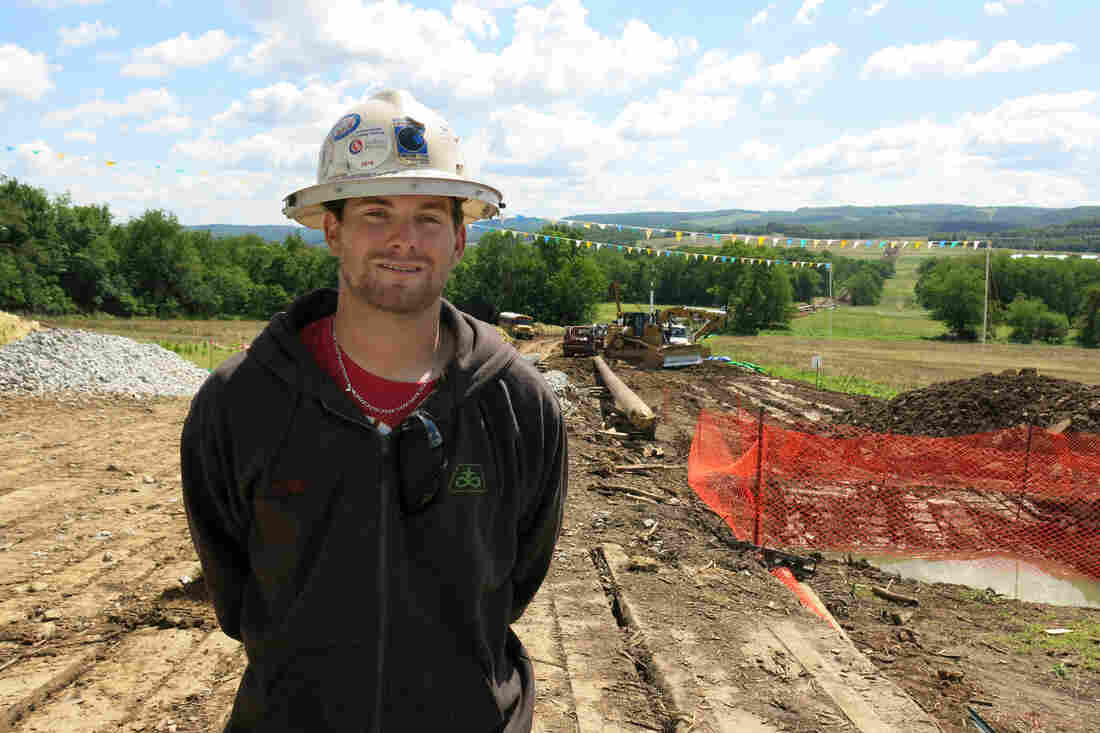 Cody Kasbee, 22, is a welder helper with Pipeliners Local Union 798. He says he works up to 15 hours a day, six days a week. Jeff Brady/NPR hide caption 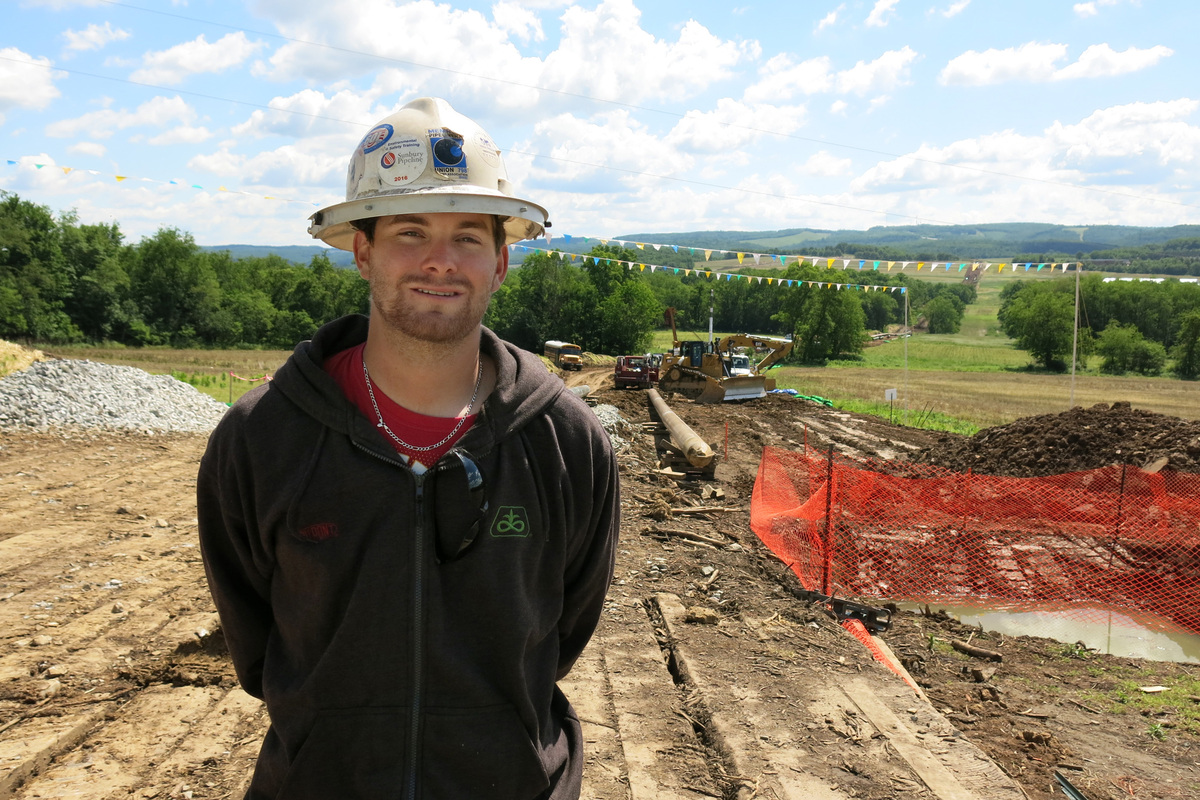 Cody Kasbee, 22, is a welder helper with Pipeliners Local Union 798. He says he works up to 15 hours a day, six days a week.

There is an upside though: the pay is good.

On the Pipeliners Union Facebook page there are regular posts about new pipeline construction jobs. And from the responses, it's clear that, despite active protests, there are people looking for work who are ready to sign up.