Accessibility links
'Curse Words' Proves You Can Never Have Too Much Mystical Fire Charles Soule and Ryan Browne's neon-drenched comic is giddily over-the-top, featuring a buffed-up wizard named Wizord, his talking koala sidekick and many, many glowing blasts of mystical fire.

'Curse Words' Proves You Can Never Have Too Much Mystical Fire

'Curse Words' Proves You Can Never Have Too Much Mystical Fire 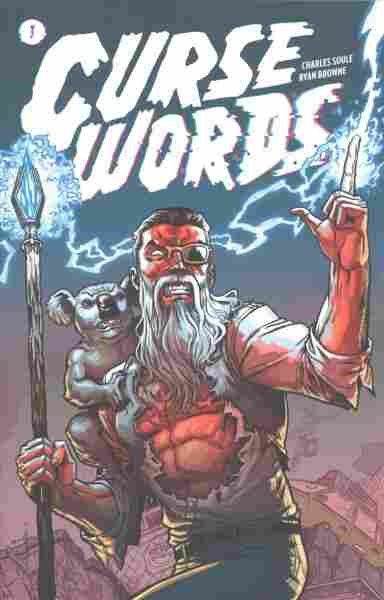 by Ryan Browne and Charles Soule

A wizard named — for no particular reason — Wizord and his sidekick Margaret (a talking koala, again for no particular reason) star in Charles Soule and Ryan Browne's giddily indulgent, neon-drenched Curse Words. There's actually no particular reason for a lot of what's packed into this comic, unless you consider a robust sense of fannish fun to be a life priority — which, come to think of it, you probably should. If, faced with a tale about a jacked-up wizard from another dimension and his koala pal, you find yourself asking, "What's the point?" then Curse Words simply isn't for you. Also, you're missing out.

Soule and Browne's creation is a classic folly: It exists to amuse and astound the reader who never imagined something so absurd coming into being. Soule, who's been racking up wins at Marvel and DC (he's probably best known for his work on Daredevil and Star Wars titles) has apparently been feeling a bit pent up. Wizord comes to Earth from a dimension known as The Hole World, bringing along magical gems, a kickass staff that shoots blue light and an assortment of antagonists who, like Wizord himself, know no real limits to their powers.

If, faced with a tale about a jacked-up wizard from another dimension and his koala pal, you find yourself asking, 'What's the point?' then 'Curse Words' simply isn't for you. Also, you're missing out.

At first, those powers are wreathed in a certain sense of danger. Wizord, we learn, was actually sent to Earth to destroy it, as commanded by his evil master Sizzajee. But even if the introduction of a baddie named Sizzajee doesn't puncture whatever menace lurks, fairly quickly Wizord rethinks his evil designs. It seems he's learned to like our world's freedom. Soule firmly steers Wizord clear of all signs of poverty and blight, so both he and the reader get a rosy view of this dimension. (It's literally rosy — Browne uses lots of pink.) Wizord's true motives do remain somewhat ambiguous. At one point, he shrinks down a baseball stadium to fit into a whiskey bottle, then lies about it to city officials.

Even so, it's hard to take a guy seriously when he's sporting a manly beard of power. We know there's some relationship between Wizord's facial hair and his magical abilities because, when Sizzajee strips both from him, he feels impelled to don a fake that ties at the back of his head. Besides the beards, Soule dishes up magically multiplying Sri Lankan strongmen, flying attack cherubs, guns that turn into miniature alligators and shout-outs to Arrested Development and Cirque du Soleil. Even the action words are over the top: Kzzzack! Thwoosh! Kazarg!

Such profligacy is a familiar device, and it needs to be truly overwhelming to succeed. Curse Words loses steam whenever Soule eases up. There should be even more allusions here, more kooky elements thrown in the pot. The main villain (and Wizord's ex), Ruby Stitch, is one-dimensional — in this first volume, at least. Ruby could have used a sidekick of her own. How about, say, a scorpion ... in a top hat ... who speaks only in rhyme? (See, it's not that hard to do.)

Still, the whole unwieldy shebang is elevated and sustained by the crackling, supersaturated art. Browne's got a fabulous knack for fight scenes. He's no great shakes at expressive faces, but Wizord & co. are really only called upon to grimace — wrathfully, maliciously, gleefully or triumphantly — so it's no big loss. Above all, Browne knows how to lay it on thick. Glowing blasts of mystical fire explode across almost every page — and why not? You can never have too many glowing blasts of mystical fire.

Well, you can, but not in this story. Curse Words is a comic that you have to be in a certain kind of mood to read, but when you're in that mood, it's just right. Especially because of Botchko, the barrel-bellied, cloven-hoofed centaur who hefts a massive hammer. And the platinum (as in, metallic) pop star. And the giant, four-winged bird. It may not be as maxed-out as the authors think, but Curse Words is close enough.