Accessibility links
Could Trump Pardon Himself? Probably Not No president in history has done that, but some likely have contemplated it. 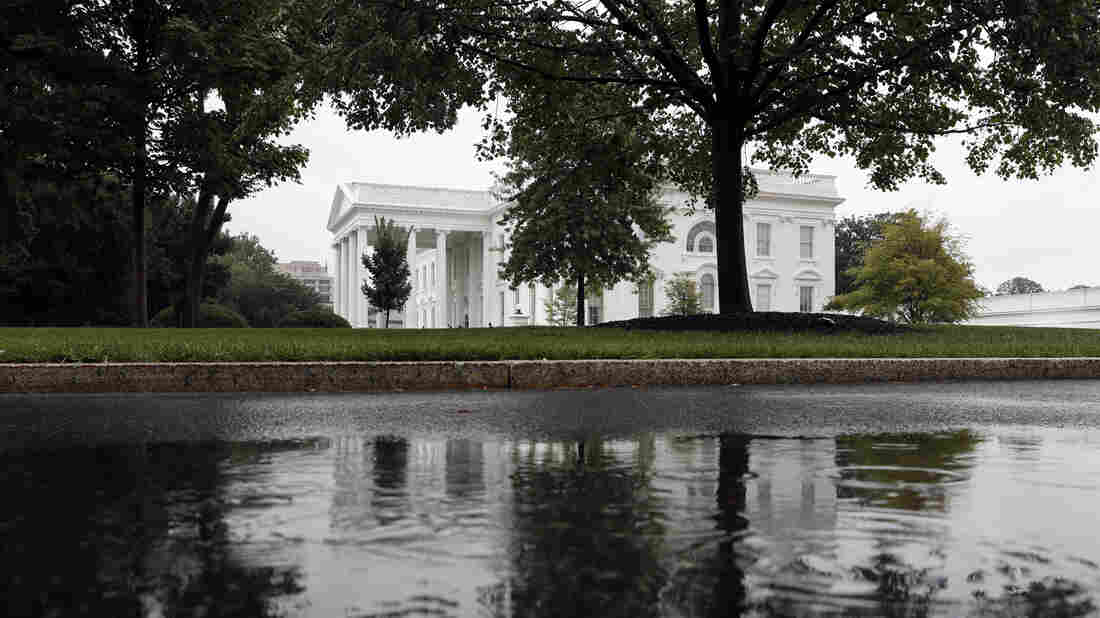 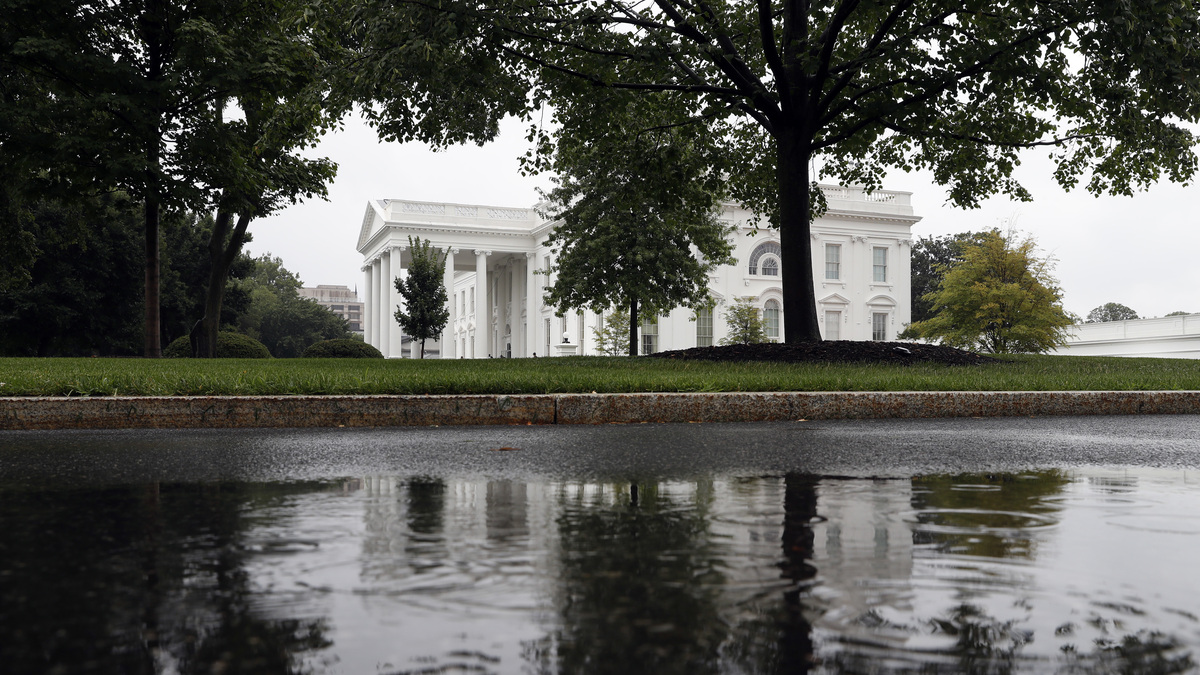 The White House is seen reflected in a rainwater puddle on Friday, July 28, 2017 — amid very stormy times in Washington, D.C.

The ripples from President Trump's recent tweet suggesting he could pardon himself continue to billow out into the body politic.

No president in the history of this country has ever pardoned himself, though President Nixon, and perhaps others, may have contemplated it. Presidents Clinton and George H.W. Bush were each under investigation by a special prosecutor as their terms drew to a close, but neither chose to pardon himself.

President Trump's tweet responded to a Washington Post story reporting that Trump had discussed with his lawyers whether he could pardon himself. His tweet said this: "While all agree the U.S. President has complete power to pardon, why think of that when only crime so far is LEAKS against us."

His new communications director, Anthony Scaramucci, appearing on CBS's Face the Nation, confirmed that the president had discussed the pardon question.

"[President Trump] just doesn't like the fact that he has a two-minute conversation in the Oval Office or in his study, and that people are running out and leaking that," said Scaramucci.

What are the limits of the president's power?

Presidents do have broad — but not unlimited — pardoning power.

A self-pardon would be "politically, a disaster," says Brian Kalt, law professor at Michigan State University and author of Constitutional Cliffhangers. "The main check on the pardon power is political accountability," he adds.

President Nixon decided against pardoning himself because he feared his reputation would be left in tatters. Nixon was willing to keep fighting, but his base in Congress was not. And that was critical, Kalt observes. "It was when the Republicans in Congress told Nixon that he had to go, that he knew that his time was up."

But Kalt, who has been writing about presidential pardons since 1996, notes that when Nixon faced impeachment, neither Congress nor the electorate was so dug in along partisan lines as they are now, and he worries that those Republicans willing to defy Trump if there were to be an impeachment proceeding, could "pay a political price."

The framers of the Constitution put the presidential pardoning power into the founding document in order to correct unjust prosecutions or convictions — both of which had occurred frequently in England.

At the Constitutional Convention, there was a proposal to exempt treason from the president's pardoning power — the notion being that if a president conspired with subordinates to commit treason, he should not be able to protect himself by pardoning fellow conspirators.

But the framers rejected the proposal because there were and are alternative remedies that were spelled out at the Constitutional Convention. Namely, "If he does that, we impeach him, and we prosecute him," according to Kalt. The law professor maintains that those last words — "and we prosecute him" — are important "evidence that the president can't pardon himself." After all, if a president could pardon himself, he could not be prosecuted.

The question of a presidential self-pardon has never been definitively resolved, of course, because no president has tried pardoning himself. Thus, there has never been a court test of the question. The Justice Department did issue a legal opinion during the Nixon administration saying that the president could not pardon himself because, under long-established law, no person can be the judge of his own case.

A majority of those weighing in on presidential pardons have agreed that the president cannot pardon himself. But some scholars have argued that he can. Professor Kalt suggests that the recent scholarly chorus confidently maintaining that the question has been resolved are "working the refs." Their confidence is more a matter of saying the president "can't do it because they want everyone to think that he can't do it," he says.

Presidents Ford, Carter and George H.W. Bush all issued pardons for those not yet charged or convicted

On some pardon questions there is no dissent. A president cannot issue a pardon for future actions; he can't pardon you in advance for something you do next week. The pardon power is reserved for past actions; and the president can pardon an individual even if he or she has not yet been charged or convicted.

In the current circumstance, there is no doubt that President Trump could pardon anyone that special counsel Robert Mueller is trying to leverage in order to get evidence. The president could, for instance, pardon his relatives, or his former national security adviser Michael Flynn. If Trump were to do that, Flynn could not avoid testifying by invoking his right not to incriminate himself. But without potential charges hanging over his head, what would prevent him from lying?

"That's the rub," says Kalt. If a pardon were granted in exchange for Flynn's silence, that would be a crime—but a crime that is exceedingly hard to prove.