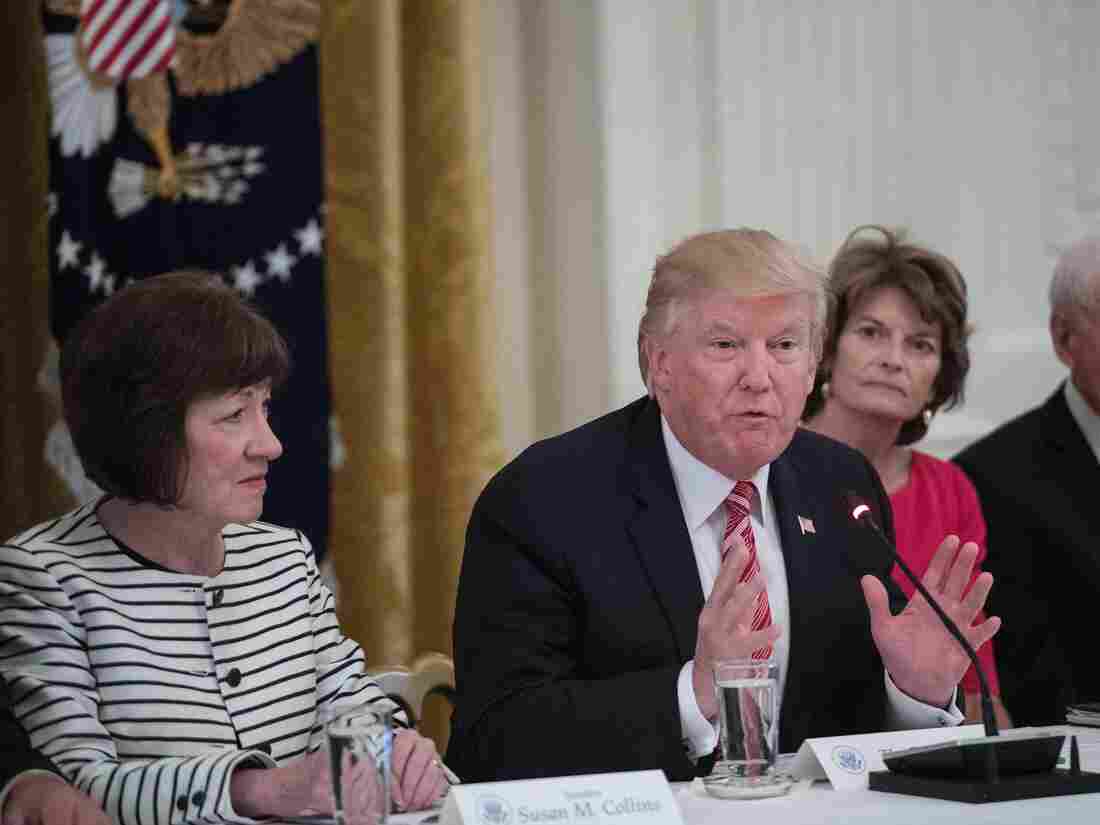 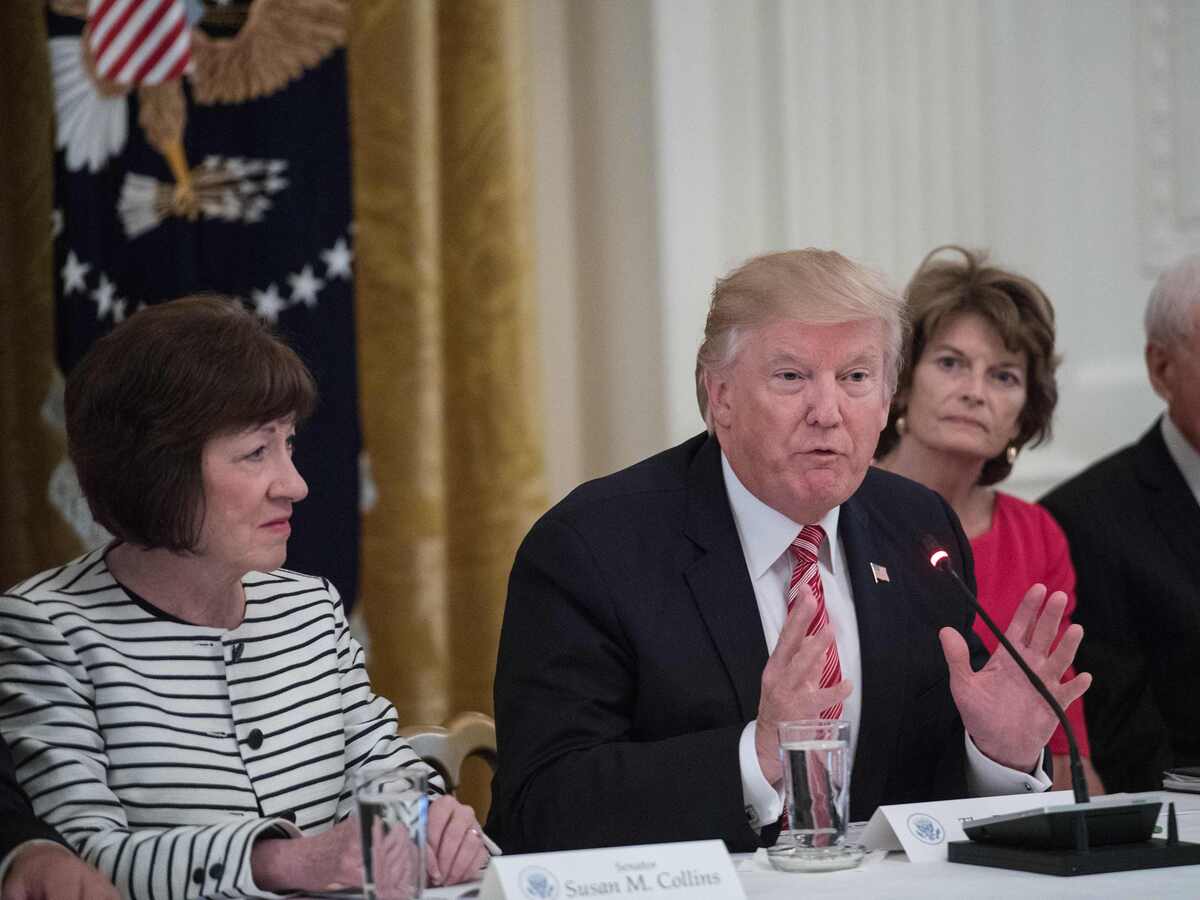 President Trump flanked by Sens. Susan Collins, of Maine, (L) and Lisa Murkowski, of Alaska, (R) as GOP senators meet with Trump to discuss the health care bill at the White House on June 27, 2017.

There are two types of applause in the climactic scenes of 1980s-era-movies: The kind where the underdog sinks a basket as the buzzer goes off and a thunderous applause emerges from the bleachers — a la Teen Wolf.

And then there's the quintessential, makes-everybody-cry-no-matter-how-many-times-they've-seen-the-movie slow clap. For a perfect example, look no further than Rudy.

Both leave audiences feeling exhilarated and vindicated. But the first stars an underdog, finally claiming victory over his nemesis. While the second is about an outcast, who never quite fit in — maybe did for a little while but then is cast back out into no-man's-land — before finally getting the recognition he or she deserves.

For many who wanted to see the Republican "skinny" health care bill fail, Sen. John McCain's "no" vote was the perfect kind of fodder for the first type of applause scene. In fact, Sen. Elizabeth Warren, D-Mass., broke into applause when McCain gave the now infamous thumbs-down.

But for those who've opposed every Republican version of a plan to repeal the Affordable Care Act without a fully fleshed out one to put in its place, early Friday morning was the culmination of months of opposition by moderate Sens. Susan Collins, R-Maine, and Lisa Murkowski, R-Alaska. In other words, the vote that was the death knell — at least for now — of the harried legislative effort should be remembered as a slow clap moment belonging only to the women who've been fighting a series of that they've called bad bills all along.

Collins and Murkowski have been unwavering in their opposition to their colleagues' efforts to undo the Affordable Care Act without also fixing many of the problems in health insurance coverage that plague the nation. And they weathered a slew of Twitter and talk radio attacks for their consistency.

On Wednesday, after she had voted against a motion to proceed, President Trump pilloried Murkowski on Twitter.

"Senator @lisamurkowski of the Great State of Alaska really let the Republicans, and our country, down yesterday. Too bad!" he wrote.

That was followed up by a threatening phone call later the same day from Interior Secretary Ryan Zinke who relayed a message from the president: If Murkowski continued to defy the party, Alaska's future with the administration would be in jeopardy.

It sparked a blip of outrage from a handful of lawmakers on Capitol Hill, but there was no concerted rallying cry against Trump or Zinke for attempting to twist Murkowski's arm in such a manner.

But, Murkowski, who is in her third Senate term, did not capitulate under the pressure.

Ana Navarro, a CNN commentator, lauded Murkowski for not giving in.

"I love this Lisa Murkowski story" Navarro said on CNN Friday. "I mean, do you understand that the president of the United States got his secretary of the Interior to call her on the phone and try to put pressure on her and bully her. And she responded, 'Sweetheart, let me remind you, I fund your department and you're not bullying me!'"

Speaking on a Texas radio show, Farenthold said, "Some of the people that are opposed to this, there are female senators from the Northeast... If it was a guy from South Texas, I might ask him to step outside and settle this Aaron Burr-style."

A few days later, Collins was caught by a hot mic in a conversation about the incident. "Did you see the one who challenged me to a duel?" she asked Sen. Jack Reed, D-R.I., before adding, "I don't mean to be unkind — but [Farenthold's] so unattractive, it's unbelievable."

The two Republicans subsequently apologized to each other.

Both Collins and Murkowski opposed the Better Care Reconciliation Act, as well as the attempts at a straight repeal of the ACA, for a variety of reasons. Collins repeatedly stated that the impact on the Medicaid program occasioned by the Republican pieces of legislation would be too severe. She also expressed concerns about plans to defund Planned Parenthood, which the "skinny" bill would have done for a year.

Similarly, Murkowski wants a new plan to include funding for Planned Parenthood and an expansion of Medicaid benefits.

Here is my following statement on the healthcare bill: pic.twitter.com/vNlGf8G3Uu

It is worth noting that Senate Majority Leader Mitch McConnell, of Kentucky, refused to invite any of the five women GOP senators to join the health care working group he convened to write the Senate legislation despite public criticism for the group's all-male membership. Capito attended a single session but was not asked to permanently join the bill-drafting team.

In the end, however, at least one woman got the applause scene some say she has long deserved. Exiting a flight from Washington, D.C. to Bangor, Maine, Sen. Collins was greeted in the airport with a spontaneous standing ovation.

This is true: Susan Collins on our plane to Bangor, gets applause as she passes through Bangor airport waiting area. pic.twitter.com/a1s2QTpldd