Accessibility links
'The Seventh Function Of Language' Is A Postmodern Mashup Of Fact, Fiction And Philosophy Laurent Binet's new novel starts with the death of French literary critic Roland Barthes and spins out a postmodern mystery packed with philosophical heavy hitters — and one bemused detective. 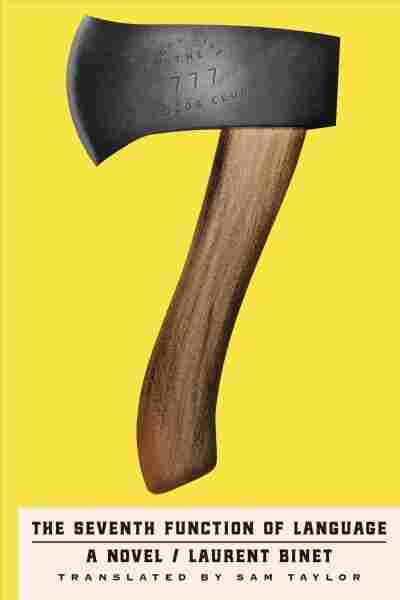 The Seventh Function of Language

by Laurent Binet and Sam Taylor

"Life is not a novel. Or at least you would like to believe so." That's how Laurent Binet opens his audacious second novel, an intellectual romp about the many ways language exerts power, particularly in politics and fiction.

The Seventh Function of Language spins a wild plot that begins with the (actual) death of literary critic Roland Barthes after being hit by a laundry van in Paris in 1980. With a lineup of characters plucked from the heavyweights of 20th century French linguistic and critical theory, including Jacques Derrida and Michel Foucault, and a postmodern mashup of texts, facts, and falsities, the novel is a cunning, often hilarious mystery for the Mensa set and fans of Umberto Eco's The Name of the Rose and Tom Stoppard's Arcadia.

It is also a fantasy that's perhaps less farfetched in France, in that it posits a world in which ideas and the intellectuals who debate them actually hold sway, even in politics — in this case, influencing the election of Francois Mitterand over the incumbent president, Valéry Giscard d'Estaing, in 1981.

In Binet's first novel, HHhH, about the assassination of Nazi security chief Reinhard Heydrich by two Czech resistance fighters, he repeatedly interjected his authorial two cents, pointing out where he'd taken liberties with his material. Although generally hailed as a tour de force, some readers questioned the light approach to the Holocaust and Heydrich — known as the Butcher of Prague, one of the most heinous figures in history.

... the novel is a cunning, often hilarious mystery for the Mensa set and fans of Umberto Eco's 'The Name of the Rose' and Tom Stoppard's 'Arcadia.'

Few are likely to object to Binet's playful sendups of the abstruse semiologists in The Seventh Function. To aid in this jocular cause, he's created a delightful comic foil named Jacques Bayard, a philosophically challenged investigator charged by Giscard (as he's called in the novel) with recovering a document concerning "a matter of national security" stolen from Barthes immediately after the accident. The document, Bayard learns, spells out a powerfully persuasive, "magical or incantatory" seventh function of language supposedly only hinted at by Russian linguist Roman Jakobson in his pioneering essays on the structural analysis of language — a secret weapon that could help win elections or debates.

The investigator, perplexed by terms like locutionary, illocutionary, and perlocutionary acts, quickly realizes "that he understands nothing, or not much, about all this rubbish." He requisitions a young linguistics PhD candidate, Simon Herzog, as his translator and sidekick.

Simon is a whiz at reading "signs" about people in the manner of Barthes' seminal book of essays, Mythologies, extracting meaning from non-verbal details like scuffed shoes and the make of guns or cars. But despite his smarts, he's frequently distracted by his hots for the women he meets on the case, causing him to miss important clues, like a sack of dog biscuits at a star-studded linguistics conference in Ithaca, N.Y.

In addition to some challenging thickets of language theory, the novel is packed with drama — car chases, mutilations, suicide, graphic sex, and multiple murders (including the French Marxist philosopher Louis Althusser's strangulation of his wife, which actually did happen in 1980, though not for the reasons stated). There are Russian spies, Bulgarian assassins, Venetian thugs, Japanese saviors, a wily North African gigolo — Foucault's pendant! — and a secret debating society in which the stakes range from digital amputation to castration. Sam Taylor's deft translation encompasses heavy linguistic exegeses, political discussions, oratory duels, and even some puns, including echo and Eco.

In addition to some challenging thickets of language theory, the novel is packed with drama — car chases, mutilations, suicide, graphic sex, and multiple murders.

Through all the hijinks, Binet's amiable academic does what he's been trained to do, analyzing the plot for "its narrative structures, its additives, its adversaries, its allegorical significance." Increasingly, Simon feels he's "trapped in a novel," and the pawn of a sadistic author, to boot. Hilariously, when he asks Bayard, "How do you know you are not living inside a work of fiction? How do you know that you're real?" the investigator replies, "Are you stupid or what? Reality is what we live, that's all."

Satire aside, The Seventh Function, like HHhH, is underpinned by Binet's concerns with the workings of language and fiction. He brings his experience reporting about Francois Hollande's successful presidential campaign to this outlandish tale of political scheming, though he reminds us repeatedly that this is a novel filled with counterfactuals, including Derrida's gruesome demise nearly 25 years before his actual death. He also brilliantly infuses even his serious points with sly humor, as when Morris Zapp, a fictional philosophy professor from David Lodge's campus novel, Changing Places, turns up at the Cornell linguistics conference to argue that "The root of critical error is a naïve confusion of literature with life."

Like Nabokov's Lolita, this wonderfully clever novel can be enjoyed on multiple levels. But to fully appreciate its ingenious metafictional complexities, be prepared to do some Googling — at least, until an industrious scholar comes along to produce an annotated version.