Accessibility links
Minneapolis Bridge Collapse: 10 Years Later, Infrastructure Still In Decline There have been some improvements, but there are still tens of thousands of bridges nationwide that need to be fixed or replaced. Federal funding for such needs has remained flat. 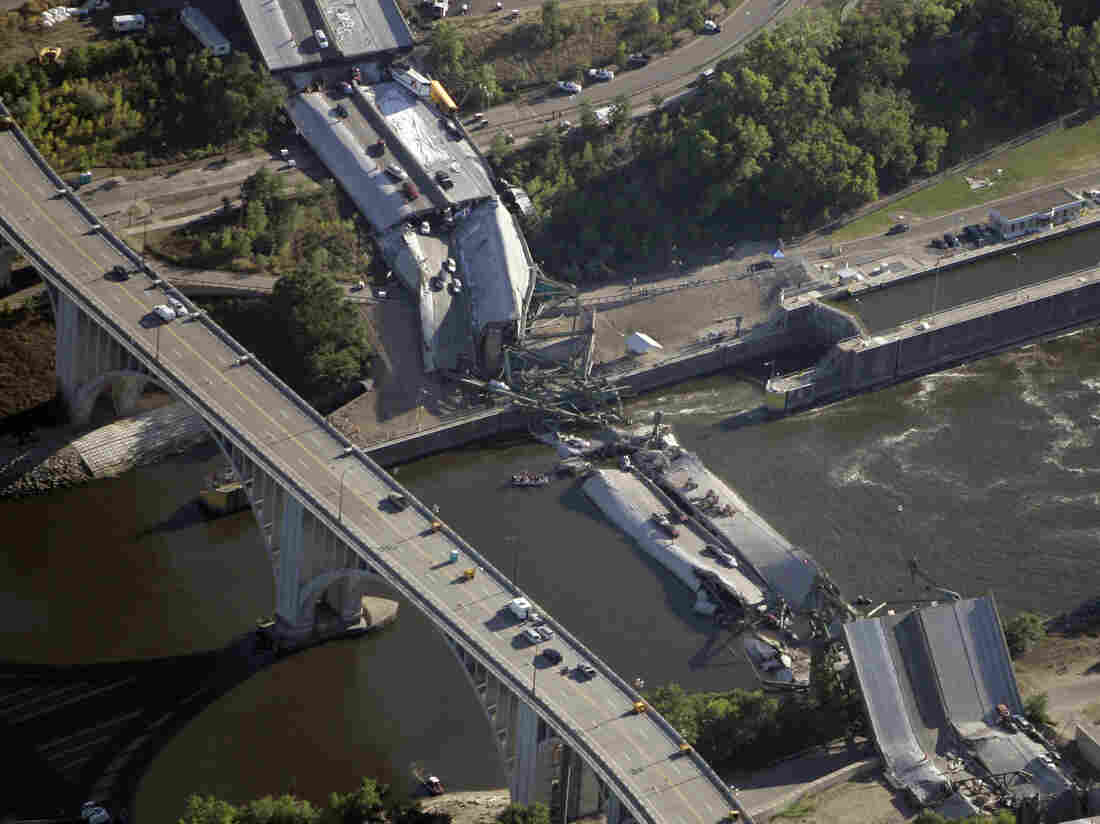 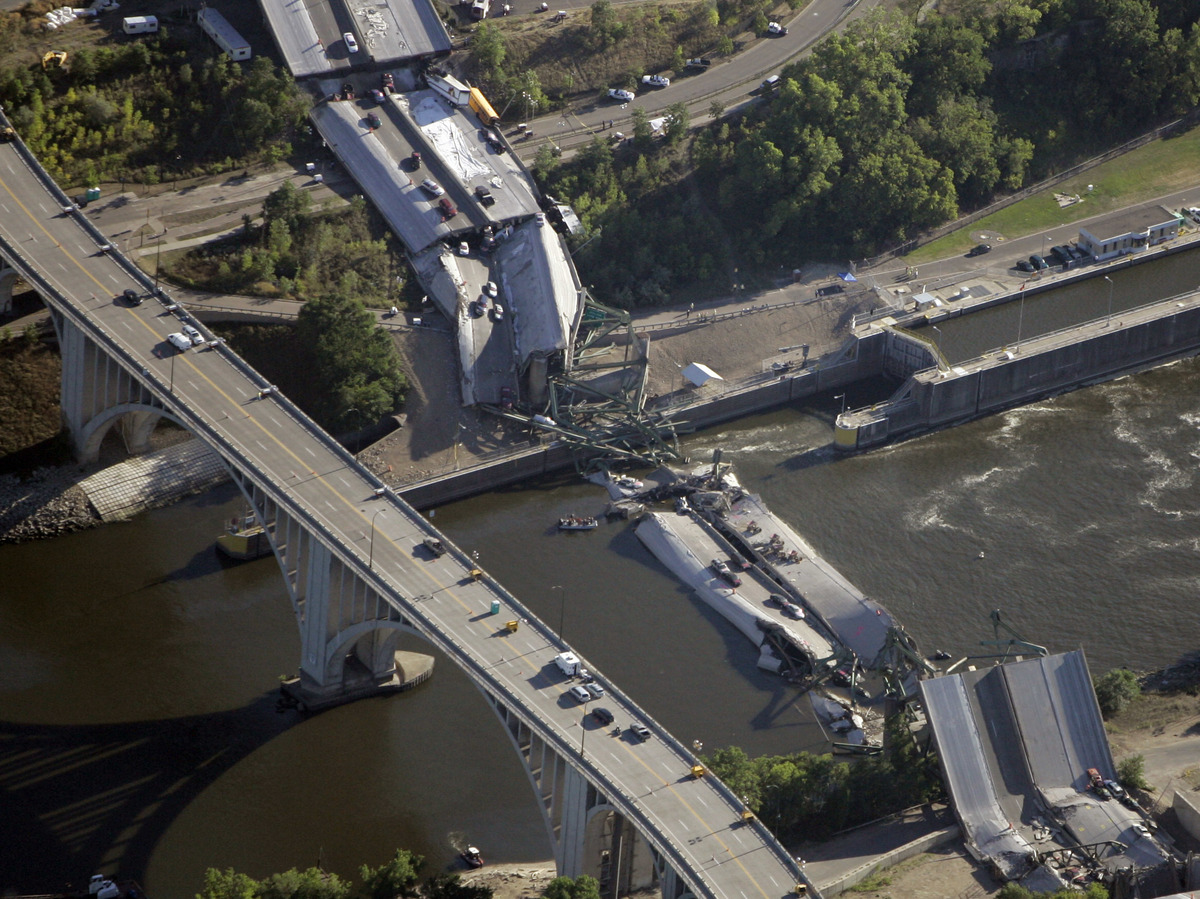 Ten years ago, the Interstate 35W bridge over the Mississippi River in downtown Minneapolis collapsed, sending cars, trucks and even a school bus that were crawling over it in bumper-to-bumper rush hour traffic plummeting into the river below and onto the rocky shore.

Thirteen people were killed, 145 more were injured, many of them seriously.

The bridge collapse sparked immediate calls in Minnesota and across the country invest big in repairing and replacing the nation's aging and crumbling infrastructure.

A decade later, experts say there have been some improvements, but there are still tens of thousands of bridges nationwide that need to be fixed or replaced.

In the immediate aftermath of the 35W bridge collapse, the Minnesota Department of Transportation came under intense scrutiny. The interstate highway bridge had been classified as structurally deficient, meaning that it was aging and in need of repair. In fact, some repair work was going on when it fell. And the bridge was also rated as fracture critical, meaning the failure of just one vital component could cause the whole bridge to collapse.

But in fact, neither of those classifications means a bridge is necessarily dangerous. And the National Transportation Safety Board determined that it was a design flaw, and not deferred maintenance, neglect, or other problems, that caused the 35W bridge to collapse. Gusset plates that hold the bridge's huge steel beams together were only half as thick as they should have been. The NTSB also found that nearly 300 tons of construction equipment and materials stockpiled on the bridge deck for the ongoing repair work contributed to the collapse by further stressing the crucial gusset plate that failed.

Nancy Daubenberger was still in the bridge office of the MnDOT just after 6:00 p.m. CT, when a colleague called with the horrifying and heartbreaking news.

"The first feeling was shock," says Daubenberger, then a bridge engineer for the state and now the director of engineering services for MnDOT. "The shock that came over me, that such a large bridge like that could collapse ... it was devastating and tragic and shocking; a very, very sad situation."

Daubenberger says the state immediately inspected gusset plates on every single truss bridge in the state to ensure that they were safe, and within months of the collapse, the Minnesota state legislature raised the gas tax and funded a $2.5 billion bridge improvement program.

"The bill established a program to have all structurally deficient bridges and fracture critical bridges repaired or replaced within 10 years, so by June 30, 2018," says Daubenberger.

The I-35W bridge was rebuilt within 14 months.

Daubenberger says 172 Minnesota bridges were identified as structurally deficient or fracture critical. About 35 of them were determined to need only routine, preventative maintenance. About 120 of them have been repaired or replaced, while the 18 remaining bridges are either under construction now and/or are on track to be repaired or replaced before next summer's deadline.

"I'm very proud of our accomplishments since 2008," says Daubenberger. "Unfortunately, it was a very tragic situation ... and we never want ever happen again and we're doing a lot of things differently now to ensure that sort of thing doesn't happen."

Minnesota has also stepped up and improved bridge inspections, and now even uses drones sometimes to take photos and video of spots on bridges that are difficult for human inspectors to reach. 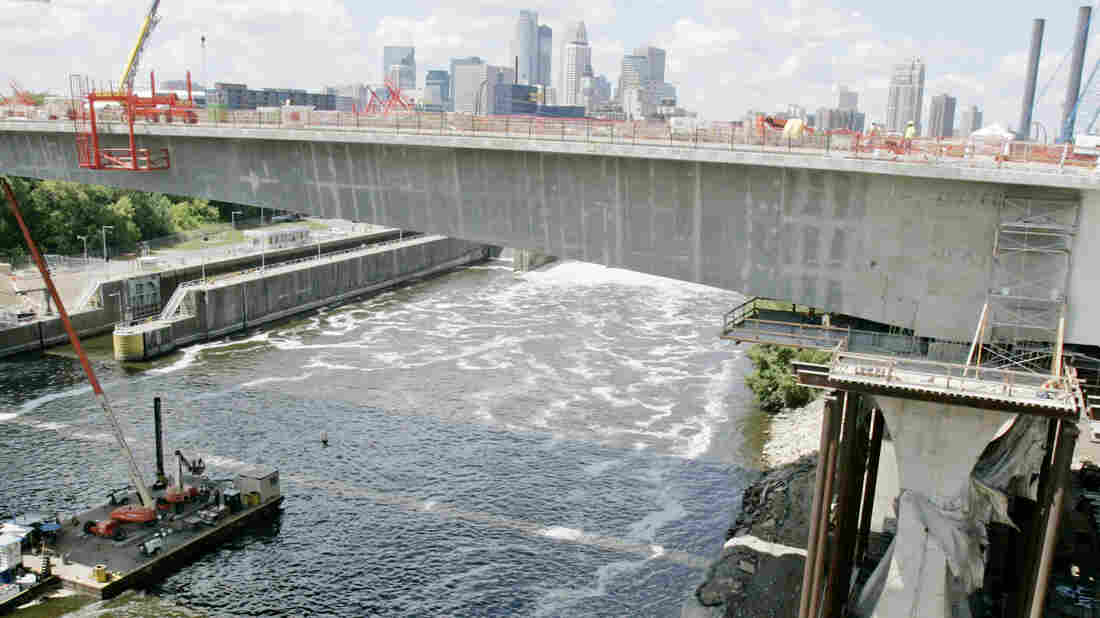 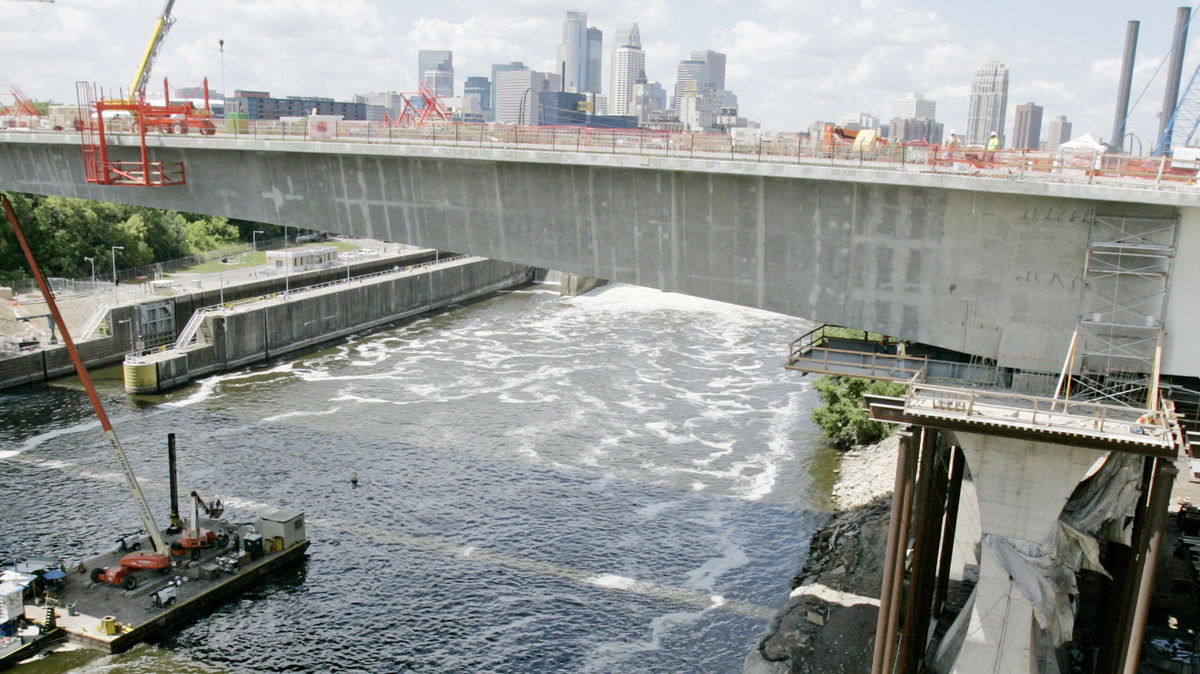 The new Interstate 35W bridge, which replaced the old bridge, seen in July 2008.

The state now gets outside independent peer reviews of bridge design plans, and it's revamped its bridge maintenance worker training program.

FACT CHECK: Trump's Claim That The 2009 Stimulus Built Nothing

"Certainly we've done a lot to ensure the safety of bridges so it doesn't happen again, so I feel confident about the advancements we've made in bridge design, construction, inspection, maintenance and that all works towards good bridge safety," Daubenberger says.

But while Minnesota has acted aggressively to reduce it's number of structurally deficient bridges, what about the rest of the country?

The American Road and Transportation Builders Association, which tracks the number of bridges with structural defects in each state, found 55,710 bridges nationwide that need to be repaired or replaced.

"That's a very costly item," says LaHood, adding that "most states simply do not have the money to take care of them, so they're patching them and they're doing the best they can to keep them in a state of repair where people can drive over them, but it's a serious, serious problem."

President Trump has promised to invest a trillion dollars on improving the nation's infrastructure, but other than a broad and vague outline of priorities and talk of leveraging private investment for projects, he has yet to unveil a plan.

With federal revenue lagging, many states have followed Minnesota's lead and increased their own gas taxes to fund bridge and road improvements. In the last four years, 26 states have raised gasoline taxes, including red states dominated by fiscal conservatives. That includes Indiana, Tennessee, South Carolina, West Virginia and Montana this year alone.

And state funding efforts, combined with a greater emphasis on bridge needs since the collapse, appear to be helping improve bridge conditions.

According to the American Society of Civil Engineers, 12 percent of the nation's bridges were rated as structurally deficient in 2007, but only 9 percent are in that category today.

Still, ARTBA, the builders' association, estimates it would take more than three decades to repair or replace all those more than 55,000 bridges that need it. It's a challenge that will no doubt grow as structures age and federal interest continues to lag.