Accessibility links
Kate Fagan On Trying To Understand 'What Made Maddy Run' Journalist Kate Fagan's new book digs into the life of a young woman whose suicide shocked the University of Pennsylvania, where she ran track. Madison Holleran's life seemed perfect, until it wasn't. 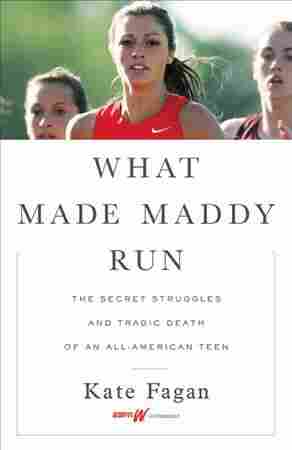 What Made Maddy Run

The Secret Struggles and Tragic Death of an All-American Teen

Madison Holleran ran track at the University of Pennsylvania. She was popular and beautiful — and raised in a big, supportive family in a New Jersey suburb. "By all accounts, Madison in high school was this young, happy, vibrant, wildly successful human being, who was destined — according to everyone around her — to do amazing things with her life," says sportswriter Kate Fagan.

And from the outside, Madison appeared to be thriving in college, too. But inside, she was struggling with anxiety and depression. Then, in the middle of her freshman year, Madison ended her life by jumping from a building in the middle of downtown Philadelphia.

The suicide raised a lot of questions about mental health on college campuses. And it got Fagan wanting to understand What Made Maddy Run — the title of her new book.

[W]hen you look around at Penn, you see "Penn Face," which is happy, easy, everything is coming naturally — whereas below the surface, everything is like this furious pedaling.

She did talk about it privately with her parents, not to such a level that I think they thought this was an imminent, desperate problem they needed to solve immediately. But it was hard for her to talk about it with those who were closest to her in college because she was on a competitive track and field team at a Division I school, and the focus there was on athletic performance, and the focus was on overcoming those hurdles to become a better athlete. And that's a hard environment to say, wait a minute, I'm struggling, and I can't put my finger on what it is; it's not something physical, it's something mental.

It's a term that those who attended or currently attend Penn used to describe this relentless pursuit of achievement, and when you look around at Penn, you see "Penn Face," which is happy, easy, everything is coming naturally — whereas below the surface, everything is like this furious pedaling.

A College President On Her School's Worst Year Ever

On the compulsion to edit our lives for social media

This was something that Madison dealt with constantly, was that she knew that she was projecting an image of herself that was not real, and she articulated that to people. And yet, when she looked at her very close high school friends and what they were projecting on social media, she took it at face value. And I think we all do that to some degree.

On how she researched the real Madison

Madison's family gave me Madison's computer, which contained her iMessages and emails that she sent, that I think give her voice and often show, actually, less than you'd think about her internal mental state. So much of what she communicated was punctuated with emojis or LOL or hahaha ... and you would know this was serious, but because it was done digitally and with this punctuation of emojis, it softens everything.

That's the big question right now, and I think when you compare the millions of dollars that are poured into the physical health of athletes with the small potatoes that are often put into their mental health, it's really easy to see why so many student athletes don't really feel like there's a place within the athletic department for them to speak openly about how they might be feeling.