Accessibility links
Trump Unveils Legislation Limiting Legal Immigration There has been a huge debate about immigrants who are in the U.S. illegally, but the administration is looking to cut the number of legal immigrants allowed into the country by half. 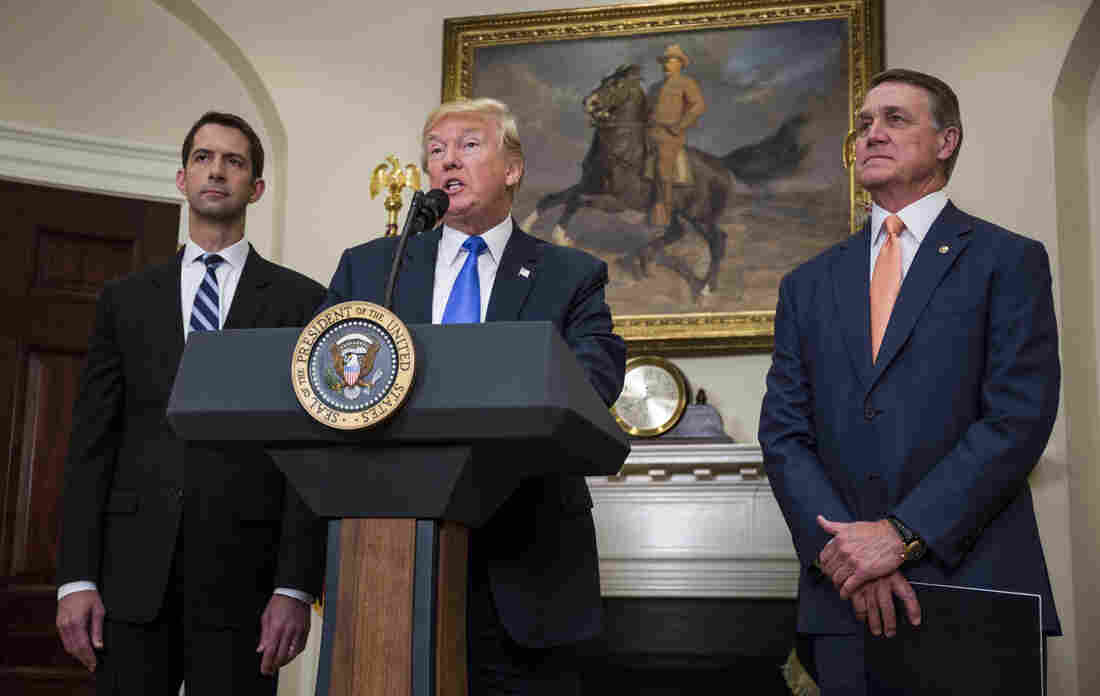 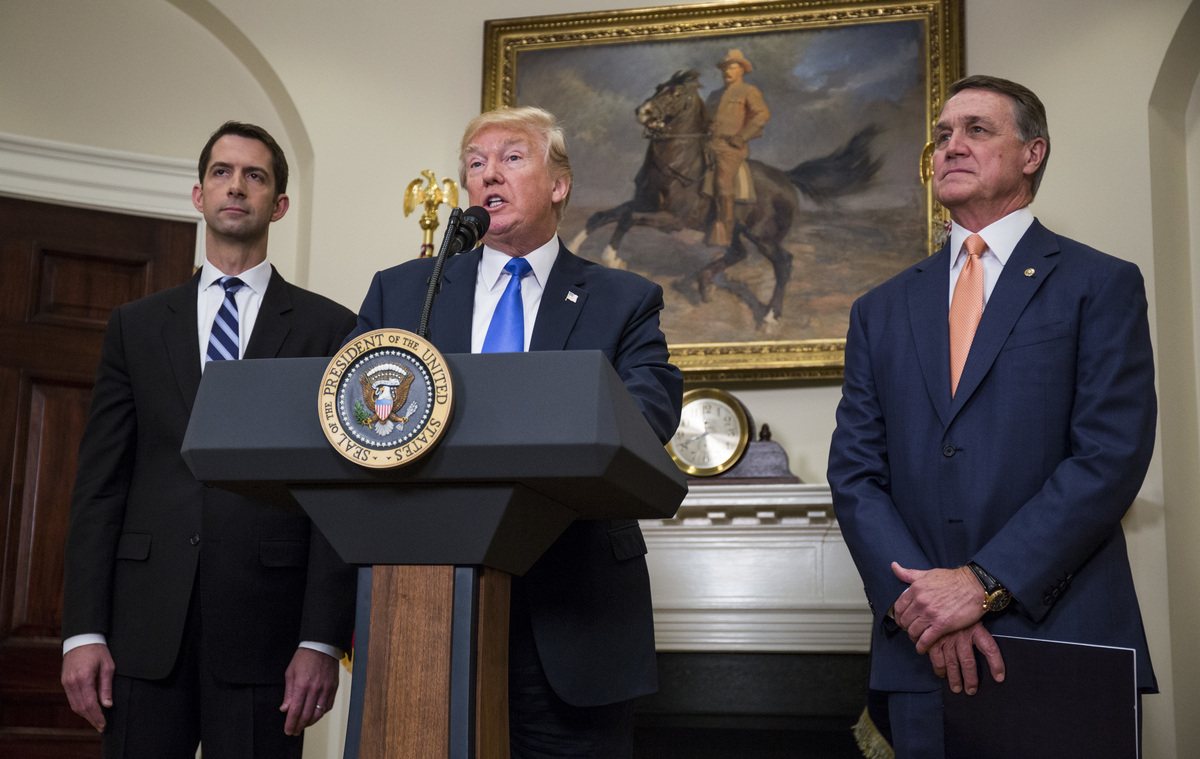 President Trump announces the introduction of the Reforming American Immigration for a Strong Economy (RAISE) Act with Sen. Tom Cotton, R-Ark. (left), and Sen. David Perdue, R-Ga., in the Roosevelt Room at the White House on Wednesday.

The president met at the White House with two Republican senators pushing the legislation, Tom Cotton of Arkansas and David Perdue of Georgia.

One of Trump's campaign promises was to reduce immigration, illegal and legal. The Cotton-Perdue legislation, also known as the RAISE Act (for Reforming American Immigration for a Strong Economy), would cut by half the number of legal immigrants accepted into the U.S. each year.

"Their bill would do three things: First, limit the number of foreign nationals who are able to get green cards to reunite with their families already in the U.S. — currently the largest category of legal immigrants; second, cut the number of refugees in half; third, eliminate the diversity visa lottery — a program that gives visas to countries with low rates of immigration to the United States.

"Cotton says the number of green cards awarded each year — about a million — is excessive.

Trump said the measure "will reduce poverty, increase wages and save taxpayers billions and billions of dollars." The current system, Trump said, "has not been fair to our people, to our citizens, to our workers." He said the new system would favor applicants "who can speak English, financially support themselves and their families, and demonstrate skills that will contribute to our economy." It would also prevent new arrivals from collecting welfare. 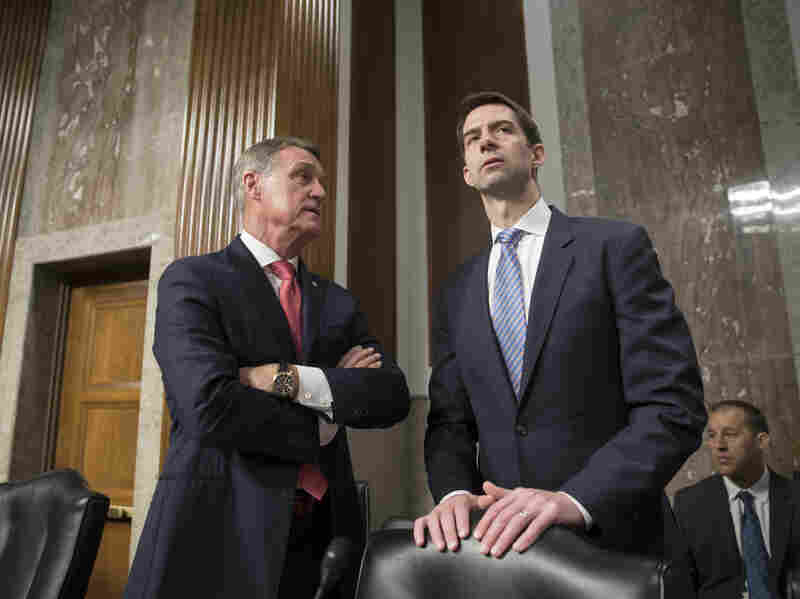 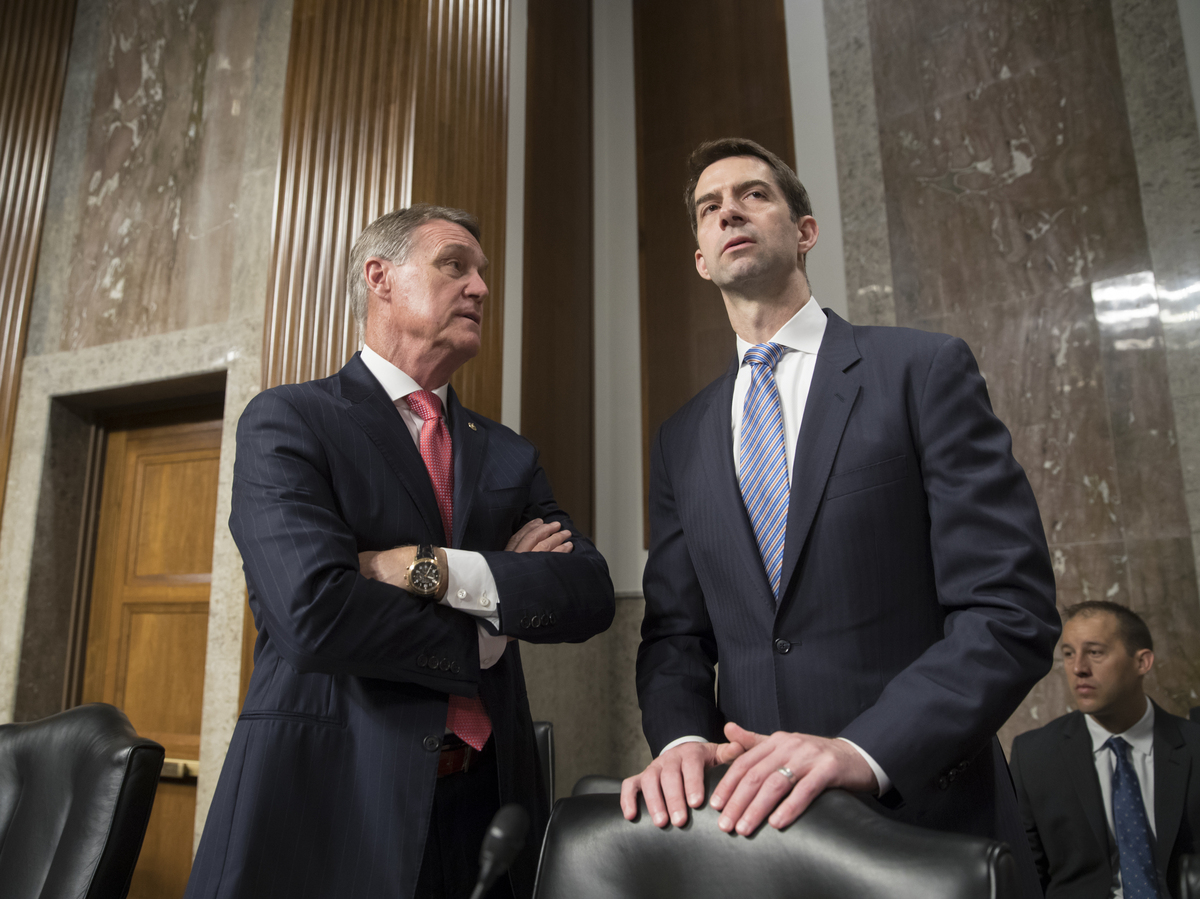 A White House official, speaking on background, says that the current immigration system "is outdated, and doesn't meet the diverse needs of our economy" and that the legislation being unveiled Wednesday "is aimed at creating a skills-based immigration system that will make America more competitive, raise wages for American workers and create jobs."

Attorney General Jeff Sessions said in a statement the proposal would "help the Department of Justice perform its duties to uphold our nation's immigration law and end the unlawful abuse of our public benefits program that undermine U.S. taxpayers."

Limiting legal immigration is opposed by business groups, which rely on low-skilled workers for agriculture and other jobs. And economists point to the low unemployment rate, 4.4 percent last month, as evidence that there are relatively few Americans who are without jobs now and that, as baby boomers retire, there will be a labor shortage.

But backers of stricter immigration limits say allowing unskilled people into the country keeps wages low, especially for workers with only a high-school diploma or less.

The Elusive Presidential Pivot Now Has A Name

A group of 1,470 economists released a letter to the president, saying that "the benefits that immigration brings to society far outweigh their costs, and smart immigration policy could better maximize the benefits of immigration while reducing the costs."

It's not clear how much support there is in the Senate for such a bill. Republicans such as Lindsey Graham of South Carolina and John McCain of Arizona are likely opponents, and there's little enthusiasm among Democrats.

Still, on the heels of last week's collapse of efforts to repeal and replace the Affordable Care Act, Trump is looking for a legislative victory, and with strong support inside the White House from advisers Steve Bannon and Stephen Miller, there is likely to be a strong push for the measure in the weeks and months ahead.