Accessibility links
Al Gore Warns That Trump Is A 'Distraction' From The Issue Of Climate Change "I have no illusions about the possibility of changing Donald Trump's mind," he says. Instead, the former vice president wants to build bipartisan consensus to address the crisis. 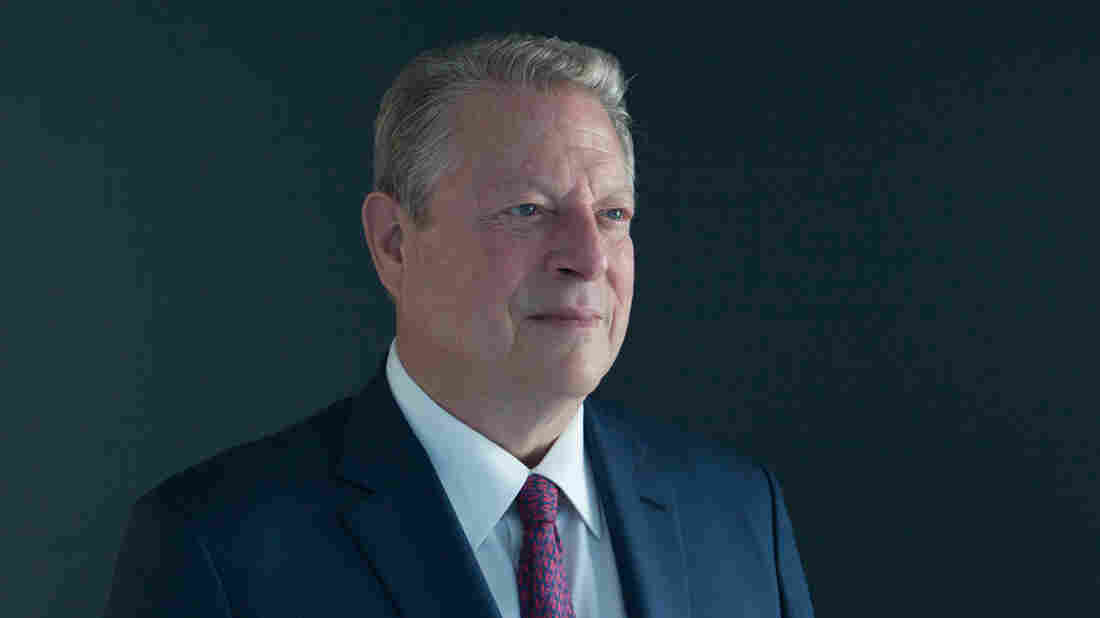 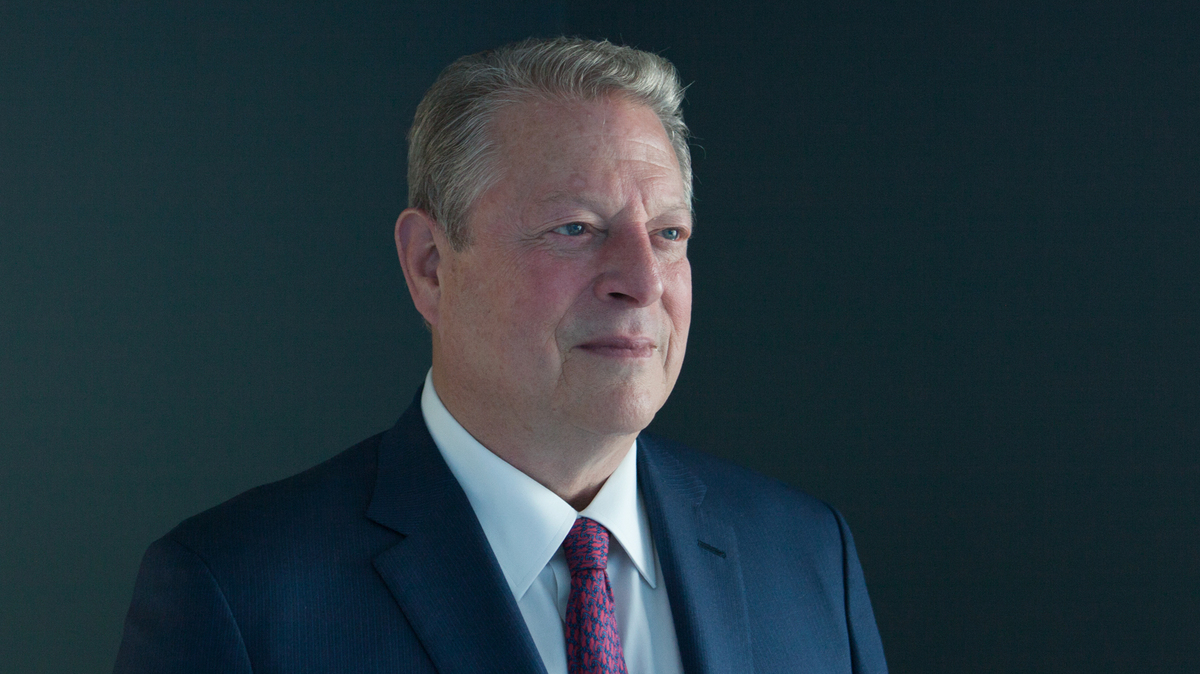 As a climate change activist, former Vice President Al Gore is used to speaking in front of both hostile and friendly audiences. But there is one individual he has all but given up on.

"I have no illusions about the possibility of changing Donald Trump's mind," Gore says. "I think he has made it abundantly clear that he's throwing his lot in with the climate deniers."

In withdrawing from the Paris climate accord in June, Trump said he "cares deeply about the environment" but argued that the deal imposed burdens on the U.S. that would hurt American workers "while imposing no meaningful obligations" on other leading polluters like China. Administration officials at the time sidestepped questions about whether Trump believed that climate change was a "hoax," as he had said prior to becoming president. When pushed in an interview on CNN, U.S. Ambassador to the United Nations Nikki Haley said, "President Trump believes the climate is changing and he believes pollutants are part of the equation."

Gore spoke with the president multiple times prior to Trump's announcement about the Paris accord. Gore is now focused on building a bipartisan consensus to address the climate crisis.

Part of creating that consensus is spreading awareness of an issue that Gore has been following for decades. His 2006 documentary An Inconvenient Truth, which was basically an adaption of his PowerPoint presentation about the effects of global warming, was a surprise box office success. Now he has a new documentary, called An Inconvenient Sequel: Truth to Power.

Despite Climate Change Setbacks, Al Gore 'Comes Down On The Side Of Hope'

Gore warns that climate change is not just an issue that affects future generations: "It's happening to us now. This movie is designed to drive those points home, but also to make people aware that in the last decade, the solutions to the climate crisis have become available to us."

On conversations he has had with Trump about climate change

I have taken the old-school view that conversations with a president should be kept confidential, but I will tell you that my simple focus was to convince him to stay in the Paris agreement and I had reason to believe that there was a real chance that he might. Previously, before his presidential campaign, he had signed a full-page newspaper ad demanding that President Obama take bolder action to solve the climate crisis, so I felt there might be something to work with, and there are some people in his inner circle who certainly do believe that we have to solve the climate crisis. But he has surrounded himself with a rogues' gallery of climate deniers, coming out of the fossil fuel industry, and I think it's rather obvious that they've gained control of his thought process on this issue.

I think he felt it was another way to throw a bone to his hardcore base. He's adopted the strategy of ignoring any effort to reach out to those who did not support him or to build broader coalitions across party and ideological lines, and seems to be counting on the fervor and passion of his shrinking base to keep him and his presidency afloat. I think that a part of his base has been particularly passionate in trying to deny the existence of a climate crisis.

On the "distracting quality" of the Trump presidency

One of the many problems he's posing for our country is the endless series of distractions — the new round of tweets, the new absurdities every day. When there's a new outrage, I feel as if I have to download some existing outrage onto a hard drive so I can make room for the new outrage. The distracting quality of what he says and does is very harmful to our country's ability to sustain our focus on the most important challenges we have. ...

I have no interest in access to the Trump White House. I have no interest in any further dialogue with him. I wouldn't rule it out, because who knows what circumstances could develop, but I have no reservation about withholding criticism of him on those grounds. I just don't want to contribute to the constant distraction that takes us away from what we ought to be focused on.

Mother Nature has a more persuasive voice than any of us.

[The fossil fuel industry] financed a major cottage industry of climate denial with pseudoscientists who crank out these phony pseudoscientific reports. Their principal product is doubt. They know they don't have to win the argument; they just have to create enough doubt to lead people to lose any sense of urgency about solving this crisis. They have made some headway. But again, because Mother Nature has a more persuasive voice than any of us, they're losing this battle. The Paris agreement was truly a historic breakthrough, illustrating that all around the world, opinions are getting stronger and stronger in favor of solving the climate crisis. We're the only country with a major conservative party wedded to provable idiocy on climate science.

On how technological advancements can help combat climate change

Electricity from the sun and the wind is now in many regions much cheaper than electricity from dirty fossil fuels. Electric cars are becoming affordable. Batteries are coming down very quickly in cost and, coupled with renewable energy, will utterly transform the world's energy systems. And along with sustainable agriculture and forestry, we now have a chance to use these tools to really solve the climate crisis in time to avoid the catastrophic consequences that would otherwise fall upon us.

I did envision that someone with the skills of an actor on the screen might become president, and it was not long thereafter that Ronald Reagan was elected. I think it's not coincidental that someone like Donald Trump with not only the skill set of a reality TV star and the social media skills of what he has become, the tweeter in chief, was successful in today's media environment.

I do think that we need to reclaim the integrity and functionality of our constitutional system, and I hope that we'll see continued progress in moving the forms and patterns of democracy onto the Internet — which, with all of its many problems — the echo chambers and all the rest — nevertheless [restores] the ability of individuals with command of the facts and the ability to express themselves clearly to attract those who agree with their point of view and use knowledge as a form of power that substitutes for great wealth or force of arms.

Lauren Krenzel and Thea Chaloner produced and edited the audio of this interview. Bridget Bentz, Molly Seavy-Nesper, Shirley Henry and Dana Farrington adapted it for the Web.