Accessibility links
Review: Alex Williams, 'Better Than Myself' The 26-year-old country singer is a student of old-line outlaw country and its tradition of leathery, knowing tall talk.

Review: Alex Williams, 'Better Than Myself'

Review: Alex Williams, 'Better Than Myself' 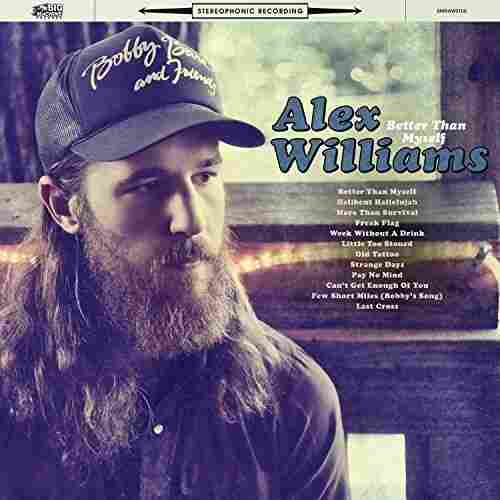 Alex Williams, Better Than Myself. Courtesy of the artist hide caption

The perception that down-to-earth plainspokenness is a quintessential quality of country music tends to obscure the fact that exaggeration has long been a choice tool of country music-makers, too. In the hits of this decade — when hip-hop's influence has surfaced not only in country production techniques, but the cadences of vocal deliveries and the postures struck in lyrics and performances — this sometimes takes the form of materialistic swagger (i.e. luring attractive women into a "brand new Chevy with a lift kit" or a "big, black, jacked-up truck" that's "rollin' on 35s." Over time, though, the embellishment of rough behavior and rotten luck in songs ranging from Loretta Lynn's "Fist City" and Johnny Cash's "Busted" to Garth Brooks' "Friends in Low Places" and the Dixie Chicks' "Goodbye Earl" has been a reliable diversion for country audiences, and made their own troubles feel less insurmountable.

When one of the underdog protagonists on Alex Williams' debut album, Better Than Myself, is confronted with criticism of his alcohol intake, he spins his stubborn refusal to change into outlandish yarns. "Gonna sell off a couple kidneys, buy a starship, fly that thing out west to San Antone," Williams vows, conveying teasing nonchalance with his baritone twang. "Gonna wrangle them armadillos with a bullwhip, start a polka band, then rock the Alamo." All of that serves to set off the bravado of the hook, which he delivers with considerably more vigor: "Before I go a week without a drink / Well, the day's too long and life's too short / to ride on the wagon, dang."

Williams is a long-haired, scruffily bearded singer and songwriter from small-town Indiana, who's plied his trade in Nashville since bailing on Belmont University. He distinguishes himself from stylistically fluid millennial peers by following the old-line outlaw country lineage and its tradition of leathery, knowing tall talk. He signaled his admiration for Willie Nelson by enlisting Nelson's longtime harmonica player, Mickey Raphael, to play a few lonesome licks on his album, and pays permanent, visible tribute to Waylon Jennings with a tattoo of the winged "W" logo on his forearm. (Williams' press bio credits the music of both artists, initially encountered in his grandparents' record collection, with setting him on his course.) Better Than Myself also betrays the influence of a more recent predecessor: Jamey Johnson. It was nearly a decade ago that Johnson emerged from industry frustrations with That Lonesome Song, smuggling sophisticated ruminations under the cover of a menacing ex-con persona. Like Johnson did on that album, Williams' relies on phenomenal performances from a hard-twanging, loose-limbed band — made up of first-call session players in Williams' case — whose licks spill into the transitions between tracks.

It's a sign of Williams' self-awareness that he opens his album with the title cut, a song that acknowledges tensions that sometime exist between what a person sings and who he is in real life. "Someone told me not long ago that my songs are better than myself," he reports with wry composure. "That the reckless way I'm livin', it don't match my melodies. That the written words I'm singin', they ain't got no honesty." The idea for the song, he's said, came from the way that his former drummer expressed disappointment in him as their band, Williams & Co., limped toward its end. By expanding on that rebuke, Williams establishes his self-deprecating persona and demonstrates his grasp of how authenticity is actually reckoned in the country world.

That can be easy to miss when the country music industry gets hung up, for instance, on the idea that what makes Chris Stapleton the real deal is how insulated his rugged soulfulness is from contemporary pop influences. It matters just as much that Stapleton is so compellingly believable in his role of weathered, wisdom-filled, emotionally tough mountain man. In country music, the aesthetic choices artists make don't stand apart from how fully they're integrated into the personas they embody.

Williams sure seems to get that. He's all of 26 years old, and nailing the part of the stoned, admirably stubborn, veteran individualist. He's filled his album with familiar turns of phrase, whittled down and repurposed. His slouching characters trust very little in the world other than experience. His 18-year-old self makes an appearance in the dusty story song "Few Short Miles," idolizing a bar fly more than twice his age, who shares with him a wealth of proverbs and a vintage guitar salvaged from a dumpster.

Williams' finest moments are his most easeful ones. In "Can't Get Enough of You," a track whose insouciance is underscored by its gently swinging, Jennings-esque groove, he juxtaposes the unlikelihood of choosing all six winning Powerball numbers with the immediacy of feelings of infatuation. In the spry, loping "Pay No Mind," he conveys disinterest in political and religious rhetoric, further mellowing his vocal attack at the end of particular lines and letting their final words dissolve like smoke in the air. In "Freak Flag," an ambiguous kin to Kacey Musgraves' live-and-let-live number "Follow Your Arrow," he chalks imaginative boasts up to personal quirks. "Give me a spool of thread and I'll make the Golden Gate," he ventures. "You got a bag of rocks, well, I'll pave the interstate." Then comes the equalizing shrug: "People are weird and so am I / Lay it on back; let your freak flag fly."

The secret Williams has already learned? How to make the whoppers go down easy.