Accessibility links
Our Critic Doesn't Entirely <3 'The Emoji Code' Vyvyan Evans' new book about the rise of emojis casts the little icons as part of human language's long-running struggle to evolve — but too often it reads like a textbook, didactic and dry. 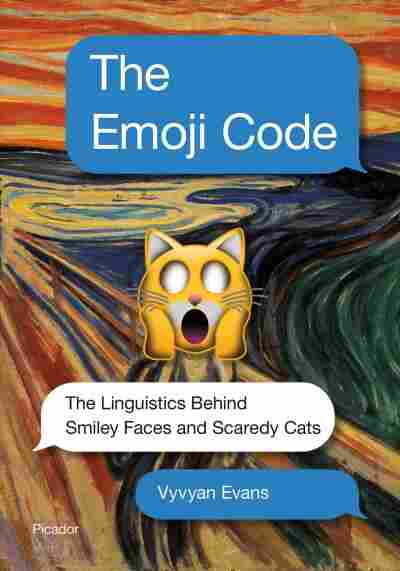 The Linguistics Behind Smiley Faces and Scaredy Cats

There's no ignoring emojis. Subtly yet inexorably over the past few years, those tiny, graphic symbols representing happiness and frustration — not to mention an increasing host of other emotions, actions, and objects — have become ubiquitous. And the more we rely on text messaging and social media for communication, the more the use of emojis has become second nature. In his new book The Emoji Code, professor and linguistics expert Vyvyan Evans sheds light on how and why this new language he calls Emoji came about — and where it might be headed.

Subtitled "The Linguistics Behind Smiley Faces and Scaredy Cats," The Emoji Code traces the birth of emojis back to the software engineer Shigetaka Kurita, who devised a series of infographics-based symbols to display on the limited screens of early smartphones. It was, in essence, a workaround, one designed to circumvent the technical shortcomings of those devices. But as emojis spread, their universal and intuitive nature led to a viral explosion, an open-source language that spread throughout the digital world like wildfire. As Evans asserts, "Emoji adds more than a splash of color to our digital alphabet. It provides a visual form of communication that is both resonant and powerful."

A Brief History Of Food Emoji: Why You Won't Find Hummus On Your Phone

In full professorial mode, Evans breaks down emojis along several different lines: as metaphor, as populist expression, as technological phenomenon, and as political issue. He singles out, among others, the British politician Michael Gove for his efforts to control how language is and isn't supposed to be used — an effort toward keeping English ostensibly proper that Evans renders downright chilling in its abuse of power and hypocrisy. For Evans, language is power — and accordingly, the book takes a wider view. Emojis may be relatively new, but they're also part of human language's long-running struggle to evolve, despite those who would set language in stone, and thus hold it back.

Evans is a regular presence among university presses, but The Emoji Code is his first book-length foray into mainstream pop-science writing. It shows. Apart from a few vivid and well-placed anecdotes — including a gripping opening scene about a teenager arrested for allegedly making a terrorist threat composed entirely in emojis — Evans' text is heavy with jargon, charts, and statistics. While it's clear he's making the attempt to be conversational, and at times winningly succeeding at that, The Emoji Code too often reads like a textbook, didactic and dry. It gives rise to a nagging irony: In his praise of emojis as a simple, unifying language, he resorts to a dense thicket of terms and information.

'The Emoji Code' isn't entirely convincing in its ardent advocacy of smiley faces and scaredy cats, but it's still an illuminating look into the origins, development, and relevance of this bold new language.

"Some argue that Emoji is a step backwards to the dark ages of illiteracy, making us poorer communicators," Evans writes. "But this view is nothing more than ill-informed and blinkered cultural elitism." It's an impassioned claim, but Evans builds too much on this binary — that people are either violently for or violently against emojis, or even that most people are truly that worried about their rise in the first place. Tarring all critics of emojis with the same broad brush doesn't help — at one point, he compares the pairing of emojis and conventional written language to an actor's nuanced interpretation of Shakespeare's words. Although he does so in a forceful fashion, his analogy feels like an overreach.

There's no denying that emojis have become a vital element in everyday discourse, one that's likely here to stay in our increasingly tech-driven world, for better or for worse. The Emoji Code isn't entirely convincing in its ardent advocacy of smiley faces and scaredy cats, but it's still an illuminating look into the origins, development, and relevance of this bold new language.