Accessibility links
Movie Review: 68 Kill Many noir thrillers play with misogynistic ideas, but "68 Kill keeps the hostility and loses the self-deprecation, which turns it into an example of misogyny rather than an examination of it." 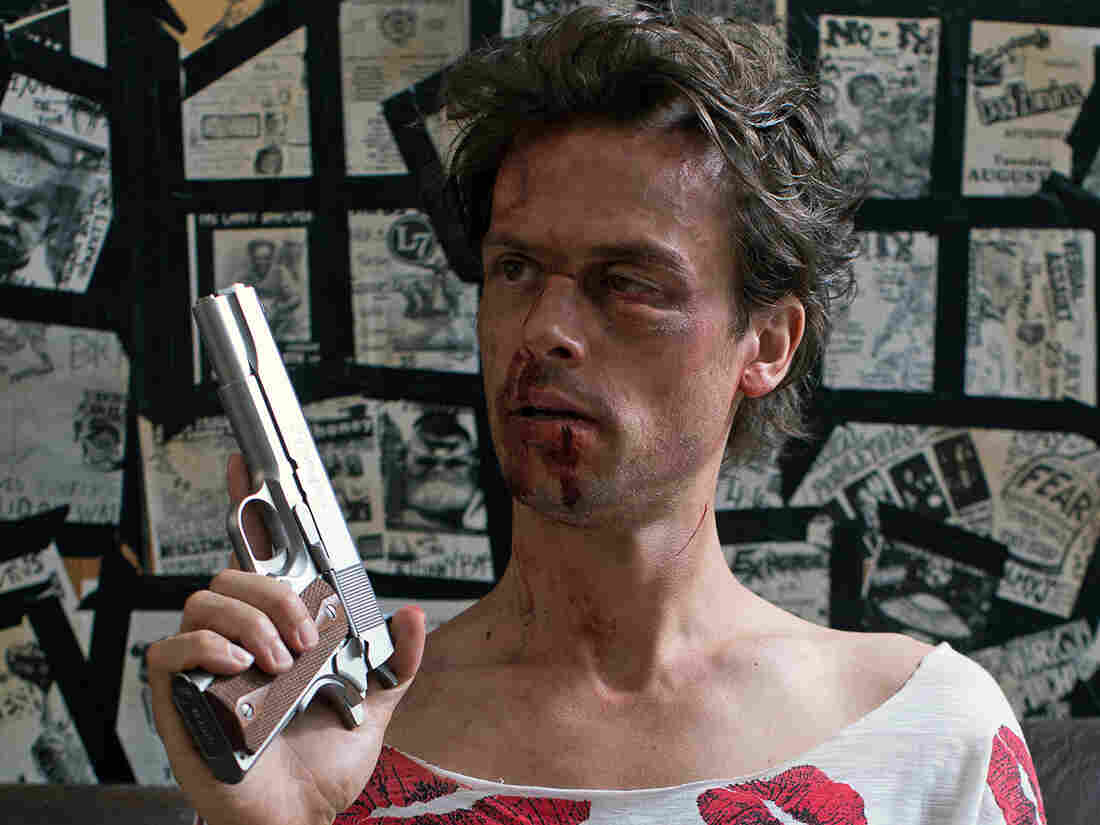 68 Kill stars Matthew Gray Gubler as Chip, a hapless schmo who gets more than he bargained for after he and his girlfriend plan to steal $68,000. Alfonso Bresciani /IFC Midnight hide caption 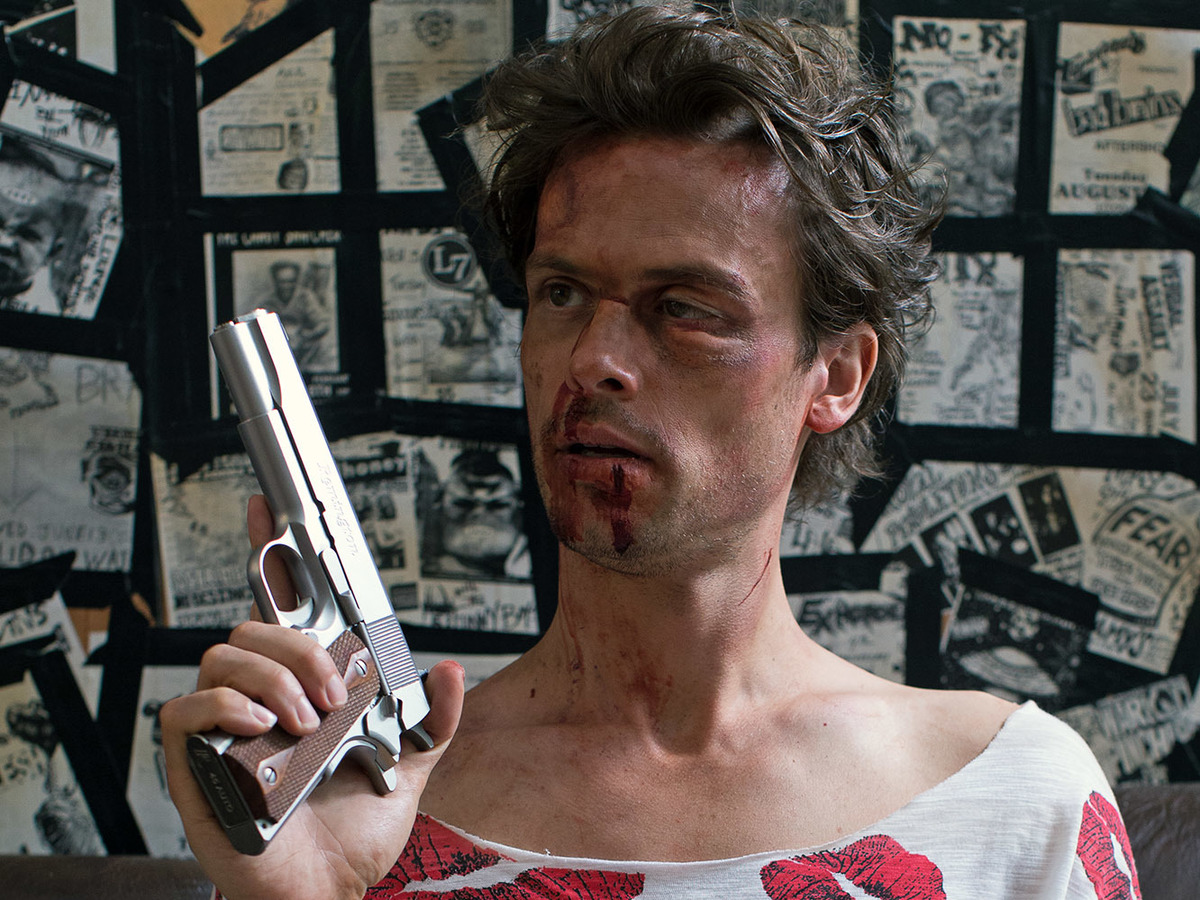 68 Kill stars Matthew Gray Gubler as Chip, a hapless schmo who gets more than he bargained for after he and his girlfriend plan to steal $68,000.

When Martin Scorsese directed the nervy black comedy After Hours in 1985, it was both a catharsis and a reckoning, a means to reenergize himself after The King of Comedy flopped and address the hang-ups with women that united many of his characters. Instead of the jealous brutes in Mean Streets, Taxi Driver, and Raging Bull, that film follows an ineffectual office drone, played by Griffin Dunne, as a hoped-for sexual liaison turns into a luckless, surreal night in New York City. Women prove his primary obstacle, trailed closely by Murphy's Law, but there's a measure of self-deprecation that frames their hostility, like the universe punishing Scorsese's put-upon hero for his failure to comprehend the opposite sex. Dunne's character may not be Travis Bickle or Jake La Motta, but he shares some of their regressive attitudes.

Nearly a de facto remake of After Hours, writer-director Trent Haaga's lively trailer-park thriller 68 Kill keeps the hostility and loses the self-deprecation, which turns it into an example of misogyny rather than an examination of it. Winner of the Audience Award in the Midnighters section at this year's SXSW, the film is another night-in-the-life scenario about a passive guy confronted by dangerous and irrational women, but it doesn't reflect on its premise for a second: the notion that women are crazy goes largely unchallenged. The takeaway is that good men should get wise to that fact and stand up for themselves.

Opening with a shot of a fly stuck in honey — block that metaphor! — 68 Kill offers a Pooh-sized jar of it in Liza (AnnaLyne McCord), a foul-tongued sexpot who's living with the one man on Earth incapable of seeing her duplicitous nature. Working a dead-end job cleaning septic tanks, Chip (Matthew Gray Gubler) can't pay the rent on his broken-down trailer home alone, so Liza makes up the difference by sleeping with their rich landlord on the side. When Liza spots the landlord tucking $68,000 in a safe, she ropes Chip into an ill-conceived burglary scheme that leaves two people dead, lands a fetching captive named Violet (Alisha Boe) in their car trunk, and sends them on the lam.

There's a reason why 68 Kill won an Audience Award at SXSW: It has the virtues of shock and speed, qualities that Haaga refined during his time at Troma Entertainment, the legendary indie exploitation unit responsible for films like The Toxic Avenger and Class of Nuke 'Em High. (Haaga co-scripted Citizen Toxie: The Toxic Avenger IV.) There's not an ounce of fat in the plotting, either, which presents Chip with an escalating series of mishaps that shake his naive assumptions about human nature. The robbery isn't a slippery moral slope for Chip so much as a toboggan run greased with lard, and Haaga commits to the illicit thrill of careening down alongside him. Here's a film where a character brushes off her brother's yen for serial murder and dismemberment with the line, "What he does is his own business."

Beneath the deadpan comedy and relentless ultra-violence, 68 Kill suggests the underlying economic desperation that makes its characters act as they do. Chip doesn't bother locking the door to his trailer because "there's nothing there worth taking," and the willingness of virtually everyone to deceive, maim, or kill whoever stands between them and the $68,000 is telling. Cleaning septic tanks, turning tricks, working night shifts at the convenience store — these are humbling jobs with no future, and the money smells great.

Yet the thematic core of 68 Kill is not money but women, who persistently torture and manipulate Chip until he finally gets wise to them. Haaga tries to mitigate the onslaught of femmes fatale through a character who seems to have Chip's best interest at heart, but she and the film end in a disturbing place. And therein lies the difference between 68 Kill and After Hours: At the end of the night, Scorsese's hero learns something about himself and is reborn. Haaga's learns something about women and mans up accordingly.