Accessibility links
Detroit A skilled director of visceral, real-world horrors, Bigelow dramatizes a 1967 incident that left 3 young black men dead at the hands of the police. The result is unflinching and effective. 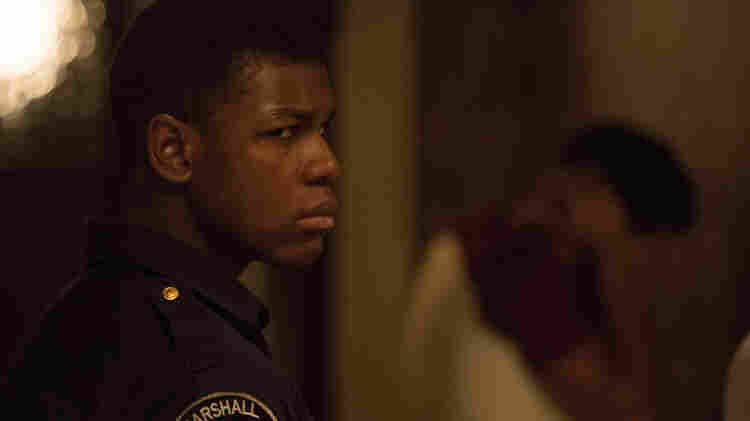 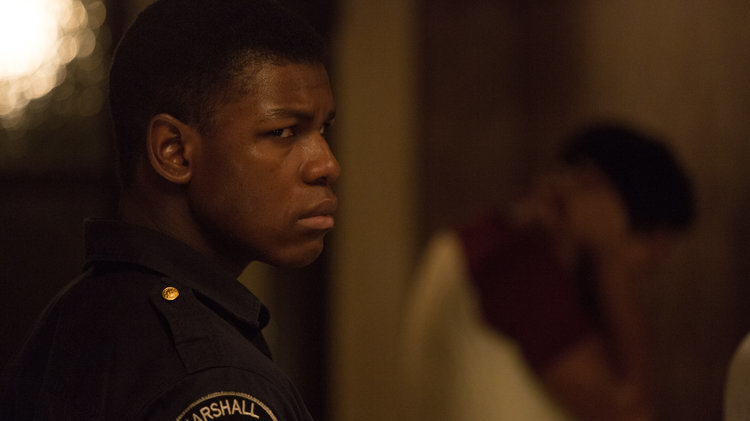 Twenty-two years ago, Kathryn Bigelow made Strange Days — a paranoid thriller written and produced by her former spouse James Cameron, set in the then-future of 1999. Inspired in part by the 1992 Los Angeles riots — which were sparked by the acquittal of the LAPD officers who'd beaten Rodney King near to death — the movie's plot involved the murder of black hip-hop artist "Jeriko One" by a pair of white Los Angeles cops.

As ambitious as it was unwieldy, Strange Days flopped so hard that Bigelow's career took years to recover. But she landed on her feet, becoming the first and so far only woman to win the Academy Award for best director, for the Iraq war movie The Hurt Locker, which also won best picture. Her follow-up, Zero Dark Thirty, got a Best Picture nod, too. And that's how a sexagenarian woman in Hollywood earns the juice to make a movie like the incendiary new Detroit — Bigelow's vivid, inevitably divisive reenactment of a real 1967 incident wherein three Motor City police officers were charged in the killings of three adolescent black men while the city was under martial law following riots.

Seemingly in a position to make any movie she wanted, she chose a lightly fictionalized historical drama that bares a striking resemblance to her little-seen Angela Bassett-starring sci-fi flick from 1995. (Strange Days even climaxes in a riot touched off by white police using excessive force on a black suspect, which is where Detroit begins.)

Until now, the highest-profile accounting of what happened that night was John Hersey's 1968 book The Algiers Motel Incident. (Hersey's estate declined to sell Bigelow and screenwriter Mark Boal the rights, The New York Times reported.) Detroit isn't as dispassionate as that. Just as the movie Hidden Figures buffed and polished the story told in the eponymous nonfiction book for maximum uplift, Detroit heats and sharpens the facts that formed it for maximum outrage.

Not that those facts weren't outrageous already: In the case Detroit revisits, the cops were acquitted after the confessions they gave and then recanted were ruled inadmissible in court. That's a cruel irony, because it was in their attempt to coerce confessions from the young men they'd confined in Detroit's Algiers Motel — a $6-a-night flophouse that the law considered a den of sin --that those out-of-control cops resorted to intimidation, torture, and finally murder. (The presence of two white girls from Ohio among all those black men appeared to inflame the cops' further — they accused the women of prostitution, stripping and beating them.) The police claimed a sniper had fired upon them from inside the motel, but they never recovered a rifle from the scene. Detroit subscribes to accounts from several witnesses that the shots that summoned the police came from a starter pistol fired first as a stupid prank, then as an impotent and costly gesture of defiance. Carl Cooper, the 17-year-old who'd allegedly fired it, was the first to die that night.

One of the witnesses who testified for the prosecution, and who said he was assaulted by the accused policemen himself at the Algiers, was a musician. Singer Larry Reed quit his vocal group The Dramatics after that hellish night in 1967; the group broke out a few years later and had a long career without him. (They're still touring.) Reed was one of the incident's key figures that frequent Bigelow collaborator Boal interviewed while working on the movie. And though Boal's research team included Pulitzer Prize-winning Detroit Free Press reporter David Zeman, he has used his artistic license to plug some gaps in the legal record. (Other limits on the film's authenticity were merely budgetary, like the fact that tax incentives resulted in most of Detroit being filmed on location in... Boston.)

Boal's script commingles real and fictional people: Real-life witnesses Melvin Dismukes, Julie Hysell, and Larry Reed (played onscreen by John Boyega, Hannah Murray, and Algee Smith, respectively), are represented, but the brutal cops in the movie have different names than the officers who were eventually acquitted of the Algiers Motel killings. Their ringleader is played by Will Poulter, a redheaded, freckled 24-year-old English actor whose permanently right-angled eyebrows make him look like the satanic cousin of MAD magazine mascot Alfred E. Neuman. "We've failed these people," he says early in the film, sounding like a peace-loving Hubert Humphrey voter moments before he fatally shoots one of "these people" in the back on suspicion of stealing groceries. A detective tells him he's recommending that the District Attorney file murder charges against him, but Poulter's character is sent right back out to active duty in the meantime. Did this really happen? Well, there was a riot on.

Other credulity-straining aspects of Detroit appear to be factual: For one thing, Dismukes, a private security guard called in to protect a store near the Algiers from looters, was allowed to enter the Algiers with a weird coalition of Detroit cops and National Guardsmen and remain at a crime scene for hours while trying, ineffectually, to prevent the cops from brutalizing their suspects. (Boyega radiates Denzel-like calm in the face of the storm, proving that the way he livened the The Force Awakens was no fluke — he's a bonafide movie star. And to see him in a role where he's essentially helpless is unusual, and compelling.) In real life, Dismukes was charged with the felonious assault of two of the suspects and tried before any of the three cops accused of more serious offenses were; an all-white jury acquitted him. To the extent Detroit addresses this, it implies an unsuccessful attempt by the police to frame Dismukes for their own wrongdoing.

I'm also curious to know whether another one of its plot points is historical or invented: When Michigan State Police arrive at the Algiers, the ranking officer among them decides he wants no part of the "civil rights mix-up" the Detroit P.D. has already created, so the state troopers just drive away. What's the expression? Huge if true.

Bigelow and Boal's recreation of a 50-year-old police brutality case seems bound to be as controversial as their last project, 2012's Zero Dark Thirty. Accused in some quarters of defending the C.I.A.'s use of torture in its decade-long hunt for Osama Bin Laden, Zero Dark Thirty was really more of a high-tone Rorshach blot for each viewer's opinion of the endless War on Terror. Bigelow has always gone for immersion before reflection or judgment.

"I don't think it's up to the filmmaker to judge," the director told Washington Post chief film critic Ann Hornaday in a profile published last week. And it's not as though she's only just become interested in identity politics or policing: Long before her metamorphosis into an Oscar-winning maker of Important Films, she made 1990's Blue Steel, a sordid thriller that starred Jamie Lee Curtis as a rookie patrol officer who comes under suspicion after she kills a robbery suspect whose weapon can't be found. It's not a particularly good movie, nor one that would remotely satisfy any 2017 test of its wokeness, but it is at least more evidence that Bigelow was thinking about the problems of policing even when she was just making pulp films.

Bigelow's quasi-journalistic style has long alienated some viewers; now it's infuriating them, too. Chicago critic Angelica Jade Bastien slammed Detroit as "soulless," claiming it isn't harsh enough in its condemnation of the misconduct it depicts so mercilessly. Some of her specific complaints about Boal's screenplay — that it makes Melvin Dismukes "too passive a character," or that "there are also brief, disconcerting moments that present some white cops in a great light" — come from the moments where Boal hews closest to the firsthand accounts Dismukes and Reed shared with him. Dismukes says he did all he could to prevent the bloodshed, which wasn't much, and Reed says that after he fled the Algiers he was picked up and taken to the hospital by a cop—one who wasn't involved in the nightmare at the hotel. Molding facts into the emotional construct we refer to when use the word story is messy work, even when it's done in good faith.

I've seen Detroit only once, but I'm of the option that Bigelow and Boal have done that good but messy work, resulting in a movie that is maddeningly imperfect but still honorable. The movie opens with a semi-animated sequence that fashions Jacob Lawrence's "Migration Series" of paintings into a primer on the mass movement of African-Americans from the rural south to the urban north and west after World War I, and the subsequent white flight to the suburbs. That meant that by the 1960s, Detroit was a majority-black city with a majority-white police force.

It's to Bigelow's credit that she doesn't survey the worlds in which she sets her movies in schematic screenwriting terms: Detroit's early scenes, wherein a police raid on an unlicensed nightclub that's hosting a party for returning veterans sparks a riot, includes a few left turns — one of the black party guests who mouths off to the "pigs" turns out to be a narc, for example. This detail serves no narrative purpose; it only serves to underscore the absence of trust between the police and the citizens they're sworn to protect and serve. Editor Billy Goldenberg splices in documentary footage with the newly-shot material in this section of the movie, creating a panorama of the climate of mortal fear and volcanic anger between the citizens and the police.

We begin to get our bearings when Reed (Algee Smith) and The Dramatics prepare to perform on a revue at the Fox Theatre where they know a Motown A&R scout will be in the audience. When the police order the performance stopped and the Fox evacuated, and then their bus home is set upon by rioters, Reed and his friend Fred Temple (Jacob Latimore) make the ill-fated decision to wait out the curfew poolside at the Algiers.

The police occupation of the Algiers forms the film's harrowing, quite long centerpiece. Bigelow uses all her gifts as a communicator of visceral sensation to summon the horror of spending a night under these vicious cops' bootheels. It's nauseating. By the time Anthony Mackie — playing an out-of-work Vietnam vet who gets thanked for his service by being beaten and spat on by cops — agrees never to speak of what he's witnessed, Bigelow and Boal have said all they have to say.

But Detroit continues on to depict the trial of the three officers, leaking tension as it does. If the intent of this section of the film is to illustrate that these cops are not bad apples but rather the functioning-as-designed armature of an inherently racist justice system, it's only partially successful. The tactics their lawyer (John Krasinski, weirdly) uses to discredit the prosecution's witnesses are as familiar as the Algiers scenes are revolting, and our rage circuits have already blown.

Maybe it's just impossible for even a scene-setter as skilled as Bigelow to do anything new in a courtroom. The coda she chooses, showing Larry Reed's resolution to continue his musical career in a far more modest fashion than before, has nothing to do with consoling the audience after 135 minutes of trauma. It's about Reed becoming a militant for peace. It's about him making a choice to survive. If nothing else, Detroit gets you thinking about how those might be the same thing.