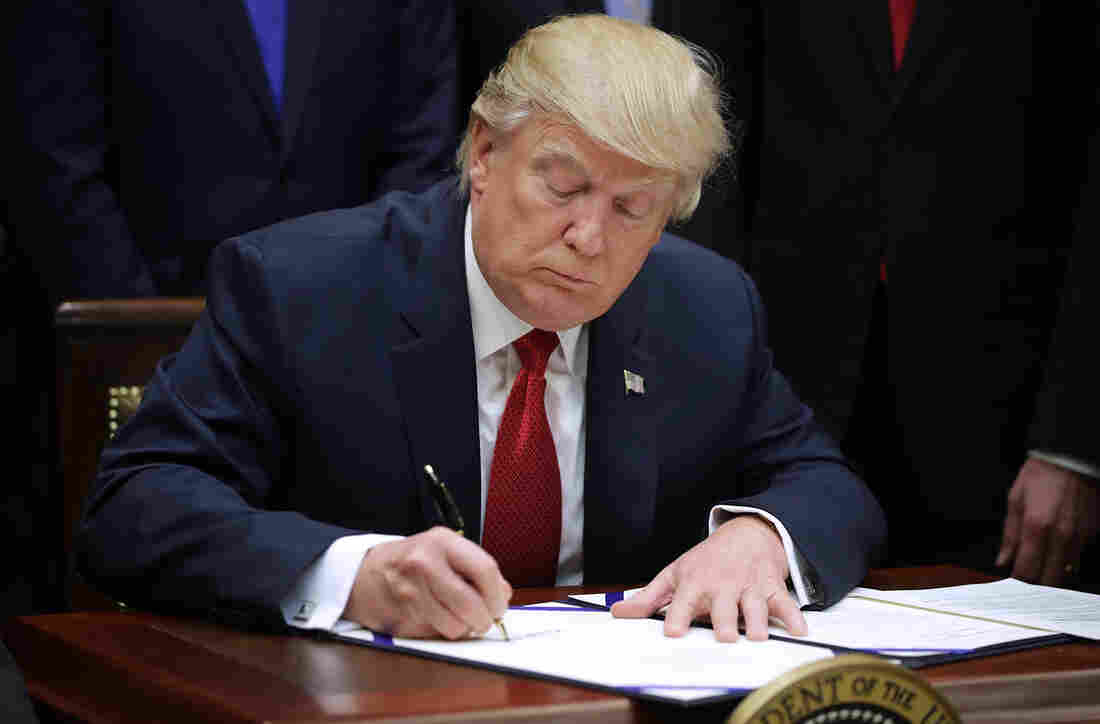 President Trump signs the Veterans Choice Program Extension and Improvement Act at the White House in April. When they sign legislation, presidents can issue a "signing statement" to share their legal interpretation of the new law. Trump did so with the Russia sanctions law. Chip Somodevilla/Getty Images hide caption 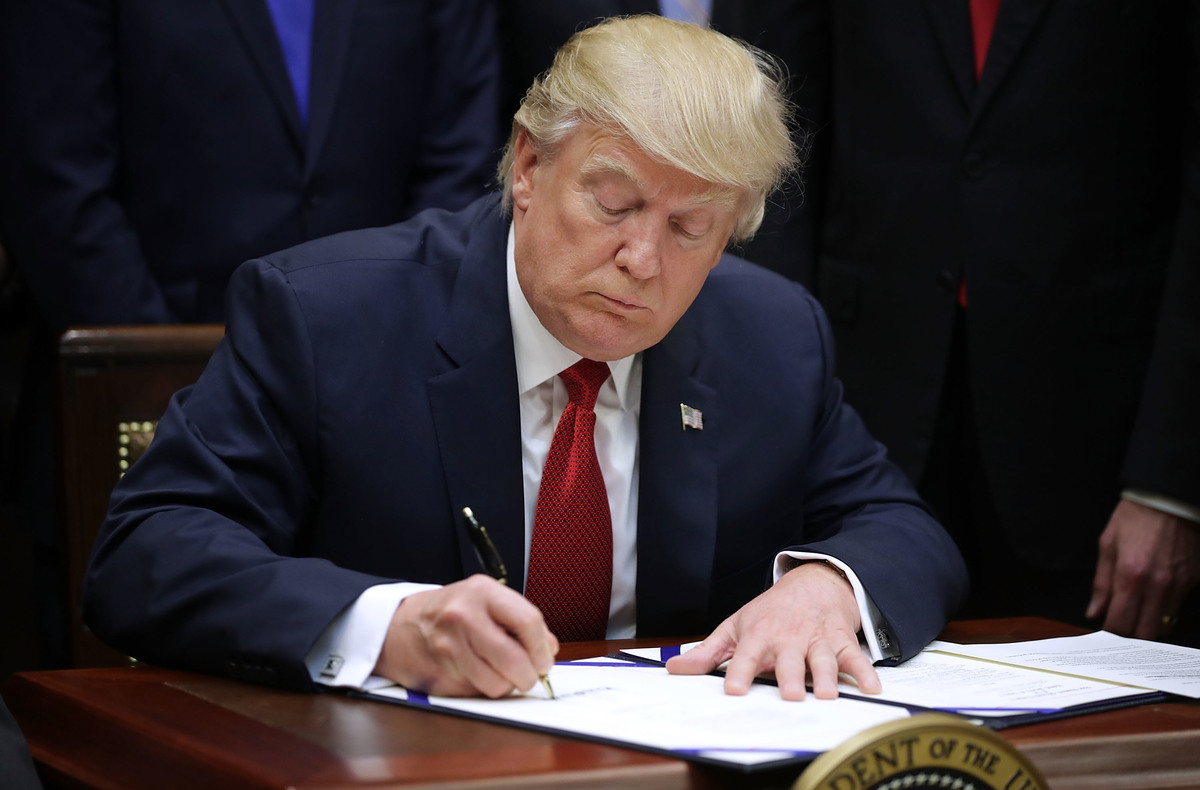 President Trump signs the Veterans Choice Program Extension and Improvement Act at the White House in April. When they sign legislation, presidents can issue a "signing statement" to share their legal interpretation of the new law. Trump did so with the Russia sanctions law.

President Trump signed a bill Wednesday imposing new sanctions on Russia, Iran and North Korea, but he made it clear that he was not happy about it.

The president released a scathing signing statement that said the bill was hastily assembled and included "a number of clearly unconstitutional provisions."

"While I favor tough measures to punish and deter aggressive and destabilizing behavior by Iran, North Korea, and Russia," Trump wrote in the signing statement, "this legislation is significantly flawed."

Though that language may strike some as harsh, legal and political experts say it isn't uncommon or out of line with what presidents in recent history have done when it comes to commenting on legislation they are signing into law. The practice is called a "signing statement."

"It's clear that this president intends to make use of this particular device that was popular in the George W. Bush administration, was used by President Obama, but not as much. And it's quite clear that Mr. Trump's going to use it," said Phillip Cooper, a professor of public administration at Portland State University and the author of a book about presidential executive action.

Bush used signing statements to challenge about 1,200 provisions of 172 laws he signed, more than double the amount of all his predecessors combined, according to The Washington Post. While Obama didn't challenge the same quantity of laws, he used his signing statements in much the same way, effectively giving the executive branch the last word on how a bill should be legally interpreted.

Collins said this was Trump's second significant signing statement. The first was on a government funding bill signed in May.

The statement is an indication of disagreement with Congress but isn't necessarily an indication the president is looking for a fight with the legislative branch or won't comply with the new law. A legislative aide told NPR that the signing statement "might have a lot of bluster" but that there is nothing in it "that would appear to inhibit the execution and implementation of this legislation."

Pence Talks Up NATO On Visit To Russia's Front Yard

"He's drawing lines, and he's making some pretty significant statements about the scope of his executive power in foreign affairs," said Cooper.

The combative statement was one of Trump's only realistic options because he didn't have much of an alternative to signing the sanctions bill. The legislation passed both chambers of Congress with overwhelming, bipartisan and, most importantly, veto-proof majorities.

Lawmakers from both sides of the aisle put out statements pushing back on the president's pushback.

"It is critical that the President comply with the letter and spirit of this legislation and fully implement all of its provisions," said Sen. John McCain, R-Ariz. "Going forward, I hope the President will be as vocal about Russia's aggressive behavior as he was about his concerns with this legislation."

House Minority Leader Nancy Pelosi said, "President Trump's signing statement raises serious questions about whether his Administration intends to follow the law, or whether he will continue to enable and reward Vladimir Putin's aggression."

The president was particularly unhappy with language in Wednesday's bill that limited his executive power.

Normally, Congress leaves presidents full latitude to waive sanctions if it's in the best interest of the U.S. This bill specifically takes that ability away from Trump and future presidents when it comes to Russia.

If he wants to lift or modify sanctions on Russia, the president has to send Congress a report explaining and justifying his decision, and lawmakers would then be able to block the move. Depending on a number of factors, legislators would have between 30 days and nearly three months to pass a resolution of disapproval. The scope of the congressional review, without a sunset and affecting any and all sanctions relief for Russia, is unprecedented.

Still, in his signing statement, despite the strong talk of "unconstitutional provisions," Trump said he intends to adhere to the review process.

Donald Wolfensberger, a congressional fellow with the Woodrow Wilson Center, said Trump's statement, despite its bluster, was fairly "boilerplate."

"The problem is not in the signing statements. The president can say anything he wants," Wolfensberger said. "It's if he defies the law, and that is challenged in some way.

"That's where the rubber meets the road."