Accessibility links
This Pilot Is Headed To Space With Or Without NASA In 1961, Wally Funk trained to be an astronaut. But she never got to go to space. Fifty years on, she still dreams of flying among the stars. 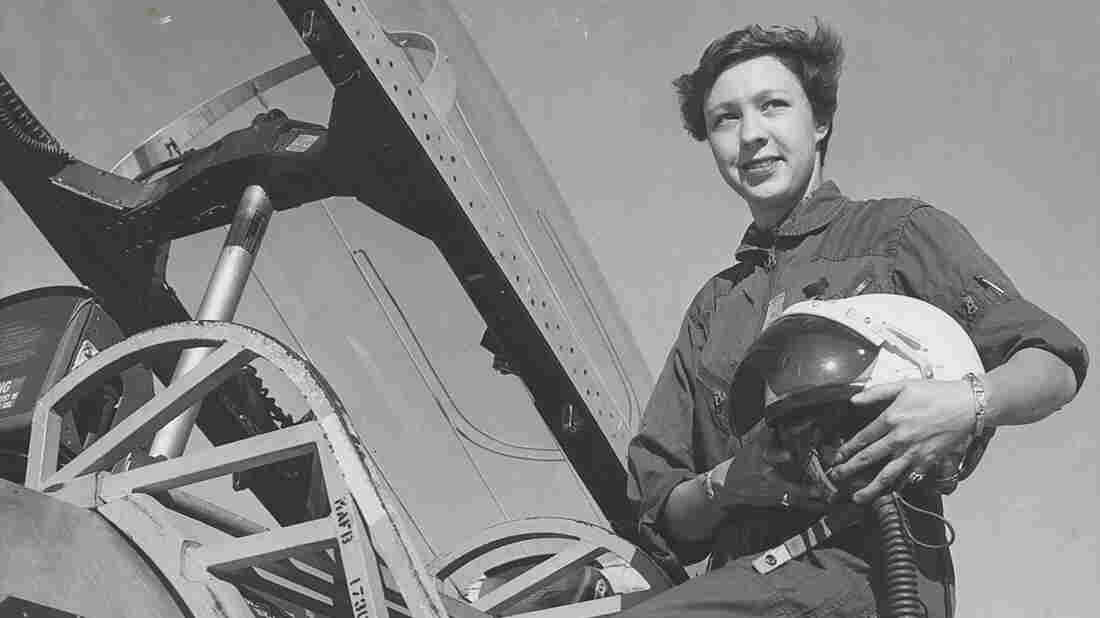 Wally Funk is one of the Mercury 13, a group of women who trained to be astronauts in the early 1960s. Courtesy of Wally Funk hide caption 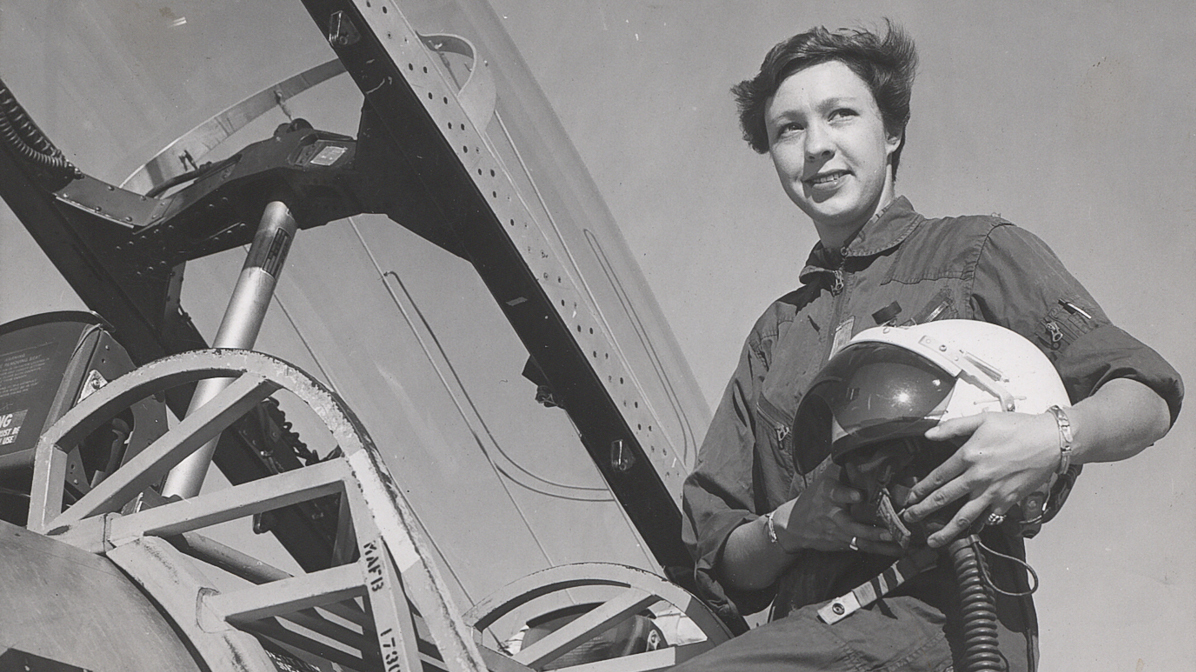 Wally Funk is one of the Mercury 13, a group of women who trained to be astronauts in the early 1960s.

Wally Funk has spent her life in pursuit of a dream. The pilot, flight instructor and almost-astronaut longs to go to outer space.

In 1961, she was part of a group of female pilots who took part in tests to determine whether women were fit for space travel. The project was run by the same doctor who developed tests for NASA astronauts and the women became known as the Mercury 13.

"I get a call said, 'Do you want to be an astronaut?' I said, 'Oh my gosh, yes!' And he said, 'Be here on Monday to take these tests,' " the 78-year-old Funk recounted to her friend and flight student, Mary Holsenbeck, during a recent visit to StoryCorps in Dallas. 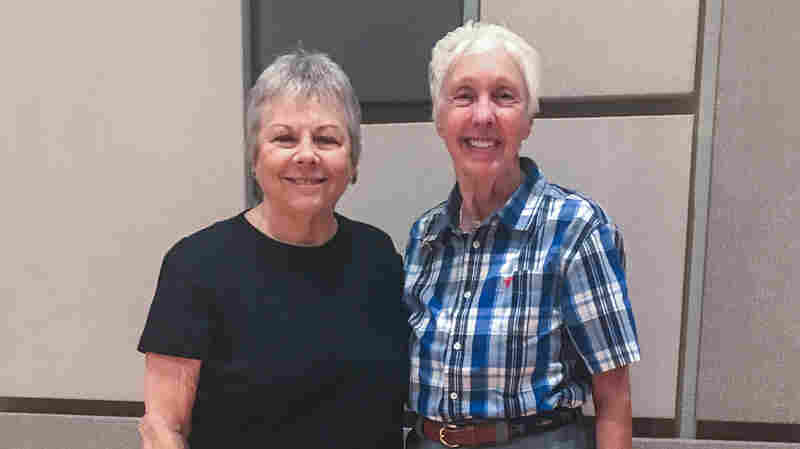 Mary Holsenbeck (left) and Wally Funk at StoryCorps in Dallas. The two friends talk every day at 10 p.m. and often take to the skies together. StoryCorps hide caption 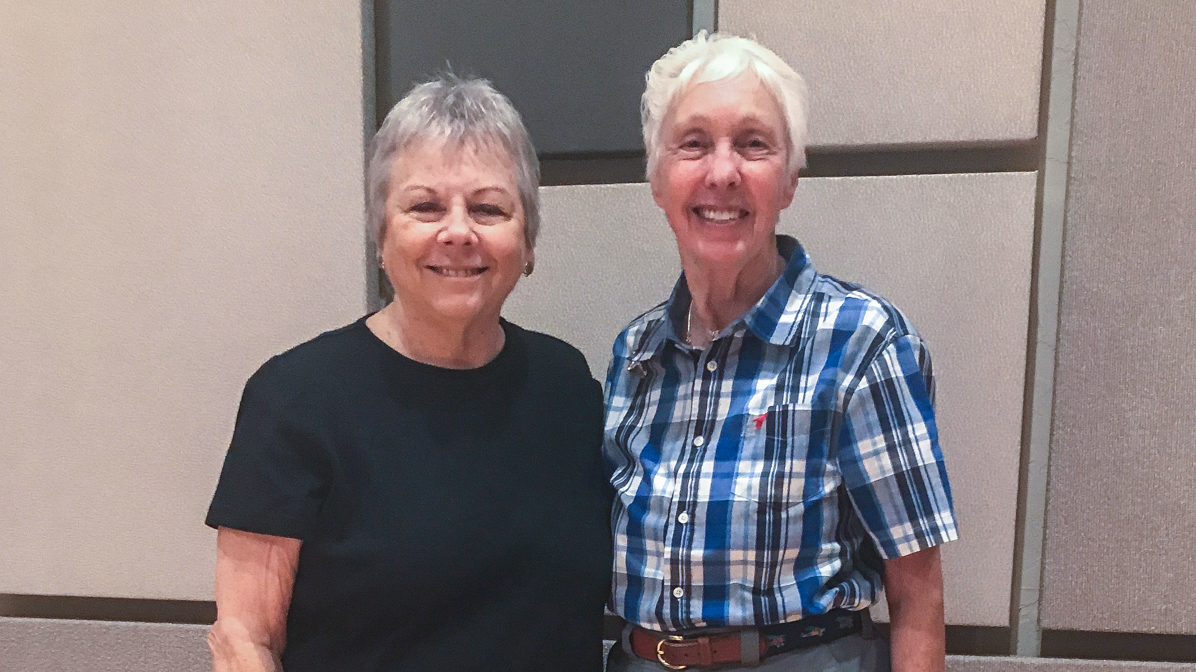 Mary Holsenbeck (left) and Wally Funk at StoryCorps in Dallas. The two friends talk every day at 10 p.m. and often take to the skies together.

"I had needles stuck on every part of my body. Tubes running up my bottom. So I went along with it. It didn't bother me," she said. "And then they said, 'We want you to come with a swimsuit; you're going to go into the isolation tank.' Well, I didn't know what that was. The lights come down, they said try not to move. Well, I didn't have a whole lot to think about. I'm 20, I had $10 in my pocket. And then finally they said: 'Wally, you were outstanding. You stayed in 10 hours and 35 minutes. You did the best of the guys that we've had and of the girls.' "

Funk was preparing to go to Florida for more testing when she found out the program had been shut down. So, though they passed many of the same tests as the men, Funk and the other Mercury 13 women never got to go to space.

"When we got the telegram, that was it, and I never heard anything more," she explained. "So I went on about my own business. I'm not going to sit back and pine over anything."

No, Funk didn't pine. Instead, she applied to NASA four times but got turned down because she didn't have an engineering degree. But Funk hasn't given up on going to space.

"I never let anything stop me," she said. "I know that my body and my mind can take anything that any space outfit wants to give me — high altitude chamber test, which is fine ... centrifuge test, which I know I can do five and six G's. These things are ... easy for me." 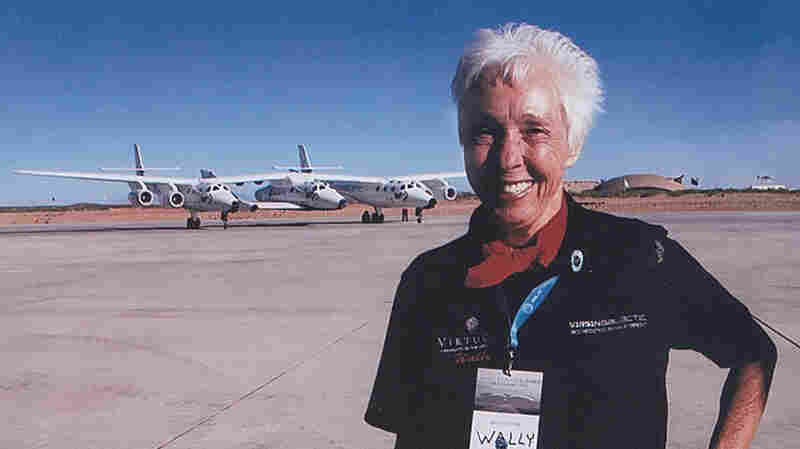 Wally Funk poses in front of the Virgin Galactic spacecraft in 2015 in the Mojave Desert. Funk has a ticket and hopes to be on its first flight into space. Courtesy of Mary Holsenbeck hide caption 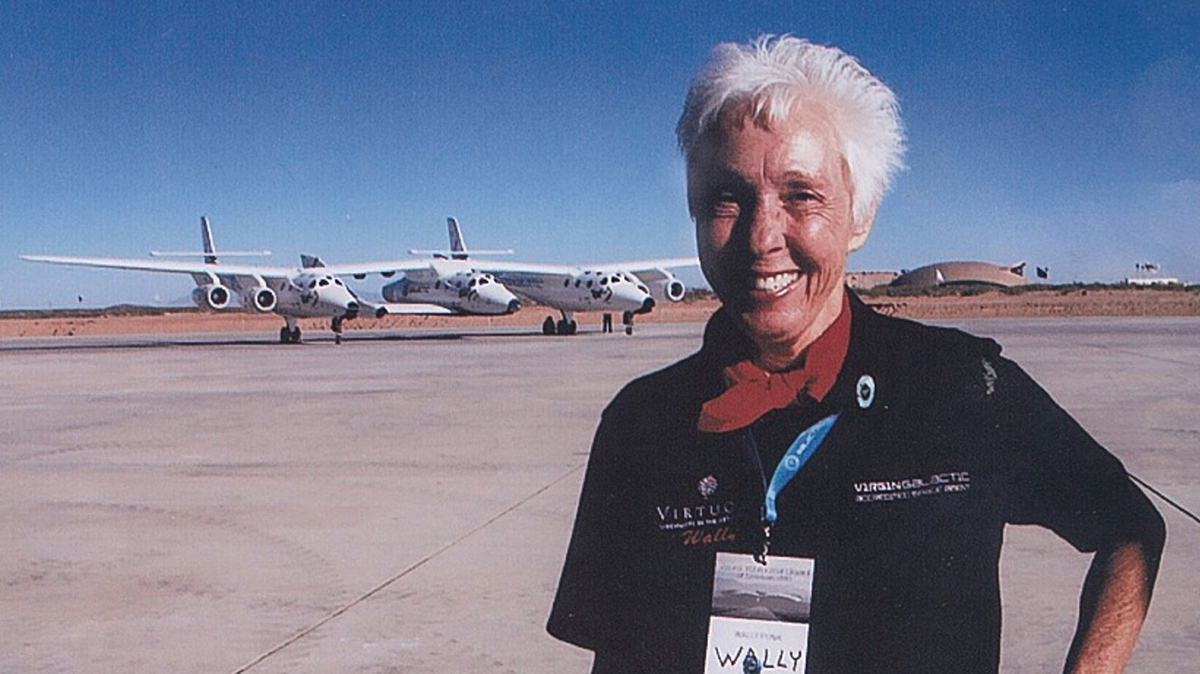 Wally Funk poses in front of the Virgin Galactic spacecraft in 2015 in the Mojave Desert. Funk has a ticket and hopes to be on its first flight into space.

Funk bought a ticket for Richard Branson's Virgin Galactic commercial spaceship and hopes to be on board its maiden voyage into space. Holsenbeck plans to be there, cheering Funk on when she finally blasts off.

"You are probably the most fearless person I've ever known in my life," she told Funk, adding that the aspiring astronaut was not just her hero, but also her mentor.

"I went through a very nasty divorce and you made a phone call at the right time one afternoon that saved my life," Holsenbeck said. "You said, 'Mary, let's go flying and I said, 'Wally, I can't afford to go flying.' And you said, 'I didn't ask you that — meet me at the airport.'

"And taking me flying, you would pick out a cloud and you would say 'Mary, you see that cloud up there?' I'd say 'Yes, ma'am.' You said, 'Point the nose of this airplane toward that cloud and just fly to it.' And it was the most freeing feeling. I felt like I was in charge of something when I was in that airplane, and that helped me to put myself back in charge of my own life," Holsenbeck continued. "So yeah, you fix the problem." 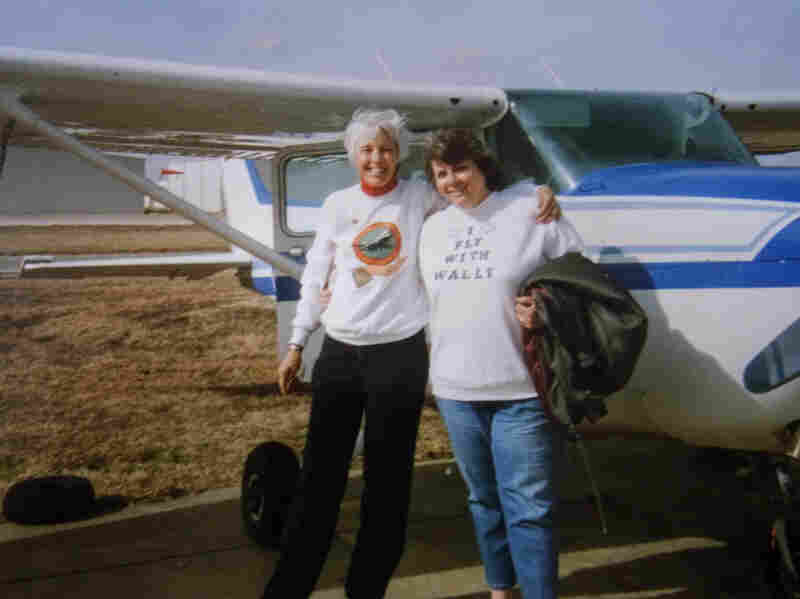 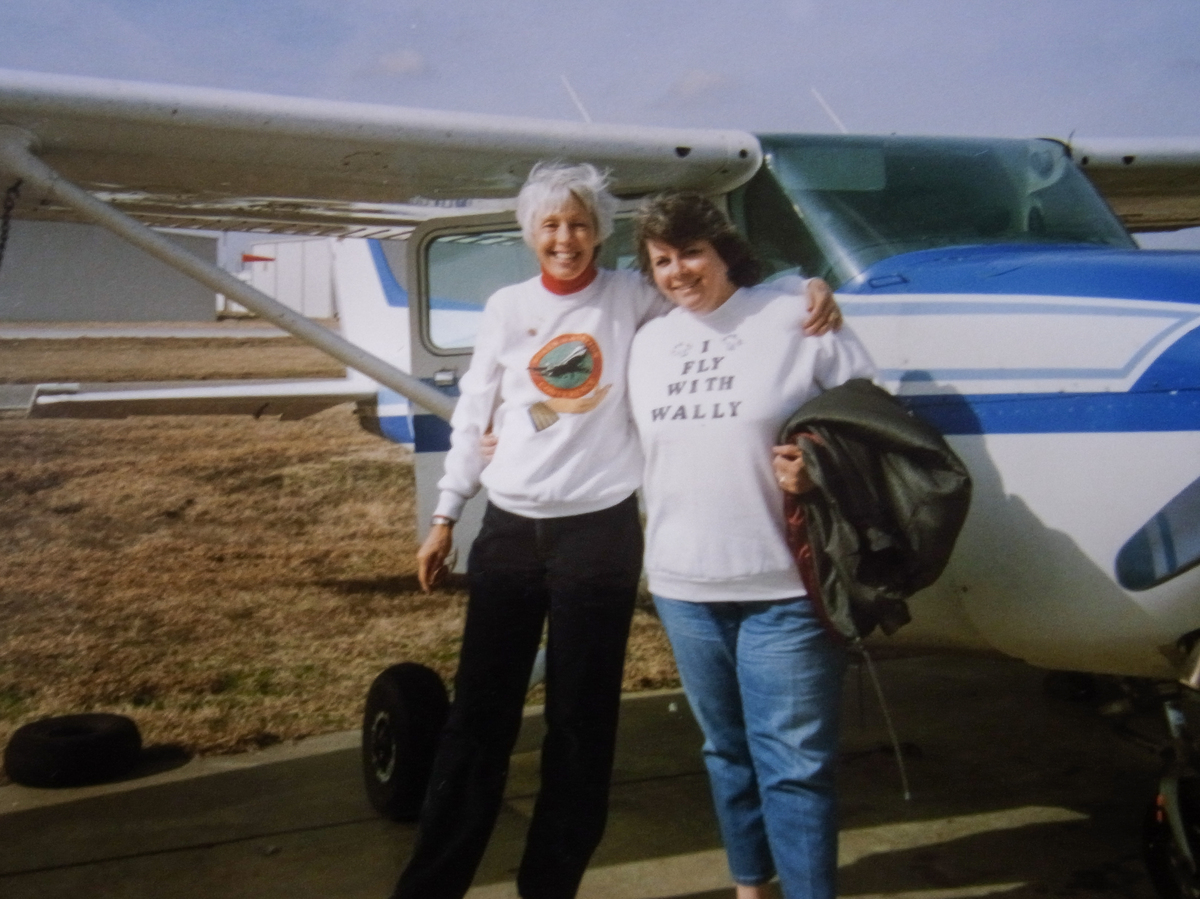 Wally Funk and Mary Holsenbeck in 1993.

The two women talk every day at 10 p.m., recounting their days. They call it their 10 o'clock flight.

"So we go up into the clouds together because Wally, you've always told me, 'When you have problems? Go to the clouds.' "