Accessibility links
Could A Bus With Sleep Pods Replace Airplanes? A new startup wants to revolutionize how we travel long distances using pretty simple technology: a bus with beds. Only, they're called pods. 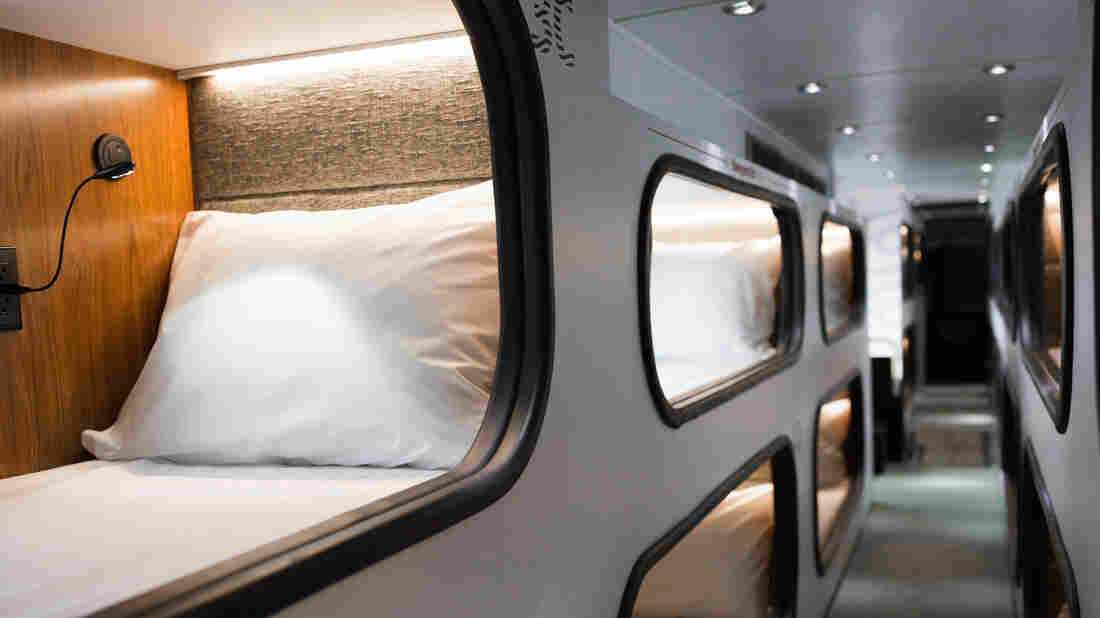 Cabin is a bus with pods for sleeping. It currently offers service between Los Angeles and San Francisco, starting at $115 each way. Cabin Technologies hide caption 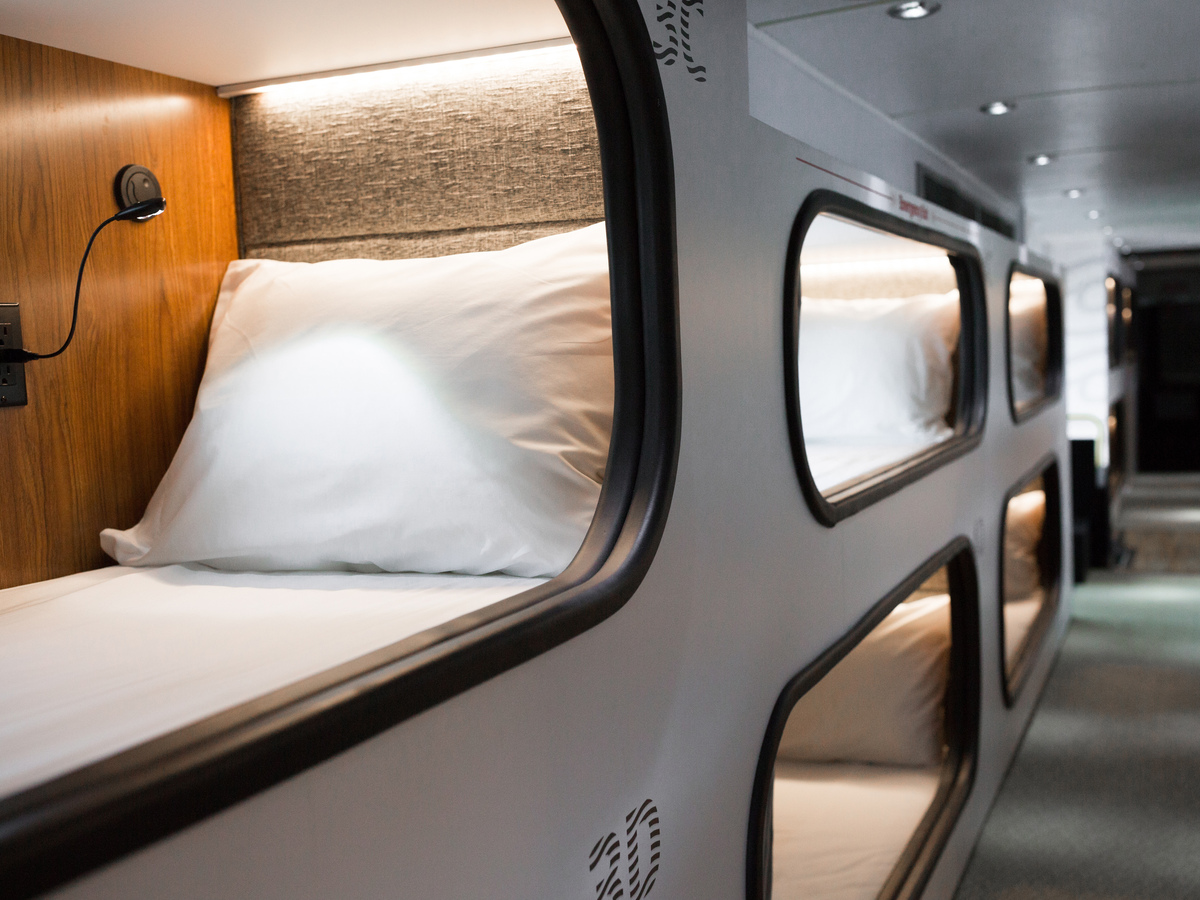 Cabin is a bus with pods for sleeping. It currently offers service between Los Angeles and San Francisco, starting at $115 each way.

If you ever have to travel a long distance — say, Washington, D.C., to Atlanta, Detroit to Chicago, San Francisco to Los Angeles — you might be stuck with only bad options: a flight from an airport with chronic delays that's hard to get to, or an Amtrak train ride that costs three times as much as a flight.

Well, now there's a new option on the horizon: a double-decker bus with pods for sleeping. It's called, simply, Cabin. It's an overnight service — like a red-eye — designed for people who love going places, but hate being in transit.

Last weekend, I gave it a try. My goal was to spend all day Sunday enjoying beautiful, warm, sunny Southern California, then get to work in Northern California by 8 a.m. Monday — feeling well-rested, not a train wreck. 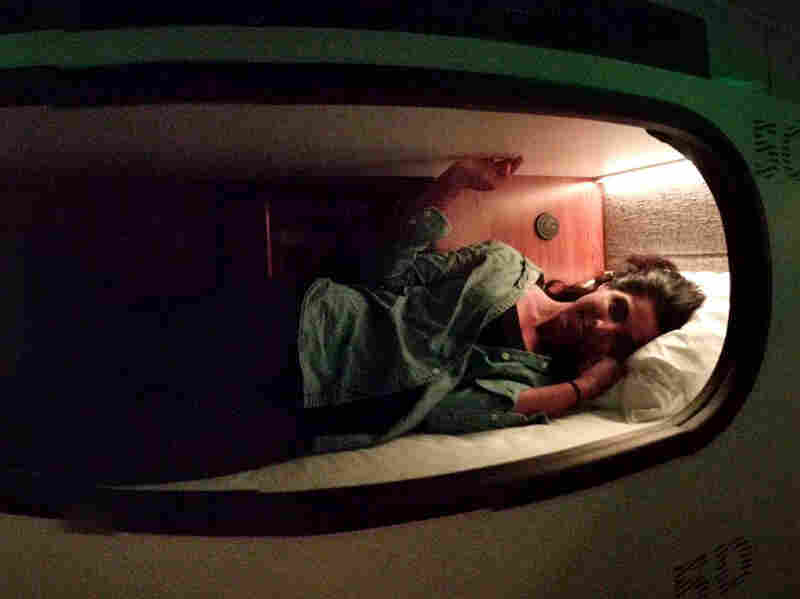 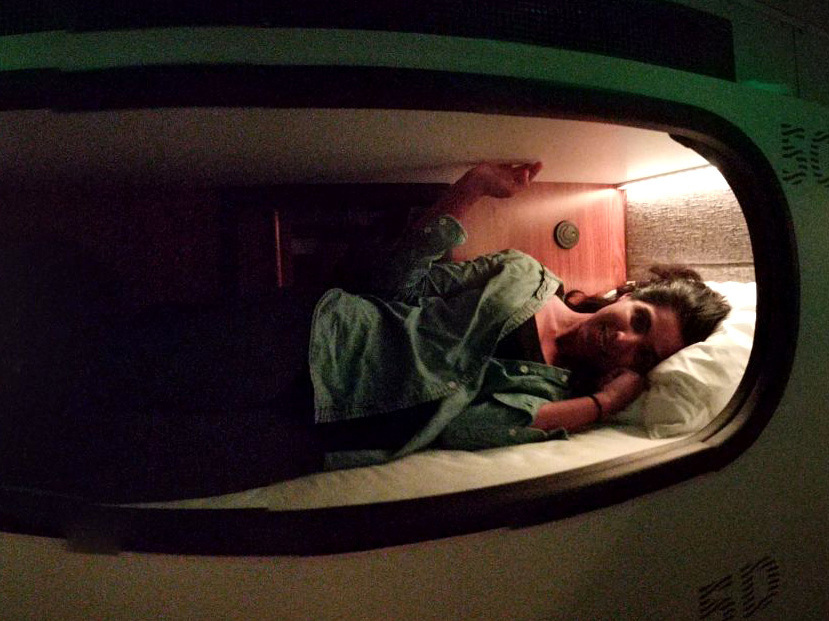 NPR's Aarti Shahani tries one of the sleeping pods aboard a Cabin bus traveling from Santa Monica, Calif., to San Francisco.

Part one went smoothly: I had a bike ride along the beach with a buddy, a hearty Persian dinner, and even caught that new movie Dunkirk (not for the faint of heart).

Part 2 starts at 11 p.m., when I board my Cabin in Santa Monica. The ground floor has table seating, kind of like the dining car in a train. The upper level, however, is like nothing I've ever seen before. On each side of the walkway, there are beds — several across, and stacked in two like bunk beds, only built into the bus.

They're called pods, and crawling into one is jarring. It's not high enough to sit up in, so you have to crawl. And once inside, it feels like being in a cabinet or a coffin (you pick). I inch my way into a top pod, trying not to make noise because a mother and her little girl are sharing the pod below me. Note: Only petite people can share.

This isn't the first bus in the world to offer sleeping quarters. But Cabin is hipster, not hippie. Instead of a dirty mattress tossed on the floor (with beer stains and God knows what else), you get a firm solo mattress, a hypoallergenic comforter and a thick gray curtain you can draw for privacy.

While the dim lights are still on, I crawl back out to talk with fellow Cabineers. I'm literally on my knees, whispering, when I meet Jeff Kateman. He's tucked under his blanket — snug as a bug — as he explains why he paid $115 to travel this way. 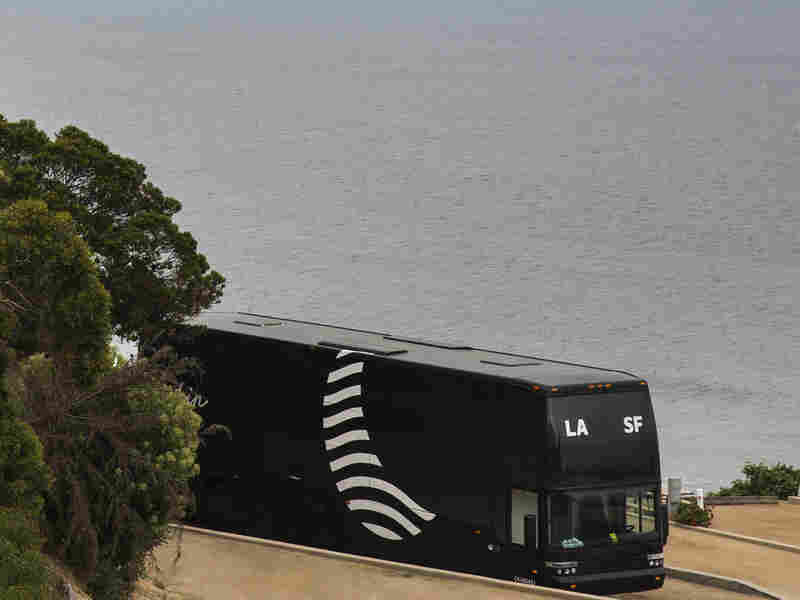 The double-decker Cabin bus is an overnight service that promises riders they'll be well-rested when they arrive. Cabin Technologies hide caption 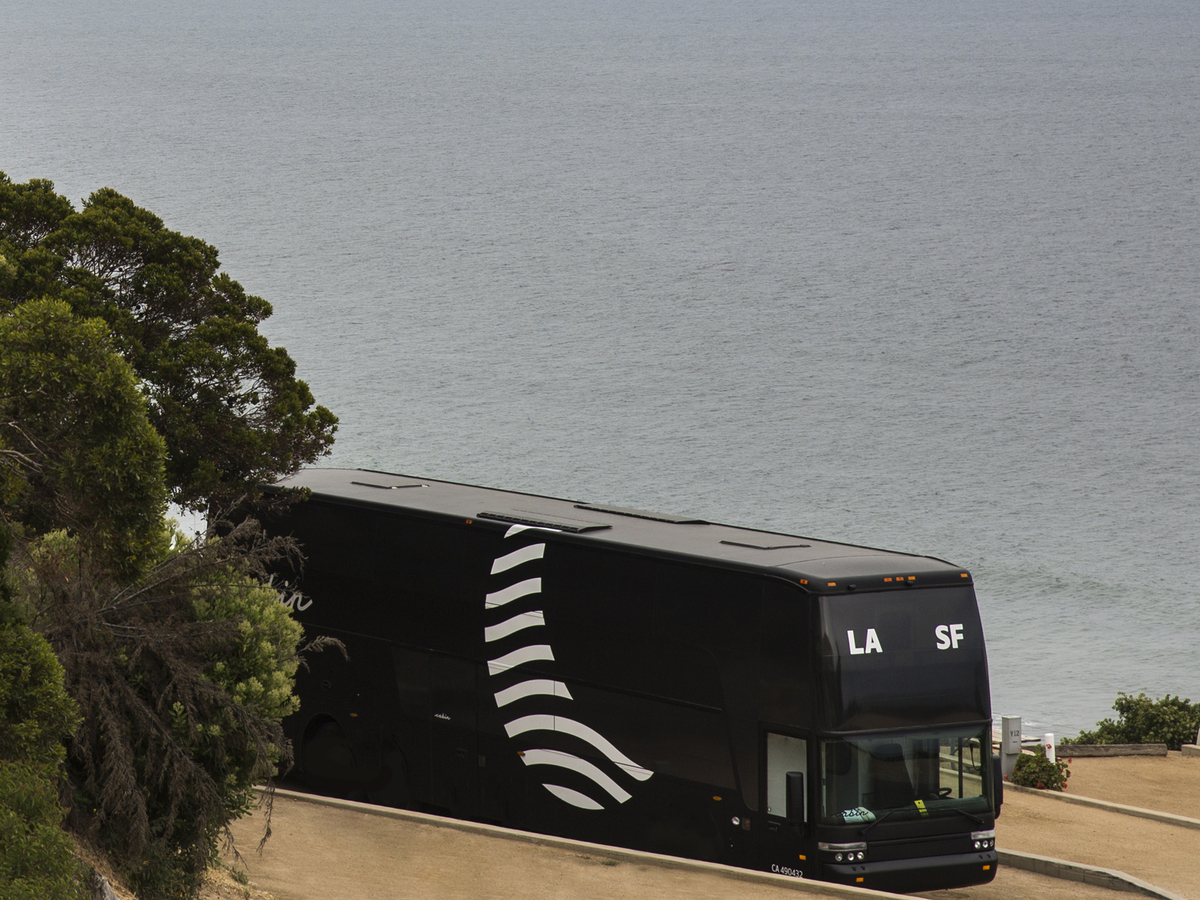 The double-decker Cabin bus is an overnight service that promises riders they'll be well-rested when they arrive.

"I never liked flying into San Francisco, and if I can avoid flying, I avoid flying," says Kateman, a lawyer who does mergers and acquisitions. "This just seemed better than driving. Someone else is driving for you."

This is what Silicon Valley is betting on: that people don't want to drive. Autonomous cars and the much-hyped (and nonexistent) hyperloop are on the sexier end of the tech industry's efforts to disrupt transportation. This new bus startup is on the practical end — aspiring to be the Uber or Lyft of long trips. (So far they're just offering service between Los Angeles and San Francisco.)

Kateman could get used to traveling this way. He's about 6 feet tall, "but there's more than enough room," he says. "It's actually very comfortable."

Back in my pod, I draw the curtain and listen to the announcement, which sounds more like what you'd hear at a spa — not on a bus.

"There's life water to keep you hydrated," says the attendant says in a calm, slow cadence. "Additionally there's a shoe bag, so your shoes can sleep as well."

Well, my shoes and I both sleep very well. When we pull into a parking lot in San Francisco, I realize I've been out 7.5 hours (way more than usual).

I pack up, take off and make it to work early.

You may be wondering how I slept for so long, since LA to San Francisco is only a six-hour drive. Well, to guarantee a full night's rest, the creators of Cabin turned it into eight hours — by driving slower and using back roads.