Accessibility links
In The States, Republicans Have Never Been So Dominant — Or Vulnerable West Virginia's governor just announced he's switching parties and joining the GOP. Although the GOP dominates in the states, a constellation of forces could challenge Republicans this year and next.

When West Virginia Gov. Jim Justice stood next to President Trump during a campaign rally in Huntington, W.Va., on Thursday to announce that he was switching parties and becoming a Republican, it was a historic moment for the GOP.

Justice's decision gives Republicans control of 34 governorships — tying a record set nearly a century ago. Democrats hold just 15 governorships. (Alaska's governor is an independent). Republicans now hold so-called trifectas — control of a governor's mansion and both chambers of a state legislature — in 26 states (including Nebraska's non-partisan unicameral legislature which is effectively controlled by Republicans). Democrats have just six such trifectas. That's in addition to Republicans' complete control of the federal government.

And unlike their D.C. cousins, Republicans in statehouses across the country can point to conservative policy accomplishments this year, such as adding new restrictions on abortion, expanding gun rights, weakening private and public sector labor unions and expanding school voucher programs.

But a constellation of forces means that this level of Republican dominance in the states is brittle and in danger of shattering.

Perhaps the biggest reason Republicans are vulnerable is because of the extent of their past successes at the state level. Republicans are defending 27 of the 38 governors' seats that are up election between now and November 2018. And 14 of those 27 seats will be vacant — including large, important states such as Florida, Michigan and Ohio — mostly due to term limits.

While it's too early to tell how many races will be truly competitive, it's likely Republicans will face plenty of headwinds. State-level elections have become increasingly nationalized over the past two decades and the president's popularity can have a major impact on voter enthusiasm and turnout — especially a challenge with a president as polarizing and unpopular as President Trump currently is.

Years in power have also created problems for state-level Republicans. In Kansas, an overly ambitious plan to cut taxes orchestrated by Gov. Sam Brownback (who's been nominated to a State Department post in the Trump administration) starved the state of funds for its schools and other services. Kansas Republicans wound up bitterly divided over the issue and earlier this year, a moderate faction sided with Democrats to override Brownback's veto and rescind the tax cuts.

Similarly, a series of tax cuts in oil-dependent Oklahoma left the state poorly prepared for a downturn in energy prices. Republican lawmakers were forced to swallow their opposition and vote for tax hikes in order to keep the state solvent.

With Democrats all but vanquished in several Republican-dominated states, intra-Republican disputes have taken center stage. In Texas, Republicans are divided between a business-friendly faction that prioritizes low taxes and less regulation and social conservatives eager to pass the most conservative legislation possible, such as a bill limiting transgender access to bathrooms. Earlier this year, Florida Gov. Rick Scott was running campaign-style ads against fellow Republicans in the legislature over a dispute about economic development funds.

A combination of voters unhappy with the governing party's track record and internal party rifts that will play out in primary elections, sometimes leading to extreme or unqualified candidates, could weigh down Republican candidates up and down the ballot over the next year. 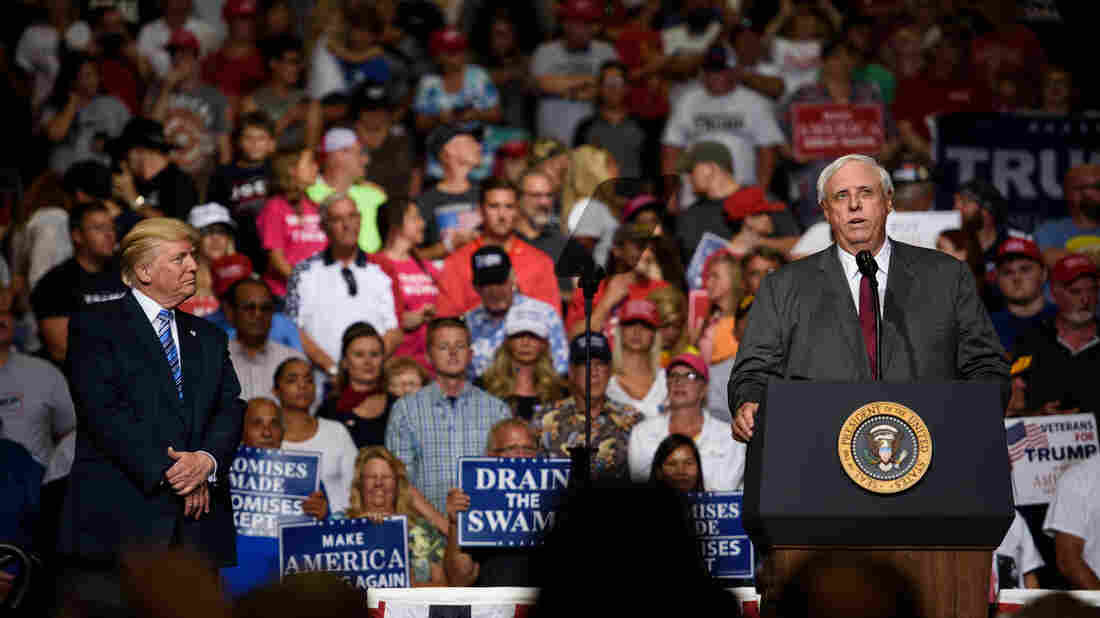 West Virginia Gov. Jim Justice announces that he is switching parties to become a Republican as President Trump listens on at a campaign rally Thursday in Huntington, W.Va. Justin Merriman/Getty Images hide caption 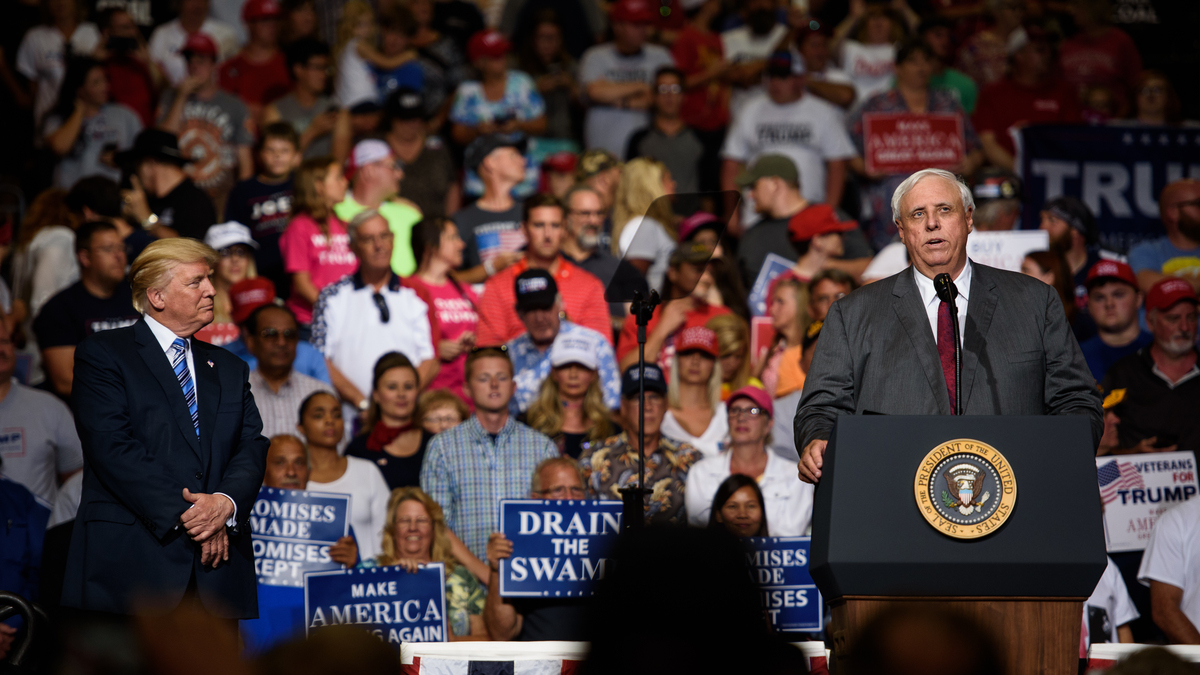 West Virginia Gov. Jim Justice announces that he is switching parties to become a Republican as President Trump listens on at a campaign rally Thursday in Huntington, W.Va.

The maps and the courts

After the Republican wave election in 2010, victorious GOP state lawmakers took advantage of that year's decennial redistricting to further entrench their power, especially in swing states such as Wisconsin and North Carolina.

Republican-drawn legislative and congressional district maps in North Carolina, Texas, Virginia, Georgia and Alabama are already in federal court because of concerns about racial gerrymandering and North Carolina has already been ordered to redraw some of its districts.

But an even greater existential threat to Republican dominance at the state level comes from one of the most important Supreme Court cases of this fall's docket. Arguments in Gill vs. Whitford could determine whether Republican lawmakers in Wisconsin were allowed to take partisanship into account when drawing legislative boundaries. The Republican maps in Wisconsin were so formidably drawn that the GOP won 60 of 99 seats in the Wisconsin House even as Democrats drew more votes statewide in 2012 and 2014.

While both parties use partisan gerrymandering to their advantage, Republicans' dominance at the state level means the GOP has far more on the line from a Supreme Court decision.

The flip side of Republicans' dominance is the weakness of state-level Democrats. Going into the 2010 midterm elections, Democrats had full control of 17 states compared to Republicans' 10 states. Democrats acknowledge they've let their state parties wither and need to focus on rebuilding.

As former President Barack Obama told NPR's Steve Inskeep after the 2016 election, "you've got a situation where there are not only entire states but also big chunks of states where, if we're not showing up, if we're not in there making an argument, then we're going to lose."

But Democrats have a long way to go. A much touted effort to recruit candidates for this year's Virginia's House of Delegates elections has substantially increased the number of districts Democrats are competing in from 39 in 2015 to 67 today — but that still leaves 33 districts where the party was unable to find a candidate to run.

Still, while Democrats haven't won any of the special U.S. House elections so far this year, they've significantly improved their margins even in deeply Republican districts — suggesting that Democratic voters are highly motivated.

More evidence of enthusiasm comes from the latest Quinnipiac poll that has 52 percent of voters saying they prefer that Democrats control Congress compared to 38 percent for Republicans. Given the GOP edge in congressional and state legislative districts, Democrats will probably need popular sentiment to sway far in their favor if they are to have a hope of regaining power.

It's still 15 months until Election Day 2018 and plenty can still happen. But based on the landscape, it's hard to see how Republicans can maintain their current level of dominance.