Accessibility links
'Happiness' Explores The Complex Push And Pull Of Human Relationships Heather Harpham's memoir centers on her baby daughter's struggle with a dangerous illness — but broadens out to include her family and her own fraught relationship with the baby's reluctant father.

'Happiness' Explores The Complex Push And Pull Of Human Relationships

'Happiness' Explores The Complex Push And Pull Of Human Relationships 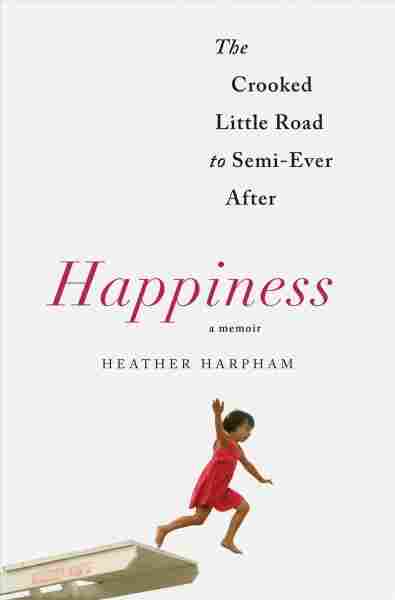 The Crooked Little Road to Semi-Ever After

Nina Martyris is a literature-focused freelancer. Her writing has appeared in NewYorker.com, The Paris Review Daily, The Guardian, NPR and elsewhere.

Sixteen years ago, life seemed perfect for drama teacher Heather Harpham when she fell in love with Brian Morton, an award-winning novelist equipped with a "sly, sly humor." Sure, they were a study in opposites — he was a disciplined, "diffident, sexy, Jewish intellectual," she a California free spirit; he ate broccoli with brown rice and garlic sauce for dinner every night, she strayed toward salty snacks and ice cream; her apartment had big, colorful posters, his had black-and-white postcards. But they were young, in love, and living in New York, and these differences only proved to be thrillingly attractive.

One difference, though, was insuperable: She wanted kids, he didn't. Neither made any secret of where they stood on the issue.

When Harpham learned she was pregnant, they broke up, and she went back to her mother's studio in California to have the baby. Lonely and furious, she was nevertheless determined to bring up her child "one-handed." Hours after the birth of her daughter, however, came a devastating diagnosis: The baby's bone marrow couldn't make red blood cells. She would require an immediate blood transfusion and frequent ones thereafter — four in the first three months as it turned out — to stay alive.

In her new memoir, Happiness: The Crooked Little Road to Semi-Ever After, Harpham relives the heartbreak, hope, and terror she experienced as she watched her infant daughter cross the abyss of a life-threatening disease. Into this tension-torqued story of sickness and health, she works in the fraught tale of her own evolving relationship with Morton, loading the memoir with an added intensity.

A heartfelt exploration of mortality and life, this memoir also explores the complex pulls and pushes of human relationships, and the deep debt we owe to family, friends, and modern medicine.

Acutely aware that her little girl, Gracie, is a victim of bad blood in more ways than one — bad blood between her parents and her own malfunctioning red blood cells — Harpham is a tight coil of fear and anger. Her mother, stepbrothers, and friends in California form a protective cordon around her and the baby, but their loyalty only serves to throw Morton's absence into high relief. Four months after Gracie's birth, Morton, who has called every night and been worried sick long-distance, asks if he can see his daughter. He arrives, and quite naturally, finds her irresistible.

Harpham is no longer "one-handed," but her anger doesn't dissolve overnight — it's just that saving Gracie becomes the focus of her parents' world. The transfusions stabilize her, but the odds of her living past 30 are not high. There is one solution: A stem-cell transplant from a donor who is a close match. A sibling would be the answer. It would mean having another child. But what are the chances of a sibling being a perfect match? Even if there's a match, what are the chances of the transplant being successful? Failure would be fatal. Should they go ahead? It's an agonizing decision only Gracie's parents can make.

In sharp and vivid prose, Harpham tunnels through the harrowing months ahead filled with hospitals, needles, and ICUs. While the book could have benefitted from some pruning, what keeps the reader reading is the writing. Apart from the long, twee title, Harpham's language is crisp, tersely evocative (the baby freshly conceived inside her is a "grain of rice with a heartbeat"), and most bracingly for a book whose currency is pain, funny. Harpham admires Morton's sly humor, but she, too, has a gift for comedy that glints through at dour moments. It's hard not to smile, albeit with a catch in your throat, when she says her unsmiling newborn, "barely past blob status," looks "alarmingly like Alfred Hitchcock" and emits high-pitched squeaks like "a small wind instrument" — and who, after a few hours out of her mother's womb, begins "to smell less like apples and more like an element, tin or iron."

Iron, of course, is the elixir the baby needs to survive, and Harpham's humor has an aching edge to it. It provides the gritty foil to lighter moments such as the hospital scene when Gracie first sets eyes on Gabriel, whose stem cells, if they turn out to match hers, could save her life. She doesn't know any of this, as she's not even two. Asked what she thinks of her brother, she peers into his face, strokes his hand, and announces: "Soft boy."

"My mom cried," writes Harpham. "Brian cried. I cried. Gabriel slept. Gracie looked at us all with baffled amusement — what were we so worked up about?"

A heartfelt exploration of mortality and life, this memoir also explores the complex pulls and pushes of human relationships, and the deep debt we owe to family, friends, and modern medicine. At heart, it is a sobering mediation on the lasting impermanence of its titular emotion, happiness.