Accessibility links
A Podcast Reopens Old Wounds In 'Are You Sleeping' Kathleen Barber's debut novel is an on-trend mashup of murder, social media and Serial-style true-crime podcasting, but though well paced, it suffers from thin characters and a lack of context.

A Podcast Reopens Old Wounds In 'Are You Sleeping'

A Podcast Reopens Old Wounds In 'Are You Sleeping' 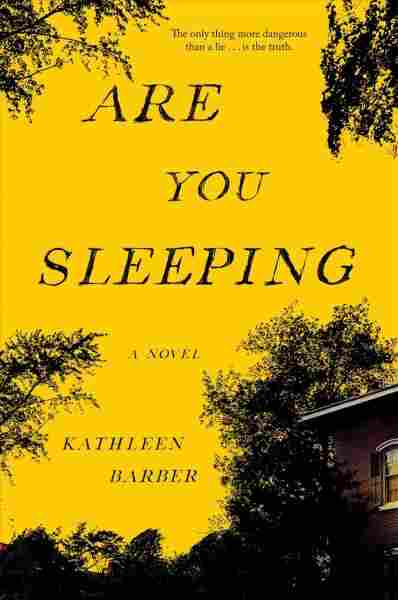 A quandary: There is an absolutely thrilling dilemma baked into Are You Sleeping, a debut thriller from Kathleen Barber. However, not only can I not discuss it without revealing too much — I'm not even sure if it's meant to be a dilemma, or if it's an oversight by the author and her editors. If the former, it could have used more framing; if the latter, someone needs several lashes with a red pencil for overlooking things.

Back to that problem of framing: All of this novel could use more of it. Why has narrator Josie (short for Josephine) Buhrman been out of touch with her family for so long? Yes, we know her father Chuck was supposedly murdered by a local "goth" teen when she and her twin sister Lanie were 15 years old, and that her mother ran off shortly thereafter to join a Californian cult known as the Life Force Collective. But when Josie gets a call from her first cousin Ellen about a new podcast that purports to investigate Chuck Buhrman's death, their easy communication jars with Josie's private view of Ellen and her superficial ways: "She remained exactly as expected: collagen-filled lips pursed, wearing a familiar expression of disdain as she surveyed the unwashed masses." Hasn't the long decade since Josie left Elm Park, Ill., affected her relationships with the people she left behind?

The idea of a podcast based on a previously solved murder is timely, given the popularity of Serial and its ilk, and the idea of a novel about a podcast based on a previously solved murder sounds like publishing gold. "Reconsidered: The Chuck Buhrman Murder" is a podcast hosted by one Poppy Parnell, whose character is treated more superficially than Ellen's Botox: "'Can I quote you on that?' Poppy asked, pulling some equipment from her bag." Anyone who would begin an investigative series like this might, just might, have more expertise than Poppy at appearing sympathetic and engaged. The tension ratchets higher when Josie's mother hangs herself — and everyone wonders if it's because of the podcast.

What the characters lack in depth the book makes up for in pace. Barber cuts in and out of past and present with expert precision.

Yes, I'm straying from the core of the book, which is about Josie and her sister Lanie's relationship — and I'm straying because their characters, like Poppy's, and Ellen's, and all the rest, are one-dimensional. We understand very little about how Josie recovered from losing her boyfriend Adam to Lanie (Adam and Lanie are now married and parents to a seven-year-old daughter; did Josie really not know any of that?), or how a mild-mannered college professor like Chuck Buhrman might have been attracted to a woman like Melanie Cave, the mother of his convicted killer.

What the characters lack in depth the book makes up for in pace. Barber cuts in and out of past and present with expert precision, perhaps evidence of her background as a bankruptcy attorney. Transcribed episodes of the "Reconsidered" podcast, along with Twitter and Reddit commentary from listeners, demonstrate how easily we can all get involved with (interfere with?) the lives of others today. For example, at the funeral-home viewing for Josie's mother, acquaintances tweet out observations about the family. No one is safe from prying eyes.

Except someone who disappears into a cult that prohibits all contact with the outside world (one of the book's rare funny moments happens when a Life Force Collective member named Sister Amamus agrees to meet Josie at a Dairy Queen, and insists that Josie pay for her Blizzard treat before talking). But as Josie's renewed contact with Lanie runs the gamut of emotions from quiet sweetness to deep chaos, a box arrives from the Collective containing their mother's effects, mostly beads and clothing and a few books. It will wind up being a Pandora's Box for sure, but how and for whom?

All will be revealed — or will it? By the time Josie understands her family's sad and complicated story, there's more sadness to come. The twins' mother suffered throughout their childhood from "melancholy" ("She was always fragile," Josie says), and not always able to care for them in a consistent manner. Has her unstable mental health been passed on to her daughters? Which brings me back to that dilemma. If it's deliberate, it's one of the most subtle sleights of hand I've seen in a novel of suspense, and proves that there are some places inside the human mind even social media can't reach.