Accessibility links
Parking Fighter Jets And Tanks, Military Bases Pivot To Avoid Closure The Pentagon is pushing Congress to help it save $2 billion a year by shutting down more bases. Rather than waiting for the ax, military communities are finding ways to stay relevant. 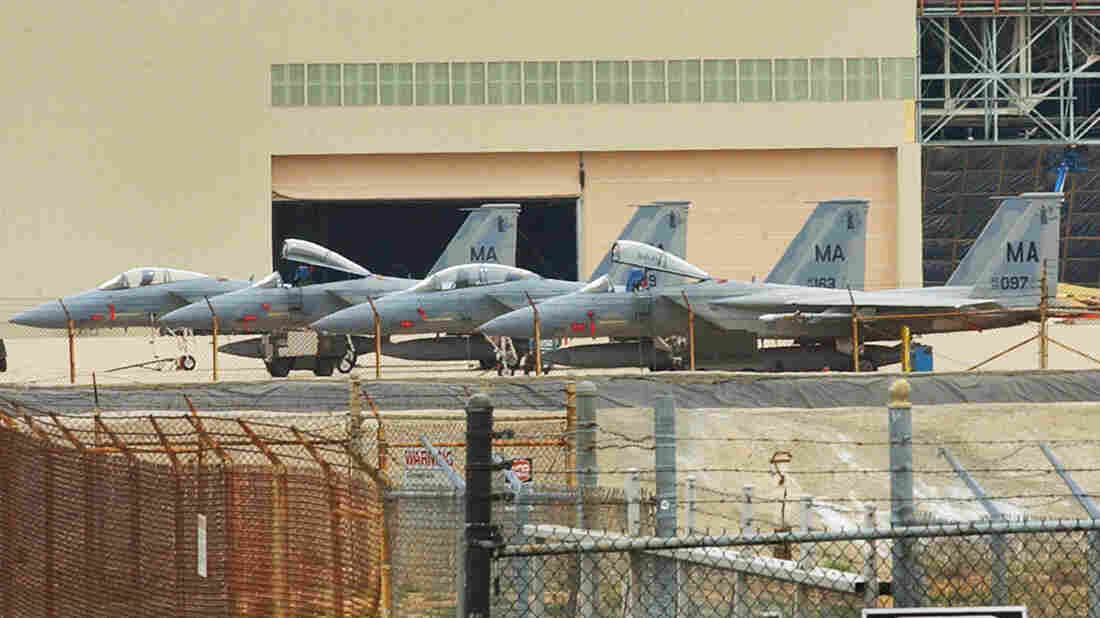 Fighter jets from Otis Air Force Base in Cape Cod, Mass. were quickly launched in response to the Sept. 11, 2001 terror attacks. State officials fought to keep the base open in 2005 and mostly succeeded, though the fighter wing shifted to cyber intelligence, surveillance and reconnaissance. Lisa Poole/AP hide caption 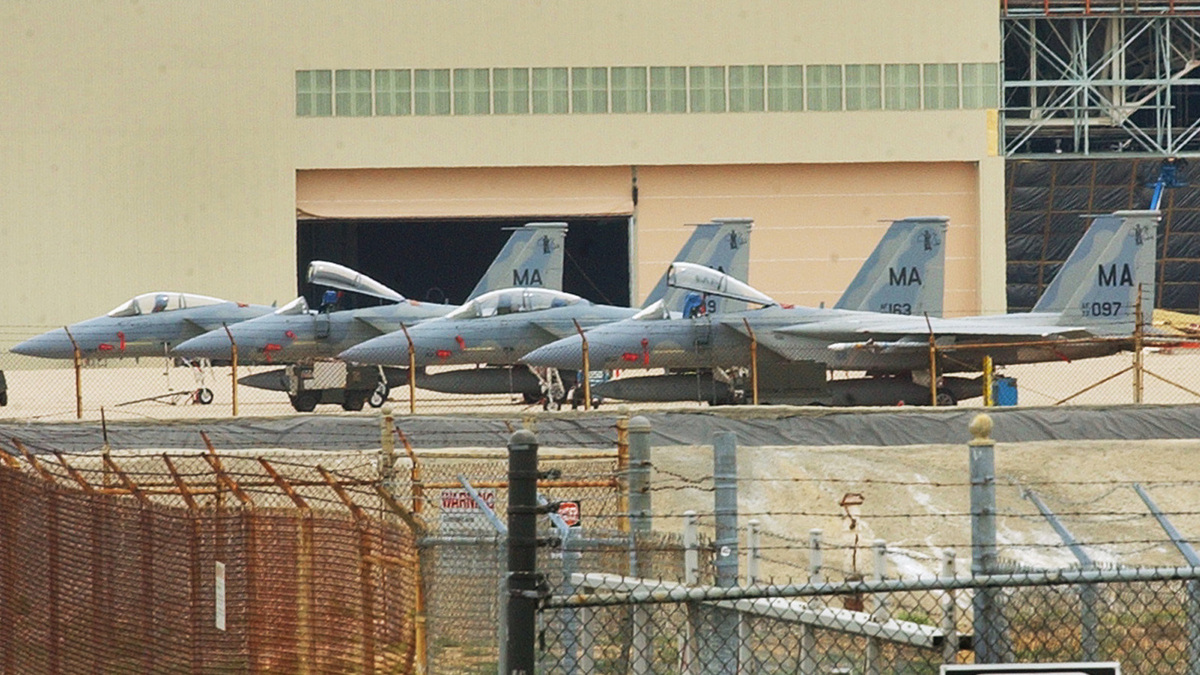 Fighter jets from Otis Air Force Base in Cape Cod, Mass. were quickly launched in response to the Sept. 11, 2001 terror attacks. State officials fought to keep the base open in 2005 and mostly succeeded, though the fighter wing shifted to cyber intelligence, surveillance and reconnaissance.

The Pentagon is pushing Congress to help it save $2 billion a year by shutting down more military bases. But Congress hates the idea, and has spent more than a decade avoiding it.

The hurt of past base closures is still fresh for military communities in Monterey, Calif. and Cape Cod, Mass. A major base in the Monterey Bay area closed in the 1990s and Cape Cod nearly lost its base more than a decade ago. So rather than anxiously wait for a congressional ax, these communities are are positioning their bases to stay relevant — from becoming a world-class language hub to parking fighter jets in favor of cyber warfare.

Every year, the former Fort Ord in the Monterey Bay Alooks less like an Army base.

"It used to be, before things happened, very almost sad to see these buildings boarded up," said Fred Meurer, a retired Army colonel who used to work on Fort Ord.

Now much of the plywood is gone. New housing is going up near a shopping center, and some of the old military buildings are now part of a university — Cal State Monterey Bay.

Nearby Monterey is still home to the Naval Postgraduate School and the Defense Language Institute, the military's language training school. Together they provide roughly 12,000 jobs.

Part of the DNA because they've been through it. After retiring from the service, Meurer was Monterey city manager and a member of the team that got Fort Ord off the base closure list in 1988. They lost that same fight in 1991.

While the region hasn't lost a military base since, preparing for a closure never stops. Last year, the city hosted a gathering to explain how it's working to protect the region from the base realignment and closure process. BRAC, for short.

There's really only one word that's appropriate ... California got gutted.

The city hired him to analyze the region's strengths and weaknesses.

"Your argument is value. You are never going to make the Monterey peninsula inexpensive. It's not possible." But, he told the crowd, just like Washington DC, Monterey can make the case that it offers something no one else can.

"It's no more possible to make the Washington DC area inexpensive, and yet there are things in DC and they stay there because the value of having them overrides the cost of them being there and you have the exact same circumstances here," said Murphy.

California actually has more native speakers of more languages than any other state, according to Census data. So the city is marketing the region as the language capital of the world.

It's argument is simple: Monterey should be home to the Army's Defense Language Institute.

"The question we will ask is where else than in Monterey," said Hans Uslar, Monterey's assistant city manager.

And his answer is: nowhere but Monterey.

"It is a huge marketplace to recruit native teaching speakers. ... I believe we are creating a good basis to not overlook California when it comes to language training and potential base closures," said Uslar.

The city has to make its case now. Even if Congress doesn't know whether or not there will be more base closures, Uslar is pretty sure he knows.

"Everyone says BRAC will never happen, yet we've had five rounds of BRAC. That's a phenomenon. So BRAC will be coming and we are preparing for that," said Uslar.

The latest Pentagon budget calls for a new round of base closures in 2021.

An "emotional" change from fighter wing to intelligence wing

Joint Base Cape Cod in Massachusetts was nearly shut down earlier this century — but the mission has changed since then as part of a plan to keep it open.

From inside a van at this base, which was once called Otis Air Force Base, the only jets seen were old, parked airplanes along the side of the road.

"The F-86, there's an F-100" said Carter Hunt of Massachusetts' economic development agency, MassDevelopment, pointing out examples of airplanes that used to work on base. He added that "every air base has lots of old aircraft hanging around waiting to fall apart."

Although Air Force fighter jets no longer fly at Joint Base Cape Cod, the base has a history.

On September 11, 2001, when the installation was called Otis Air Force Base, F-15s scrambled from the base to patrol the skies over New York City.

Four years later, the Pentagon decided the base should close.

Cape Cod: Listen to the Story

"We were still in the middle of doing combat air patrols over cities of the United States," said Col. Virginia Doonan, commander of the Air National Guard's 102nd Intelligence Wing at the base, "so it was shocking to be told we weren't going to be doing that mission anymore." 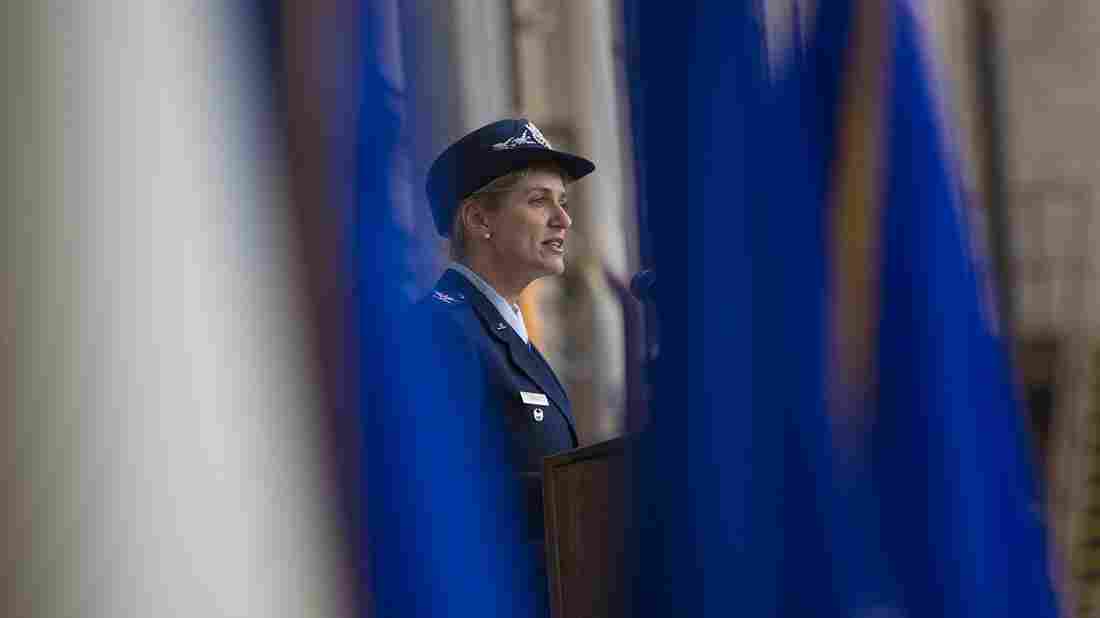 "We accepted the idea of transitioning from a fighter wing to an intelligence wing," said Col. Virginia Doonan, seen here becoming the commander of the 102nd Intelligence Wing, "and that was a pretty emotional event." Jesse Costa/WBUR hide caption 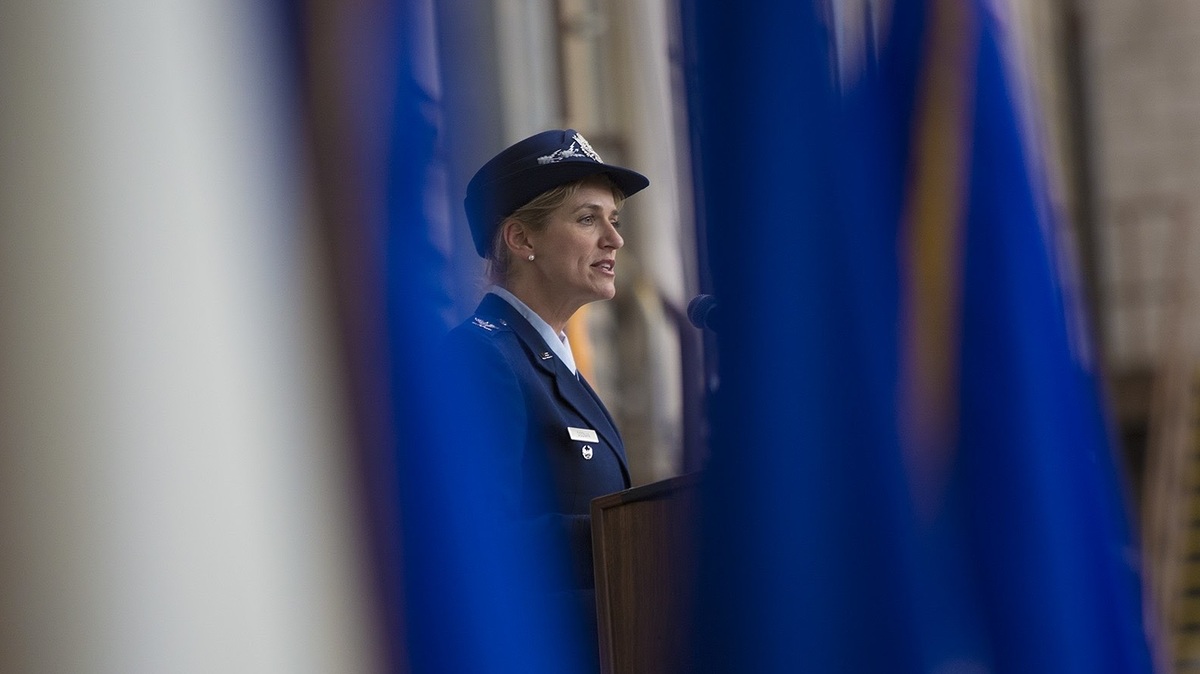 "We accepted the idea of transitioning from a fighter wing to an intelligence wing," said Col. Virginia Doonan, seen here becoming the commander of the 102nd Intelligence Wing, "and that was a pretty emotional event."

Doonan is working at Joint Base Cape Cod. The base stayed open, but with a new name, thanks to changing military missions and savvy politicians.

In 2005, the late Sen. Ted Kennedy, one of Cape Cod's most famous residents fought to save the base. "That base is absolutely indispensable in terms of our national security and in terms of homeland security," Kennedy said in a hearing on the proposed closure.

Other state political leaders spoke at the hearing and fought to save the base.

A committee, the Defense Base Closure and Realignment Commission, listened and decided keep the base open.

However, there were conditions.

All the 102nd's jets were sent elsewhere.

The wing had to take on a new role: analyzing surveillance images from drones and aircraft around the world.

"We accepted the idea of transitioning from a fighter wing to an intelligence wing," said Doonan, "and that was a pretty emotional event."

She joined the 102nd in the 1980s as a mechanic and worked her way up the ranks.

Now, she has new mission. The National Guard put her in charge of launching a cyber intelligence, surveillance and reconnaissance team on Cape Cod.

"We fight war not only on land, air, and sea, but in space now and in cyber space," Doonan said, "and that takes a unique skillset."

Cyber is the mission today, but, the community is also looking to make the base run more efficiently — a key to avoiding future closures.

Carter Hunt with MassDevelopment pointed out the changing nature of the base, including blue-door buildings that were standby hangars for F-15s that were ready to fly during the era of the September 11 attacks.

Those blue-door buildings do not make much sense for a wing that does not fly, and does most of its work in front of computer screens and video monitors.

The wing also runs the utilities for the entire base, which includes electricity and wastewater treatment.

"We need to figure out the way of reducing the cost of operations here," Hunt said.

The base is taking steps toward cutting the water bill, transferring the airfield to the Coast Guard, and handing off extra land and buildings to other federal or state agencies.

They are important steps that could protect the base from closure. Important to Joint Base Cape Cod because, after all, the base still there, even though not everyone in the area realizes it.

"I wish that people understood that Otis is not closed," Doonan said.

She's finding that it can be harder to rally the community around the cyber and intelligence missions because they are a lot quieter than flying.

"I still get that from people in the Cape Cod community that they think Otis is closed because they can't hear the airplanes," she said.