Accessibility links
Stanton: Lincoln's War Secretary NPR's Ron Elving reviews a massive new tome on the life of Edwin Stanton, certainly one of the most contentious and controversial figures in Abraham Lincoln's cabinet of rivals. 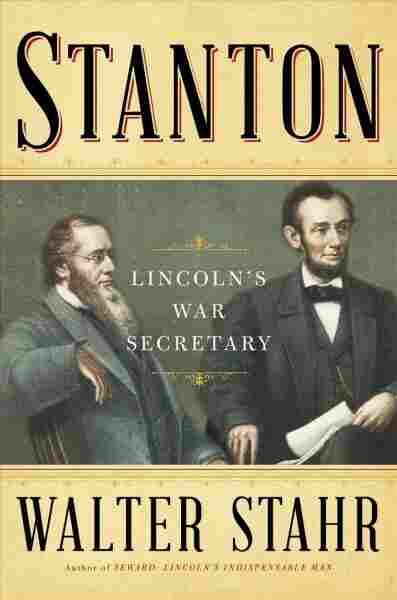 If you've heard of Edwin Stanton, it's probably because of what he did after Abraham Lincoln's assassination in 1865. Even as the Civil War president lay dying, Stanton went to work in an adjoining room — issuing orders to protect other leaders, directing generals' movements and informing the nation of Lincoln's death. He also began the search for the assassin and his co-conspirators.

"He did not announce that he was taking charge: he simply was in charge," writes historian Walter Stahr in Stanton: Lincoln's War Secretary.

Stanton's aggressive tactics that night and over the ensuing weeks have contributed to the dark side of his reputation. Some have seen him using the tragedy to empower himself, or even suspected him of involvement in the plot.

Why, such inquirers ask, were the president, vice president and secretary of state all targeted for attack but (apparently) not the war secretary, who — at that time — would have been next in line to the presidency? And how could Stanton himself be so resilient, so full of energy and so coldly efficient on that brutal night?

Stahr does not spend much time on such speculation, and this fresh tome (nearly 700 pages with notes and bibliography) is far more than a rebuttal to Stanton critics, past and present. What Stahr has harvested here from notes, letters and memoirs reveals the man who could behave as Stanton did on that night and in many other controversial moments.

Above all, we learn that Stanton's resilience and seriousness were rooted in his personal experience, his religiosity and his close acquaintance with death. Still a boy when he lost his father, he also lost a brother to suicide, and one of his sisters died quite young. His infant son James died in the midst of the war years, when Stanton was also mourning the loss of friends and the children of friends — personal sacrifices for which he grieved even amidst the larger carnage he was supervising.

But it was the death of Stanton's first wife, Mary, after just two years of marriage, that plunged him into despair and left him seeming older than his 30 years. Thereafter, he was characterized by a sense of fate and a deep reliance on the Scriptures and the church (raised a Quaker, he later moved to Methodism and then became a mainstay of the Episcopal Church of the Epiphany in Washington).

A History Of Rivals In The White House

A History Of Rivals In The White House

But the Stanton most students of the Civil War will recall is the strong-willed combatant who struggled with rivals in Lincoln's cabinet and with the generals he trusted to carry the Union cause. First among these was George McClellan, the brilliant young commander who built and trained the Army of the Potomac but was loath to risk it in battle. While Lincoln was the ultimate civilian authority, it fell to Stanton to play the bad cop, admonishing and hectoring McClellan (who called Stanton "the vilest man I ever knew").

Stanton was in some ways a curious choice for his job. Neither a Republican nor a Lincoln supporter before the war, he was notably unimpressed with the new president on first meeting. But he was an accomplished lawyer with a national reputation and a gift for organization. He had shown the ability to master a vast amount of information in a short time and, most critically, an almost superhuman capacity for hard work. One contemporary marveled at his "untiring industry," and Stahr too finds it awe-inspiring to describe Stanton's days and nights in the War Department's telegraph office — sleeping fitfully on a horsehair couch.

Stanton suffered from asthma and other ailments and never served in the military. But he devoured the history of tactics and strategy and immersed himself in the minutiae of logistics. His mastery of the latter is demonstrated by his emergency transfer of 20,000 troops from Virginia to eastern Tennessee by a circuitous rail route stretching from Washington to Indianapolis and south as far as Alabama.

Stanton also weaponized the telegraph and developed a system for sending official messages to a key general in New York as a means of sharing them with the press, thereby informing the public even as he controlled and carefully censored the news the public would receive.

Stanton was also the tip of the spear for policies that angered many at the time and cast a shadow over the Lincoln years even now. These included elements of martial law, the suspension of the right of habeas corpus and the extensive use of military commissions to prosecute civilians.

Perhaps the most notorious of these commissions was convened for the seven men and one woman accused in the Lincoln assassination plot. After the assassin John Wilkes Booth was hunted down and shot dead, seven of his alleged co-conspirators were arrested and imprisoned in dungeon conditions even before they were convicted. (Four met the hangman, including Mary Surratt, who ran the boarding house where the conspirators met.)

Stahr tries to sort out the conflicting accounts of his subject, both contemporaneous and present-day, making his own judgments as to which tales are true and which apocryphal. Stanton had the respect of many but also inspired intense dislike and even hatred among colleagues and opponents alike. A relentlessly competitive advocate, he was also sensitive to changes in the political climate and sophisticated about the use of power. Stahr concedes he could be "duplicitous and even deceitful."

Stanton understood that the glory of victory would belong to the generals, once he had found the ones who were eager to fight and finally win. One of these was Ulysses S. Grant, who became an important ally. Another was the more antagonistic William Tecumseh Sherman, who became an implacable adversary.

Stanton also knew he would be pilloried for every failure and overreach of his own as well as those of his White House boss. Lincoln was often caricatured as a rube or a simpleton, Stanton as a bewhiskered and evil gnome. (One general's aide-de-camp described the war secretary as "short, dark, very thick set, very big headed [with] a somewhat goblin air.")

But Stahr also locates Stanton on the more progressive side of certain wartime questions, such as the use of what were then called "colored troops" — freed slaves and other African-Americans — within the Union army. At first, many in the military (including the cantankerous Sherman) preferred to relegate the freedmen to support roles, such as tending mules. Stanton was among those pressing to give these men full status, including equal pay.

The war ground on for four years before Robert E. Lee surrendered to Grant at Appomattox. Just days later, Lincoln was shot and Washington plunged into chaos. Stahr shows us Stanton confronting that crisis as he had so many others, with specific orders, definite plans and ferocious energy.

In the postwar years he focused on the military administration of the vanquished Southern states. This led to repeated and bitter clashes with Andrew Johnson, the Tennessean who was Lincoln's vice president and successor in the White House. Stanton had grown to respect Lincoln's leadership and the two had become quite close by the war's end. No such progression took place with Johnson, who wanted to be more generous to secessionist states and former rebels — and who abhorred the thought of giving black men the vote.

Moving swiftly across the enormous landscape of Stanton's life and times, Stahr provides a narrative that is both readily accessible and compelling for scholars long familiar with the basic facts.

Johnson tried twice to remove Stanton from office, leading to the first impeachment of a president by the House of Representatives. But when the Senate failed (by one vote) to convict Johnson, Stanton was forced out. His health failing, he still campaigned vigorously for Republicans in 1868, including Grant, who was elected president that year.

Grant would nominate Stanton for the Supreme Court the following year with immediate Senate confirmation. But Stanton was already on his death bed, suffering from complications of asthma exacerbated by exhaustion, and he succumbed just four days later.

Moving swiftly across the enormous landscape of Stanton's life and times, Stahr provides a narrative that is both readily accessible and compelling for scholars long familiar with the basic facts. Stahr finds in even the more ephemeral material insights into the ways Stanton stood out from his cohort while embodying the virtues and limitations of his times.

Although not a superlative stylist, Stahr is a steady, even-keel narrator who navigates each controversy with clarity and care. He relies in large measure on the prose of his primary sources, whom he quotes extensively. His own writing serves to stitch together the many pieces of 19th-century fabric he has gathered in years of research. (Stahr is also the author of Seward: Lincoln's Indispensable Man.)

As for Stanton, he emerges as the kind of historical figure who makes you wonder — did he generate conflict, or was he just attracted to it? Stahr makes a convincing case that Stanton willingly and repeatedly sailed into troubled water throughout his life because he felt himself needed there — and with good reason.