Accessibility links
In 'The Book Emma Reyes,' Life Through A Child's Clear Eyes As an adult, the Colombian painter Emma Reyes lived in Paris and befriended Frida Kahlo. But in a series of autobiographical letters, she describes a childhood of grinding misery and poverty. 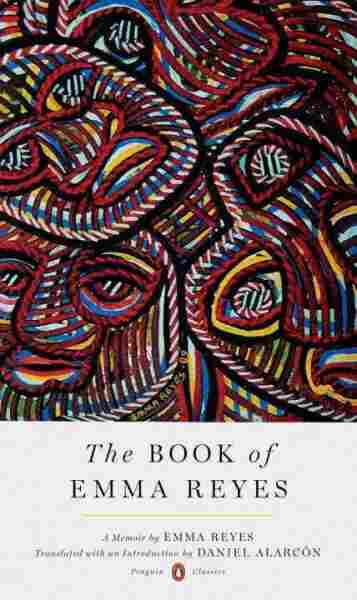 The Book of Emma Reyes

by Emma Reyes and Daniel Alarcón

It's very tempting to believe that The Book of Emma Reyes is not a memoir. Not a conventional memoir, at least. It's easy to see it as a found document, a work of accidental and miraculous genius. That's how it's presented, and, to be fair, more or less how it was conceived. The Book of Emma Reyes is a series of letters that the Colombian painter Emma Reyes wrote to the historian and critic Germán Arciénagas, at his request. Apparently she was an exceptional storyteller, and Arciénagas was determined that her anecdotes about her childhood — which had been one of near-surreal neglect and poverty — be preserved.

Reyes claimed she couldn't possibly write a book. In his introduction, translator Daniel Alarcón writes that "she protested that she found it difficult to organize her thoughts," and that when she agreed to write Arciénagas her life story in letters, she expected them to be confidential. But later, once they were done, she agreed to have the letters published. She edited them, and Alarcón makes sure to note that she was proud of them. And she was proud for a reason: Her writing is exceptional. Several times while reading, I gasped out loud at the beauty of her prose. It's some of the best writing I've read in years. So why would I have the impulse to think of The Book of Emma Reyes as something less intentional or less sophisticated than each of its sentences?

Her writing is exceptional. Several times while reading, I gasped out loud at the beauty of her prose.

Part of the answer is the form. Each letter starts without connecting to the last, and each one ends with a few lines of small talk that can be deeply jarring. In one gorgeous passage, Reyes describes a terrifying moment during a town festival: a monster appears, black and noisy, with eyes "so bright they lit up half the plaza. People fell to their knees and began to pray and make the sign of the cross ... Some men advanced toward the square with large sticks in their hands. The beast stopped in the middle of the street and closed its eyes. The first automobile had arrived in Guateque." Then, with no transition or warning: "Bye. Tonight the first human landed on the moon. Kisses." And the letter is over, just like that.

But of course, that moment is calculated. Reyes, as editor, opted to keep those last lines in place, and look at the juxtaposition they contain: in the space of the word bye, she goes from a child who sees a car as a monster to an adult who can mention the first lunar landing in passing. The move seems casual, but it's not. It's a perfect demonstration of the difference between the Emma Reyes in the letters and the Emma Reyes who wrote and edited them.

By the time Reyes began writing her stories down, she was an artist living in Paris. She had traveled the world, befriended Frida Kahlo, become the Gertude Stein-style heart of a circle of Latin American expatriates. The child in The Book of Emma Reyes did not have the tools to imagine that life. As a child, Reyes couldn't understand the concept of "far from Bogotá," let alone that of Paris. In the first letter, perhaps the most beautiful of the book, she's a tiny child playing in a garbage dump, worshiping a mud figurine named General Rebollo. She doesn't know what a dad or a mom are, what a donkey is, what the word straighten means. The letters come from her perspective, not that of the adult Emma. They're written with beauty and clarity, but almost never with commentary. They seem to come directly from the little girl who, asked who her mother is, says, "The chocolate shop."

As a narrator, Reyes never tells us what the arc of her story will be. She doesn't analyze, accuse, or defend. She just lets us watch her survive, and then grow.

The moments of cruelty, too, come through a child's eyes. When her mother – whom young Emma calls Mrs. María — has a new baby, she neglects him so deeply that, Reyes writes, "I had the impression that no one took care of the Boy ... that he was mine alone." She adores the baby and takes responsibility for him, though she's barely more than a toddler. And when Mrs. María directs her servant Betzabé to abandon the baby in the woods, she has Betzabé bring Emma along. Emma is devastated. She never speaks of the Boy again.

This total fidelity to her childhood view of the world is what makes The Book of Emma Reyes seem deceptively unlike a memoir. As a narrator, Reyes never tells us what the arc of her story will be. She doesn't analyze, accuse, or defend. She just lets us watch her survive, and then grow. In the final letter, Emma steals the keys of the convent in which she's lived for years. The book ends as she creeps out the door, frightened but determined. "I realized," she says, "it had been a long time since I was a girl." There's the adult Emma Reyes, addressing the reader directly for the first and only time. It's the perfect ending. And it's a classic memoir ending, too. She might not be her artist self yet, but she's ready. She's all grown.