Accessibility links
'What She Ate' Reveals The Plates And Palates Of 6 Notable Women Laura Shapiro has likened her method of biographical research to "standing in line at the supermarket and peering into the other carts." Critic Maureen Corrigan says her resulting book is fascinating. 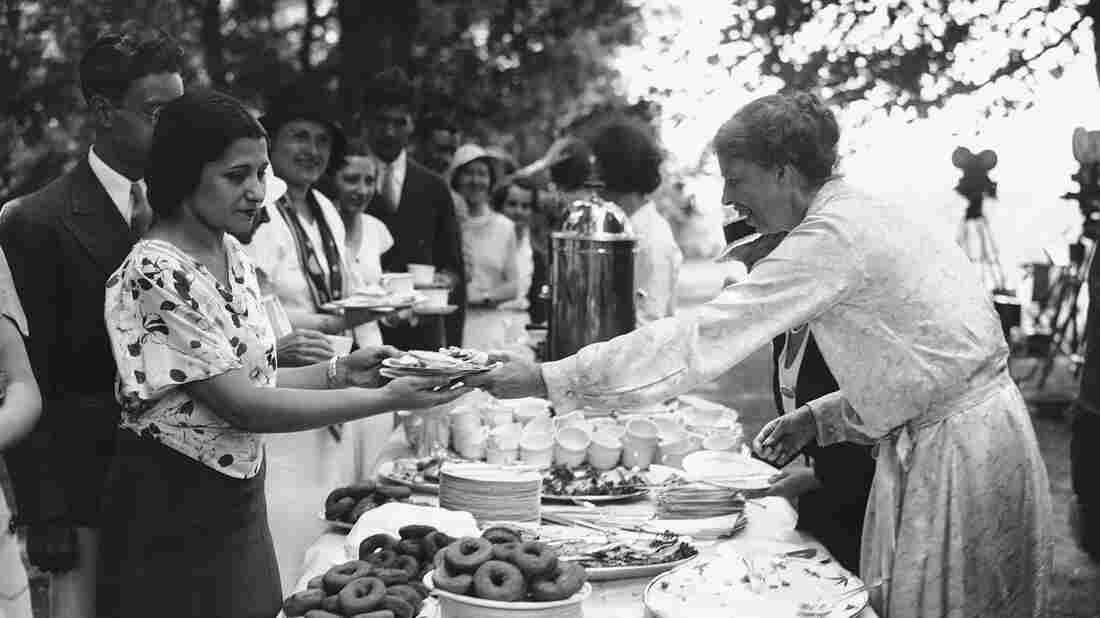 Eleanor Roosevelt presides over the table at a dinner celebrating her husband's victory in the 1932 Democratic presidential primary. Author Laura Shapiro notes that later, as first lady, Roosevelt would seem "apathetic about what was on her plate" while in the White House. Anonymous/Associated Press hide caption 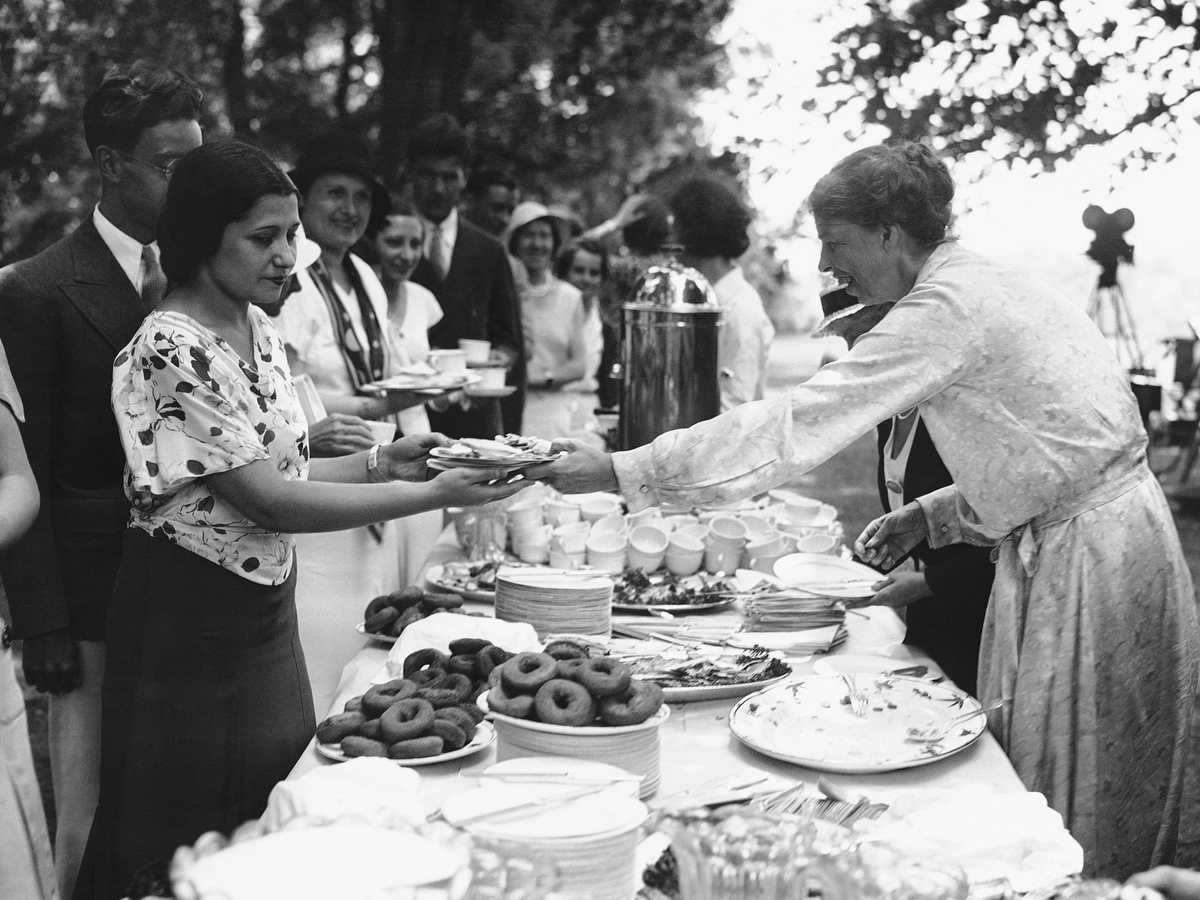 Eleanor Roosevelt presides over the table at a dinner celebrating her husband's victory in the 1932 Democratic presidential primary. Author Laura Shapiro notes that later, as first lady, Roosevelt would seem "apathetic about what was on her plate" while in the White House.

Back in the late 1980s, when I was first starting out as a critic for The Village Voice, one of the books I was assigned was Laura Shapiro's Perfection Salad, a social history of the home economics movement during the turn of the last century.

I can't recall many of the other books I reviewed in those days, but Perfection Salad has remained indelibly with me. Shapiro helped break new ground by taking the history of women, housework and cooking seriously, even as her witty and vivid writing style was decidedly un-solemn. Now, some 30 years later, Shapiro has done it again, this time, breaking new ground in the art of biography by taking the adage, "you are what you eat," literally.

Shapiro's fascinating new book is called What She Ate, and it focuses on the lives of six women from different centuries and continents — all prominent to different degrees. Among them are Dorothy Wordsworth, the poet's shy, worshipful sister; Eva Braun, Hitler's mistress and 11th-hour wife; and Helen Gurley Brown, the whippet-thin, legendary editor-in-chief of Cosmopolitan.

All six women have been the subjects of earlier biographies, but, as Shapiro points out: "Biography, as it's traditionally practiced still tends to honor the old fashioned custom of keeping a polite distance from food." In contrast, Shapiro likens her method of biographical research to "standing in line at the supermarket and peering into the other carts." 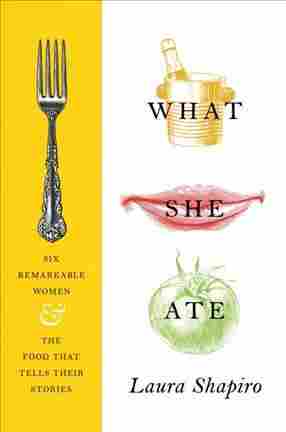 Six Remarkable Women and the Food That Tells Their Stories

In the resulting portraits, Shapiro, like a consummate maître d', sets down plate after plate of the food these women cooked, ate or thought about and an amazing thing happens: Slowly the more familiar accounts of each of their lives recede and other, messier narratives emerge. As Shapiro says: "[O]ur food stories don't always honor what's smartest and most dignified about us. More often they go straight to what's neediest."

Take the chapter here on Eleanor Roosevelt, certainly one of the most chronicled women in history. The common wisdom is that food was mere fuel to Roosevelt. Shoring up this official story is the fact that Roosevelt hired as her White House chef, Mrs. Henrietta Nesbitt, whom Shapiro calls "the most reviled cook in presidential history." Here's a sampling of the regularly repeated White House luncheon menu, made from leftovers:

Shapiro surveys the well-mined trove of Roosevelt's letters, memoirs and newspaper columns and spots a striking pattern: "Inside the White House, [Roosevelt] was apathetic about what was on her plate." Outside, she "discovered the delights of appetite," enthusing, for instance, over the popovers she made for her beloved bodyguard Earl Miller in the 1930s or "a delicious Arab dinner" she enjoyed in Beirut in 1952.

As Roosevelt herself said in looking back on her White House years, "I had erected someone outside myself who was the President's wife." Shapiro's astute reading of Roosevelt's "food trail" testifies to Roosevelt's distaste for that official role.

The Braun chapter here is practically the insane inverse of Roosevelt's and every bit as illuminating. Since Braun's existence as Hitler's mistress was kept secret from the public, she gloried in her private and very feminine role as hostess of the meals at Hitler's mountain retreat, where high-ranking Nazis "feasted on the rightness of their cause."

Shapiro opens Braun's life story with its chilling end: late April 1945, when she and Hitler were hiding in the Berlin bunker where they would commit suicide. Braun welcomed architect Albert Speer to the bunker for a frantic good-bye visit and, as he recalled in his memoir, Braun, ever the enthusiastic hostess, "radiated an almost gay serenity. "How about a bottle of champagne for our farewell? [Braun asked] And some sweets? I'm sure you haven't eaten in a long time." As Shapiro says, "the guilt-free zone in the heart of Hitlerdom" that Braun helped create through gourmet meals held fast to the very end.

Several times throughout What She Ate, Shapiro repeats what surely is one of her life's mantras: "Food talks — but somebody has to hear it." How lucky for us readers that Shapiro has been listening so perceptively for decades to the language of food.