Accessibility links
With North Korea Threats, Here's A Fact Check Of U.S. Nuclear Arsenal's Strength President Trump is in a war of words with North Korea and boasted American strategic power. It's still highly potent — but a shadow of its former self. 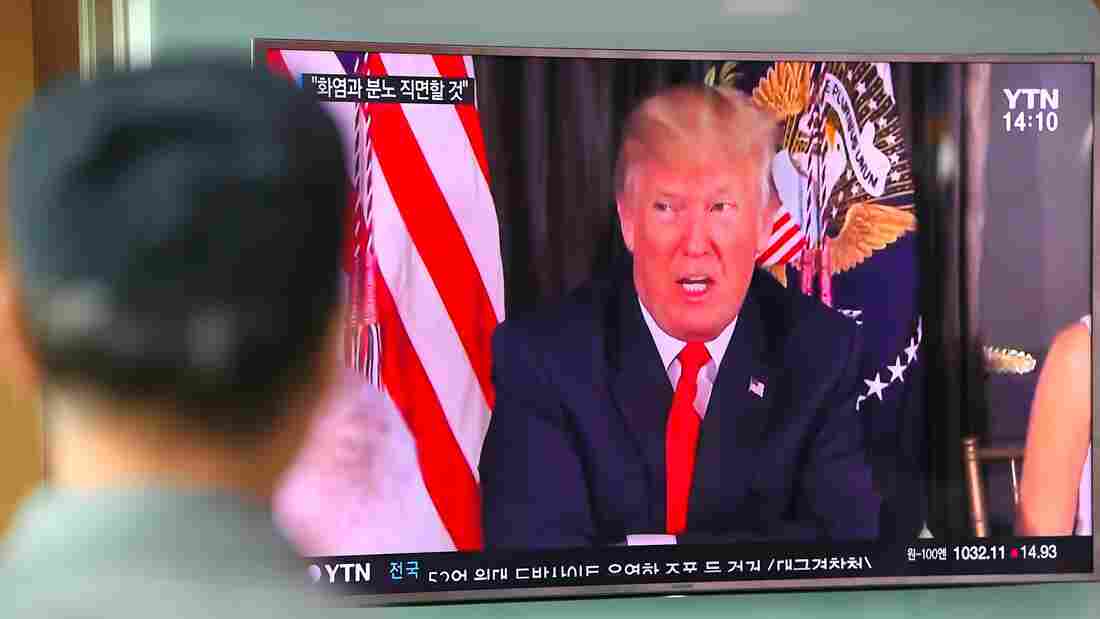 A man watches a television news program showing President Trump at a railway station in Seoul on Wednesday. Trump warned North Korea on Tuesday that it faces "fire and fury" over its missile program. Jung Yeon-Je/AFP/Getty Images hide caption 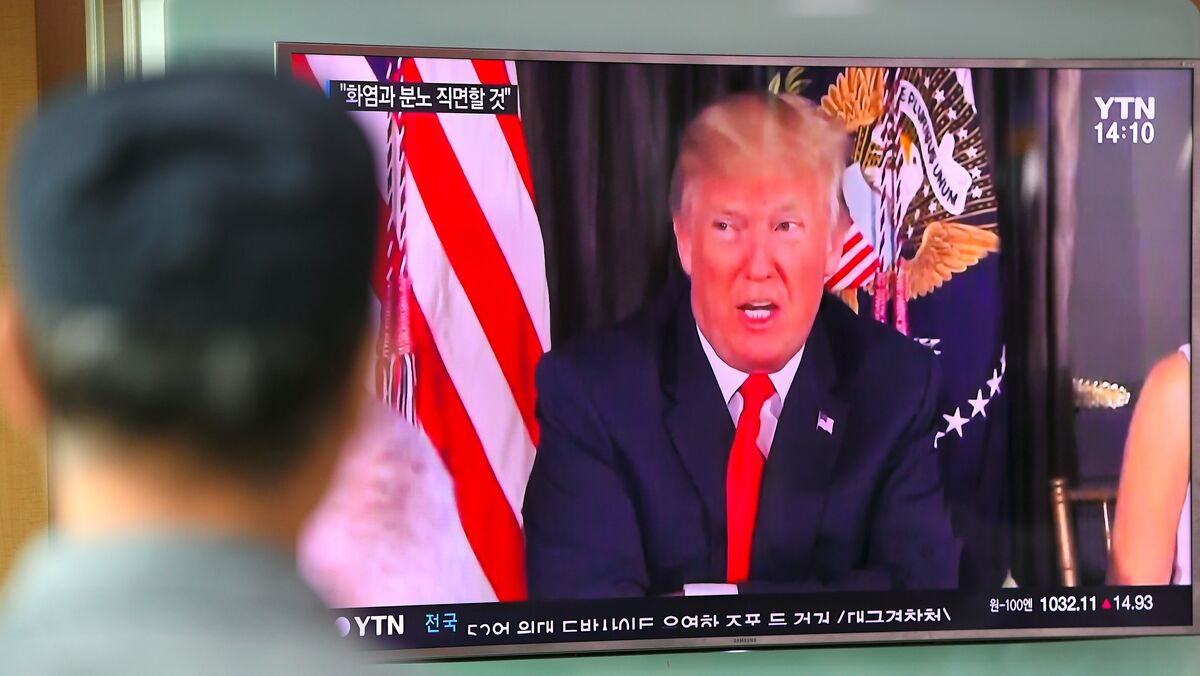 A man watches a television news program showing President Trump at a railway station in Seoul on Wednesday. Trump warned North Korea on Tuesday that it faces "fire and fury" over its missile program.

America's vast arsenal of nuclear weapons — delivered via bombers and intercontinental missiles launched from land or sea — didn't disappear after the end of the Cold War.

It's still very much around, unimaginably powerful and ready for use at a moment's notice. The question President Trump raised on Wednesday is how it compares today to what the Air Force and Navy have deployed in the past.

The claim: The nuclear arsenal "is now far stronger and more powerful than ever before."

The long answer: Trump is rattling the nuclear saber following reports that North Korea might have built a nuclear weapon that it could fit atop a missile capable of hitting the United States.

The threat of an attack from North Korean strongman Kim Jong Un has been building for years, and Trump warned this week that Pyongyang's bellicose statements would be met with "fire and fury like the world has never seen."

My first order as President was to renovate and modernize our nuclear arsenal. It is now far stronger and more powerful than ever before....

By virtually any measure, however, the U.S. nuclear arsenal is smaller and less powerful than it was at its Cold War peak. The Air Force and Navy have the fewest strategic bombers and submarines ever, carrying fewer weapons than they ever did.

Today, the United States has a total of roughly 4,480 nuclear weapons, according to the Bulletin of the Atomic Scientists' "Nuclear Notebook," of which roughly 1,740 are deployed. Under the New START treaty with Russia that took effect in early 2011, Washington and Moscow have agreed to a limit of 1,550 total deployed weapons.

The arsenal isn't just smaller in terms of numbers of nuclear warheads. The weapons themselves are less powerful: the Titan missile, for example, carried a 9 megaton warhead, several orders of magnitude more destructive than the ones fielded now.

The Air Force bomber force today is a fraction of the hundreds of aircraft that were once under its Strategic Air Command. The successor Global Strike Command today operates 400 land-based Minuteman III intercontinental ballistic missiles at bases in three states, as compared with the peak of 1,000.

As for the Navy, its aircraft carriers no longer carry tactical nuclear weapons, nor do its surface warships carry nuclear-capable cruise missiles.

Only the Navy's 14 ballistic missile submarines, which operate from bases in Georgia and Washington state, continue to sail with the intercontinental weapons they can launch while submerged. Each ship was built to accommodate 24 missiles but will have four of its tubes permanently made useless as the U.S. complies with New START.

The ships are approaching the end of their service lives, however, and the Air Force's bombers and missiles also are the same ones that served in the Cold War for decades. The Pentagon wants to replace all of them.

Those programs, combined with other upgrades to the U.S. strategic infrastructure, could cost as much as $1 trillion over the coming three decades.

Ironically, much of the modernization was set in motion under President Barack Obama, who was a lifelong opponent of nuclear weapons, negotiated New START and became the first sitting president to visit Hiroshima, site of the world's first nuclear attack by the United States in World War II.

Defense Secretary Jim Mattis said Wednesday that the United States and its allies have more than what they need to end any potential conflict with North Korea.

"While our State Department is making every effort to resolve this global threat through diplomatic means, it must be noted that the combined allied militaries now possess the most precise, rehearsed and robust defensive and offensive capabilities on Earth," his statement said.