Accessibility links
Remembering 'Rhinestone Cowboy' Glen Campbell We revisit Campbell's 2008 interview on Fresh Air, where he talked about his childhood, his 1967 hit "Gentle on My Mind" and his battles with substance addiction. 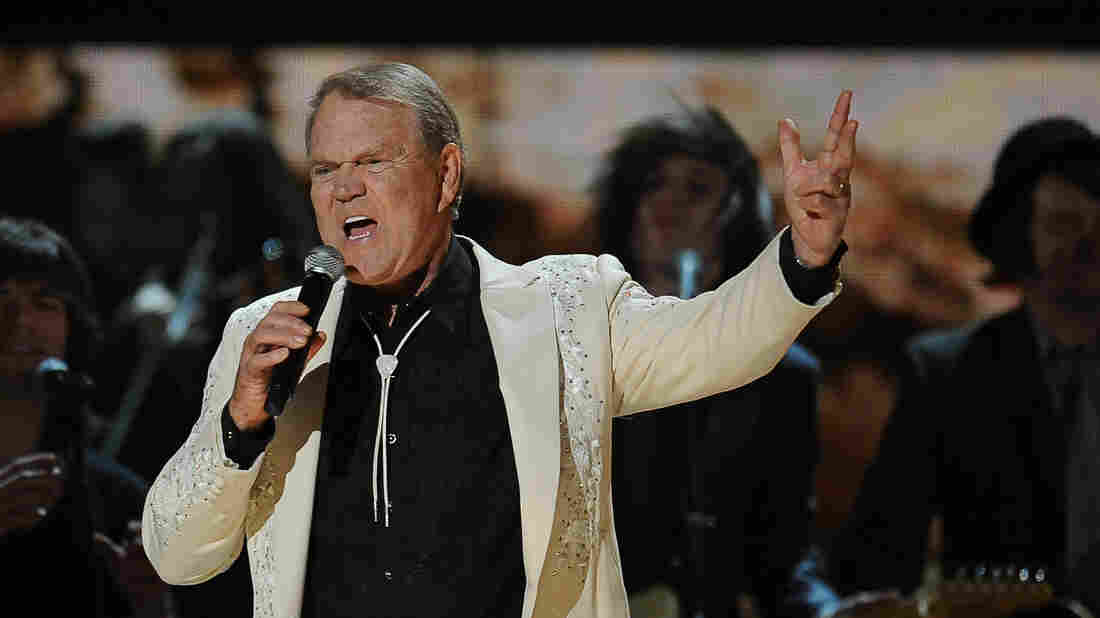 Glen Campbell performing at the Grammys in 2012. Campbell died on Tuesday at the age of 81 following a long, public struggle with Alzheimer's Disease. Robyn Beck/AFP/Getty Images hide caption 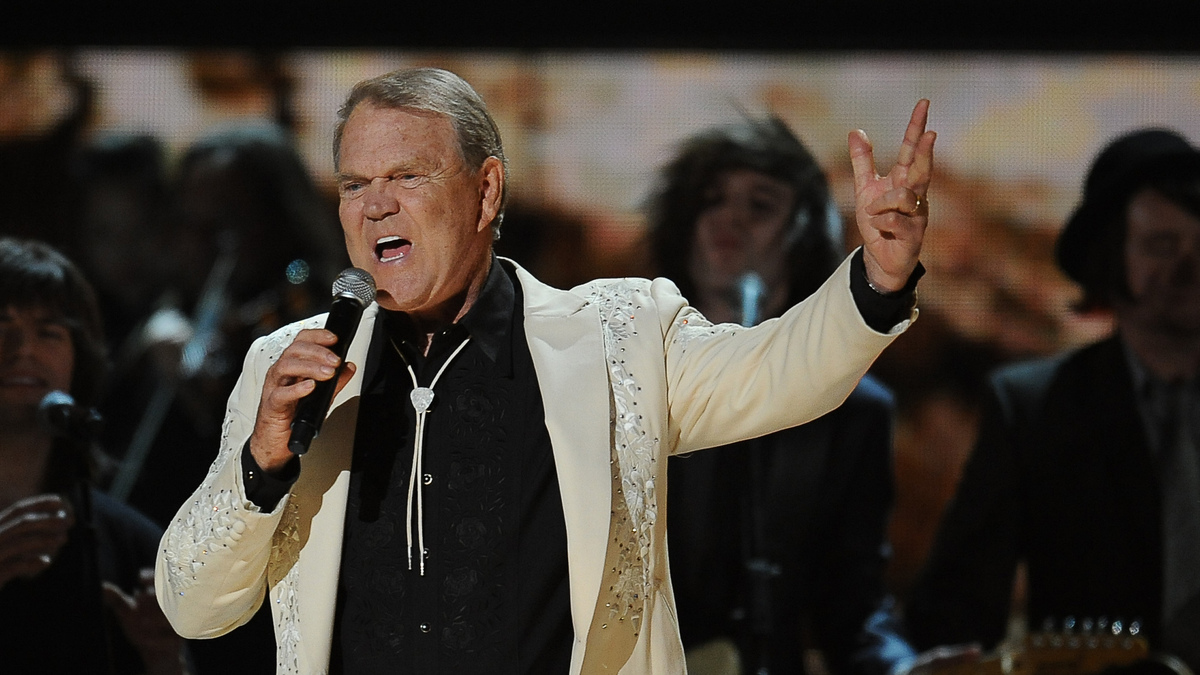 Glen Campbell performing at the Grammys in 2012. Campbell died on Tuesday at the age of 81 following a long, public struggle with Alzheimer's Disease.

Glen Campbell, the country music legend behind the classics "Wichita Lineman," "Galveston" and "Rhinestone Cowboy," among others, died on Tuesday after a long, public struggle with Alzheimer's Disease. He was 81.

Campbell had his biggest hits in the '60s and '70s, including "By the Time I Get to Phoenix," "Southern Nights" and "Gentle on My Mind," which was also the theme of his TV show, The Glen Campbell Goodtime Hour.

Before beginning on his solo career, Campbell played on many Beach Boys records, also touring with the group in 1964. He also played guitar with the legendary group of Los Angeles studio musicians known as the Wrecking Crew, whom he continued to collaborate even after his solo success. Many of them played on his hit records.

Though Campbell's life at times seemed charmed, he battled drug and alcohol addiction and, in 2011, revealed his Alzheimer's diagnosis. He continued to tour for another 15 months, before recording his final album Adiós, released this past June.

On younger listeners getting introduced to Campbell and his music

"A good song is a good song. A lot of people, they listen to a good song but they ain't got a hole in their ear. I don't know where that came from. But the songs that we picked [for Meet Glen Campbell], the country, the rock, the whatever kind of music you say it is, I never really looked at it like that. I looked at it as just being good music. But ... people seem to like they wanted to pinhole things, you know, "This is country and this one is rock and this one is pop." You know, I never looked at music like that. ... I just wanted to do it like what the song called for, and people, they make up their own mind whether it's country, rock, pop or crock."

On his childhood in Arkansas

"As soon as you got old enough to milk the cows, you milked the cows. It was — slop the hogs. We didn't have electricity when I was a kid. We had to watch TV by candlelight. No, that's a silly joke. But I did the chores, and ... we didn't have electricity, and we farmed. Daddy, I remember when he first let me drive the cultivator for him, you know. ... He eased you into the hard work that you had to do later."

On how his solo career began

"Before ... I was in a position where I didn't have to go out and knock on doors. Everybody — and then a lot of people didn't even — the guys didn't know I could sing. And when I started [my solo career], I got more kidding from the musicians because the same guys that I was playing with on all those sessions, they all played on my stuff, you know, whether it was 'Rhinestone Cowboy' or 'Wichita Lineman,' 'Galveston' ... It was the same guys, and it was so much fun in the studio with them because, 'Hey, old big shot's back with us, boys,' you know. Especially during the TV show. I went in and did sessions with people while I was doing the TV show. I missed ... the camaraderie with the musicians."

"John Hartford, he did the song, and I said, 'Boy, it takes too long to get to the next verse, that's slow.' And I just did it — I got a comfortable time on the song, you know, whether do it slow, medium, and I just got it to where I could talk the song like, [singing] 'It's knowing that your door's always open and your path is free to walk.' I just put it in a tempo that was comfortable, like I would be talking it, without singing the melody.

"['Gentle on My Mind'] changed everything. We did The Summer Brothers Smothers Show; that just exploded everything. EMI ... had every press in town, every guy that could press records doing Glen Campbell records.

"And then you come out and people see you on TV. TV is just an incredible media. I had all that I had recorded and they'd [be in the] middle of the charts ... some of them didn't even get in the charts. But it didn't matter what it was after the TV show. Everything got in the charts and almost all of them went to No. 1. It was just amazing."

"That's a long story. It wasn't nobody's fault but mine and my ex-wife. She was, God rest her soul, she didn't live very long. She was really into all that stuff. And it really broke me. As they say back home, it broke me from sucking eggs.

"I just, I stopped doing all of it when I looked around. When I actually looked around to see what my life was doing then and what I was doing with it ... it was like I was trying to destroy myself, or I really didn't care, you know, because I had no reason for it, actually, except some — a lot of people done me dirty. And, of course, I probably did dirt to a lot of people. But I decided to just let God handle it. And I'll do as much as I can."

Danny Miller and Therese Madden produced the audio of this interview. Web intern Karen Gwee adapted it for digital.