Accessibility links
Stream Shelby Lynne & Allison Moorer's New Album, 'Not Dark Yet' The songwriting sisters finally team up for the collaborative album their fans have been waiting for.

The songwriting sisters finally team up for the collaborative album their fans have been waiting for. 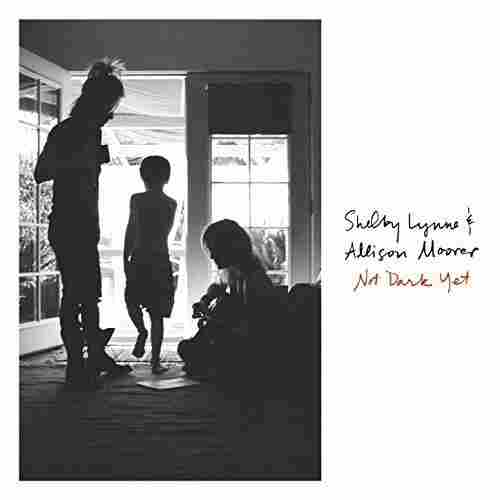 There was a time, earlier in their careers, when Alabama-born sisters Shelby Lynne and Allison Moorer took care to give each other space. They seldom showed up on each other's recordings or offered on-the-record comments on each other's careers. They could probably sense the mystique building around the two of them, partly because of the way people fixated on the shared tragedy in their pasts, but mostly because we've so rarely seen sibling artists mine their common musical roots in southern pop, country and soul traditions while fashioning utterly distinct identities for themselves, Lynne an embodiment of tough-minded sensuality, Moorer a model of introspective elegance.

Both were in the spotlight by the late '90s, with Moorer kicking off a run of high-quality singer-songwriter albums on major country labels and Lynne (as I described in an entry on our Turning the Tables list) getting distance from Nashville in order to strike out as a cool, cutting contender in the world of grown-up pop. At some point along the way, people started asking them when they might make a record together, and they fed that interest by teaming up for their 2010 Side By Side tour and mentioning plans to record. Lynne was deliberately low-key about it. "We're just a couple of singers who happen to be sisters ... getting together to write songs and see what we can do together," she told one interviewer. When the sisters temporarily shelved the idea, listeners were left to hash out their own ideas about what kind of album they should or would make someday.

Despite the buildup of anticipation, Not Dark Yet, Lynne and Moorer's long-awaited joint album, feels unburdened by expectations. The two songwriters included just one original, the hymnlike co-write "Is It Too Much," and selected nine other songs to interpret together. That and the sparseness of Teddy Thompson's production help place the focus squarely on the voices, how phenomenally well-matched they are in their suppleness, how they resist and yield to each other.

By including songs learned long ago from their parents' records — the Louvin Brothers' "Every Time You Leave," Merle Haggard's "Silver Wings," Jessi Colter's "I'm Looking For Blue Eyes" — Moore and Lynne invoke their history of singing together from the time they could talk. But to dwell only on the naturalness and familiarity they've cultivated as singing partners who happen to share some genes is to overlook some of their partnership's most compelling qualities. Their version of sibling harmony isn't frictionless — it's born of a deep empathy that embraces individuality, that makes room for the approaches to expression they've each developed over the course of almost five decades.

Lynne and Moorer have many ways of performing closeness. Moorer begins "I'm Looking For Blues Eyes" alone, her notes gracefully wilting with melancholy, then Lynne slides beneath the melody ever so gently, careful not to disturb Moore from her anguished reverie. They reverse their roles in "Silver Wings." In their riveting, deconstructed folk-rock reading of The Killers' ballad "The List," a Moorer suggestion, they deliver the verses separately, then cleave to each other during the eruptive chorus.

Throughout "Every Time You Leave," Lynne and Moorer sing together, sensitive to the shifts in each other's inflections, but there's also a certain willfulness to their harmonizing, as though they chose not to tamp down the textures of their vocal attacks. Their reading of Nick Cave's "Into My Arms," stripped of all traces of the original's lounge act irony, is all the more fetching because of the deft way they blend and convey shared reverence for the act of emotional surrender.

They alternate verses during "Not Dark Yet," a latter-day gem from Bob Dylan's catalog, and make their perspectives felt in the act of interpretation, with Moorer tipping toward the contemplative and Lynne summoning cavalier defiance. And their self-penned album closer, "Is It Too Much," is a startling display of intimacy, a tender acknowledgement of each other's wounds and an invitation to vulnerability. They oscillate between singing solo and together during the bridge: "Bring it here to my side / Tell me about the tears you've cried / Lord knows you must be tired by now / Whisper what you never tell / Don't you know you ain't by yourself / I'm right here to help you lay it down."

"For me, it's about the deep bond we share that transcends all things," Moorer said of the song. "...That doesn't mean that we're the same creature or even always on the same page, but it does mean none of that matters. No one knows either of us the way the other one does."

The humanizing insight she and Lynne have, at long last, brought to the tradition of familial music-making is a revelation.