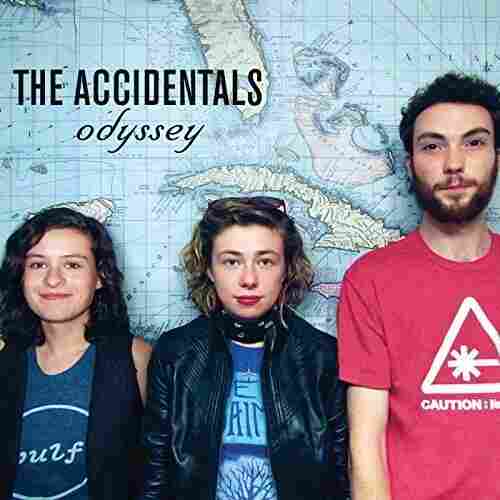 It wasn't all that long ago that the qualities valued most highly in the youthful sectors of folk-pop and folk-rock were earnestness and simplicity. This was music made with minimum fuss — all four-on-the-floor foot stomps, straight-ahead strumming and spirited sing-along choruses.

The Accidentals were surely aware of that movement, though they'd barely reached high school in Traverse City, Mich., when Mumford & Sons blew up. But even back then, violinist Savannah Buist and cellist Katie Larson were occupied by making familiar MGMT and Led Zeppelin songs into pieces to which they could apply their classical chops. The impulse to make imaginative use of technique has been their organizing principle ever since. Larson and Buist, both multi-instrumentalists, even chose a geeky-cute band name taken from notes that surprise the ear because they deviate from they key that a composition is in. The bookish lyrics of "Odyssey," their new album's cinematic title track, declare a similar penchant for journeying off the path: "But I'm not weak; my brain's a hurricane / Of sky and sea; Poseidon's set a broken / Curse on me; I'm not the one who bleeds / With every odyssey."

The Accidentals became a sprightly trio several years back with the addition of drummer Michael Dause. On their latest, which the three bandmates co-produced in partnership with Jason Lehning, a specialist in roots-inflected alt-pop, they display equal interest in the focused musical forms of indie rock and pop and the expansive potential of orchestral arrangements, jam band open-endedness and impressionistic singer-songwriter expression. The fact that all of that is in the mix doesn't, in fact, result in long songs. Most, including the closing instrumental suite, clock in under four minutes. They're just busier, more dynamic songs, animated by the tensions between aesthetic possibilities.

They give "Memorial Day" its most transportive moments by executing a melodic counterpoint, first with cursive bow strokes, then with plucked strings. Late in the track "Nightlife," they layer shivering string vibrato over obdurate rhythms, and ratchet up the song's feeling of anxiety. In "Cut Me Down," they embroider on the starkness of White Stripes-style riffing with rhythmic precision and cleverly placed pizzicato parts, and in roughly three-and-a-half minutes' time, they steer "Stitches and Seams" from folk simplicity to baroque rock vamping.

The Accidentals devote plenty of time to their jammy inclinations, too, working a springy acoustic funk angle in "Arizona Stars," "Earthbound" and "KW," the latter of which features its namesake, the noodly, groove-driven one-man band Keller Williams, with whom they've toured. (Williams is one of three guests here, each of whom represent sensibilities the band identifies with, the other being abstract guitarist Kaki King and The Decemberists' Jenny Conlee.) No surprise that the song with the most embellished, jammiest-sounding title, "The Sound A Watch Makes When Enveloped In Cotton," leans that way, too.

As lyricists, The Accidentals favor poetic ambiguity, and their songs often have idealistic undertones. In the piano ballad "Crow's Feet," there's a confiding intensity to lines like, "All that I wanted was something to cradle my faith / Sometimes I will lose all I have just to see what remains." At such quiet moments, Buist and Larson, who share singing duties and have airy, agile voices, sometimes combine close-range intimacy and youthful urgency in a way that recalls Julien Baker. During the chorus of "Cut Me Down," which obliquely invokes the jazz standard "It Don't Mean A Thing (If It Ain't Got That Swing)," the bandmates are joined by Dause in artfully cool three-part harmony: "Don't cut me down / Just cause your voice is loud / It doesn't mean a thing / If your pendulum won't swing."

Like those lyrics suggest, The Accidentals know all about using finesse, and fun, to make an impact.