Accessibility links
In this Corner of the World In this beautifully rendered, meticulously researched anime, we view the bustling Japanese city through the eyes of a young daydreamer whose life is shattered by the inconceivable.

Haunting, Dreamlike 'In This Corner Of The World' Depicts Hiroshima, Before And After

Haunting, Dreamlike 'In This Corner Of The World' Depicts Hiroshima, Before And After 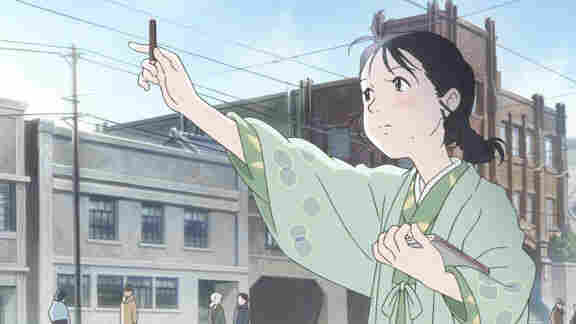 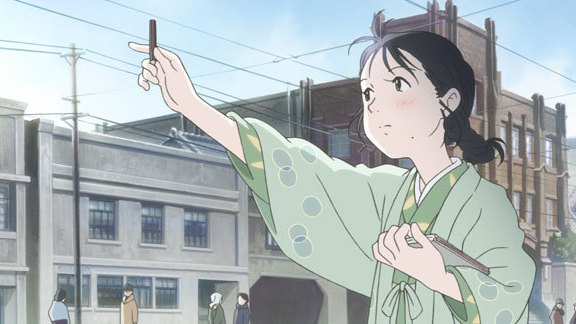 On the 72nd anniversary of the bombings of Hiroshima and Nagasaki, the Japanese anime In This Corner of the World lives in history but speaks more to the current moment than any of us might have dared to fear.

The "corner of the world" in question is Hiroshima's port city of Kure. It's the mid-'40s, a time period that includes the sustained U.S. and British naval attacks on the Japanese fleet stationed there, and culminates in the dropping of the atomic bomb. The film follows a family caught in the crosshairs of the 20th century's biggest weapon, yet it's too humble to offer much in the way of grand, sweeping statements. The message is there, anyway, as our own corners of the world turn once again to thoughts of the morality and the feasibility of nuclear warfare.

Based on a manga by Fumiyo Kono, the movie offers a simple tale of civilians whose nobility comes from trying to live their everyday lives in the midst of wartime. At its center is a winning heroine in a bright pink kimono, the young, exuberant daydreamer Suzu (voiced by Rena "Non" Nounen). Her lapses into fantasy allow the movie to have some fun at her (and our) expense. Suzu marries Shūsaku (Yoshimasa Hosoya), a Navy man she barely knows, and must leave her family in the village of Eba to move in with his in Kure. But when she returns to visit home several scenes into her marriage, there is a long fadeout, followed by Suzu slowly stirring awake. Was the marriage all just another dream? It wasn't, but the film floats by in a dizzying, half-awake state anyway, capturing shots of nature and housework in the same tone as the actual dreams. By now both of Suzu's families have grown used to the way she removes herself from reality, and they laugh it off gently.

In fact, the whole movie is gentle, at times practically sedate. It's more reminiscent of a Yasujirō Ozu drama than Studio Ghibli's crushingly sad bomb-aftermath anime Grave of the Fireflies. Director Sunao Katabuchi, a former assistant director on Kiki's Delivery Service who also adapted the script with Chie Uratani, operates with patience and just the lightest touches of absurdity, revealing Suzu's wandering mind to be that of a skilled painter. In her eyes, waves at sea become little white rabbits, and the rolling hills of Kure begin to swirl their colors together... until the air raids begin, shattering this state of calm.

As the air runs thick with sirens and all the husbands and brothers rush off to war, the story becomes one of survival, and of the fragile domesticity that connects the generations. Were it not for Suzu's boundless energy, the ever-present fear of total destruction would be too much to bear, but her spacey, can-do attitude provides just enough distraction to focus on household chores instead. Tasked with feeding her husband, in-laws, and young niece on ever-shrinking rations, Suzu turns to recipes of Emperors past and scours the landscape for anything edible. Searching for a creative outlet, she paints the Hiroshima landscapes in watercolor, only to be accused by the Japanese military of being a spy. Ultimately, though, even Suzu's daydreaming turns against her, as her momentary lapse in reflexes brings a horrific tragedy upon the family.

The bomb doesn't drop until the third act, at which point we are confronted with brief, harrowing imagery of the destruction. As the story is wispy by design, it's the images that are meant to stay with us, and they do. Most shocking is a mother who dies trying to rescue her young daughter from the wreckage; the daughter waits patiently by her mother's side for days as the body wilts and attracts flies. Eba is destroyed, and with it most of Suzu's family; as she wanders through the wreckage, desperate people grab her hoping she's their own lost relative. Her sister survives but falls horribly ill, lifting a purple-stained arm toward the ceiling while lying in bed, wondering if she'll ever get better. The film's softness, its overall decency, makes these bits all the more powerful.

In This Corner takes painstaking efforts to recreate the look and feel of Hiroshima before the bomb, and makes it into a bustling region of forgotten life. Katabuchi's years of research for the film, during which he interviewed survivors and combed through thousands of photographs, conclude in breathtaking hillsides and coastlines, filled with giant masses of people. Such thorough immersion is the best argument for why the film needed to be animated. To build an elaborate physical set of Hiroshima, only to destroy it later, would have turned the unspeakable horror to follow into Disneyland. But when hand-drawn, the setting can live simultaneously in the present world of the film and the collected memories and fantasies of its watchers.

Animation is always a kind of fantasy, after all, creating an unreal world that is always more fluid and vibrant than our own. And it's another kind of fantasy, now, to imagine a world just before nuclear warfare came into being.