Accessibility links
5 Big Unanswered Questions About The Russia Investigations Congress is gone. The president is on holiday. Justice Department special counsel Robert Mueller, however, is forging ahead. What comes next? 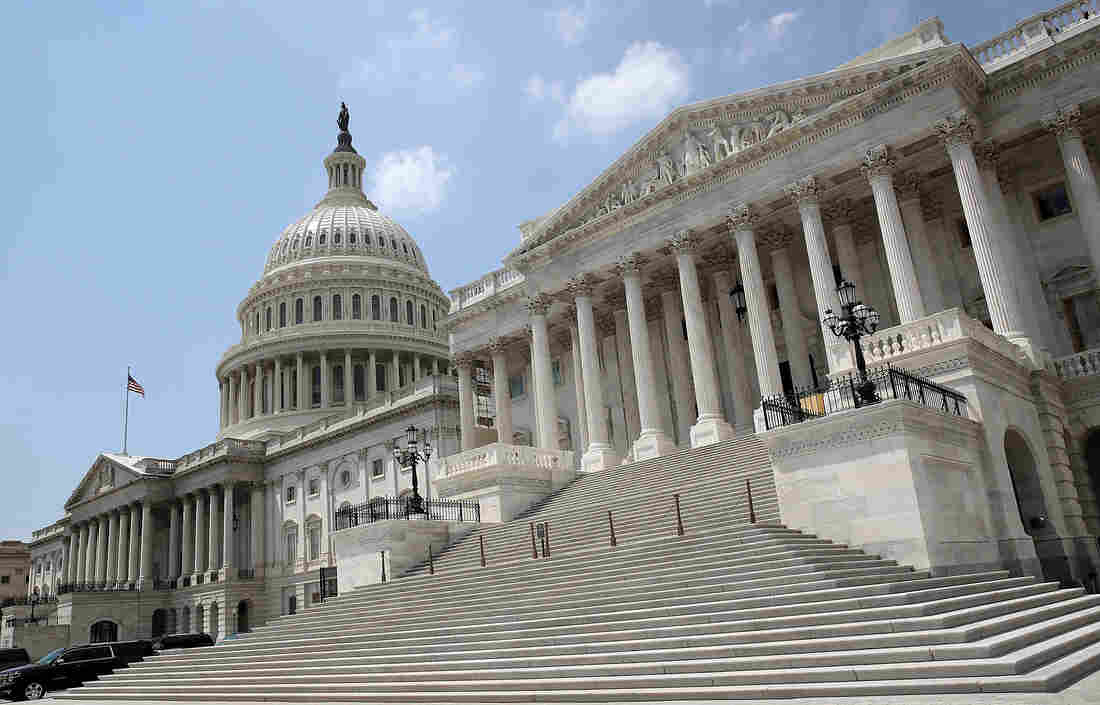 The Senate side of the Capitol building is shown on the last day of the summer session on Aug. 3. The Senate is scheduled to return from summer break on Sept. 5. Mark Wilson/Getty Images hide caption 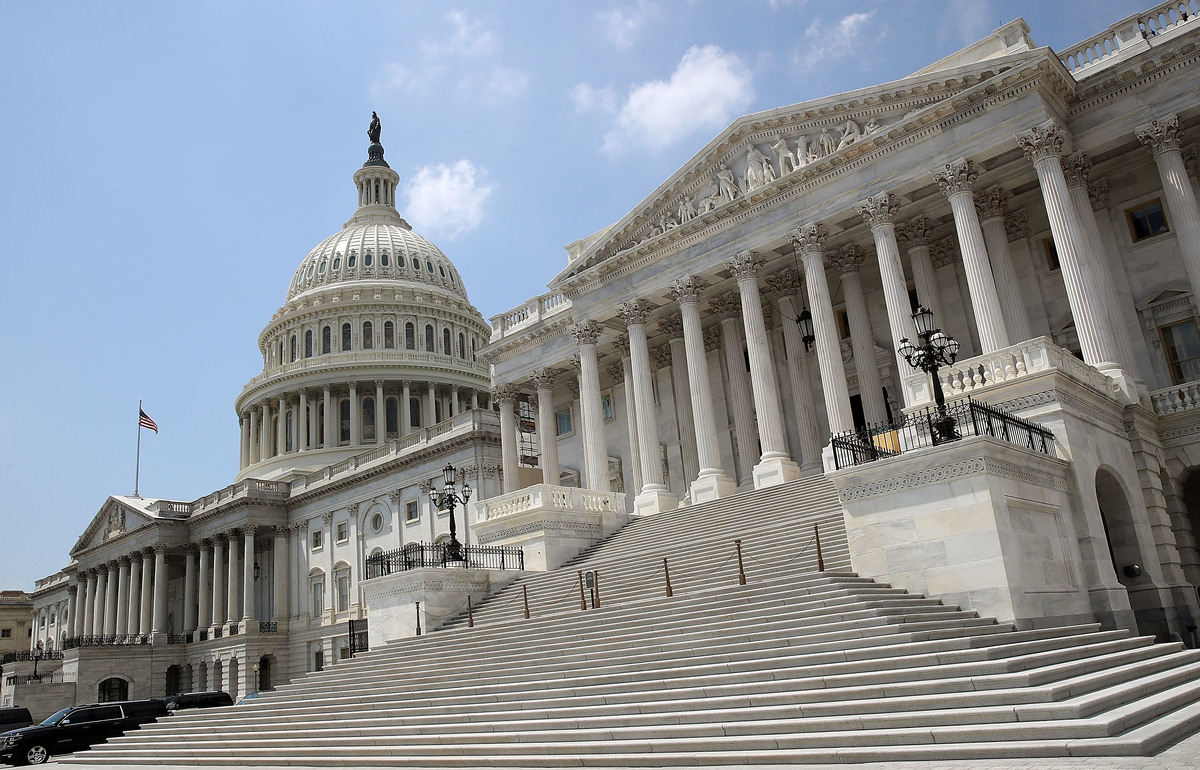 The Senate side of the Capitol building is shown on the last day of the summer session on Aug. 3. The Senate is scheduled to return from summer break on Sept. 5.

The Senate is long gone. The House? Splitsville. The president is at his golf club in New Jersey. Only the hardiest swamp creatures continue to scuttle in and out of the half-empty offices of late-August Washington, D.C.

His attorneys and investigators are using a federal grand jury to interview witnesses and issue subpoenas as they look into potential connections between President Trump's campaign and Russia's attack on the 2016 election.

News also emerged this week that FBI agents searched a home owned by former Trump campaign chairman Paul Manafort, and that Manafort and other people in Trump world, including Donald Trump Jr., had submitted hundreds of documents to the Senate Judiciary Committee.

If all that has been established, many other questions remain about Mueller's investigation — just who else is he interviewing? What specific materials does he want? — as well as the rest of the sprawling Russia imbroglio.

Does Mueller's use of the grand jury mean this game is almost over — or has everyone on the starting lineup even had a chance at bat? Does the FBI search warrant mean the tempo is increasing?

Mueller hasn't uttered more than a peep on the record since he's been in his job. Deputy Attorney General Rod Rosenstein has talked about the probe in general terms, but no one seems to have a sense about how far along this story might be — only that it's focused appropriately.

The more time Mueller takes, the greater the political pressure in Washington.

The leaders of the House and Senate Intelligence Committees said at one time they hoped to complete their investigations about Russia's election interference by the fall.

That may prove optimistic, but if they do wrap up their work and Mueller's investigation continues into the new year and beyond, it could turn into a big factor in the 2018 congressional midterm elections.

2. How much classified, or otherwise confidential, evidence will become public?

The Russia soap opera is frustrating to try to understand because it's an iceberg, only partly visible above the water.

Much more of the evidence remains hidden — teased by current or former intelligence officials but never detailed. One big example: electronic intercepts of communications between Americans and Russians allegedly involved in the interference.

"I was worried by a number of the contacts that the Russians had with U.S. persons," as former CIA Director John Brennan told the House Intelligence Committee this spring. "By the time I left office ... I had unresolved questions in my mind as to whether or not the Russians had been successful in getting U.S. persons involved in the campaign or not work on their behalf."

Mueller and the congressional intelligence committees have access to this evidence — believed to be intercepted emails or other messages from key Americans to key Russians.

"It's quite sensitive," he warned in May.

It also hasn't been described in anything like helpful detail. U.S. government officials have spoken about it anonymously to reporters — for example, CNN reported that Russians discussed conversations with then-Trump campaign chairman Manafort — but very little is solidly on the record.

Until it is, the widespread skepticism among many Americans about the theory of the case — that Donald Trump or some of his top campaign aides might have colluded with Russians who targeted the election — will likely endure.

3. What if Trump or associates did something other than "collude?"

So far, prosecutors haven't accused the president or anyone in his camp of doing anything wrong. But allegations about Trump's business practices, and those of his associates, swirled for years before his run for office.

Separately, members of the Senate Judiciary Committee and others have said they want to know whether Trump might have obstructed justice by firing FBI Director James Comey and taking other actions to try to protect himself or his aides — whatever the merits of the underlying DOJ investigation into possible collusion with Russia.

These issues aren't trivial, and they're all tied together with the original mandate for Mueller's investigation: Did, per press reports, Russian underworld figures have a relationship with Trump? If so, did Russian political leaders' awareness of these ties put the president in a position in which he might be subject to coercion?

Trump alluded obliquely to this thread of the story in his interview with The New York Times. He told the newspaper that he'd consider it a "breach" of Mueller's mandate for the special counsel to look into his or his family's business practices.

"I mean, it's possible there's a condo or something, so, you know, I sell a lot of condo units, and somebody from Russia buys a condo, who knows?" Trump said. "I don't make money from Russia."

That's not the account The New Republic, for example, gave in its story "Trump's Russian Laundromat," which described decades' worth of business relationships between the Trumps and Russian underworld figures who allegedly used the president's properties to launder illicit money.

The magazine reported, among other things, that at least 13 people connected to Russian organized crime have "owned, lived in and even run criminal activities out of Trump Tower and other Trump properties."

If Mueller's investigators substantiate organized crime connections to Trump himself, but no "collusion" with Russia's election mischief, would they reveal it? And, if so, what happens next?

4. Will the U.S. ever deploy any safeguards or countermeasures?

Although some Americans — particularly Trump supporters — don't believe the Russians attacked the election, Washington has officially rebuked Moscow over it. Members of Congress passed and Trump himself signed legislation imposing new sanctions and constraining the president's ability to lift them on his own.

Before he told supporters at a political rally in West Virginia that the story was a "hoax," Trump said in signing the sanctions bill that he supported "making clear that America will not tolerate interference in our democratic process, and that we will side with our allies and friends against Russian subversion and destabilization."

(The question of whether U.S. sanctions actually change Russia's policies is a different matter.)

But many members of Congress and outside advocates say Washington must do much more to deter future Russian interference in elections and respond in kind to Russia's war of information against the U.S.

State governments are bitterly frustrated with the federal government's follow-up to the election interference, from the awkwardness of the outreach by the Department of Homeland Security to a White House "voter fraud" commission widely viewed as partisan.

At the same time, former diplomats and intelligence officers complain that Washington has all but surrendered the battlefield of public opinion to Moscow. The Russian government is spending millions of rubles on both open and covert influence operations against the West, from cable TV networks to Twitter bots, but commentators argue the U.S. isn't even trying to level the playing field.

Two members of Congress asked why the State Department reportedly isn't using funds that have been set aside exactly for that purpose.

"Countering foreign propaganda should be a top priority, and it is very concerning that progress on combating this problem is being delayed because the State Department isn't tapping into these resources," complained Sen. Rob Portman, R-Ohio.

A State Department spokeswoman told reporters that Secretary of State Rex Tillerson plans to review global "engagement" following Trump's approval of the sanctions bill, but she acknowledged that much of the work now is focused on the Islamic State.

Clapper told lawmakers earlier this year he thought they should bring back a "U.S. Information Agency on steroids," targeting Russians and "giving them some of their own medicine much more aggressively than we've done now."

Will Congress heed his advice? Will it increase federal scrutiny of the security of state election systems and their vendors — or will the politics, along with all the other priorities that await lawmakers when they return in September, make it all too fraught?

"Generals are always fighting the last war," or so goes the military bromide.

One potential danger facing policymakers in Washington, however, is that whatever precautions and preparations they take ahead of big upcoming American elections, the threats from foreign powers may be different.

New technology might enable a whole new strain of "fake news" — real-looking videos, for example, in which public figures are made to appear to be saying things they never actually did.

Or a cyberattack might look completely different on Election Day 2020, for example, than the ones the Russians launched during the 2016 cycle: Instead of snooping in state records but permitting operations to go smoothly, attackers might try to erase millions of names from voting records, or register the same people in multiple places or otherwise sabotage the day itself to cause maximum disruption.

The news environment could be completely different, too.

Facebook and Google might get control of the online bots that promote or suppress stories seen by specific groups of users. But what if Russia gradually turns up the volume on its overt messaging? Online amplifiers and trolls already sometimes make common cause with some factions in the U.S., including, for example, in a recent, sustained attack against national security adviser H.R. McMaster.

If the presence of such a force is no longer a surprise by 2018 or 2020, will it become so loud it changes the campaign landscape? Will the states and the federal government be ready?

An earlier version of this story incorrectly attributed a quote about counter-messaging Russian propaganda. The original statement was issued jointly by Sens. Rob Portman, R-Ohio, and Chris Murphy, D-Conn.