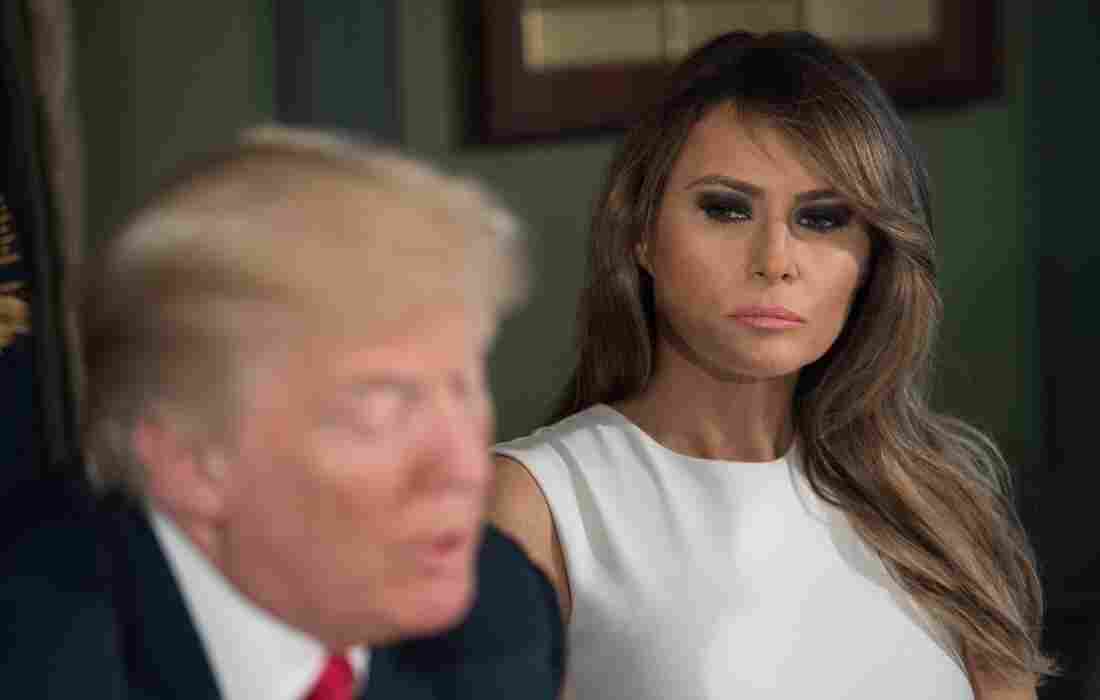 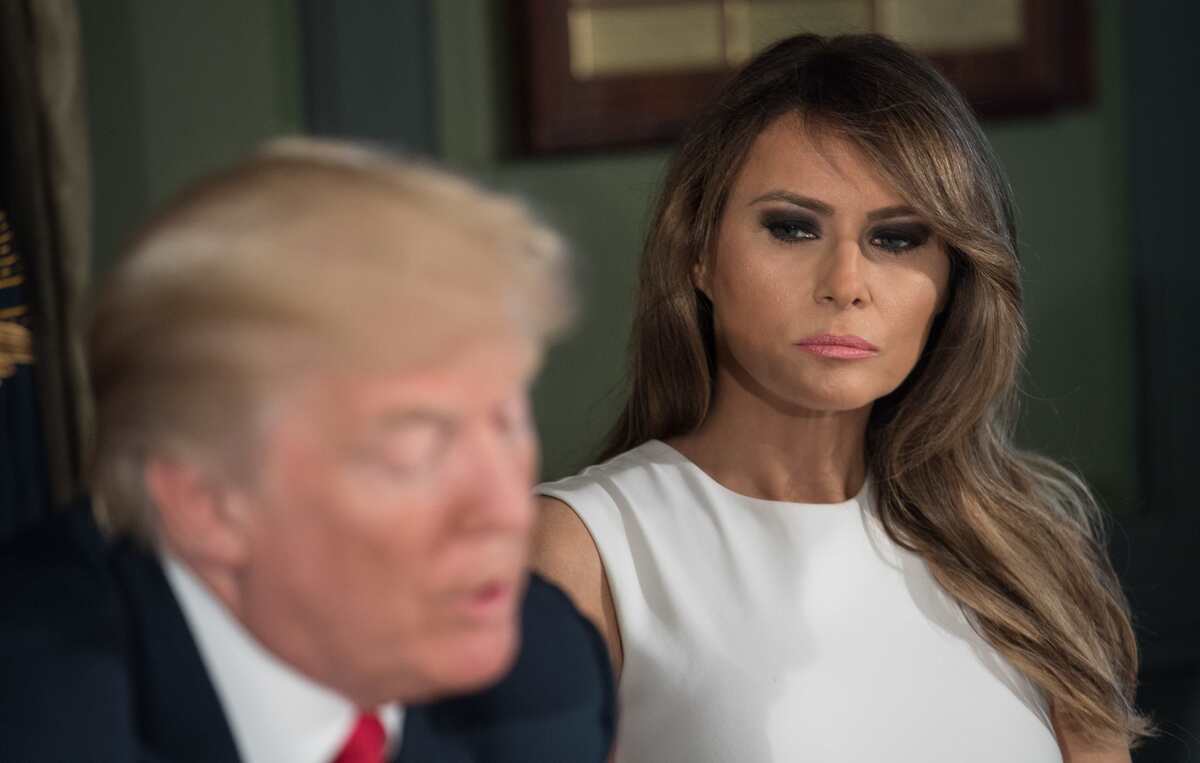 First lady Melania Trump listens to her husband, President Trump, speak at a meeting with administration officials on the opioid addiction crisis at the Trump National Golf Club in Bedminster, N.J., on Tuesday.

In a rare foray into policy discussions, first lady Melania Trump attended the president's briefing on the opioid drug epidemic on Tuesday. She also tweeted about the meeting, writing, "Opioids are destroying our youth/people. Mtg w @Potus & @SecPriceMD today to give my support to #STOPDRUGADDICTION."

At a briefing following the meeting, Price explained the decision. "We believe ... that the resources that we need, or the focus that we need to bring to bear to the opioid crisis at this point can be addressed without the declaration of an emergency," Price said. But Thursday, President Trump told reporters he would in fact begin working on declaring the crisis an emergency.

The first lady has so far remained publicly silent on many of the issues that have dominated political discourse, including her own stated anti-bullying cause. But her choice to wade into the conversation about drug abuse is reminiscent of another first lady: Nancy Reagan. The 40th FLOTUS's "Just Say No" campaign was aimed at America's youth and was considered the gentler arm of President Ronald Reagan's "War on Drugs." 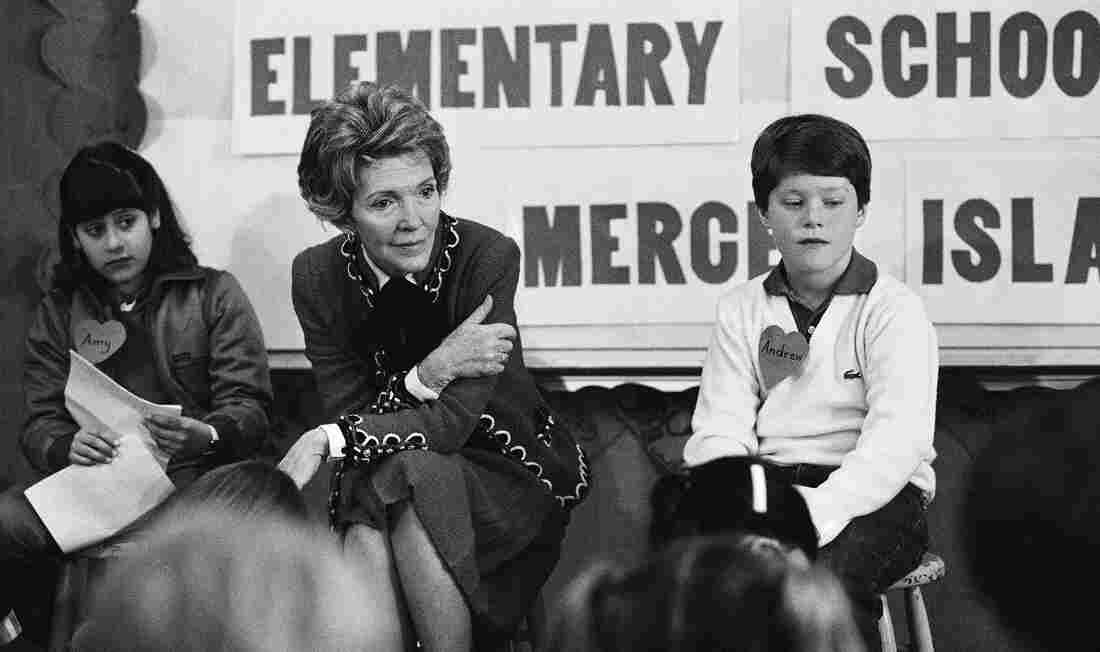 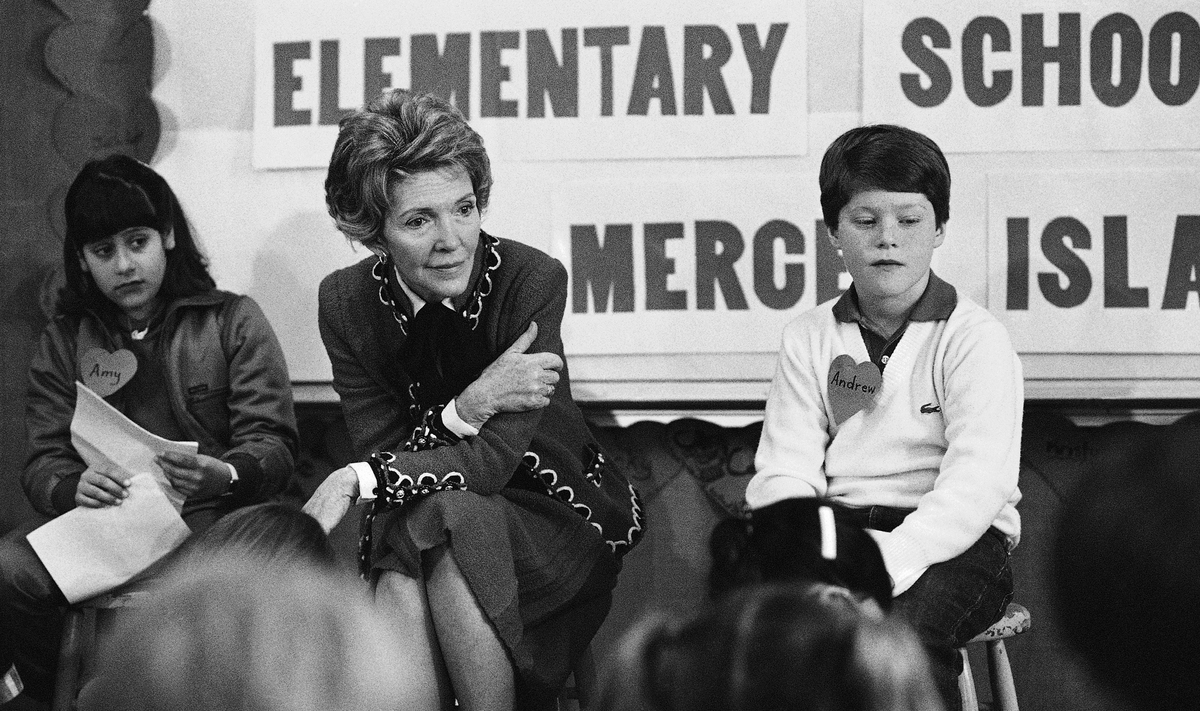 First lady Nancy Reagan sits with fourth- and fifth-graders at Island Park Elementary School on Mercer Island, Wash., where she participated in a drug education class in 1984.

With that in mind, here is a look back at the three-word tag-line and government-funded program that helped define much of the 1980s.

If nothing else, it may provide Mrs. Trump some inspiration in defining the shape and scope her support for the issue might take. Although research over the years has concluded the "Just Say No" campaign was largely ineffective.

Still, Reagan's campaign permeated popular culture — a potentially enticing approach for an administration that has sought to define its own narrative.

A former actress who appeared quite comfortable in front of the camera, Nancy Reagan beamed herself into living rooms across America to kick off her "Just Say No" campaign in a nationally broadcast message in September 1986. At that point, crack cocaine use was wreaking havoc across the nation's urban centers.

"Our job is never easy because drug criminals are ingenious," she said gravely, seated on a plush floral couch in the White House. "They work every day to plot a new and better way to steal our children's lives, just as they've done by developing this new drug, crack. For every door that we close, they open a new door to death."

It's not until the 4:57 minute mark that she utters the famous motto that has become a cultural touchstone for anyone who grew up during that decade.

"Say yes to your life and when it comes to drugs and alcohol, just say no," she says looking straight into the camera.

Mrs. Reagan also appeared on several television programs, from the 1988 World Series to popular sitcoms, including Diff'rent Strokes. In the special episode, Arnold goes undercover to report a story about drug use at his posh private school.

"There's no such thing as soft drugs or hard drugs," the first lady tells the class. "All drugs are dumb."

Setting the episode in a school dovetailed with the Just Say No clubs formed on school campuses across the globe.

As Reagan told the story, the club originated in Oakland, Calif., when a group of students decided to stand united against the daily peer pressure they faced to get high. And, according to the Ronald Reagan Library, by the end of the Reagan administration, more than 12,000 of the clubs had been formed worldwide.

Although she often projected a prim persona in her ruffle collared blouses and two-piece skirt suits, the first lady also teamed up with the world's most famous pop star at the time, Michael Jackson.

The King of Pop appeared in cartoon form on an episode of The Flintstone Kids during which the pre-historic children's adventures culminate in an animated rendition of Jackson's hit song, "Beat It" — with anti-drug lyrics. Here's a sample:

"Have a life that's happy, A future that's bright. You make it happen, drugs are wrong and you're right."

Michael Jackson performs his hit song, Beat It, as an anti-drug anthem.

The iconic pop star who lent his voice to Reagan's cause died of an overdose in 2009; the doctor who prescribed Jackson the drug propofol as a sleep aid was convicted and served time.

Another part of the anti-drug campaign were the haunting public service announcements sponsored by the Partnership for a Drug-Free America. These coupled with the D.A.R.E., the Drug Abuse Resistance Education program that brought law enforcement into classrooms, are deeply embedded in the memory of many who went to school in the 1980s.

Some of the 1980s most memorable PSAs sponsored by the Partnership for a Drug-Free America.

Although D.A.R.E. predated Mrs. Reagan's "Just Say No" campaign by three years, it operated under the same philosophy and benefited from millions of dollars in federal funding. At its peak, about 75 percent of schools ran D.A.R.E. programs.

Despite the massive injections of cash, it is widely considered a failure. Research has found, according to Scientific American, that teenagers who were enrolled in the program were just as likely as to use drugs as those who were not.