Accessibility links
Colin Kaepernick Has No Team After Activism On The Field Last season, quarterback Colin Kaepernick said he was protesting treatment of African-Americans. His supporters now say NFL owners are freezing him out. 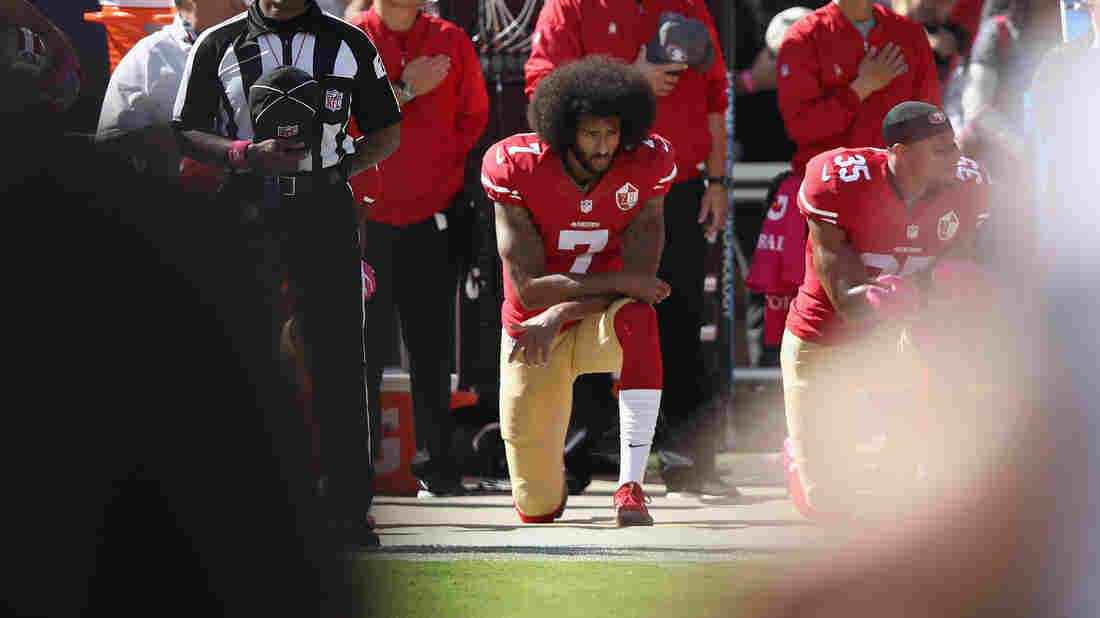 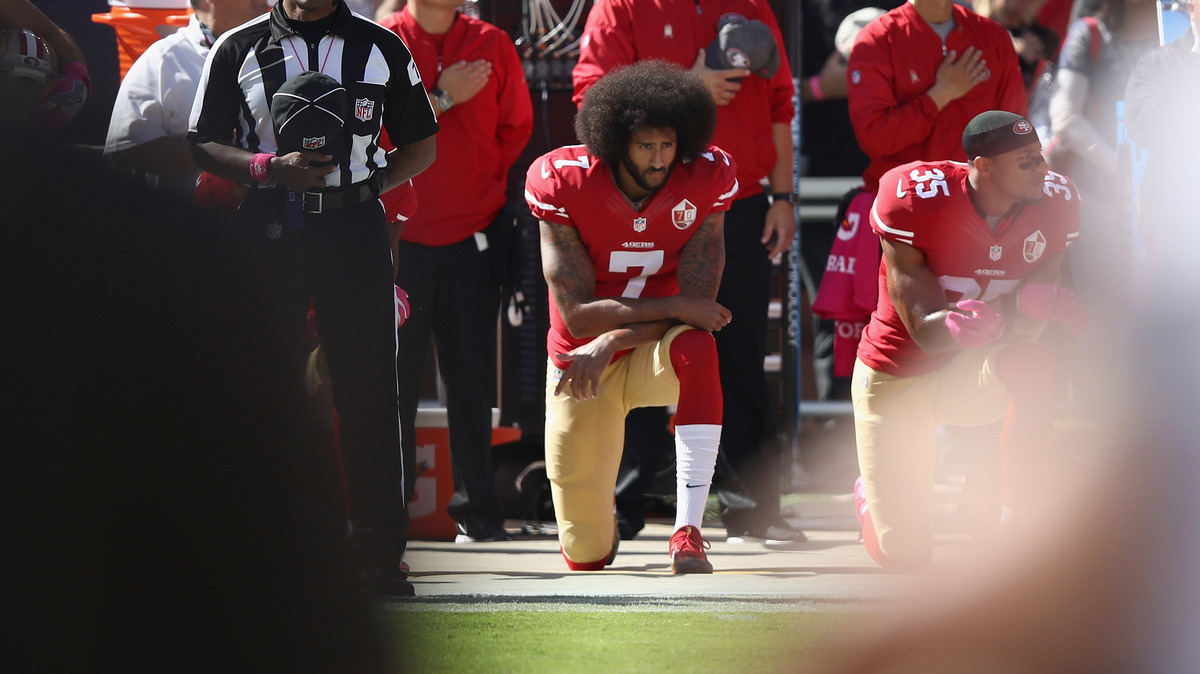 Colin Kaepernick kneels for the national anthem before a game last October in Santa Clara, Calif.

Less than a month away from the start of the regular season, NFL quarterback Colin Kaepernick remains a player without a team.

Kaepernick took a knee during the playing of the national anthem before games last season. He said he was protesting treatment of people in black communities during a time of great tension sparked by police shootings of African-Americans.

But his actions sparked outrage. Critics called his pregame protests anti-American, even accusing him of being against the military, a charge Kaepernick has repeatedly denied. Bringing awareness and sparking social change were his only motivations, he says.

His supporters now allege league owners are freezing out Kaepernick – not signing him because of his political beliefs.

Collusion among NFL owners is hard to prove. There's no evidence of any backroom deals being made. Recently, NFL Commissioner Roger Goodell was asked about the suspicions.

"Teams make decisions based on what's in the best interest of their team," Goodell said, adding, "and they make those decisions individually."

Teams make decisions based on what's in the best interest of their team, and they make those decisions individually.

Still, it's hard not to wonder as one quarterback after the next gets signed, and it's not Colin Kaepernick.

This week, the Miami Dolphins signed veteran Jay Cutler, who was retired and said his wife talked him into playing again. In late July, the Baltimore Ravens signed David Olson, who'd never played in the NFL but did see action in the Arena Football League. Seattle, the only team Kaepernick visited, eventually didn't sign him either. According to Seahawks head coach Pete Carroll, "He [Kaepernick] is a starter in this league. We have a starter, but he's a starter in this league and I can't imagine that somebody won't give him a chance to play."

Whether a starting player or backup, Kaepernick appears NFL-ready. He led the San Francisco 49ers to two NFC conference championship games. Following the 2012 season, he led the Niners to the Super Bowl, where they lost by 3 points to the Ravens.

That's ancient history to teams that want to win now. But Kaepernick also measures up based on more recent statistics. Last season he started 11 games for the 49ers, one of the worst teams in the NFL. They won only one of the games Kaepernick started. Still, he threw 16 touchdown passes and had only four interceptions. His touchdown-to-interception ratio ranked 7th in the NFL. A Washington Post article in May proclaimed Kaepernick "statistically superior to half of the NFL's backup quarterbacks."

When he declared himself a free agent in March, Kaepernick probably thought he had a good chance to sign with another team. Although he'd slipped from his form during those winning years with the 49ers, he's a proven quarterback and proven quarterbacks are a must for NFL success. No one knows that better than Kaepernick's fellow players, who are starting to wonder why he still doesn't have a job.

"My original position was I thought that the situation last year with him taking a knee didn't have anything to do with it [Kaepernick not being signed]," Seattle Seahawks wide receiver Doug Baldwin said last week. "After viewing what's going on, I've got to take that back. I definitely think that the league, the owners are trying to send a message of, 'stay in between the lines.' It's frustrating because you want to have guys who are willing to speak out about things that they believe in, whether you agree with it or not. But I think that's definitely playing a role now more so than I thought it was going to."

I definitely think that the league, the owners are trying to send a message of, 'stay in between the lines.'

"This is just some other teams being, quite honestly, cowards," Jenkins said, "to say that they're afraid of backlash to sign someone to make their team better when fans' input has never been in the equation when it comes to signing people in the past. It's certain owners' way of making an example out of [Kaepernick] to discourage anybody else from doing what he did."

Idea of collusion is "crazy"

In May, New York Giants co-owner John Mara, who's been with the team for nearly 25 years, waded into the Kaepernick controversy with comments about fan reaction to the quarterback's protests.

"All my years being in the league," Mara said, "I have never received more emotional mail from people than I did about that issue. [People wrote] 'If any of your players ever do that, we are never coming to another Giants game.' It wasn't one or two letters. It was a lot. It's an emotional, emotional issue for a lot of people, more so than any other issue I've run into."

Still, Mara this week denied any collusion by him or other owners.

"Anybody that thinks that there's been any conversations going on among teams about Colin Kaepernick is crazy," Mara said. "That just is not the case. I think there are certain issues obviously that go along with Colin Kaepernick and that may have scared some teams away, but there is absolutely no blackball going on here. I just don't see that at all."

There is absolutely no blackball going on here.

But Kaepernick's supporters say it's hypocritical for owners to be scared away by Kaepernick's politics. Considering the examples of bad behavior by players and others tied to the league in recent years.

"It doesn't really matter if it's collusion or culture," says sociologist Harry Edwards, "but you cannot have people [in the NFL] associated with double murders, dog fighting, rape, drug use, vehicular manslaughter and violence against women, from owners all the way down to rookie players ... [and] a man who takes a knee and says we can be better [as a society], cannot even be given a chance to compete for a roster spot."

Edwards is a professor emeritus in Sociology at UC Berkeley. He's been a staff consultant with the 49ers since 1985, has advised Kaepernick since the player's rookie season in 2011, and has been a leading figure at the nexus of sports, politics and activism for the past 50 years.

"I think the league's handling of [the Kaepernick situation] has been atrocious," Edwards says. "I think the sports establishment has learned nothing in the last 50 years, going back to Muhammad Ali."

I think the sports establishment has learned nothing in the last 50 years, going back to Muhammad Ali.

By vilifying Ali and his controversial political stands, "the sports establishment made Ali a martyr," says Edwards, "so he became widely celebrated."

Edwards says he sent an email to Roger Goodell "urging him not to make Colin Kaepernick a martyr."

"Let him play football," he says he told Goodell. "Let him do what he's going to do and manage it. We have to manage these things we can neither eliminate nor avoid."

Nearly 70 percent of the NFL's players are African-American. Edwards says if support grows among those players for Kaepernick and Kaepernick's message, "it could get too complicated for them [the league] to manage at any level."

At this point, Kaepernick appears to have moved beyond protest to programs, Edwards says.

"He [Kaepernick] has spent almost $2 million in money, time, material support. All kinds of things in order to wake people up that we can all do better."

"That seems to be something the NFL would want modeled," Edwards says. "Not only should they be embracing him [Kaepernick], they should be looking for his input. How do we [the NFL] get better in terms of how we manage these situations?"

The NFL did not respond to an NPR request for comment on the current situation with Kaepernick.

Kaepernick has not spoken publicly during this period of time; he hasn't weighed in on the discussion about why he doesn't have a job and possible collusion. Edwards hasn't spoken recently with Kaepernick but says he has talked to members of "his inner circle and management team." Through them, Edwards says Kaepernick is focused on getting a job in football.

Supporters, however, are speaking up. This week, several groups announced they'll hold a public rally in support of Kaepernick on Aug. 23 in front of the NFL's New York City headquarters. Among those announcing support for Kaepernick was filmmaker Spike Lee, although Lee denies he's organizing the rally.

And a new petition is targeting the NFL and its sponsors. Petition organizers are trying to get a million signatures by the start of the NFL regular season on Sept. 7.

And they're urging people to boycott NFL games if Colin Kaepernick doesn't play this season.