Accessibility links
Trump Chicken Activist Taran Singh Brar: White House Protest Isn't The End A giant Trump-look-alike chicken appeared behind the White House on Wednesday, created a television and Internet sensation for a handful of hours, then disappeared. Now we know why. 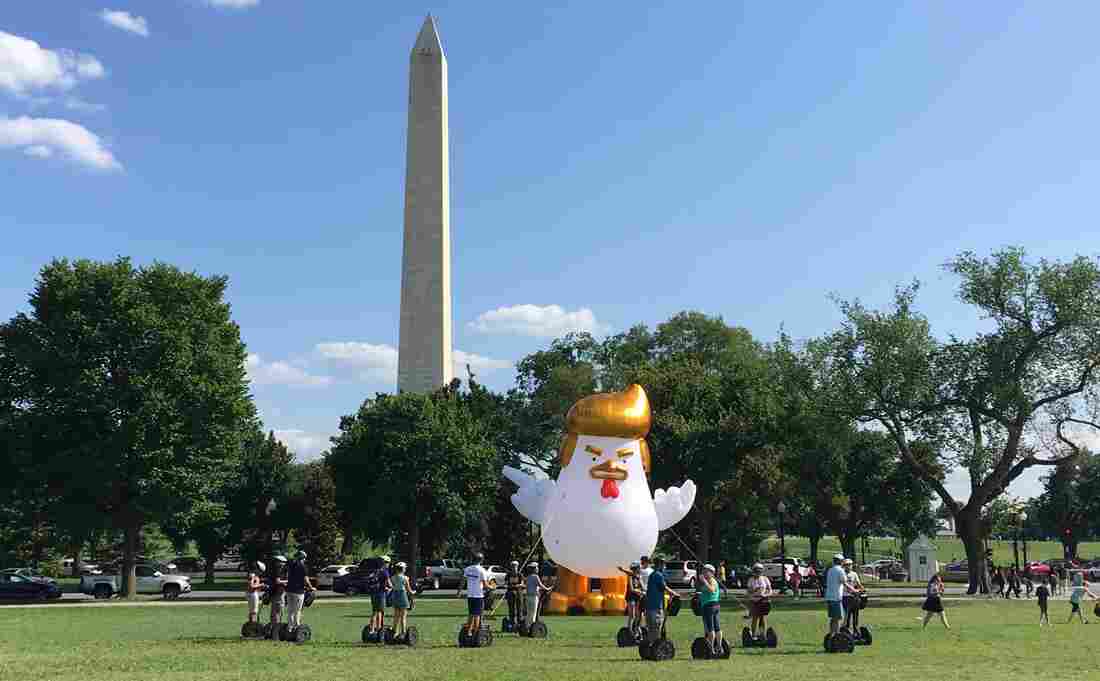 Documentary filmmaker Taran Singh Brar is using an inflatable chicken to protest the Trump administration. On Wednesday, it was perfectly positioned to appear in TV shots of the White House. Taran Singh Brar hide caption 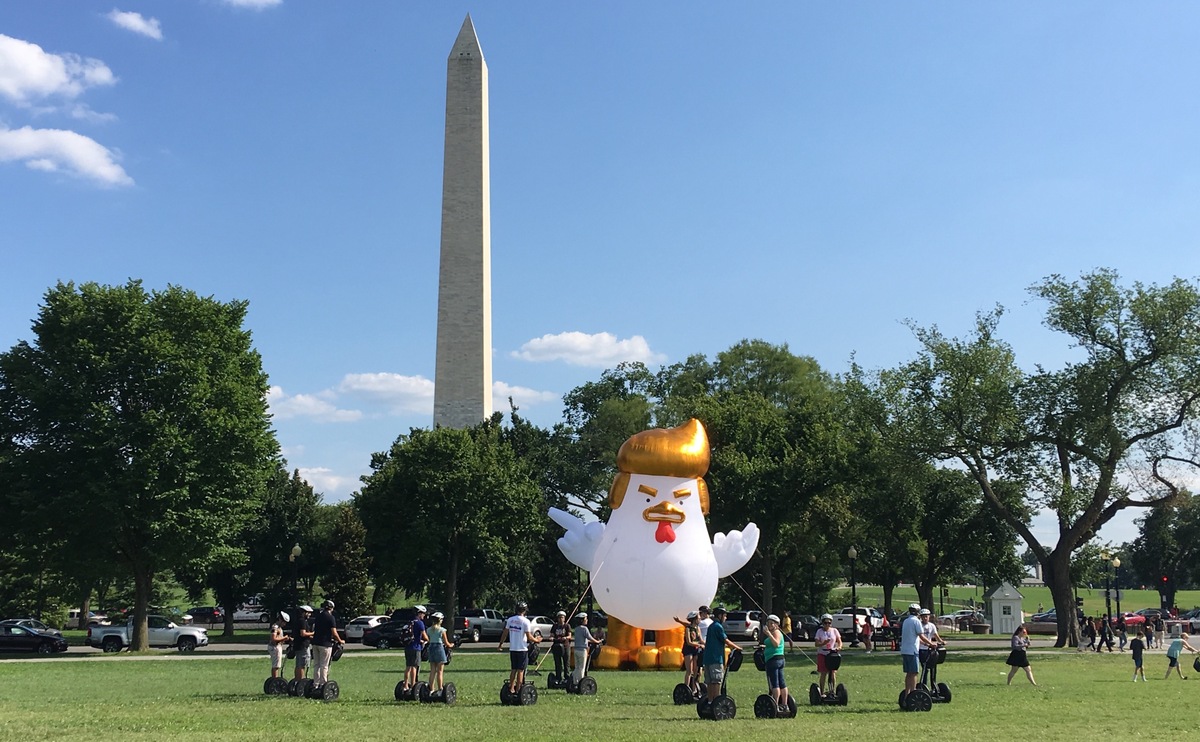 Documentary filmmaker Taran Singh Brar is using an inflatable chicken to protest the Trump administration. On Wednesday, it was perfectly positioned to appear in TV shots of the White House.

No, it was not a dream. There really was a 30-foot inflatable chicken behind the White House on Wednesday.

And, yes: The golden coiffed bird, which debuted in China late last year, bore an eerie resemblance to President Trump. What with its furrowed eyebrows, red wattle in place of the president's usual red tie, and the unmistakable swoopy hairdo.

"Obviously, it's a protest," said Taran Singh Brar, the man behind the bird behind the White House, calling from the bathroom of a bar in Washington, D.C.

"The messaging is that the president's too afraid to take action. He's a weak and insecure leader and playing a great game of chicken with North Korea," Brar said.

Plus, he added, "The president himself is so visually obsessed, that I know that something like this has potency. It's a visual protest."

Brar is not just anti-Trump — he's anti-the entire White House administration and all of the policies it is pursuing. He feels such fervent opposition, he said, that it has inspired the 31-year-old documentary filmmaker to take up political organizing.

This is not the first time that Brar, who lives in Orange County, Calif., has boxed up a giant chicken, crammed it into a heavy-duty cardboard box, and flown across the country with it in tow. Earlier this year, a 10-foot version of Don the Chicken — yup, that is the creature's official name — made its debut at a Tax March in Chicago.

Comparatively, that was an easy feat, according Brar.

Apparently, it took him four months "and thousands of [his] dollars" to hatch the White House plan. (Did you think there wouldn't be chicken puns?) Getting buy-in from the National Park Service and clearance from the Secret Service was a laborious process that he suspects is intended to dissuade the average person from taking on such an endeavor. But most of Brar's mental energy was expended on figuring out the chicken's best camera angles.

He said he spent hours studying CNN and other cable news channels that used the same shot with the White House in the foreground and the Washington Monument in the background.

"I understood that if I positioned it correctly and got the permit for the correct place, I would be in full view of the cameras. And, I did it in such a way that the White House wasn't blocking it, which I knew would be what would take it viral globally," he said.

Brar's plan worked perfectly. Within hours of erecting the fowl on the lawn, the bird had achieved ultimate made-it status: a hashtag of its very own.

And there was this unforgettable exchange between Fox News' Shepard Smith and Associated Press reporter Josh Lederman.

"Before we go, right over your shoulder. We see this shot all the time, but what is that?" Smith asked.

"Shep, it appears to be a very large chicken display," Lederman responded, managing not to crack a smile.

For those of you who missed the spectacle, fear not. Brar is planning another protest, "but it's going to be more of a visual feast."

While he is still waiting on a few permits, Brar is gearing up to put on a "mock military parade."

"That will include inflatable Russian weapons protecting dozens of Dons."