Accessibility links
As Events Evolved Saturday In Charlottesville, Va., So Did Messaging By Politicians Online After the president spoke about an "egregious display of hatred, bigotry and violence on many sides," some Republicans took him to task. Hillary Clinton, Joe Biden and Barack Obama tweeted as well. 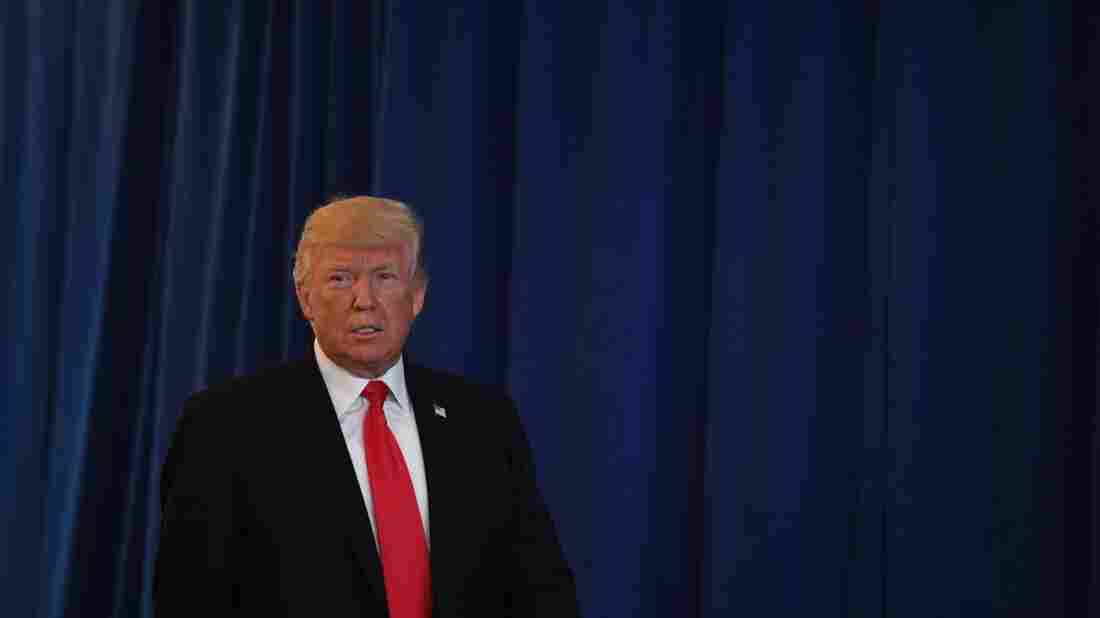 President Trump has been criticized for referring to "violence on many sides" in Charlottesville, Va., but not calling out white nationalists, during his remarks Saturday in Bedminster, N.J. Jim Watson/AFP/Getty Images hide caption 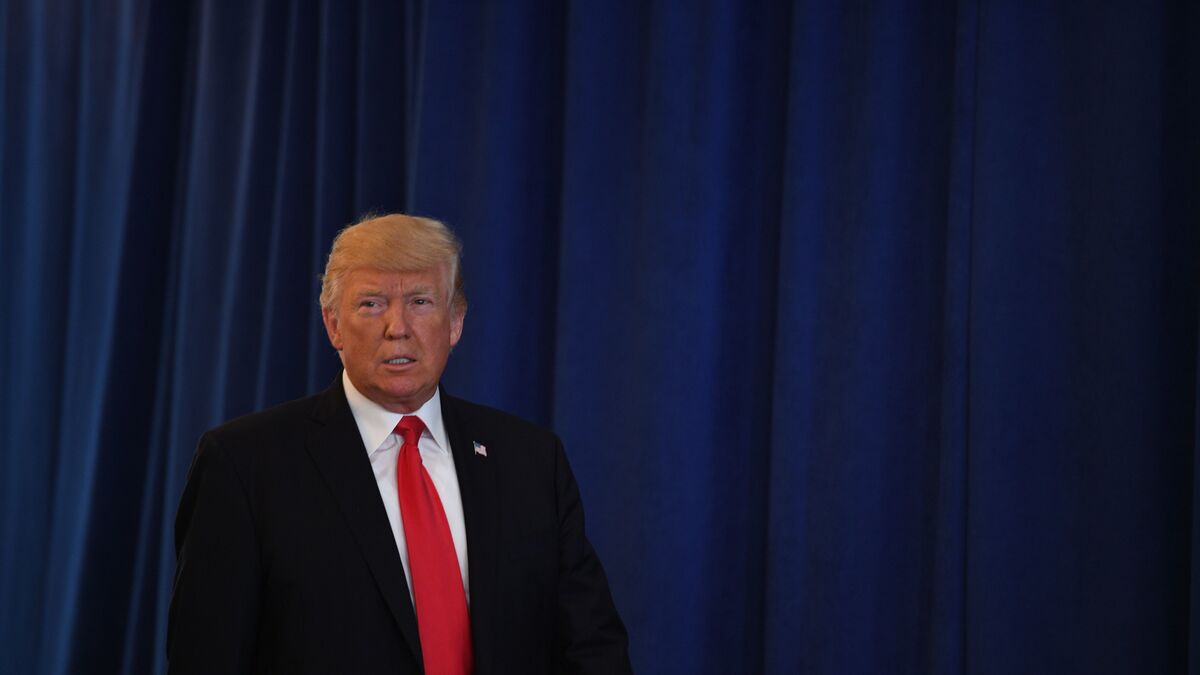 President Trump has been criticized for referring to "violence on many sides" in Charlottesville, Va., but not calling out white nationalists, during his remarks Saturday in Bedminster, N.J.

Political leaders used Twitter to respond to the violent confrontations that began Friday night in Charlottesville, Va.; continued with a "Unite the Right" rally that pitted members of the alt-right, Ku Klux Klan and neo-Nazi groups against anti-racism counterprotesters on Saturday; and turned deadly when a car plowed into a group of pedestrians.

3 Dead After Violence Linked To White Nationalist Rally In Virginia

Republican officials, from the president to members of the House and Senate, went online to speak out against bigotry and violence. But President Trump came under criticism from some members of his own party for not speaking out forcefully enough.

While the president remained silent on the white nationalist march across the University of Virginia campus Friday night, he reacted to the street brawls, fistfights and attacks with homemade pepper spray the next day in a broadly worded tweet Saturday afternoon.

"There is no place for this kind of violence in America," Trump said, "Lets come together as one!"

We ALL must be united & condemn all that hate stands for. There is no place for this kind of violence in America. Lets come together as one!

A White House spokesperson has defended the president's statement.

"The President said very strongly in his statement yesterday that he condemns all forms of violence, bigotry and hatred and of course that includes white Supremacists, KKK, neo-nazi and all extremist groups. He called for national unity and bringing all Americans together."

Others weighing in included Vice President Pence, who is heading Sunday on a six-day trip through Central and South America. "U.S is greatest when we join together & oppose those seeking to divide us. #Charlottesville," Pence tweeted.

I stand with @POTUS against hate & violence. U.S is greatest when we join together & oppose those seeking to divide us. #Charlottesville https://t.co/p76Y9xQCPL

The first official statement on Charlottesville came out of the East Wing of the White House, however. First lady Melania Trump tweeted nearly an hour before the president or vice president on Saturday. "...[L]et's communicate w/o hate in our hearts. No good comes from violence. #Charlottesville," she tweeted.

Our country encourages freedom of speech, but let's communicate w/o hate in our hearts. No good comes from violence. #Charlottesville

But the president's initial response quickly appeared outdated when a Dodge Challenger plowed into pedestrians, killing one woman and injuring at least nine others.

Just over an hour later, during televised remarks about a bill signing that had already been on his daily schedule, Trump addressed the intensifying situation in Charlottesville, which had been covered on cable news outlets throughout the day.

But he did not specifically address the vehicular attack. And he did not condemn the white nationalist and white supremacist groups that had arrived to protest the city's decision to remove a statue of Robert E. Lee, a hero of the Confederacy — and the president did not call out any of those groups by name. Instead, the president alluded to shared blame between protesters and counterprotesters for failing to maintain peace in Charlottesville.

"We condemn in the strongest most possible terms this egregious display of hatred, bigotry and violence on many sides. On many sides," Trump said.

I asked the White House what @POTUS meant by "on many sides." The response, from a WH official --> pic.twitter.com/pw3WZAMG1A

As the afternoon progressed, some members of his own party began to call out the president for his generic remarks and criticize him for not calling the vehicular attack a terrorist attack — like those that have occurred in recent years in European cities.

Mr. President - we must call evil by its name. These were white supremacists and this was domestic terrorism. https://t.co/PaPNiPPAoW

Very important for the nation to hear @potus describe events in #Charlottesville for what they are, a terror attack by #whitesupremacists

I urge the Department of Justice to immediately investigate and prosecute this grotesque act of domestic terrorism. pic.twitter.com/AwJLsfUEHl

Later on Saturday night, Attorney General Jeff Sessions issued a statement on the opening of a federal investigation into the day's incident in Charlottesville, Va. The statement said in part:

"The Richmond FBI Field Office, the Civil Rights Division, and the US Attorney's Office for the Western District of Virginia have opened a civil rights investigation into the circumstances of the deadly vehicular incident that occurred earlier Saturday morning. The FBI will collect all available facts and evidence, and as this is an ongoing investigation we are not able to comment further at this time."

Invoking the torch-lit march of mostly young, white men through the Univeristy of Virginia's campus on Friday night, House Democrats tweeted a photo of the Statue of Liberty with the message: "The torch of liberty outshines darkness and hate."

The torch of liberty outshines darkness and hate.🗽 pic.twitter.com/IZkxJHWdeV

Onetime Trump rival Hillary Clinton unleashed a tweetstorm Saturday almost immediately after Trump's televised remarks ended. "Now is the time for leaders to be strong in their words & deliberate in their actions," Clinton said, adding, "We will not step backward. If this is not who we are as Americans, let's prove it."

Riffing on Trump's controversial "many sides" comment, former Vice President Joe Biden had a simple message: "There is only one side. #charlottesville"

There is only one side. #charlottesville

Finally, former President Barack Obama weighed in Saturday evening, as the events of the day appeared to have calmed down both in Charlottesville and online. " 'No one is born hating another person because of the color of his skin or his background or his religion,' " Obama tweeted, adding, "'People must learn to hate, and if they can learn to hate, they can be taught to love ...'"

"No one is born hating another person because of the color of his skin or his background or his religion..." pic.twitter.com/InZ58zkoAm

"...For love comes more naturally to the human heart than its opposite." - Nelson Mandela

Obama attributed the quote, which he had posted for his more than 90 million followers, to Nelson Mandela; it is from the South African leader's 1994 autobiography Long Walk to Freedom.