Accessibility links
'Ghost Of The Innocent Man' Chronicles Justice Too Long Delayed Benjamin Rachlin's crisply-written new book tells the story of Willie Grimes, who spent 24 years in prison for a crime he didn't commit — and the tortuous legal struggle that eventually freed him. 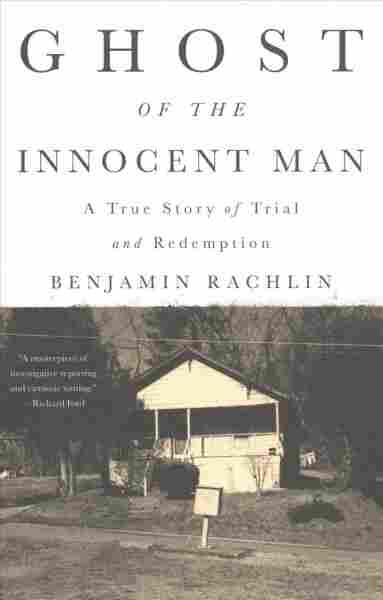 Ghost of the Innocent Man

A True Story of Trial and Redemption

Martha Anne Toll is the Executive Director of the Butler Family Fund; her writing is at www.marthaannetoll.com, and she tweets @marthaannetoll.

Innocence cases spotlight the many corruptions of our justice system: Mistakes beget mistakes — some intentional, some not. An epic bureaucracy protects a deeply flawed system. Thousands are wrongfully convicted. The National Registry of Exonerations calculates that over 18,000 years have been lost by innocent people serving time.

In 1987 Grimes was a textile worker who had a second job delivering furniture. He had no money, but his life was far from impoverished. He was close to family and friends, and had a long-term girlfriend. Then, a 69-year-old widow named Carrie Elliott was raped in her Hickory, N.C. home. With the incentive of a $1,000 reward, Elliott's neighbor falsely accused Grimes; despite a seemingly airtight alibi and no record of violent crime, he was arrested and charged. His physical features didn't match the victim's description: Grimes had missing fingertips, a large raised scar below his collarbone, and was 35 pounds lighter than the assailant. DNA analysis was in its infancy, and Grimes' lawyer's request for it was ignored. Grimes was convicted and sentenced to life.

After Wrongful Conviction, Three Lifetimes Spent With Hope In Check

Rachlin painstakingly renders Grimes' life behind bars. He's angry and lonely and depressed. He loses his appeal. He works with a jailhouse lawyer, then becomes one himself. He writes endless letters, begging people to take up his cause. He's transferred from prison to prison and back again, signing up for every program that will demonstrate he's a model prisoner, advance his 12th-grade education, and better his chances for parole. His siblings die; he loses his friends. Frequent psychological tests note he's "still" protesting his innocence. He develops prostate cancer. He joins the Jehovah's Witnesses.

Months, years, decades go by. Grimes arrives at a truth:

"Nothing in a world like this could be relied on; it was all only chance. He grasped now he had been wrong to think some influential person might help him. There was no such person, there was no such influence. He could trust no one and nothing but himself."

Meanwhile, a parallel story inches forward. Activist Christine Mumma has a hunch that all is not right with North Carolina's justice system. Like Grimes, she's in it for the long game. She goes to law school and becomes an advocate — a dog with a bone when it comes to the perils of false convictions — and finds a champion in North Carolina's conservative Chief Justice I. Beverly Lake. While Grimes languishes behind bars, there are heroes on the outside, lawyers and judges who care about the integrity and trustworthiness of the courts. They're paying attention to high profile exonerations around the country, and recognize that "an innocent person can be convicted even when no one did anything wrong."

Deploying the same precision with which he documents Grimes' prison life, Rachlin recounts the arduous and complex work to move the wheels of justice. 19 years after Grimes' arrest, the North Carolina General Assembly passed a bill to establish an Innocence Inquiry Commission; Chris Mumma's fingerprints were all over it.

Read Rachlin's Ghost of the Innocent Man to follow the twisted path that led Chris Mumma to pick up Grimes' file, ultimately exposing the use of outdated photos to mis-identify the perpetrator, the failure to fingerprint relevant parts of the crime scene, exculpatory evidence destroyed, contorted "science" involving a single hair, and more.

But don't read for the gripping story alone. Willie Grimes spent 24 years behind bars for a crime he didn't commit, while the real perpetrator continued to offend. Shouldn't we be better than this?