Accessibility links
Trump Supporter On Charlottesville: 'He Called For Unity, I Never Saw Obama Call For Unity' The White House tweaked its reaction to the events in Charlottesville, Va., saying the president condemns white supremacists, KKK, neo-Nazi and all extremist groups. Trump supporters are reacting. 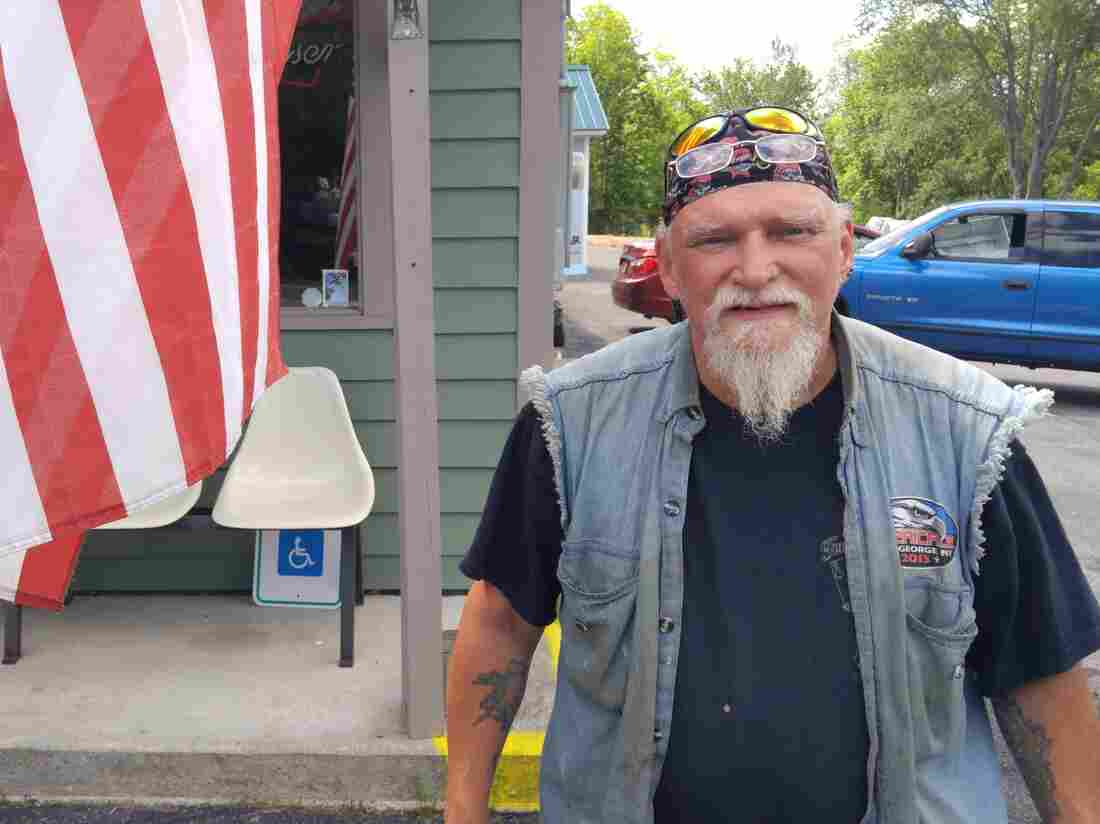 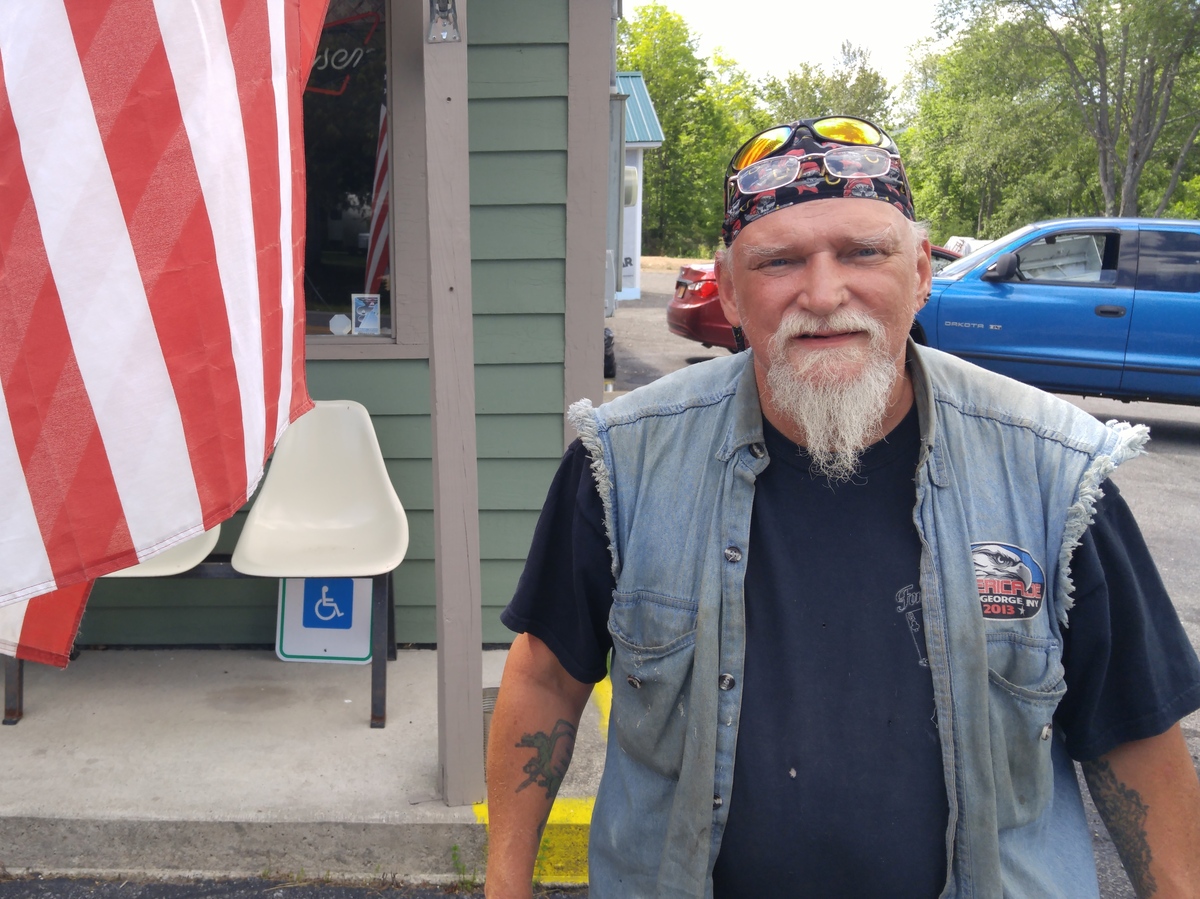 Christopher LaMothe in Mineville, N.Y., says he hates Nazis and white supremacists, but he also thinks Black Lives Matter is just as bad.

One of the things we've learned over the past year is that events like the violence in Charlottesville, Va., are often viewed very differently in different places. Places like rural white communities that make up President Trump's most loyal base. One such place is Mineville, N.Y., a tiny Rust Belt town in the Adirondack Mountains north of Albany, where on Sunday afternoon we found Christopher LaMothe sitting on a bench.

In these small towns, events like what happened in Charlottesville are also portrayed differently in the conservative media. When Trump first responded to the deadly violence in Charlottesville, he blamed the rioting and bloodshed on "many sides," failing to name the white supremacists and neo-Nazis who organized the march. It sparked a huge backlash even from many Republicans.

But the president's words sat just fine with LaMothe. "I think when he called for the unity of the country, that should have been what was pounded on," LaMothe said in between taking a drag on his cigarette. By pounded on, LaMothe meant respected. He loves Trump and says the president never gets a fair shake from the media.

He says he hates the idea of neo-Nazis and recalls when growing up, he had friends who were black. But now he thinks the white guys he saw on his TV marching in Charlottesville have some reasonable arguments.

"This is a different white supremacy movement than before, because I don't think whites are saying, 'Well, we're better.' They're saying why can't we be treated all as equal?"

LaMothe thinks affirmative action programs should be scrapped. He also thinks neo-Nazis who sparked mayhem in Charlottesville are no worse than a lot of activist groups on the left. "I didn't hear anything from Barack Obama about Black Lives Matter and that was another hate group," he says.

In fact, Black Lives Matter has no history of violence or racial bigotry comparable to America's far-right militias, neo-Nazis or Klan groups. But that's not how this plays even in fairly mainstream conservative media, where liberal groups are often portrayed as radical or dangerous.

"I think the president nailed it, condemned in the strongest possible terms hatred and bigotry on all sides," Pete Hegseth, co-host of Fox and Friends, said during a broadcast Sunday. He echoed the narrative that white nationalist groups have legitimate concerns and compared them to groups on the left.

Antifa means "anti-fascist." It's a kind of catch-all name for far-left students and anarchists who often stage counterprotests in cities where far-right conservatives march or stage rallies. And their approach is confrontational. In Charlottesville, Antifa protesters chanted that people should "punch a Nazi in the mouth."

The left-wing movement is tiny, but it has become a major fixation for the far right. Over the weekend, a reporter from the media site Breitbart, which has close ties to the White House, urged Virginia Gov. Terry McAuliffe to criticize Antifa protesters, as well as neo-Nazis.

"Governor, will you condemn Antifa as well?" he asked repeatedly.

People who speak for the Antifa movement acknowledge they sometimes carry clubs and sticks. They have clashed in recent months with police. But James Anderson, who runs an anarchist website, rejects comparisons between the militant left and white supremacists, pointing out that their goals and aims are far different.

"I mean the idea that we should organize against the Klan or stop the Klan or stand up to the Klan, most people would be like, 'Yeah, obviously,' " Anderson says. "The Klan is bad. It kills people; it lynches them."

But for many rural white conservatives, it's not that clear. Cultural and political lines that once seemed sharply drawn to a lot of Americans just aren't anymore. In their media and in their worldview, groups like Black Lives Matter seem just as radical as the Klan.

When asked if it wouldn't be better had Trump just condemned neo-Nazis and white supremacists in Charlottesville using blunt language, LaMothe shook his head impatiently.

"He's in a no-win situation," LaMothe said. "What he did do — and no one's giving him credit for that — he called for unity. I never saw Obama call for unity."

In fact, Barack Obama did call for national unity numerous times during his presidency, especially during times of racial conflict and violence. That message was often downplayed or ignored in much of the conservative media that shapes opinion in rural America.

NPR's Maquita Peters produced this story for the Web.