Accessibility links
On Charlottesville Violence, Trump Calls Out White Supremacists After Criticism Almost 48 hours after violence engulfed Charlottesville, Va., President Trump called out white nationalist groups by name. He had been criticized for not doing so in his initial remarks on Saturday. 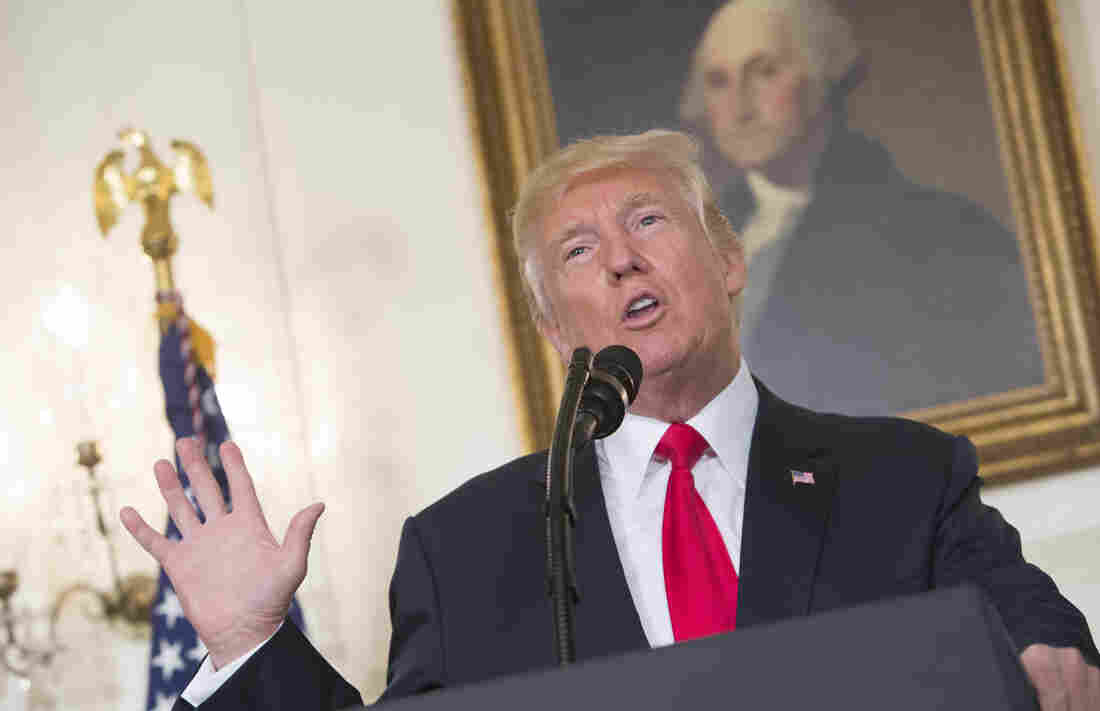 President Trump makes a statement on the violence this past weekend in Charlottesville, Va., at the White House on Monday. Getty Images hide caption 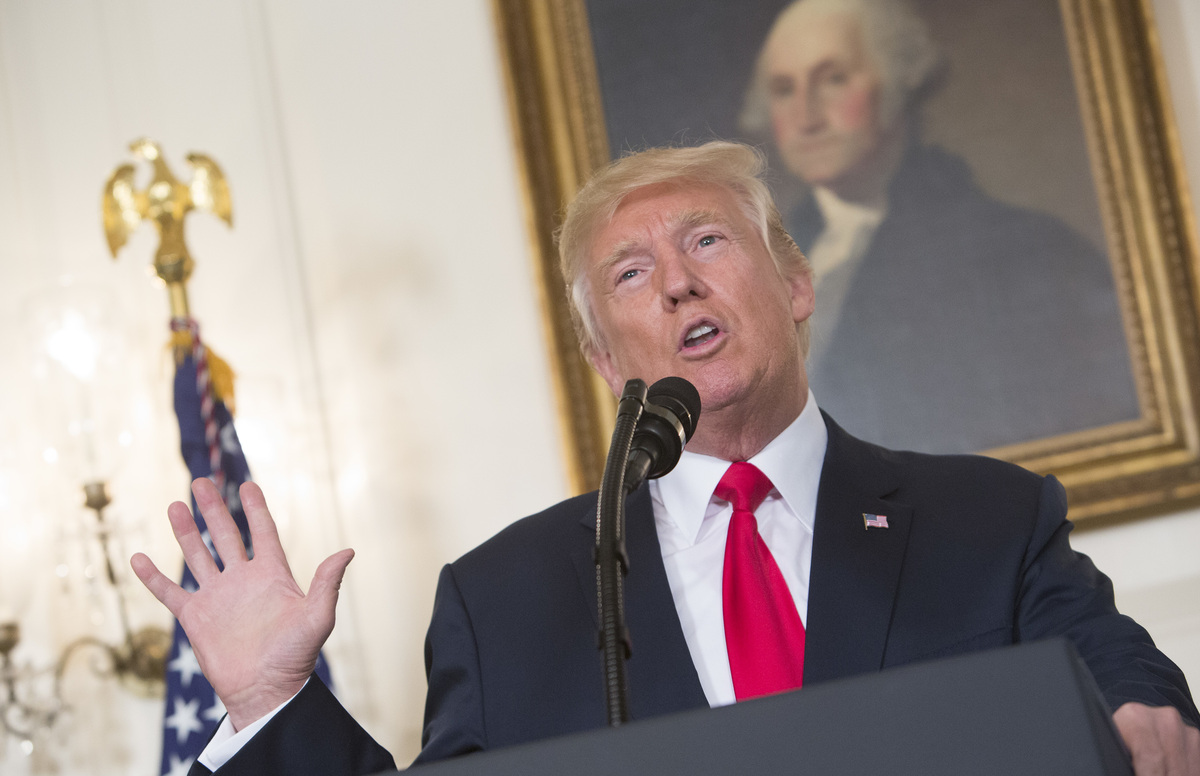 President Trump makes a statement on the violence this past weekend in Charlottesville, Va., at the White House on Monday.

"Racism is evil, and those who cause violence in its name are criminals and thugs, including the KKK, neo-Nazis and white supremacists and other hate groups that are repugnant to everything we hold dear as Americans," the president said from the White House.

Trump began his remarks talking about his economic accomplishments and plans for trade negotiations before turning his attention to the events over the weekend in Virginia. After the Charlottesville City Council had voted earlier this year to remove a statue of Confederate Gen. Robert E. Lee from one of its parks, white nationalist groups — including white supremacists, the alt-right, the Ku Klux Klan and neo-Nazis — descended on the city for a "Unite the Right" rally.

In Charlottesville, White Nationalists Try To Seize An Elusive Spotlight

On Friday night, they marched on the normally sleepy college town, home to the University of Virginia, carrying torches. On Saturday conditions turned deadly as hundreds of the white nationalists, some carrying Confederate flags and shields and others in militia-like gear, clashed with counterprotesters in the city streets.

At one point a silver Dodge Challenger, allegedly driven by 20-year-old James Alex Fields Jr. of Ohio, rammed into a street filled with counterprotesters. Heather Heyer, 32, was killed, and at least 19 others were injured. Fields was charged with one count of second-degree murder, three counts of malicious wounding and one count of hit and run.

President Trump expressed sympathy to Heyer's family as well as to the families of Virginia State Troopers Lt. H. Jay Cullen and Berke M.M. Bates, who died when their helicopter that was patrolling Saturday's event crashed.

"These three fallen Americans embody the goodness and decency of our nation," Trump said. "In times such as these, America has always shown its true character, responding to hate with love, division with unity, and violence with an unwavering resolve for justice."

Trump spoke after meeting with newly installed FBI Director Christopher Wray and Attorney General Jeff Sessions at the White House. He said that the Department of Justice had opened a civil rights investigation into the car attack.

"To anyone who acted criminally at this weekend's racist violence, you will be held fully accountable. Justice will be delivered," the president said.

Sessions told ABC News on Monday morning that the car crash that had killed Heyer "does meet the definition of domestic terrorism."

"You can be sure we will charge and advance the investigation towards the most serious charges that can be brought, because this is unequivocally an unacceptable, evil attack," he said.

The president's condemnations may be too little, too late for those who criticized Trump's initial remarks — and Trump may have missed a critical moment to be the nation's healer in chief.

Sen. Tim Scott, R-S.C., the Senate's only black Republican, said in a statement later Monday that while Trump's remarks earlier that day were "clear and specific," those words "would have been more impactful on Saturday." In an op-ed in USA Today, which did not mention Trump, Scott wrote, "Our response to the events in Charlottesville, Va., should mirror our response to the murders at Mother Emanuel Church in Charleston. Condemnation of racism. Swift justice for a terrorist. And unity for the community that grieves."

My statement on #Charlottesville: pic.twitter.com/u0ETKWKWOl

On Saturday, Trump claimed that the clashes were a result of "hatred, bigotry and violence on many sides." Top Republicans, among others, quickly criticized him for not calling out by name the white supremacists, alt-right, KKK and neo-Nazi groups that began the protests.

"Mr. President — we must call evil by its name. These were white supremacists and this was domestic terrorism," Sen. Cory Gardner, R-Colo., who heads up the GOP Senate campaign committee, tweeted on Saturday.

The White House put out an unsigned statement on Sunday morning, saying that, "The President said very strongly in his statement yesterday that he condemns all forms of violence, bigotry and hatred and of course that includes white Supremacists, KKK, neo-nazi and all extremist groups. He called for national unity and bringing all Americans together."

Vice President Pence had gone further than the president in his own comments, telling reporters Sunday night while traveling in Colombia, "We have no tolerance for hate and violence from white supremacists, neo-Nazis or the KKK. These dangerous fringe groups have no place in American public life and in the American debate, and we condemn them in the strongest possible terms."

Trump has been blamed for being slow to criticize white supremacist groups in the past — even as he regularly attacks other targets on Twitter. During the 2016 campaign, Trump came under fire for not immediately disavowing the endorsement of David Duke, a former KKK grand wizard.

Duke, who attended the march in Virginia, said on Saturday that participants' aim was "to fulfill the promises of Donald Trump. That's what we believed in. That's why we voted for Donald Trump, because he said he's going to take our country back."

Duke later responded to one of the president's tweets condemning the violence by saying, "I would recommend you take a good look in the mirror & remember it was White Americans who put you in the presidency, not radical leftists."

Thank you. I'm in Washington today to meet with my economic team about trade policy and major tax cuts and reform. We are renegotiating trade deals and making them good for the American worker and it's about time. Our economy is now strong. The stock market continues to hit record highs, unemployment is at 16 year low and businesses are more optimistic than ever before. Companies are moving back to the United States and bringing many thousands of jobs with them. We have already created over one million jobs since I took office. We will be discussing economic issues in greater detail later this afternoon but based on the events that took place over the weekend in Charlottesville, Virginia, I would like to provide the nation with an update on the ongoing federal response to the horrific attack and violence that was witnessed by everyone.

I just met with FBI Director Christopher Wray and Attorney General Jeff Sessions. The Department of Justice has opened a civil rights investigation into the deadly car attack that killed one innocent American and wounded 20 others. To anyone who acted criminally in this weekend's racist violence, you will be held fully accountable. Justice will be delivered. As I said on Saturday, we condemn in the strongest possible terms, this egregious display of hatred, bigotry and violence. It has no place in America.

And as I have said many times before, no matter the color of our skin, we all live under the same laws. We all salute the same great flag. And we are all made by the same almighty God. We must love each other, show affection for each other, and unite together in condemnation of hated, bigotry and violence. We must rediscover the bonds of love and loyalty that bring us together as Americans.

Racism is evil. And those who cause violence in its name are criminals and thugs, including the KKK, neo Nazis, white supremacists and other hate groups that are repugnant to everything we hold dear as Americans. We are a nation founded on the truth that all of us are created equal. We are equal in the eyes of our creator. We are equal under the law. And we are equal under our constitution.

Those who spread violence in the name of bigotry strike at the very core of America.

Two days ago, a young American woman, Heather Heyer, was tragically killed. Her death fills us with grief and we send her family our thoughts, our prayers and our love. We also mourn the two Virginia state troopers who died in service to their community, their commonwealth and their country. Troopers Jay Cullen and Berke Bates exemplify the very best of America and our hearts go out to their families, their friends and every member of American law enforcement.

These three fallen Americans embody the goodness and decency of our nation. In times such as these, America has always shown its true character, responding to hate with love, division with unity, and violence with an unwavering resolve for justice.

As a candidate, I promised to restore law and order to our country and our federal law enforcement agencies are following through on that pledge. We will spare no resource in fighting so that every American child can grow up free from violence and fear. We will defend and protect the sacred rights of all Americans and we will work together so that every citizen in this blessed land is free to follow their dreams in their hearts and to express the love and joy in their souls.